Continuing knee problems means that I have to keep picking easy hills with good tracks so this time it was Meall Tarsuinn to the north of the Falls of Monzie. It was forecast to be a hot day so I left Glasgow at 7am and parked at the beginning of the track at NN890262. I started walking at 8.30 when it was still refreshingly cool. It was easy walking on the track and the scenery all around was very green, lush and pleasant. 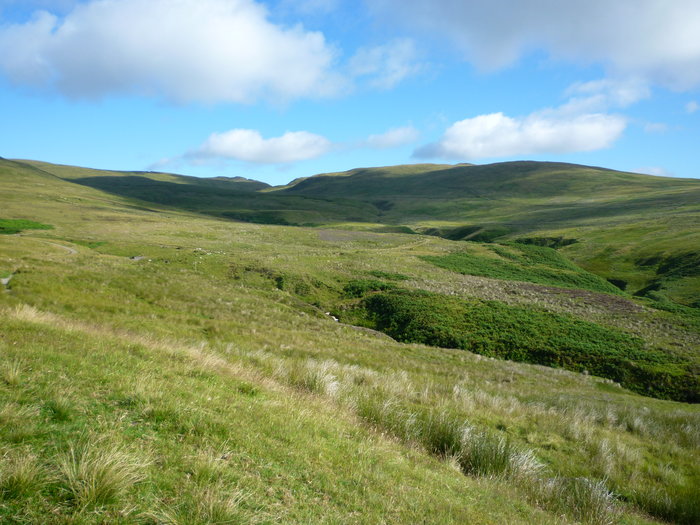 Meall Tarsuinn in the distance

The track led to a few little dams and I had go in a bit of a loop, cross a ford and then a rickety bridge before reaching the steeper parts of the track which rounded the hill to the west. I knew from my Google Earth research not to leave the main track till the very highest point where a rough, boggy ATV track led off towards the summit. This went part of the way but there were a few wet, long,grass sections and some hags to negotiate but nothing too much to bother about, even with my painful knee. The views by this point were excellent but I could not pause long at the top because even here the midges were fierce in the still heat.

I had hoped to have a walk up Cnoc Beithe and Craig Kipmaclyne on the way back down but by the time I was half way down I knew that wasn't possible. I was having to endure terrible knee pains and I wanted to make it back to the car and still able to drive home so I had to make do with taking photographs and promising myself to return to have a walk on these hills sometime in the future.

Despite my problems and my limited day, I still had a great time on a hill that I don't think many people would pay much attention to.