Decided against travelling too far from home given the glorious weather so instead stayed local heading over to Cat Law (which I have done before) and Corwharn (which I haven't!). There was already a car parked at the gateway to Ballintore Castle and another car on a grassy bit nearby but no problems getting my car parked on the opposite side of the gateway. A good morning to the man who lives in the house opposite and off we set heading up the road a bit and to the gate, where I had a bit of a problem because I couldn't get the gate open! Not sure if it was just me though, but it was easy enough to climb over and the dogs could just slip underneath. 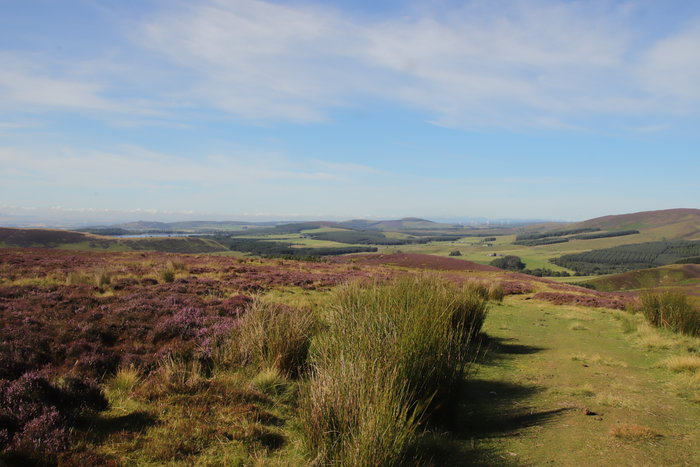 The grassy track led across the field to a clearer track at the gate and out onto the open moorland where there were sheep grazing, views opening up behind us and across to the hills of Glenshee and beyond with Schiehallion prominant. Ahead was Cat Law which was soon reached. 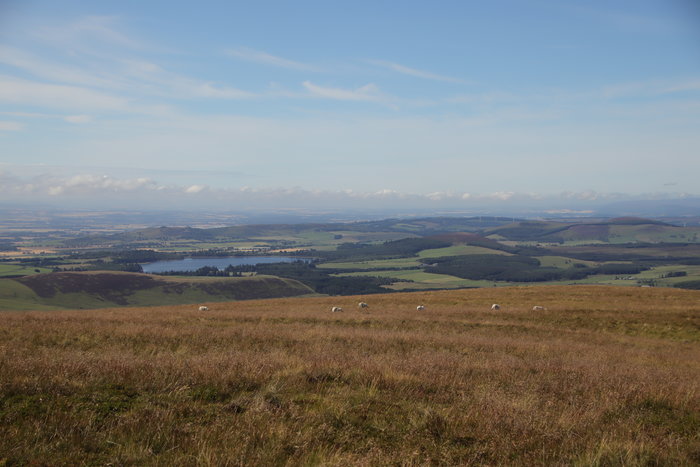 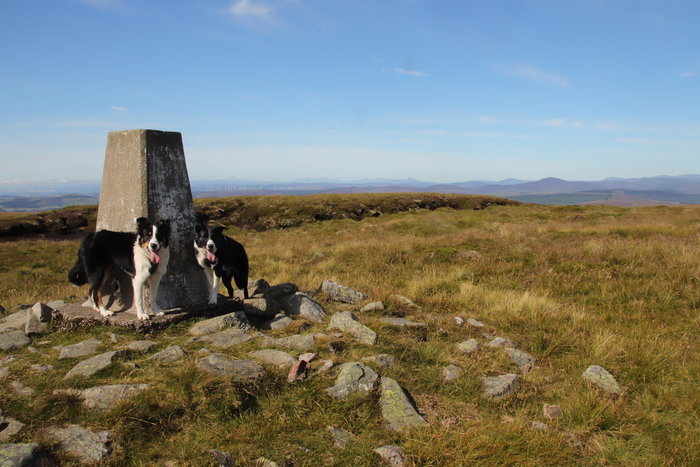 Just along the fence is the gate to go through and it is downhill along grass tracks to head towards the next target, three deer appearing and quickly taking flight. 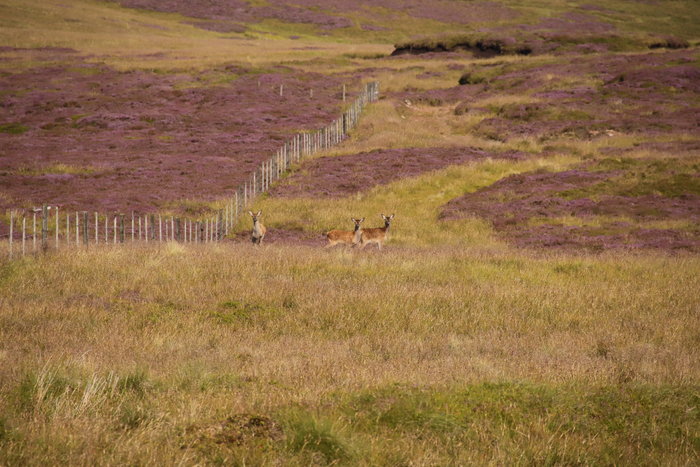 The grassy path leads down to a crossroads where a clear track was reached, we took the track almost straight across heading towards Corwharn, following it round until reaching a path that led off into the heather. It was clear to start with but this only lasted for the first few metres as it became more indistrinct as it headed across ground that was still boggy despite the hot dry weather. Not so much fun for me, but the dogs had a great time! 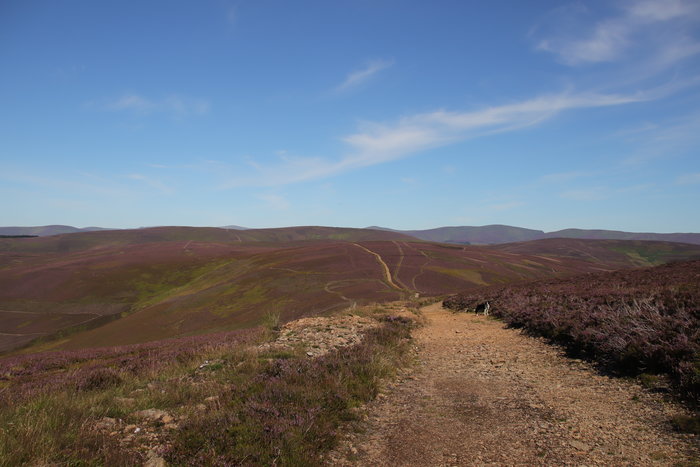 Very clear track to start with 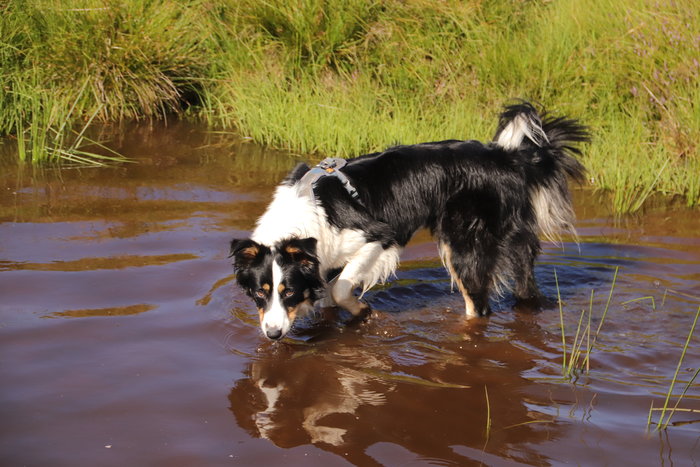 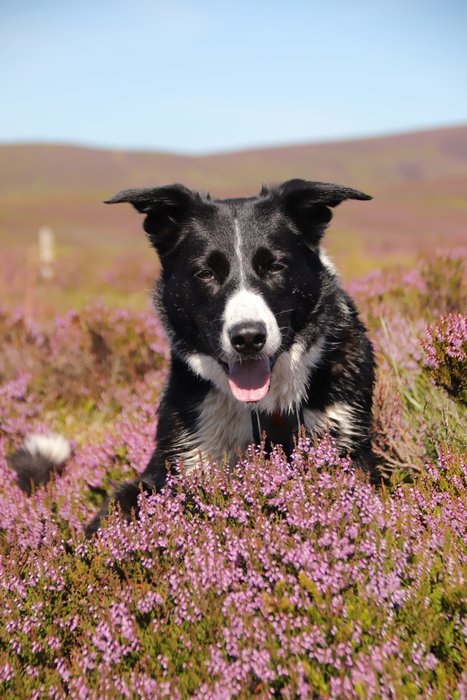 Posing in the heather 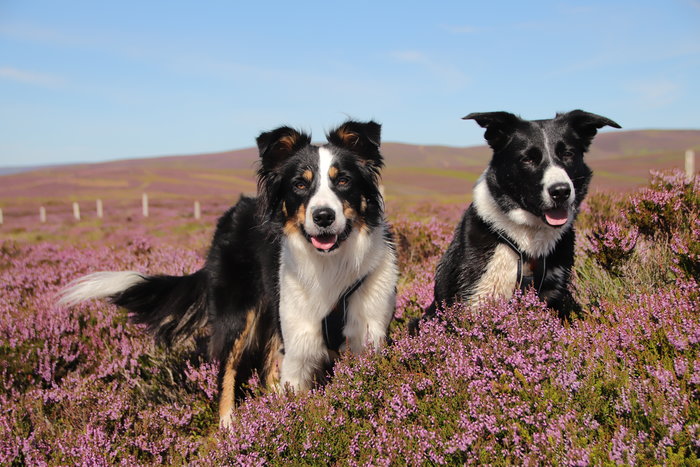 Over the hill we could see the track up to Corwharn, but we had to get all the way down to it first before we could start heading back up again but the path, if we were actually on a path I'm not too sure, did become drier on the descent and we reached the signpost, heading left briefly before turning onto the track we had seen on the descent. Moss entertaining herself investigating the many grouse butts on the way up. 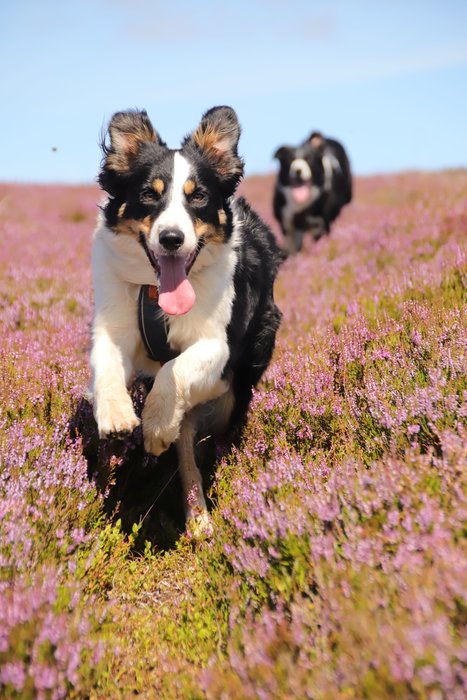 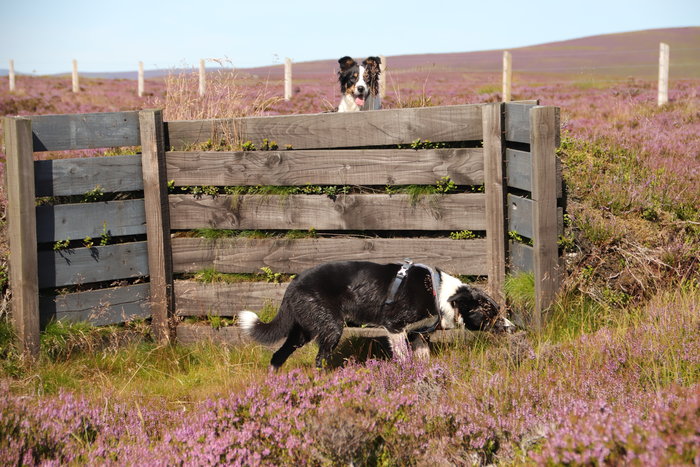 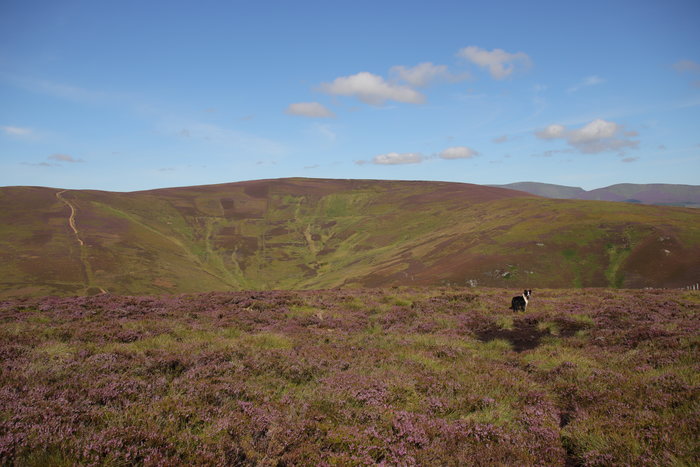 Heading down to head back up the track clearly visible on the left, via some boggy ground. 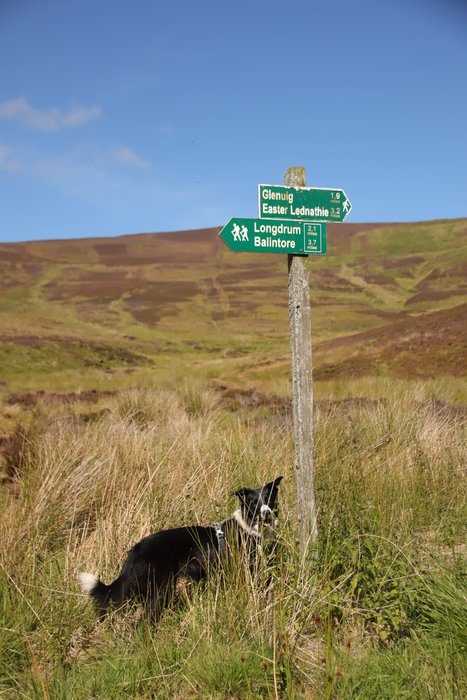 Reached the main track at last!

Reaching the shoulder, we headed towards the cairn that was clear to see for some distance away on another narrow path, crossing the fence to reach the cairn which had views down into Glen Prosen. 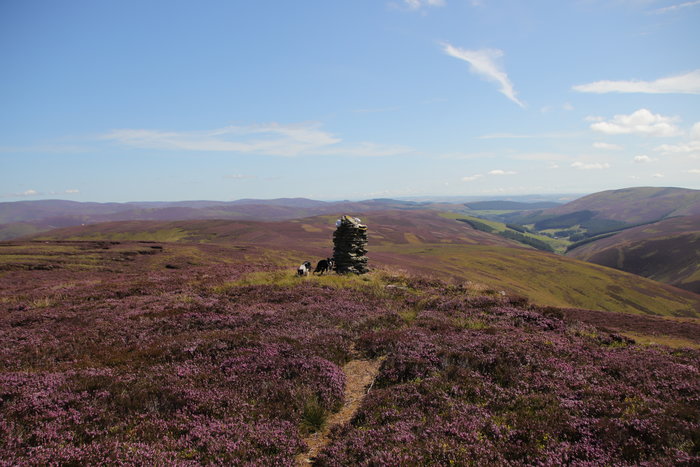 Crossing back over the fence we followed the path back down remaining on the broad ridge where the path we came up joined it the path grassy and not particularly distinct but it soon became a much clearer track as it headed down into the glen. 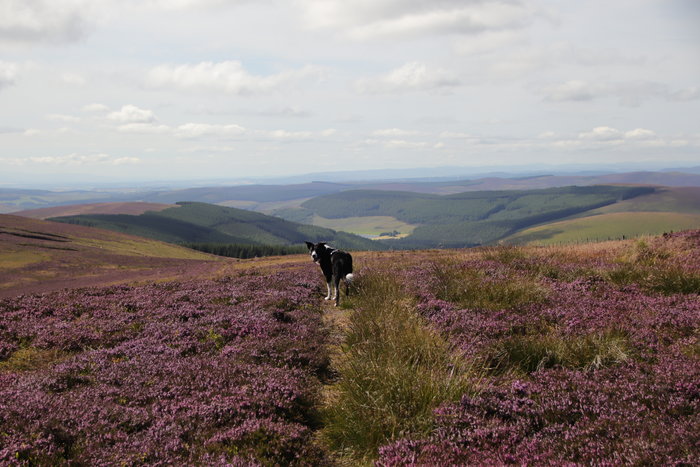 Reaching the main track, I spotted the horses in the field and at a gateway stopped to say hello, the big Clydesdale(?) coming over to say hello shortly followed by two of his smaller companions, the little cob very keen on cuddles and scratches and I was more than happy to oblige getting a myself horsey fix! A bonus on any walk! 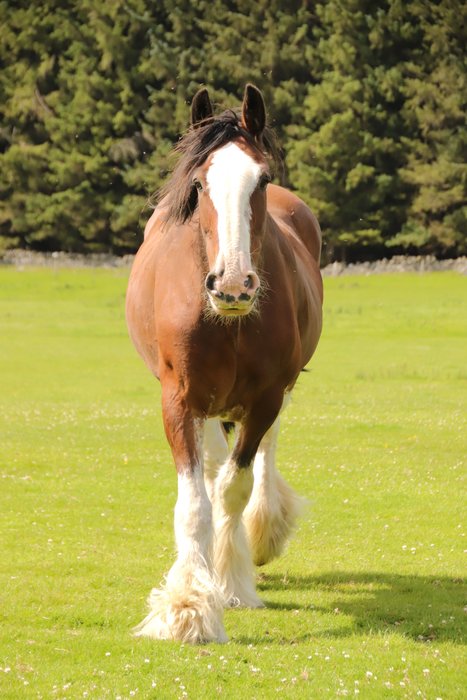 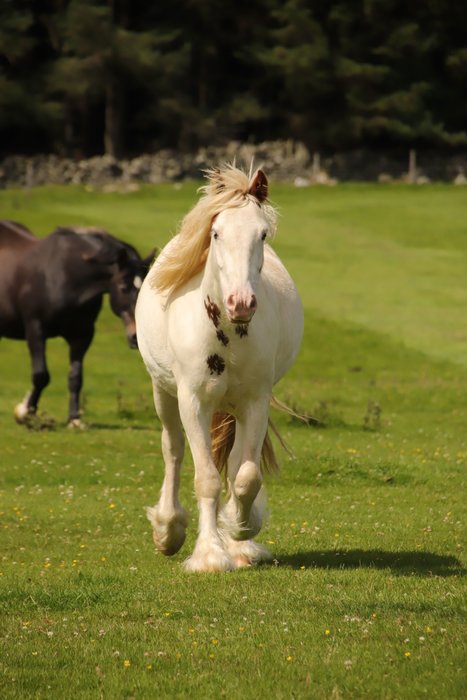 This one loved a cuddle! 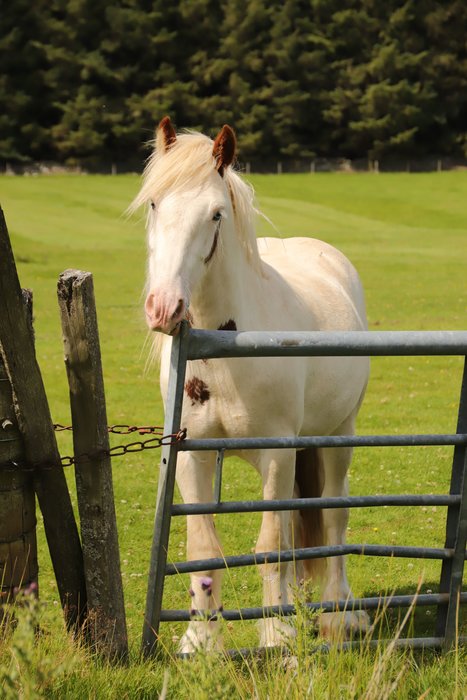 Eventually I had to say goodbye to my new friends and continued along the track to a road, following it through the glen to reach the road at Ballintore and heading along to car with a good view of Ballintore Castle from the road. 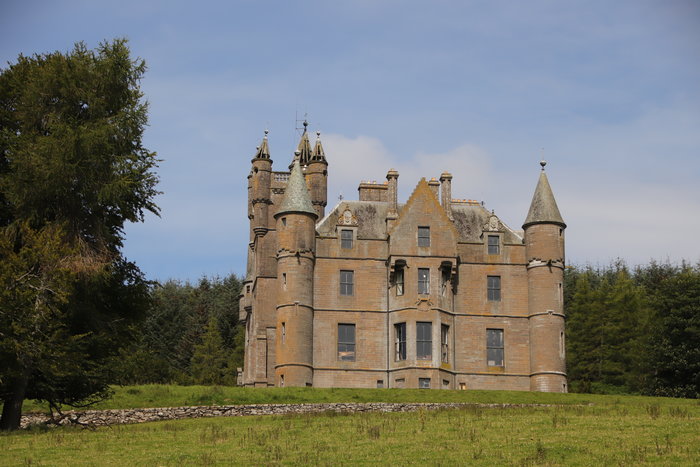