It has become an annual family tradition to walk a Cuillin in the summer where myself and siblings visit our mum on Skye. The previous year, the weather had been against us as we had set out to walk this Munro and being confronted with what can only be described as a 'washout', had opted for a lowland walk to Camasunary Bothy.

It was with some determination therefore that this year we (my brother, brother in law and I) headed toward the start point at Torrin. We arrived to a blissfully clear day, with the ominous form of the mountain towering above us.

After applying considerable quantities of Smidge, we set off, a big pack of jelly babies in tow. It must be said that the route begun with an excellent path constructed by the John Muir trust, hats off to everyone involved. We stopped several times, in complete awe of the landscape we were entering.

The path soon petered out onto a steep incline, where evidence of walkers before us was visible through a faintly worn out scree path. It had been very helpful reading a previous post in which it is stated NOT to proceed beyond the 'large boulder' and instead head up right beforehand.

The going become a little more tricky after encountering a chute of loose shingle, it should be said that if you bear to the right of the chute, this provides easier going. From here the path was clear to see, and we were filled by how deceptively far we still had to go.

We meandered up a stony path towards the summit, the views absolutely breathtaking. We finally reached a rocky slope where a path was difficult to see. A vague route was visible and following this it led to a large (and high) boulder sloping outwards at an awkward angle. The path was beyond this, and despite many efforts, the rocks surrounding this had been worn too smooth to climb up. Concerned that we may be thwarted a lone hillwalker suddenly emerged 50yards below us. He pointed helpfully at the gap where he had emerged and we carefully made our way down.

A stony but distinct path was tucked around the corner of what we had assumed was an exposed and dangerous ridge. Following this up we were finally on the home straight to the summit and we were not disappointed.

We had timed it to perfection. The clouds cleared, the sun broke and we were engulfed in the amazing scenery and landscape of the Cuillin. After lockdown, this was the perfect remedy. The whole black Cuillin ridge opened up before us, and as we snacked on mums homemade, and renowned brownies we immersed ourselves in the clean air. The surrounding peaks became easier to identify using the PeakFinder App, a new discovery of the holiday and highly recommended.

After a good 45mins at the top we took one last view and headed down. The cloud started to close in a we rejoined the John Muir path and after soaking tired feet in a pool of fresh mountain water headed back to the car park.

This was an amazing walk, a simple route with a few mild scrambles and incredible rewards at the top! 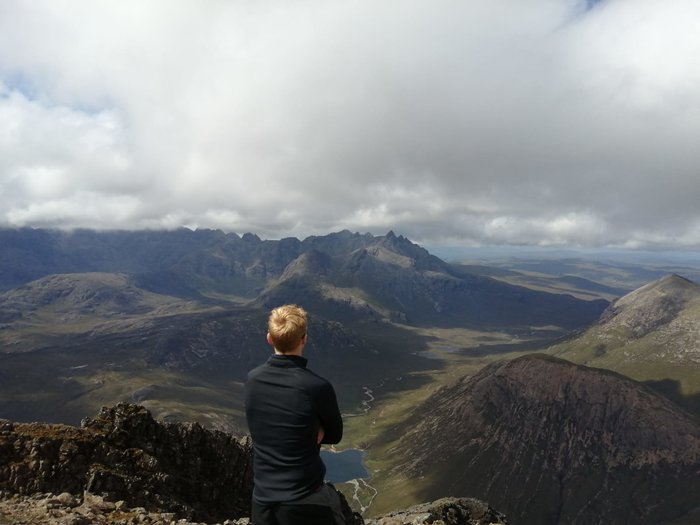 Unable to take eyes off the ever changing landscape