Winter, my sciatica, coronavirus lockdown, the three main reasons why me and grandson Matthew had not been out for a hillwalk since a Hogmanay jaunt in the Pentlands. But an easing of my sciatica coincided with an easing of lockdown restrictions and suddenly getting out on the hills was possible again.
Matthew had been on 32 Munros since doing Ben More and Stob Binnein last September and we had hoped that that this year we could get that up to 50, but, for the reasons mentioned above, a more realistic target of 40 before returning to school was set. Even this wouldn't be straightforward, as for family reasons, we cannot go walking if and when we want.
However, after a few warm-up hills ending with the Corbett Ben Donich, the Glas Maol 4 on the 24th July, Sgairneach Mhor and Beinn Udlamain at Drumochter on the 3rd August, we just needed 2 to achieve our goal.
Despite our limited opportunities, I had avoided organising anything on a weekend because everywhere just seemed so crowded on Saturdays and Sundays at the moment. But Sat 8th was our last chance so we searched for something that perhaps would be less popular, and settled on Tom Buidhe and Tolmount from Glen Doll. Matthew really wanted to walk on Jock's Road and see Davy's bourach. Although we thought this route would be quiet, I knew the car park was also the common start point for Mayar and Dreish which would be busy, so we hoped to be in the car park for 8am at the latest. But like many plans this didn't quite work out, but we arrived after a 2hr journey at a rapidly filling car park at 8.30am and managed to park OK. Not sure if this would have been the case 30mins later. There were also loads of cars in a nearby grassy area. Bonus was the parking charge was suspended. At the split off onto Jock's Road.

Setting off on the path towards Corrie Fee, Jock's Road branches off after 10/15 mins where we headed through Glendoll Forest to emerge into the beautiful Glen Doll. Heading off through Glendoll Forest. 
The path clings to the northern side of the glen with White Water flowing in the glen floor. Not too sure. Matthew took the pic. Could be Craig Maud? Matthew heading up the glen. Looking back to Glendoll Forest. Eventually the much anticipated Davy's Bourach was reached. Beside the Bourach there was a path leading up to a small cairn which was a great viewpoint to look back down the glen. Me and Matthew and Glen Doll.

Nearby, there was also a small plaque dedicated to five walkers who perished near and around this spot on New Year's Day 1959, but we didn't spot this till our return on the descent.
Shortly after the Bourach we decided go leave Jock's Road, cross White Water and strike up the steep side of the hill which I believe is called Meikle Kilrannoch, which would give us a more gently rising wide ridge walk to the summit of Tom Buidhe,
There was a lot of boggy ground and peat hags to be negotiated on the higher ground of this walk, but to be honest none of it was quite as bad as I thought it would be.
The summit of Tom Buidhe was eventually gained, and let's be honest it's not one of Scotland finest, standing as it does on wide open ground. Matthew summit of Tom Buidhe no.39. A few people were on the summit having arrived from all directions. But, I think there were perhaps only 4 groups who we saw all day that had did these hills from Glen Doll.
A short break here and we headed off for Tolmount which is only 30/40 mins away. Matthew was anxious to get on and get to his 40th Munro Tolmount is the better summit and does have good views and our longest break was taken here. 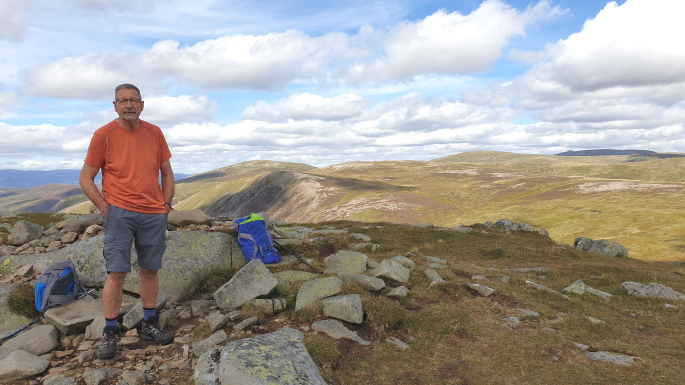 Me, summit of Tolmount. Other walkers take in the view from Tolmount.

Matthew was delighted he would return to school having achieved his goal. He whipped out and donned an old white t-shirt he had used felt tipped pens to sketch on the day before Summit of Tolmount and No.40 for Matthew (1) 
Any extra hills we manage to do during the rest of the year will be a bonus as obviously there will be less days available that suit both him and me.
We left Tolmount summit and headed roughly north east till we intercepted Jock's Road once more and began the trek past Crow Craigies. Taking a break on the descent.


Back near Davy's Bourach we spotted the memorial plaque for the first time. Noticed the memorial plaque on the way back.

We continued down into into Glen Doll, though the forest and back to the car park. Another view of Glen Doll (and why not?). Heading back to the Ranger Station. Back in Glendoll Forest.

Mission accomplished.
What did I think of our walk? Well all though neither of the two summits are particularly spectacular, the walk to and from the high ground was really enjoyable and made the walk worthwhile. In retrospect I would do the looped part of the walk anti-clockwise, i.e. Tolmount first, but it's 50/50.
The problem I now have, is that I am available to pick up and enjoy the odd walk during the week, but I know Matthew will be annoyed to miss them (plus falling further behind me in his Munro count if I go for one or two Munros) and also that will make it even harder to do further walks with him that are new to both of us. There is also the fact that my dear wife has never been super keen about her old man wandering about the hills on his own, more so since my latest bout with sciatica (much, much improved, but still on meds and with some numbness in my right leg below the knee. Awaiting MRI scan result). But in general walking is good for me, sitting down, not so much, so after writing this it will be back to my map to hopefully plan my next outing.

Congrats on the 40th Munro Matthew

They've been doing some improvement to Davy's Bourach since I was last there!