g51.gpx Open full screen  NB: Walkhighlands is not responsible for the accuracy of gpx files in users posts
After our half day yesterday I'd thought that Mark would want a rest day, after all, it's 2 years since he'd been on the hill and much more than that since he'd done winter walking. Yesterday was an effort for him and a great achievement given indoor climbing has been his only recent training. But we'd looked at possible routes for today and he decided to go for it again, that's the lure of a great day out in the Scottish hills (and a new pair of Mantas)!

I planned another visit to the South Kintail ridge and a circuit route that wasn't too great a distance. The 2 Munros at the eastern end of the ridge looked to be just the job with a long gentle walk-in along the road over the pass to get the muscles warmed up, and maybe to use the stalkers path beyond the bealach to ease the way onto the ridge. The weather was also forecast to deteriorate in the afternoon so best not to be going too far today.

We parked at the Cluanie and set off at around 10. It was overcast (a huge change from yesterday) with a thin cold breeze as we set off along the road. Just over the bridge there was a sign announcing 'deer cull in progress' so we didn't expect to see any. But a little further on we looked to the right and, on the grassy plain between mountain and river there were about 20 in the distance. Hmm not too clever this lot. We carried on, ascending gradually, making way for an lorry that was going to the lodge and tempted to thumb a lift! We passed the stalkers path coming down from the right, marked by a small pile of stones - this was to be our descent route. We passed above the lodge and around a gate with another deer cull sign, on the skyline to our right there were quite a number of deer. Definitely stupid in direct line of sight from the lodge. As we rounded the bend to the right there were more deer on the road.

So with the cull taking place from the lodge (we heard shooting later) I suppose it would have been possible to sit in a comfortable chair by an open window (dressed in tweeds), mug of tea/dram to hand, rifle on a stand ready to shoot the deer that were nicely showing themselves on the skyline. No effort required.

As usual, as height was gained the views improved as we continued at a gentle pace. We reached a bridge where the road turned left and decided to take the route straight up from here instead of the longer walk to the stalkers's path that was still about 2km further on. There is a stile over the deer fence that lures you into the wilds and a boggy path of sorts. This soon disappeared under the sugary snow and it became tough walking in the snow pockets and heather, a bit of a slog began. Should we have continued to the stalkers's path? Further up there's a way across the fence again although this consists of just a few wobbly lengths of wood nailed onto the fence post, it won't last long. Some walker will pull on it to climb up and end on their arse in the mud. The path was soon lost so we just ploughed on through the wilderness. The view down Glen Shiel was grand, but stark, and bit by bit we saw that the sky was darkening. At last we'd gained some decent height and were starting to get out of the heather region, ahead we could see the start of rocky terrain that looked more inspiring. We continued across a flat area to the start of another slope, covered with some proper-looking snow at last. It was fairly firm and perfect for climbing - staying with the boots and poles, crampons not needed yet. At the top of this section the ground was level and boulder covered. We stopped to take in the scene again, the mountains sharply etched against the grey sky. I could see my whole route to Ciste Dubh, done earlier in the week. We could also see the ridge we'd need to take to get to the summit of Craig a Mhaim. From this distance it looked simple, getting closer we realised we'd underestimated the scale. It was bigger than we'd thought and there was a steep section to get onto it, and steep again at the top. We got the crampons on and ice axe out and chose a snowy line up through the rocks. There was an opportunity for some front-pointing practice. The ridge wasn't difficult and was very enjoyable, giving a mix of terrain with a final rocky section at the top. At last we were above the height of the corniced ridge that leads west the the next Munro. From here it was just a short distance to the cairn and we were now into the cloud that had slowly been descending. It got windier and this was now proper Scottish winter conditions, no nice sun and blue sky! We could still see the way ahead, with snow cover on the north side of the ridge but little remaining to the south. 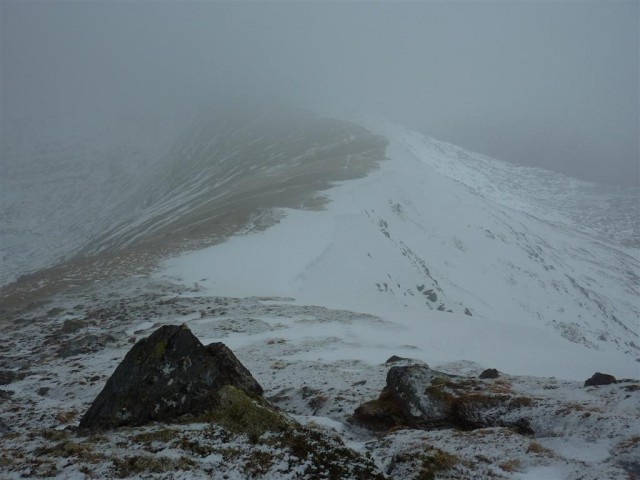 We kept to the edge of the snow, taking care realising that the cornice was large and the edge not clear. There were many fractures, well back from the edge, and the cornice had partially collapsed in places. Constantly stopping to look at the cornices gave some interest to an otherwise uneventful walk and we stayed near the ridge edge all the way along instead of using the path where it was visible. The cloud lowered some more and the visibilty reduced. I'd read in the WH route description that there was a narrow section hereabouts, but couldn't recall if it was before or after the next Munro. I got my answer quite suddenly as it appeared out of the clag! Now, on the walk so far, Mark has been battling on in the face of being ,how shall we put it, a bit out of condition. Dead man walking was how he described it a number of times! I'd been admiring his staying power for the past 2 days. He took a look at what was to come and said 'I'm not going over that, let's go back the way we've come'. Hmm I think not! A minute to review the terrain more closely and the challenge was taken up. We went ahead, taking our time and making sure each move was secure. I kept us to just below the ridge top, using the deep snow on the edge for ice axe placement. It was great, just great! For Mark it was different as we'll see later. The brilliant thing about the clag is that each section appears out of the mist and you don't know in advance what's coming up. So there's a little rocky bump. A place where you edge around a small boulder, holding onto it whilst you make use of the small rock ledge below it for your feet, a super view straight down a gully to the corrie. It started to snow and the wind increased. It took concentration and solving many small problems, absolutely absorbing. Mark admitted that he was on the verge of not enjoying himself any more, tiredness starting to override the pleasure. But his mountain experience and drive prevailed and we knew there wasn't much further to go here, we slowed some more. At little further on we could see the path a little lower down on the left, bypassing the rocky edge. 'Shall we go on the path' Mark said. Nah! We stayed to the rocks for the final push to the top, no complaints from Mark! It was a wonderful part of the mountain, Mark looked pleased (I think!) as I took his photo at the end of the narrow section. The snow was falling more thickly now, time to get down. The summit cairn was just a short way on, from there the compass was checked for the descent down the north ridge. On the top section of this the stones were covered in ice but the angle wasn't too steep, descent was fairly fast. There are crags after about 0.5 km but, on the left, there's a steep ramp down to easier ground. The ramp consists of loose stones so great care was taken. From about halfway down we used snow runnels where possible. Crampons off now for the heather and soft snow-bashing. The wind was still strong here and the the snow increased again, being driven horizontally. It was more dramatic stuff but was beginning to coat us now as it drove in from the right flank. Then, in the desolation, we could see the small lochan (part of which had frozen since we'd seen it on the way up), but best of all, there was journey's end - we could just see the Cluanie Inn through the murk. There was a bright light to guide home the mountain travellers. Past the lochan, over a couple of streams next to what, in summer, would be a great wee waterfall, and with our ascent ridge behind. It gave a good last view of our doings before we started down the stalker's path to the road. We debooted then retired to the Inn. When we arrived there was no-one else there. The hardest part of the day turned out to be trying to get the barman to understand which malt I wanted with my haggis. Fortunately they're arranged alphabetically so 'left a bit', 'down', 'no, down', 'yes, yes, that's the one' finally did the trick. Mark was panting since his pint had been poured but not given to him then the barman disappeared for 5 minutes. 'Too much froth' was the reason given. The meal was great though.

What a brilliant day, again! And what a 2nd day for Mark who's been running on adrenaline!

Great report and some fantastic photies, love the 'front pointing' shot - hats of to your mate Mark for sticking with you and taking the tough route even when he was a spent force