Half a ring of burning hot metal

Half a ring of burning hot metal

Munros included on this walk: An Gearanach, Stob Coire a' Chàirn


Having set off from Glasgow at 7am we arrived at a sun baked Nevis Gorge Car park at 10am. The midges decided to eat us for breakfast. Midges were going to be an issue all day as there was hardly a breath of wind. The lack of wind contributed to the oppressive heat and with no shade the sun was brutal.

The Falls of Steall were spectacular. 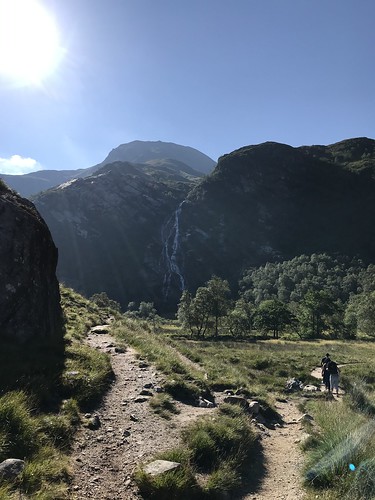 We decided to cross the wire bridge rather than search for somewhere to ford. 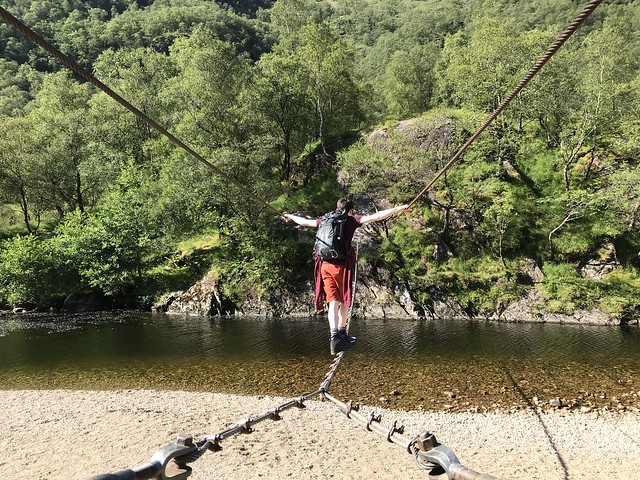 The WH description is not kidding when it says that the section after you have passed the hut to the start of the actual climb is boggy. I stepped out onto what I thought was firm ground and the next thing I knew I was nearly waist deep in bog! 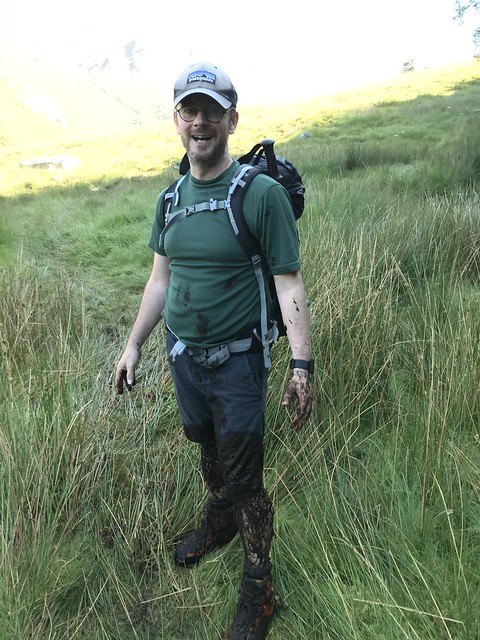 When we crossed the bottom of the falls I tried to wash some of the muck off. I got the worst of it off but it also meant that water trickled down inside my boot

The zig-zagging of the path takes the worst out of the gradient. However, with next to no breeze and no shade the heat was intense, and we were going through our water at a concerning rate. After a couple of hours walking we arrived at the summit of An Gearanach. 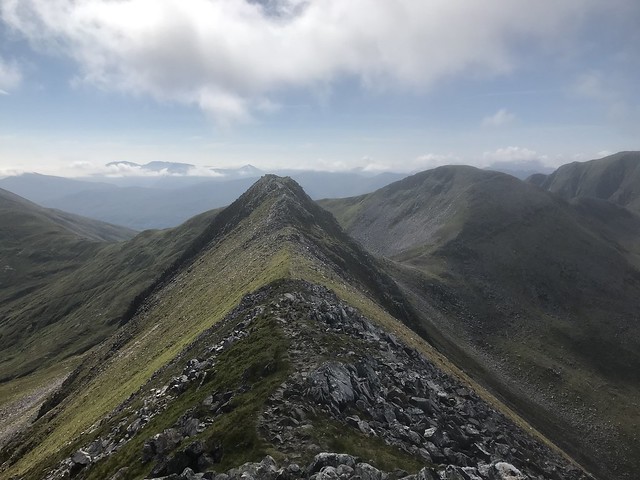 (looking ahead from An Gearanach )

I had to misread the map in my prep with regards to the decent from An Garbhannach to Stob Coire A' Chairn.
We pressed on enjoying the mix of easy scrambling and walking. 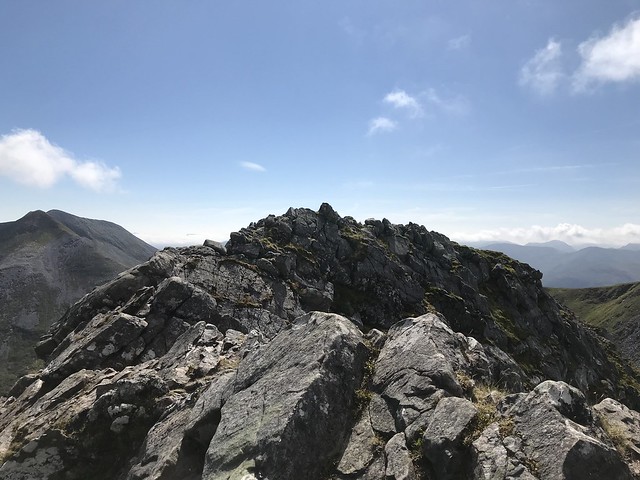 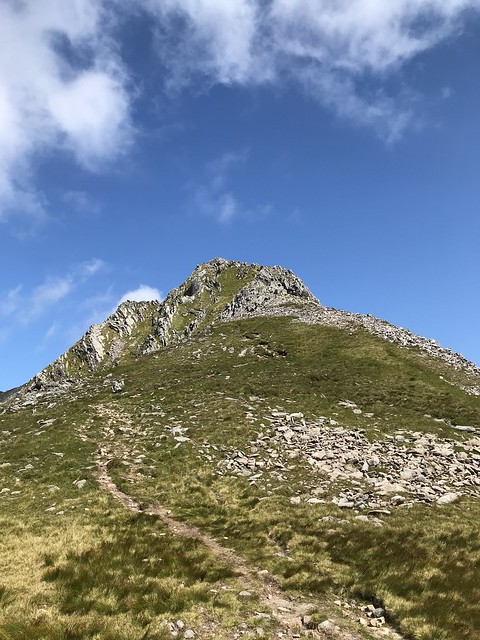 When we reached the summit of Am Bodach there were a few others taking a break for lunch, a group of three walkers who had been 5 mins or so ahead us and a number of others who we'd not spotted on the hill yet. 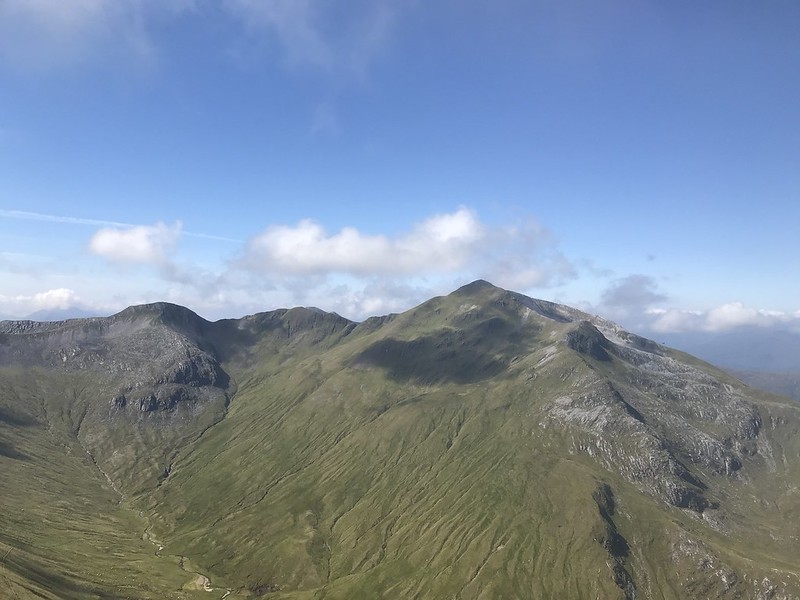 Looking across to Sgurr A' Mhaim and ahead to Am Bodach we could clearly see the decent and accent which lay ahead.
Bob and I had a chat about how we were feeling and the amount of fluids we had left and if we should press on or call it a day. Applying the old adage that the hills will be here another day we decided to head back to the car. We dropped down to the bealach between An Garbhannach to Stob Coire A' Chairn and dropped into the corie where the OS map shows a stalkers path which skirts round the tops and joins the main path at the top of the zig-zaggs.

This path as quite well defined to begin with, but became increasingly hard to find. At one point we spotted a few groups of red deer on the corrie floor. I counted about 50. 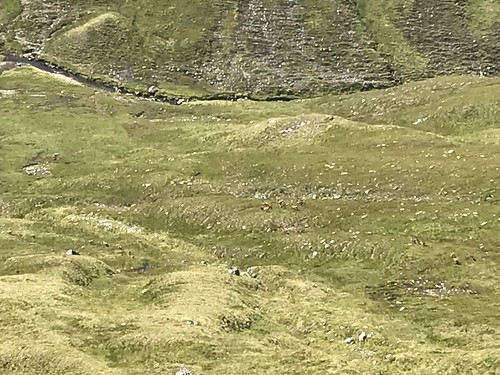 If you look hard you can spot some of the deer!

We eventually found the main path and dropped back down to Steall Meadows. Rather than cross the bog to get back to the wire bridge we had spotted from a bit higher up that there was a section of the river which was easily fordable.

The tack from the falls back to the car park was busy with tourists and also seems to be twice the length it was on our walk in. 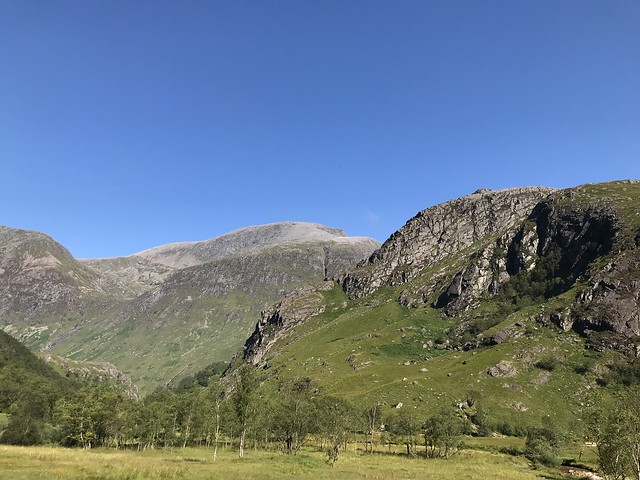 "The Ben" looking splendid from the meadows.

When we got back to the car at 4pm and I got my boots off then I could clearly see what I'd some discomfort in my right foot. 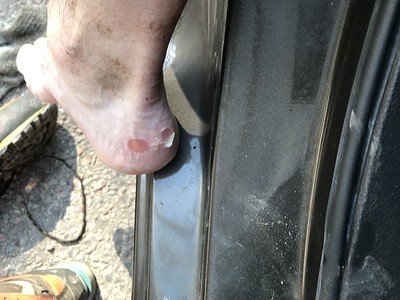 A combination of sweat from the heat and water which had got in my boots when I tried to clean my legs meant that my feet looked like prunes. I'd taken my boot off on the summit of Stob Coire A' Chairn to get some of the peat out and think that when I put my book back on I did not secure my heel when I laced up.

The journey home was a nightmare - there was a bad car crash near Bridge of Orchy - people were saying the road would be closed for a minimum of 3 hours. So we headed back to Ballachulish and down the coast road to Connel where we picked up the road home to Glasgow. Thoughts are with those involved in the crash - the long detour was an inconvenience, which in the grand scheme of things is nothing compared to being involved in a serious car crash.