After thoroughly enjoying the Mullardoch round in Early July, I set about planning some more long days out, both to make the most of the daylight hours and to rattle through some Munros, to try and make up for the time lost in lockdown. I was looking for routes at about the 30 mile mark that get me to the remote mountains that would typically involve a wild camp or biking in and preferably in areas I was yet to visit. Flicking through my Munro book, I saw that the Beinn a Chlachair and Geal-Charn groups could be easily (from a navigation/technical point of view) linked together to make one grand day out and ticked all my boxes.

After a short drive from my overnight stay near Loch Lochy, I parked up in the Layby off the A86. It didn’t bode well that the first person I saw was wearing a midge net. Sure enough, as soon as I got out of the van I was swarmed, so there was no faffing, I just grabbed my kit and at 08:00 set off jogging along the estate road to Lochan na h-Earba. 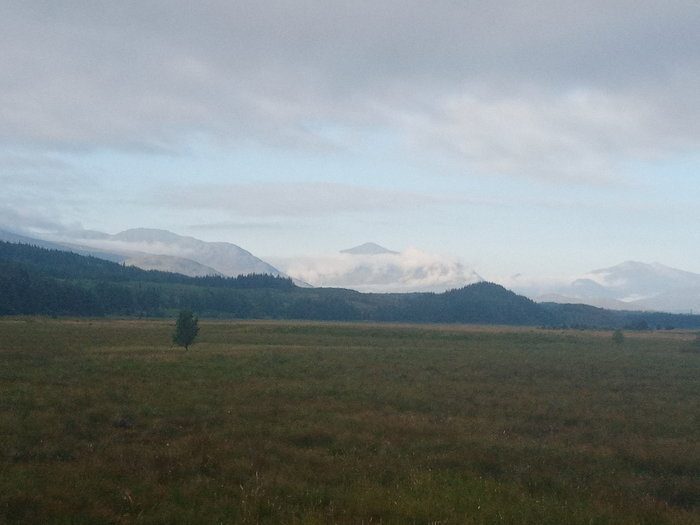 Looking west I could see the Grey Corries and surrounding mountains basking in the morning sunlight, meanwhile looking ahead I could see Beinn a’ Chlachair shrouded in cloud. “ have I picked the wrong mountains?” I asked myself. After passing the sandy beach at the head of Lochan na h-Earba, I followed the stalkers path up the Allt Ciore Pitridh, on the look-out for a path heading off south on the direct rout up Beinn a’ Chlachair. It shortly became evident that the was not going to be a path, so I struck off across the heather and bog and into the clouds.

As I reached 900m the sky above started to look bluer and the mist started to thin. I knew what this meant! I sped upwards and then…. BAM! I was above the clouds 😊 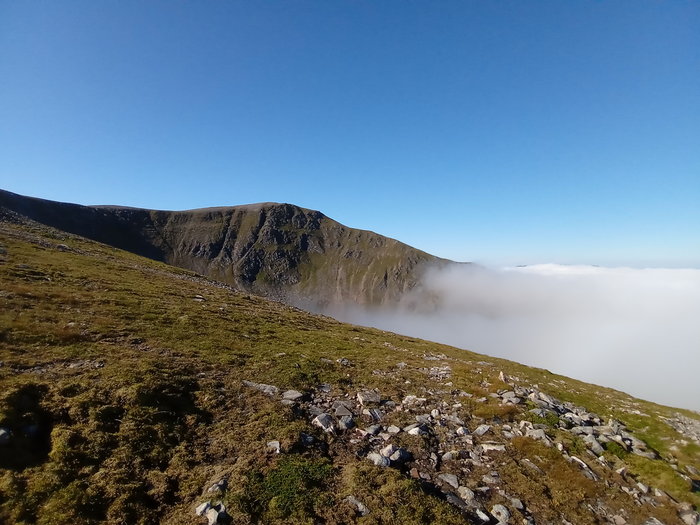 I reached the summit of Beinn a’ Chlachair and sat on the summit cairn gazing at the amazing sight of the surrounding mountains peeking through the clouds like a series of small islands in the sky. After pausing for far too long, considering I had another 6 Munros to climb, I ran off in the direction of Creag Pitridh. Running high in the mountains with the clouds below you is hard to beat.

The climb up to the summit was nice and easy in comparison to the hard work at the start of the day. Upon reaching the top I saw two chaps sat at the summit fighting off the midges, so I just said a quick hello touched the cairn and cleared off. With only a 100m drop between it and Geal Charn it doesn’t feel like its own mountain. Can’t fault the views from its summit though!

Geal Charn was a little harder to get up as the heat of the day was building and the climb was in the shelter of the breeze. Once there, I had an excellent view of the 4 Munros to come, and as the sun had burned away the cloud, I could see just how far I had to drop and reclimb to get to them. After a pathless heathery descent to the shores of Loch a’ Bhealaich Leamhain, I was relieved to find a good stream to top up my water and a reasonable, albeit boggy, path to follow down to the Allt Cam, which was thankfully easy to cross hopping from boulder to boulder.

Next up was the toughest part of the day, the 550m climb up Carn Dearg. Heather bashing in the heat of the day is hard enough but I was also sheltered from what little wind there was that day, so I was sweltering and swarmed by midges. This was also where I got my first introduction to the delightful Deer Ked. Not my favourite part of the day, but I just used it as motivation to get to the top as quick as I could, head down and stoically marching upwards.

Reaching the ridge, I was more than rewarded for my efforts by the scenery around me. Ben Alder to my left, my 3 morning Munros to my right, and ahead of me the mass of Geal-Charn. What’s more, a nice steady breeze cutting across the ridge. I was surprised to see so many people on the summit of Carn Dearg. I’d seen 3 people all morning on hills that are easily accessible from the road, but here there at least 15 folk taking in the views from what I had down as one of the more remote mountains. Geal Charn looked a long way away but the ridge was nice and runnable, grassy to start with, but narrowing as the steep pull up to the plateau begins. I diverted from the path to fill up my bottles from the small stream that drains the plateau and headed directly, if wearily from there to the summit and my high point for the day.

I was lifted by the fact that I was 5 Munros down and with only two to go there was beginning to be occasional cloud cover to give be brief respite from the heat. The next 2 Munros of Aonach Beag and Beinn Eibhinn also looked pretty near and without any worryingly big drops in the ridges between them. 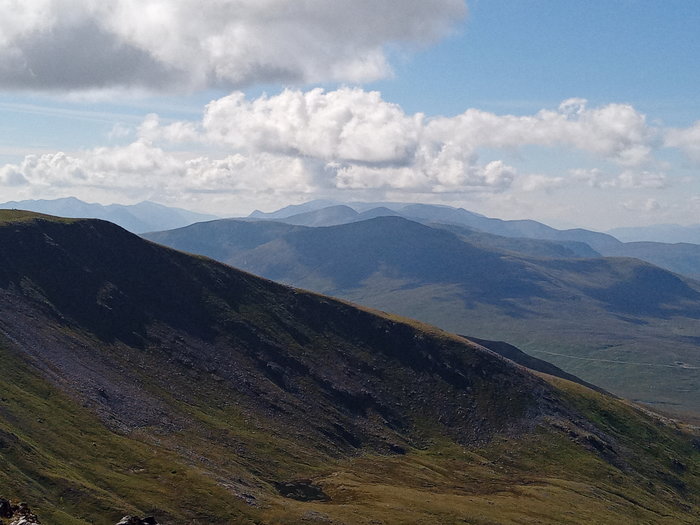 There were quite a few groups on these hills, every one of them complaining about how bad the midges were on their windless wild camp the night before! My legs were beginning to feel tired from the mileage I’d covered to get here but at least I didn’t have to contend with that! Aonach Beag and Beinn Eibhinn passed by fairly easily, the descent down to the north however was another matter. More pathless heathery ground was not so welcome with 20 miles in my legs, but it had to be done, and after what felt like a few years in purgatory, I reached the well-made path which appeared out of the bog 1.5 miles south of Lubvan. Now it was just an intermittent jog/amble along the estate tracks 5 miles back to the road, while watching the mountains across Glen Spean glow in the early evening light. I got back to my van at 7pm, 7 Munros, 27 miles and over 7000 feet of ascent behind me and one of the most memorable mountain days I can recall.

Re: 7 Munros South of Loch Laggan

Users browsing this forum: No registered users and 130 guests