Ben Oss and Bienn Dubhchraig were my chioce for Saturday, taking advantage of a slight lull
in the recent wet weather. The forecast was also looking good for some clear weather on
the summits by midday.
I was also hopeful of some great views and photos of Ben Lui from the summit of Ben Oss.

Parked in the usual car park just off the A82 at Dalrigh.

There were a few other cars there with walkers at various stages of preparation,
all exchanging the usual courteous "good mornings" etc. - nice bunch us hill-walkers

One young lad set off first and that was the last I saw of him all day. A lovely sight and very enjoyable start to the walk with the Scots Pines in the low lying mist. 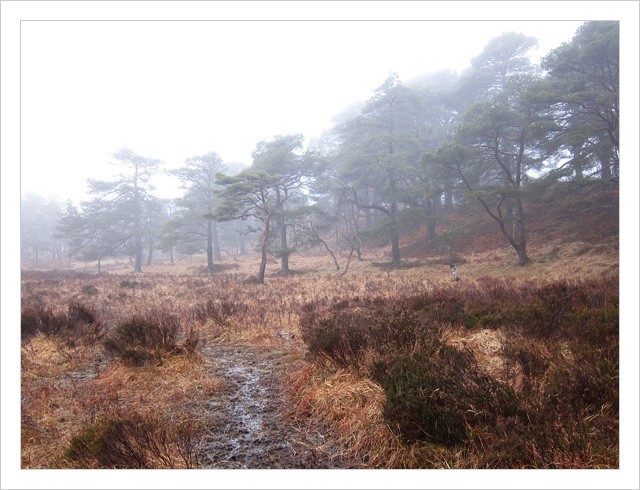 Stopping regularly for photos I eventually noticed two of the guys from the car park,
Jim & Ross, who were catching up just as we cleared the forest.
We had a brief chat then took slightly different routes to the foot of Bienn Dubhchraig.
We met again and from there we headed up together and although not too difficult
it certainly wasn't easy going as any path was completely obscured by snow.

A quick look behind at where we'd come from! Eventually we hit the summit and after taking in some fluids etc. a quick photo! We were just preparing to head off for Ben Oss when Derek & Ann appeared from the mist below.

After a quick chat we decided to proceed as a team now and as the only lone walker
I was quite glad of the company as visibility was now very low, approaching white-out
for a large proportion of the walk.
One brief moment of clear skies was all we were gifted on the ascent of Ben Oss.

I was feeling unusually fatigued as we headed up and had no choice but to stop
probably less than 100 metres from the summit as I had simply run out of energy.
Normally I wouldn’t have struggled much even in the snow so
I can only put it down to an off day

I encouraged the others to keep going and they kindly waited at the summit
while I hastily consumed some much needed fuel.
Another break for me at the summit and I’ve never enjoyed a cuppa tea so much!

So much for my views across to Ben Lui All refreshed we headed down, enjoying some good banter and staying as a group till the end.

A couple of candid shots as we descended through our pure white environment: Last shots of the day: It was nice to note that we all use and appreciate this site so if you see this report
please add your own thoughts Ann, Derek, Ross & Jim

Goodbyes said, we were all on our way before long with another 2 Munros under our belts.

A great day with great company, thanks everyone!

Another good report....like the white back ground you chose for the photo's....I think it makes the subjects stand out clearer.......I hope that lad never fell off the bridge.

Nice report Davgil, the shots toward the end of the whiteout are really nice. I had a failed attempt at these two last March/April, only the whiteout started much lower down and I turned around before making the 1st ridge. It was good that you all stuck together for a while, gotta love the hillwalking fraternity.

I'm sure that lad was ok, I've no idea where he went but I'm sure he didn't do my route
or I'd have met him at some point.

Things certainly change when the mist is all encompassing.

I'll be honest, if I didn't have my gps I wouldn't have trusted my map reading skills
to navigate confidently in these conditions.
(someone will shout at me for that I'm sure

Looks like you had much the same views and weather stretch and me had yesterday.Still always nice to get out and even better if you can have company on the way,still got these 2 on my to do list,but think I will leave till the snow has gone

Hi David,
I've been watching the site like a hawk since i got home, i was really looking forward to seeing my ugly mug on your report.
It was an excellent days walking taking in the two Munros, but i've got to say i found the going pretty tough due to the wintry conditions. My legs are like lead today. So much for the 60% chance of good views from Munros in this area!
It was good to meet you, Anne and Derek and i'm glad we all stuck together and spurred each other on, especially on the return up Dubhcraig to descend!
Your report and pictures are excellent.
Ross and me were thinking of going out again a week on Saturday (26th) ,wives permitting, so we'll message you to see if you are interested. I think it will be Cruach Ardrain and Beinn Tulaichean.
Good to meet you,
Jim Hood.

There are no difficulties on these two just the snow itself and, I believe, the scenery is stunning

in clear weather so quite a good winter walk I think.

Glad you enjoyed the report, sorry to keep you waiting

Saturday 26th might be a problem for me but I won't know till later that week.
I'll definitely meet with you guys again if we can work something out though.

Great report and some cracking photies, the candid shots in the whiteout really stand out - enjoyed this - thanks

These two are probably my favourite shots of the day thanks to everyone
wearing bright colours!

Looks a good day despite the poor views.

Quite atmospheric shots of the pine woods. 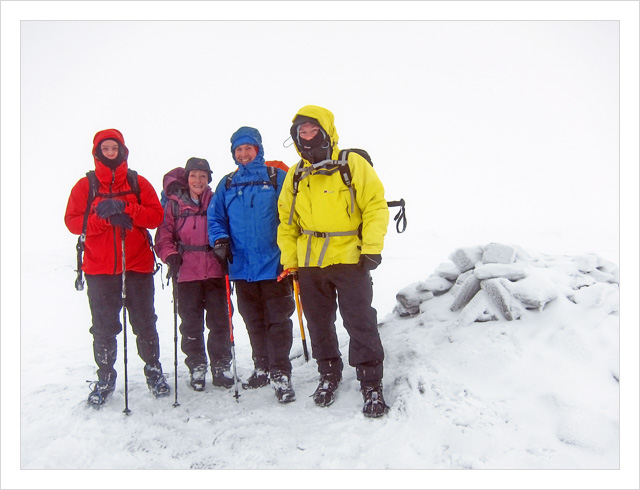 I love the pinewoods at the bottom of these hills in spite of the bogs. Looks like you had a good trip out... glad to hear everyone was a walkhighlands user