The only reason I have made this walk report public is the route, last time I tackled these 2 it was from Glen Feshie as per the WH route.
With George flying off into the sunset, well Italy, Parminder & I had the opportunity to tackle more hills using bikes so after studying what hills Parminder had left I opted for another visit to the Cairngorms. My initial plan was to tackle these 2 from Glen Feshie which is the way I did them first time around. After a bit of research these 2 hills looked like an easier day utilising our bikes and starting from Linn of Dee.
Parminder was happy to drive to Linn of Dee for the second weekend on the trot. I had plotted out a route and uploaded it onto Viewranger and we were good to go.
We arranged to meet at our usual place at 6.30am, we were both early and were on our way sharpish.
As we approached Linn of Dee the overflow car park was already in use on the right hand side before you turn right at the bridge, not sure how firm the ground/field would be after a spot or two of rain.
The midges were waiting patiently for their breakfast, however they would have to annoy other folk as we were covered from head to toe and the only flesh available was our hands.


our_route.gpx Open full screen  NB: Walkhighlands is not responsible for the accuracy of gpx files in users posts
Our 'near' perfect route, we just left the track about a mile too early - continue until you reach a small cairn then head uphill

Guess who this criminal is?

The way to the white bridge from the car park at Linn of Dee, Parminder parked on the road - legally, as I forgot to bring my National Trust card

River Dee still quite low, water wise. Low cloud was a sign of what was to come

Here he comes the "masked cyclist", just as well there were no children around

Looking back and guess who was there?

This was where we left the motorway and went onto an unclassified track, the plan was to cycle as far as we could and that turned out to be about 400yds!!! We are not competent cyclists and the track wasn't very friendly to us non cyclists. There are umpteen large drainage channels as well as large boulders to try and make you fall off. The white bridge is about 3 miles, which equates to about one hour on foot or 20mins on the bike, I will let you do the maths and workout if it is worth the hassle.

The bikes abandoned, the white bridge can just about be seen in the distance

I think you can assume that the midges were still peckish

The way ahead, you can see the boulders that are put there to throw you off your bike

Path still ok for those of you with decent bikes

Looking back - at Parminder again

We found a faint path, trouble was it wasn't going in the right direction

Selfie looking back, by this time we were overheating just a tad

The Devils Point in the distance, covered in cloud

Looking back after gaining a bit of height, which was hard earned

Looking back just below the cloud

Parminder ever the trendsetter, surveying the heather and thinking "oh goody"

We found a more promising path

Looking back during our ascent of Carn Cloich-mhuilinn, glad I don't have to pronounce it

Looking across towards An Sgarsoch area

I wonder where we go now, looking down from the top of Carn Cloich-mhuilinn

Looking across towards the bigger boys

The path we were following disappeared when we reached the mush, we knew we didn't have far to go to the summit of Bhrotain

A typical path in the Cairngorms

Looking back towards Carn Cloich-mhuilinn

The shelter on the summit of Beinn Bhrotain

Photo taken by a guy from across the Irish Sea we met on the summit, don't forget to send the bill

Parminder trying to figure out how to switch on his camera

We are now ascending up towards the large summit area of Monadh Mor, looking back towards the boulder field on the north side of Bhrotain

Not far to the summit of Monadh Mor, which offers great views of the bigger hills to the east. Parminder did mention that in my previous report I didn't sound very impressed with Monadh Mor summit.

Devils Point on the right, Cairn Toul to the left of it

The final descent is about to begin, cairn marks the spot, Devils Point again - it is quite a photogenic hill, especially from the west and south

Descent from the bealach between Bhrotain & Monadh Mor, looks easy but I thought it was very similar to the descent into the Lost Valley in Glencoe - badly eroded steep loose stones

This shows how steep the descent was

I told you there were loose stones

Looking back up, can you spot Parminder?

Devils Point from lower down 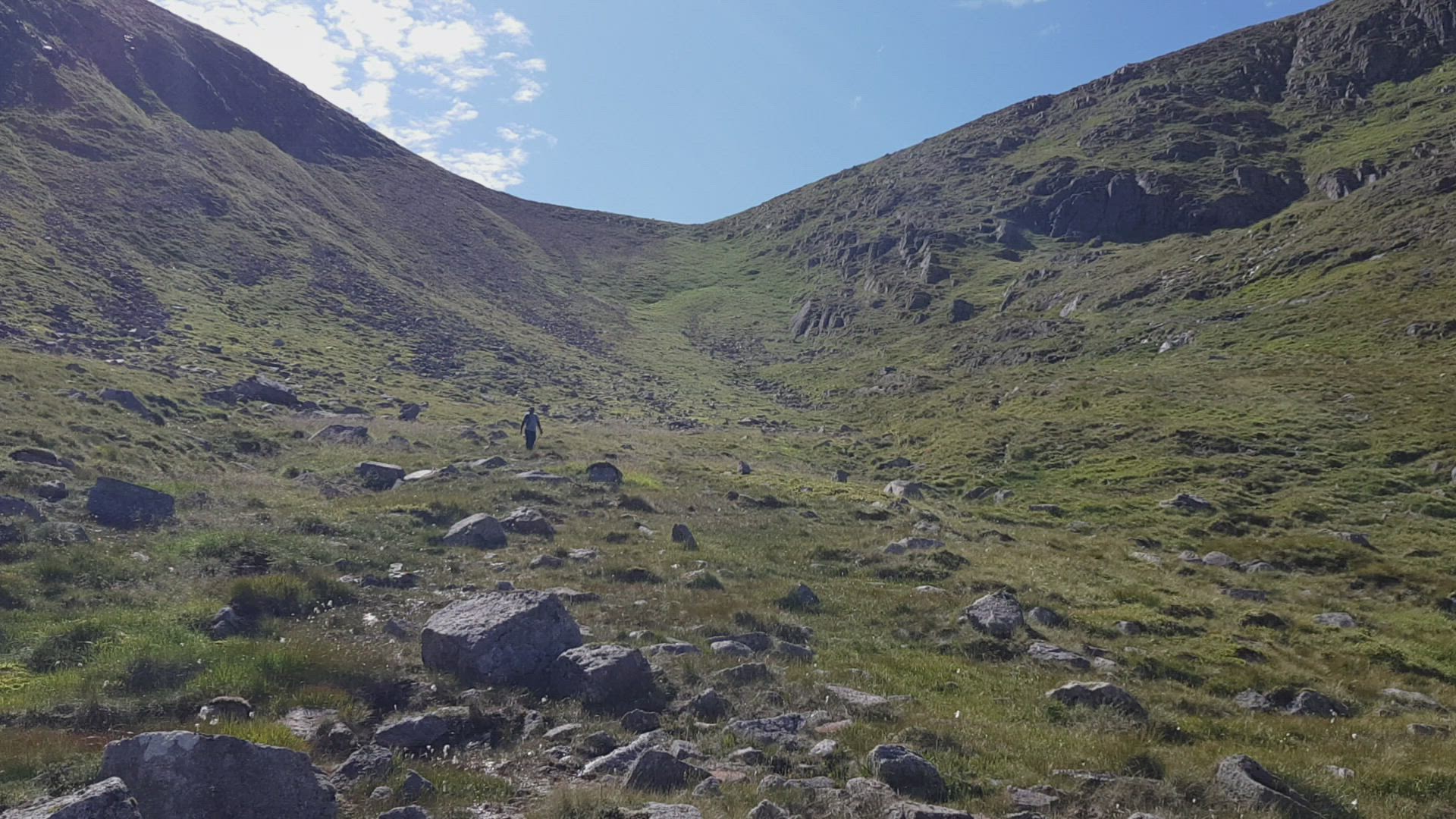 Video I took near the foot of the descent

One of the things we discussed whilst plodding along towards Monadh Mor summit was where and which would be the best descent route. If anyone else has the same thoughts, the above video will give an idea of what the terrain is like on the lower slopes on Monadh Mor.

The bits of Beinn Bhrotain you wouldn't see unless you copied our route, rather impressive buttresses

The way ahead, plenty of heather, mixed with mush and other unfriendly stuff

The way ahead, Devils Point on the left Bhrotain on the right

Devils Point, Parminder did wonder if anyone had been up that way? 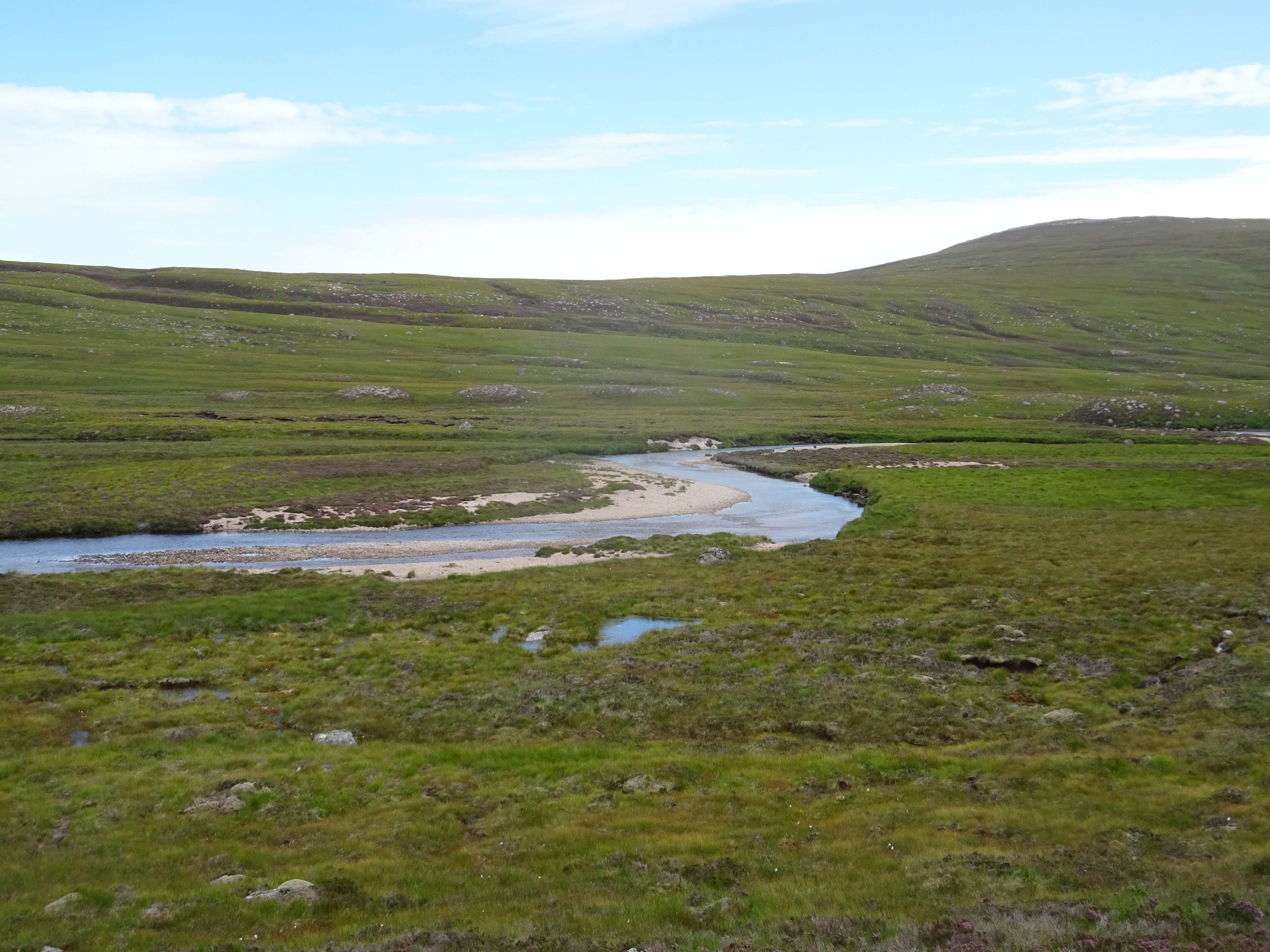 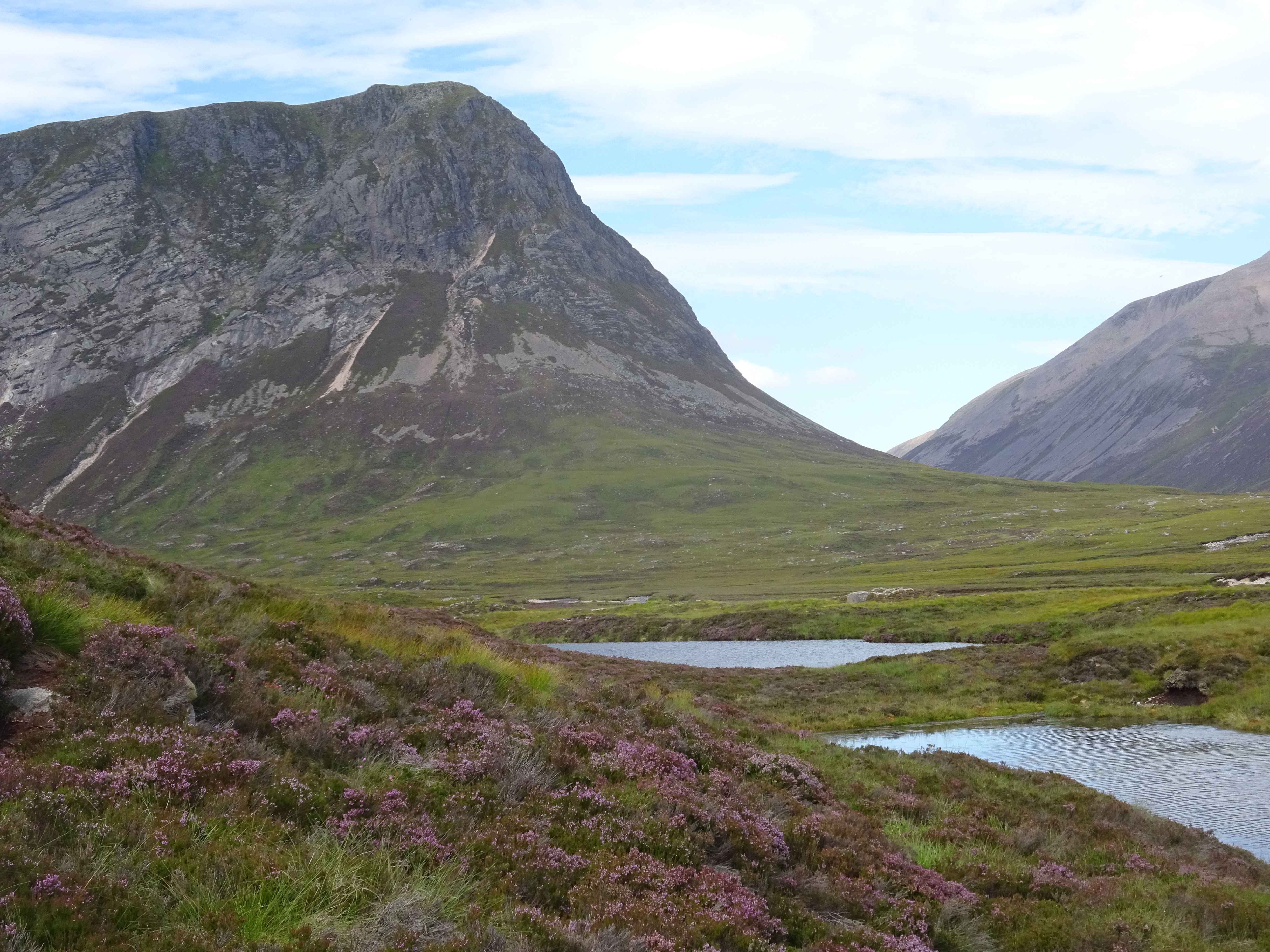 Devils Point with a his & hers lochans in the foreground, taken on my camera 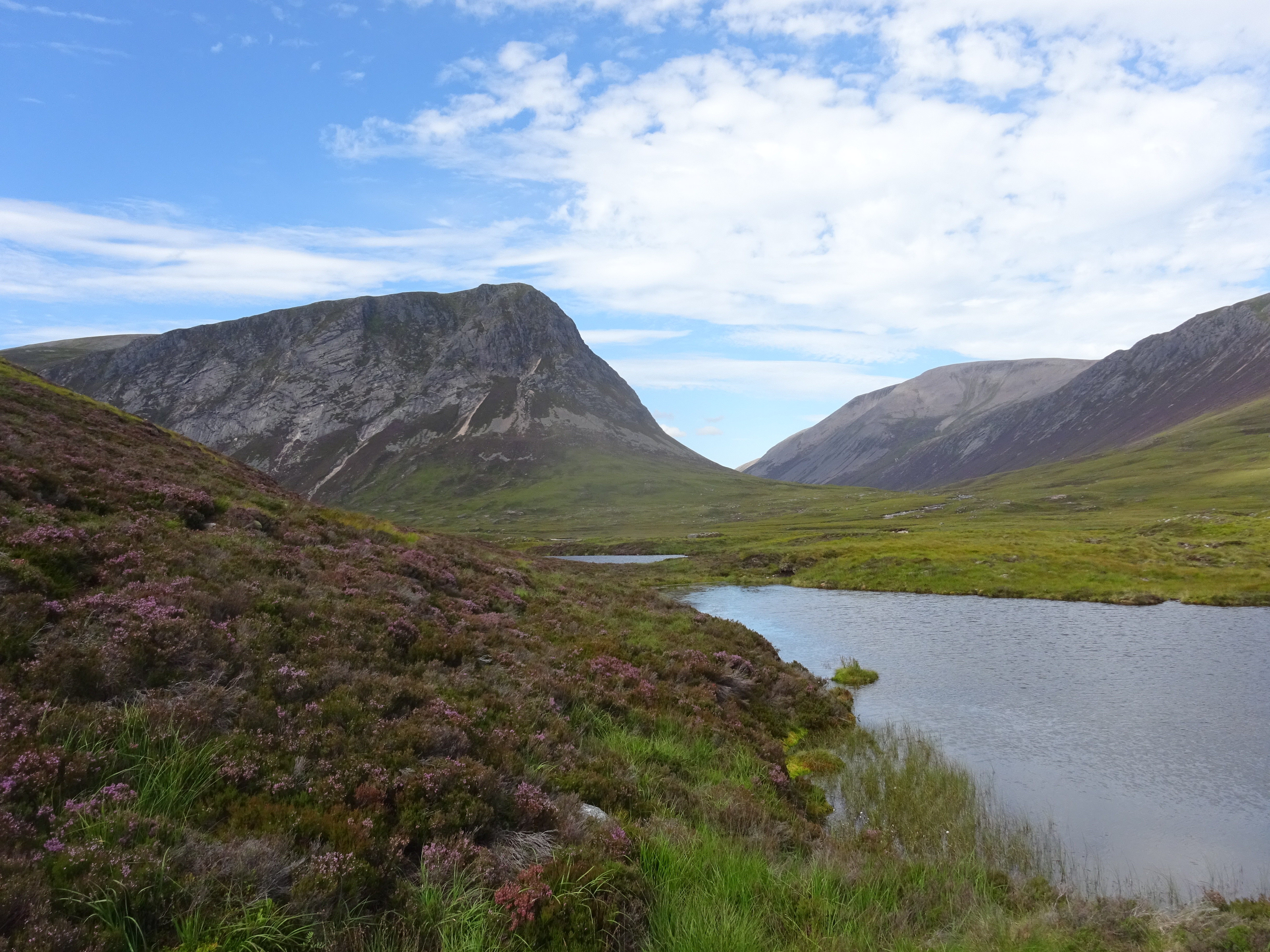 Devils Point getting further away now, thank goodness we were both getting weary, well I was

This was another cracking day and even the midges didn't dampen our spirits. The walk back to the bikes certainly seemed to last rather a long time and on checking my timings found that it took about 3 hours. A huge thanks to Parminder for driving for the second outing on the trot. We stopped at the chippy in Braemar for our fish suppers and we both agreed that the food has improved since our last visit. Now that George is back in Blighty our next outing is this weekend, depending which day is best weather wise.

Looks like I missed a good day. I haven't done the Feshie route for these 2, only this one you did and I found it pretty good. Having not to retrace Monadh Mor has to be a bonus, speaking from someone that loves ascent of course. Great pics of Devils Point, most folk mostly see it from the Larig Ghru or are on top of it.

Well done both of you, survived the midges and the Braemar chippy.

Hard shift, worth every minute. Braw script as usual FF..Thanks