Well I’m sure everyone will agree 2020 has been a strange year – who could have predicted that!
I got off pretty lightly compared to some during lockdown since I was working as normal and I was surprised that I didn’t miss heading to the hills as much as I expected. It was great discovering new routes in my local area and just spending time at home and with family.
Cycling to work and runs on my local hill kept my fitness up ready for when we were allowed back to the hills. The biggest drawback for me going hillwalking is always the travel involved (and associated climate impact) so this year has certainly been a focus on quality rather that quantity when planning my hillwalking trips and is hopefully something which I will continue. It’s always better to spend a few days in an area if possible to make the most of the journey and camping out on the hills means you are there during the best light and can experience spectacular sunrises and sunsets – what’s not to like?!
I have had a couple of outing since the travel restrictions were lifted and I finally had my first full week off of the year. My remaining Munros on round two are diminishing and I was keen to head out on some of the bigger backpacking routes I have left. With a good weather forecast, Knoydart had to be the choice.
An early finish on the Friday let me get my rucksack packed and ready for an overnighter in the hills. I was ready to set off from Kinlochourn at about 8.30 am. The car park was relatively busy with folk taking advantage of the weather and also about a million midges – I made all my preparations in the car ready to grab my rucksack and get walking ASAP to avoid them!
There was some high level cloud to start but it soon cleared and it was clear skies for the rest of the trip. The path was a bit damp in places from the overnight rain and the bracken and heather was overgrown in places – possibly due to less traffic this year with lockdown?
The walk into Barisdale is really scenic and it was great to do a different approach this time since we went in from Inverie last time on the boat. It’s a long walk in, especially carrying camping gear (took me just over 3 hours each way) but they don’t call it the rough bounds for nothing I suppose!

Ladhar Bheinn looks incredible as you come into the bay. 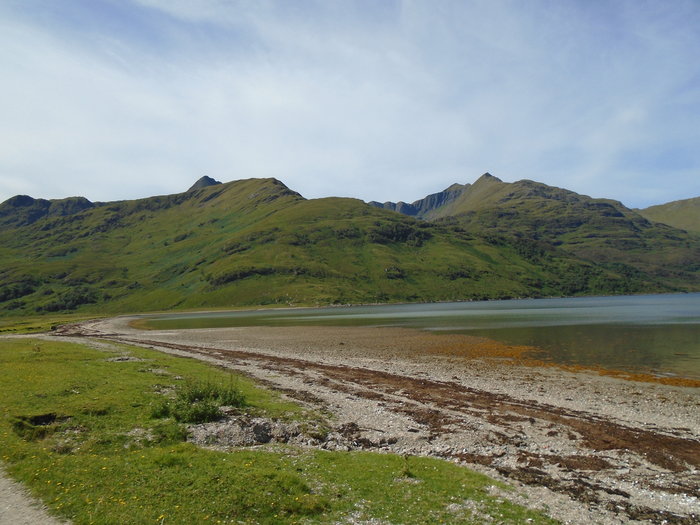 There were a few tents at the campsite and some estate workers doing repairs on the buildings (FYI the bothy is still closed just now). I met some folk who had kayaked over from Corran, good to chat to them and maybe a kayak adventure to Knoydart could be on the cards for my next visit to the area – it would be a really cool way to explore the area and means you could set up a luxury camp by being able to carry more.
I walked up to Mam Barisdale and topped up my water bottles along the way, there were loads of butterflies and they seemed to like the colour of my t-shirt – it was like being at butterfly world!
I contoured round to head up Meall Bhuidhe first. I took a slightly lower line than the gully which you should aim for but found deer tracks most of the way round the steeper sections. Looking back from Meall Bhuidhe, the gully looks fairly obvious so it probably would have been easier descending this way instead but at least I will know for next time. The views were stunning and I felt really lucky to get clear conditions this time round since we had mist the last time. 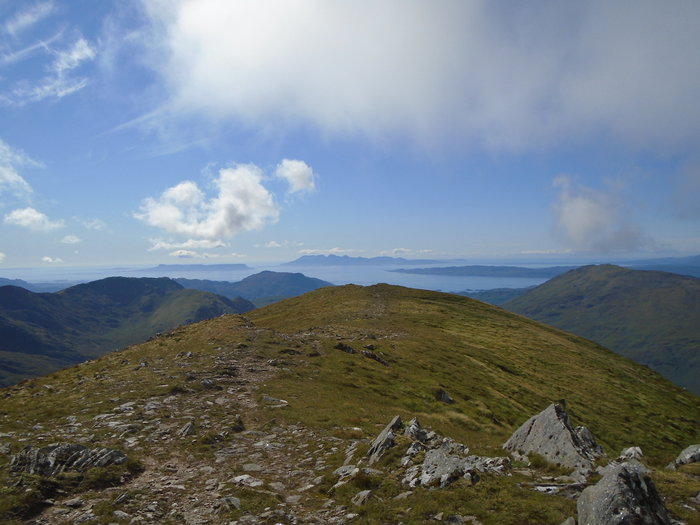 After dropping back down to Mam Barisdale, I decided to continue for a bit further since there was still plenty daylight and I hoped there would be less midges higher up. I found a fantastic clear stream higher up just before the final steep section so filled up my water bottles and gave my face a refreshing wash – luxury! There was also a big herd of deer as I was heading up, their red fur really stands out at this time of year and I noticed the grass is starting to turn too – autumn will be here before you know it.
I camped near the 879m spot height. Breaking over the final steep section to reach the top was incredible – the sun was setting behind Ladhar Bheinn and words can’t describe how amazing the views were. I got some photos and set about getting my tent up before it was too dark. Many photos later and after my supper, it was time to sleep after a long day on the hills in probably the best bedroom in the world An equally epic sunrise brought in the next morning and after my breakfast, lots more photos and then packing up, I was ready to go by about 6.30am. I met a couple who had been camping up on Ladhar Bheinn where they had also enjoyed the awesome views. There were a few rocky steps on the way up which I remembered from last time so I took my time with my loaded rucksack. I descended via the Druim a’Choire Odhair ridge which is an excellent ridgewalk and possibly one of the best ways up/ down Ladhar Bheinn I would say. 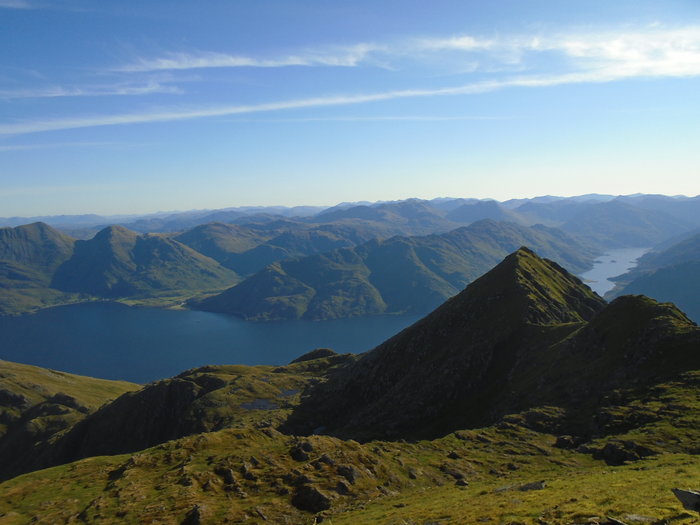 After descending it was time for the long walk back, there was a breeze at times which was very welcome in the heat. I saw a sailing boat and some kayaks in the loch and also some people at some of the remote houses dotted along the shore, it looked very idyllic on such a beautiful day. Just before reaching Kinlochourn, I saw an otter fishing in the loch, the first time I know for certain that I have seen one – wow, what a way to round off the weekend!
I met a couple heading off to do some Grahams at Glen Barisdale so let them know to keep an eye out for the otter.
Back at the car park, the midges were thankfully gone so I had some snacks before the long drive home. What an incredible weekend