We set off to do Gleouraich and Spidian Mialach in May 2014, the weather was not too bad, from memory. We did Gleouraich first, where met Matthew (Beaner001) for the first time and his friend Andy on the summit, Matthew was celebrating his 100th Munro and was looking forward to his 101st on Spidean we were in the clag so we decided to team up and do Spidean together. Matthew's springers Roy and Lochy were whizzing around as springer spaniels do, they were a bit wary of us for starters but as soon as they realised we were another food source they became very friendly.

We set off for Spidean, dropped into Fiar Bhealach and up the other side, we reached a large cairn, thought we were on the summit of Spidian, had our lunch then set off down, it wasn't until we were back to the cars that Mattthew realised we'd made an error and had mistaken the 977m top to be the summit

so from then on, we've been meaning to go back to put the error right. Matthew and Andy managed to put it right not long after, six years later we were going to do the same

August 2020, the weather was similar to our first visit, there was a bit of rain about and some of the summits had cloud coming and going, we were hoping for a fairly easy up and down, this was to be our first Munro of the year so we were not planning to do Gleouraich again unless the views from the top of Spidian tempted us on a longer outing, we just wanted to make sure of this one.

We had no problem parking at the usual start point for these two, we were early so that helped

With it being warm and moist the midges were ready for us, armed with their knives and forks, and boy, did they make a meal of us, as soon as we were out of the car, they pounced, it was a very quick boots and gear on session with the odd bit of running around waving, we must have looked like loonies

A quick walk back down the road, we found the little cairn marking the start of the stalkers path through the 'dendrons.

this is Coire Mheil, you get some good views on the way up. 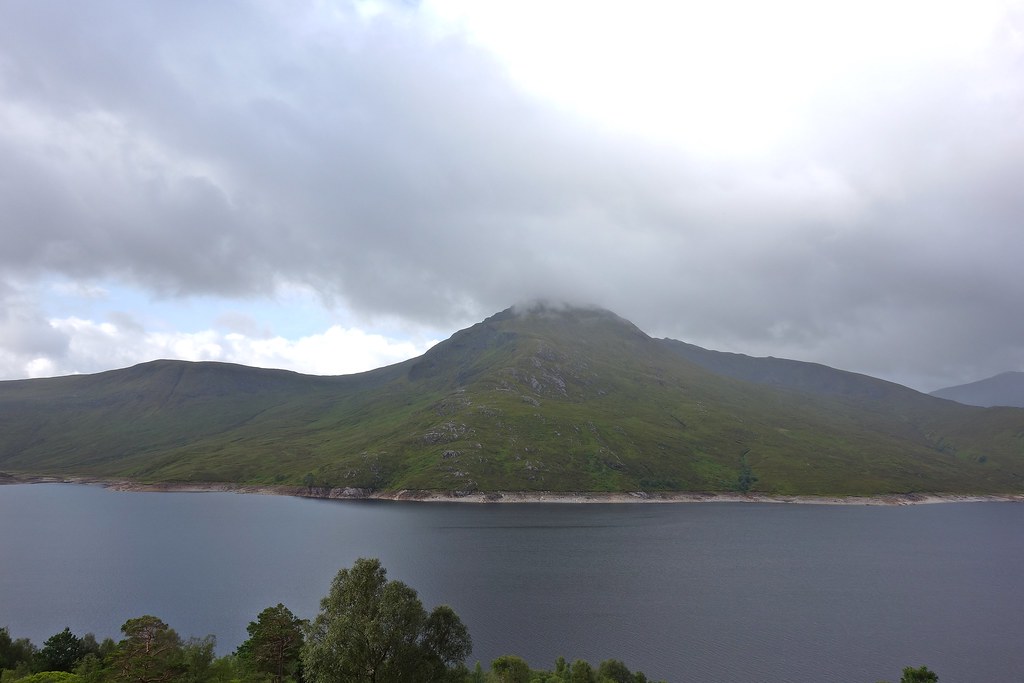 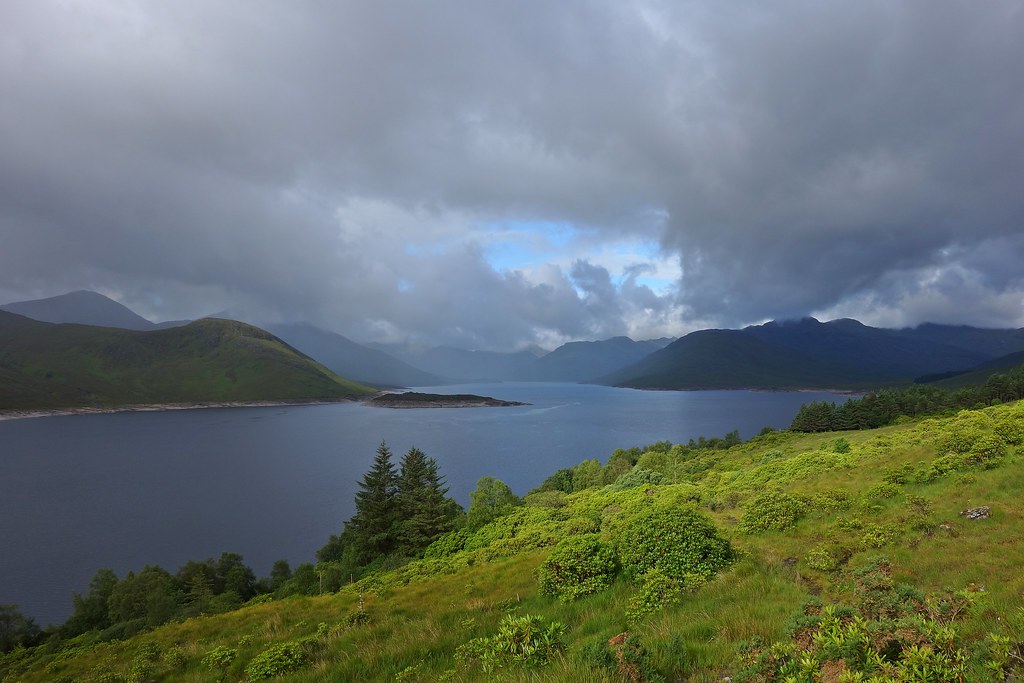 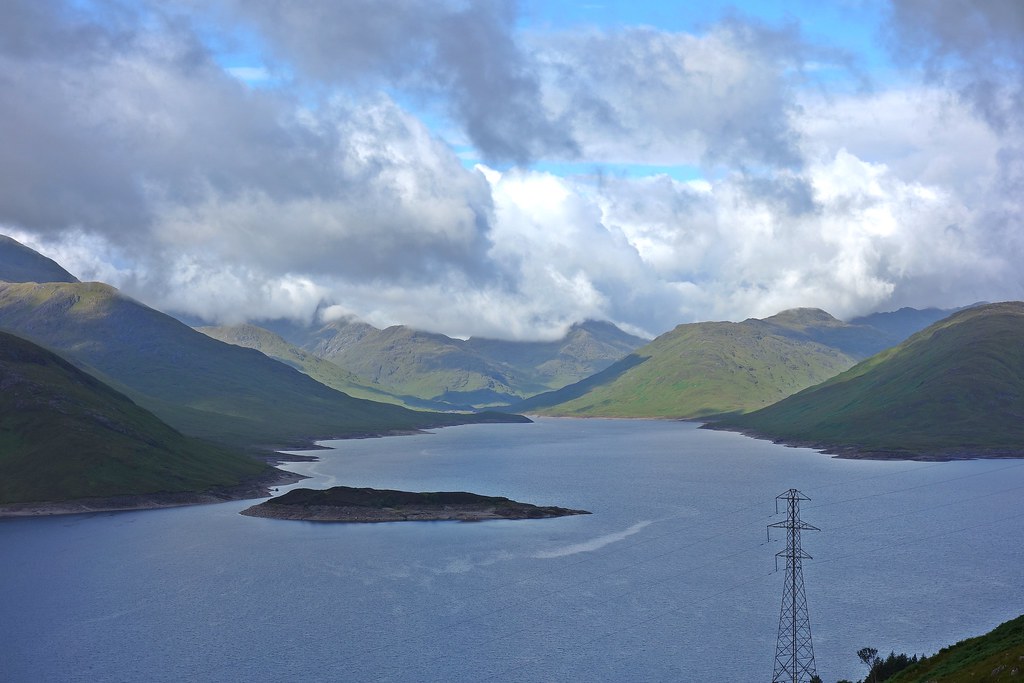 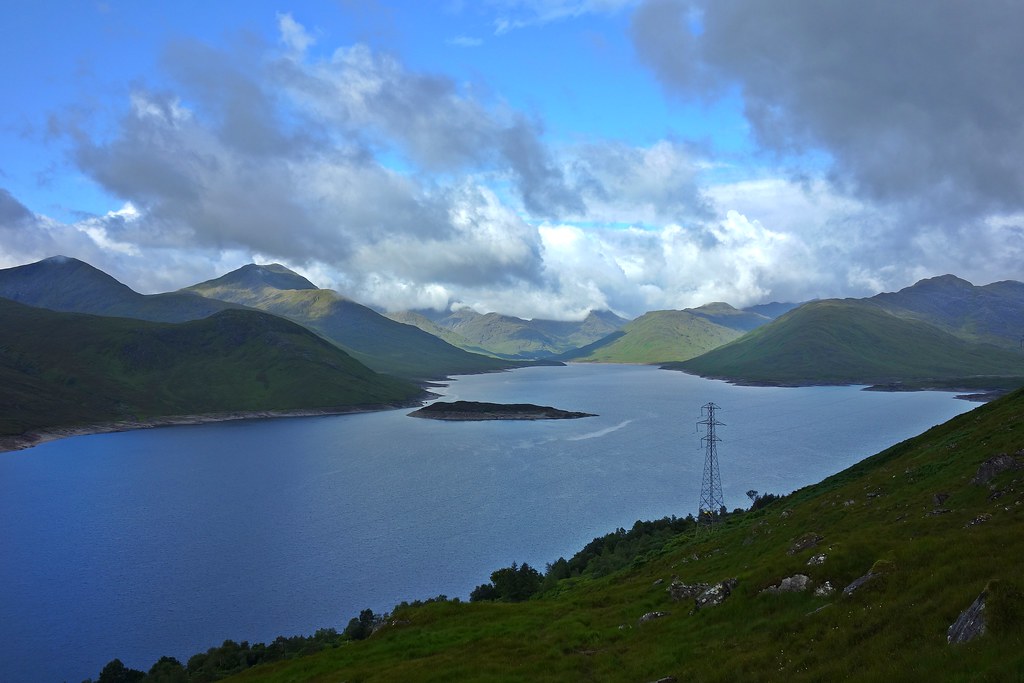 A little further on we crossed the Allt Coire Dubh, not too bad today but I think it could be interesting after a lot of rain and by the looks we were going to get some 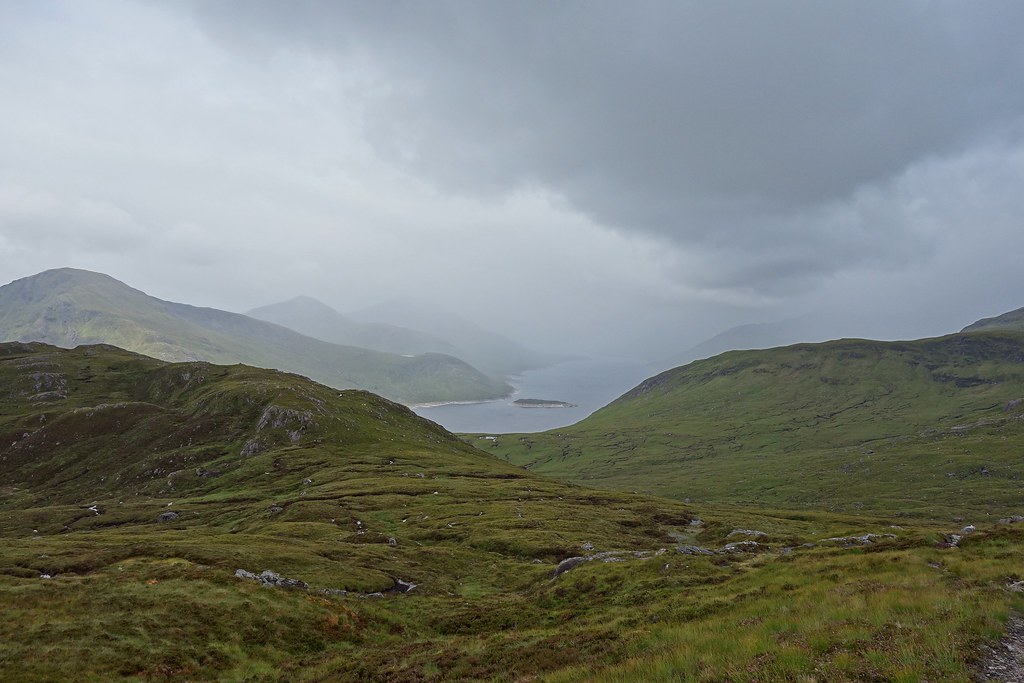 A little higher we got our first glimpses of Loch Fearna, on a nice day it would be nice to spend a bit of time by this little loch, there are places to sit near the waters edge 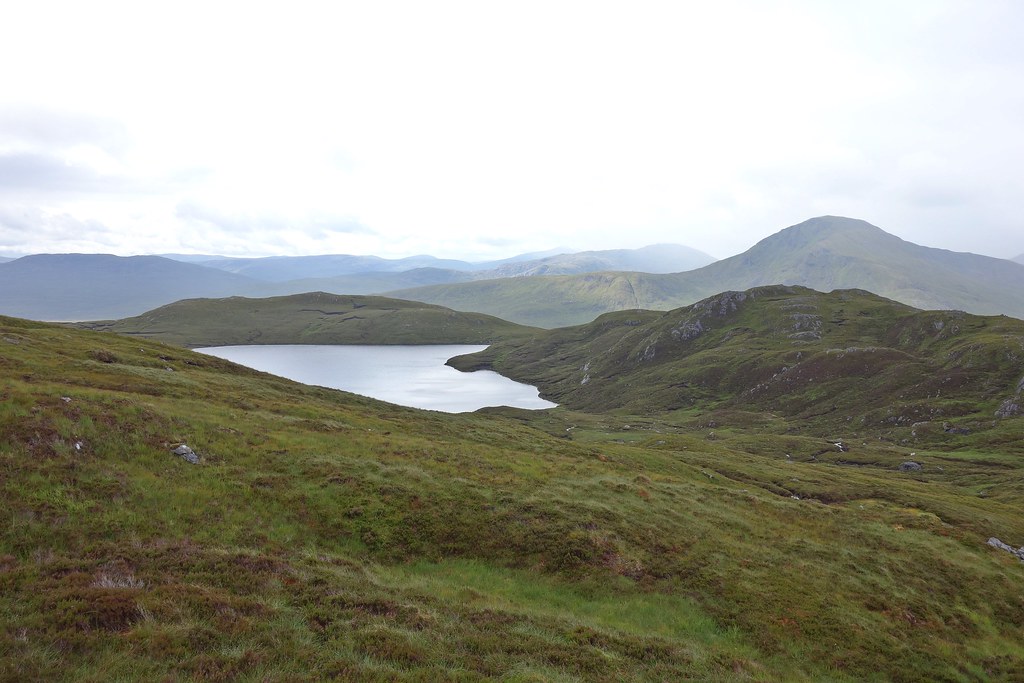 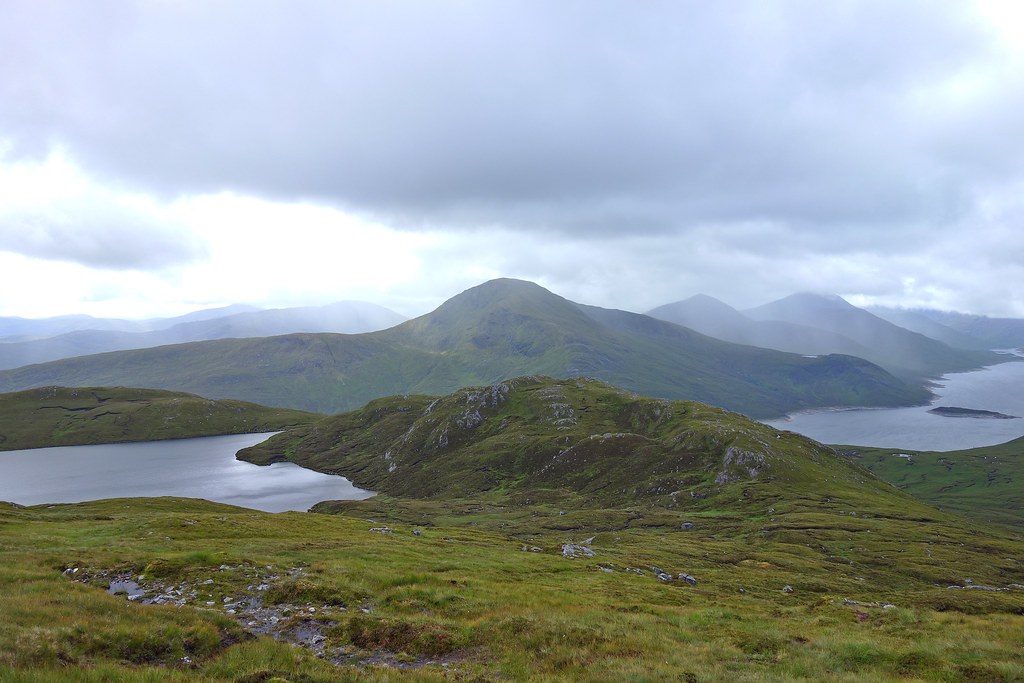 Further up the path gets a lot dryer and travels over scree patches, 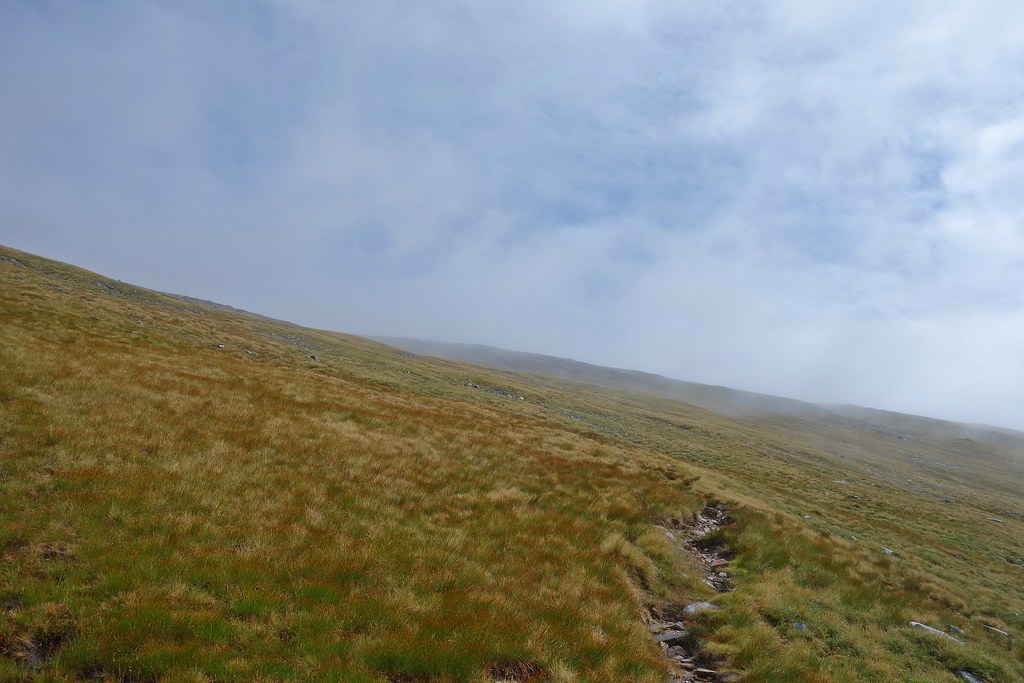 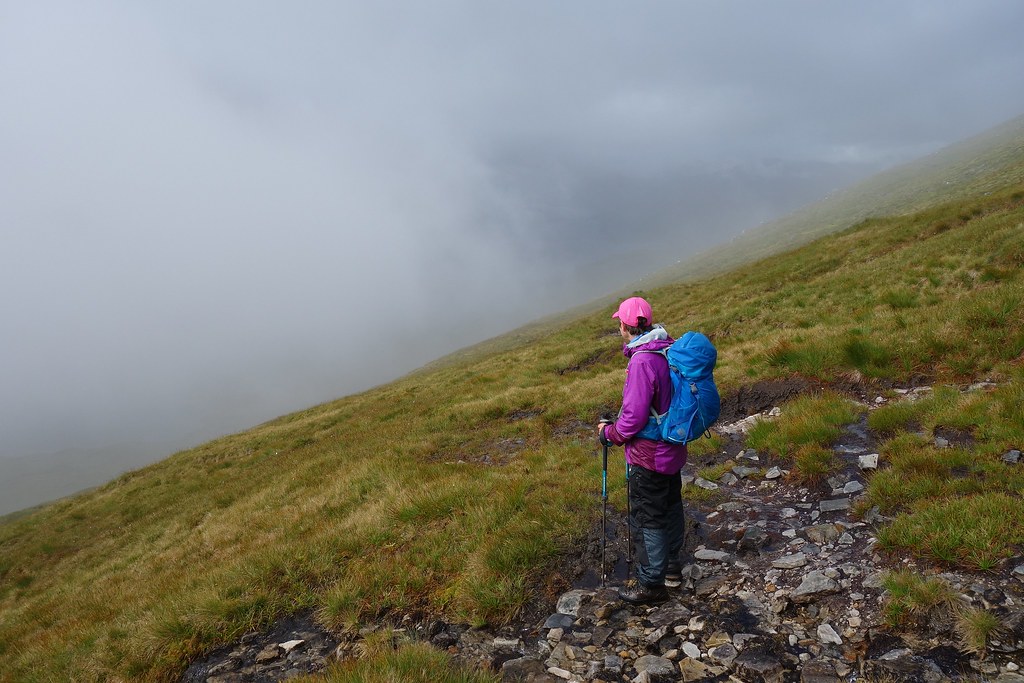 we were expecting it to head for the ridge but it took us straight to the cairn/shelter on the summit, I double checked the map and GPS just to make sure we'd got there (the cloud was down again 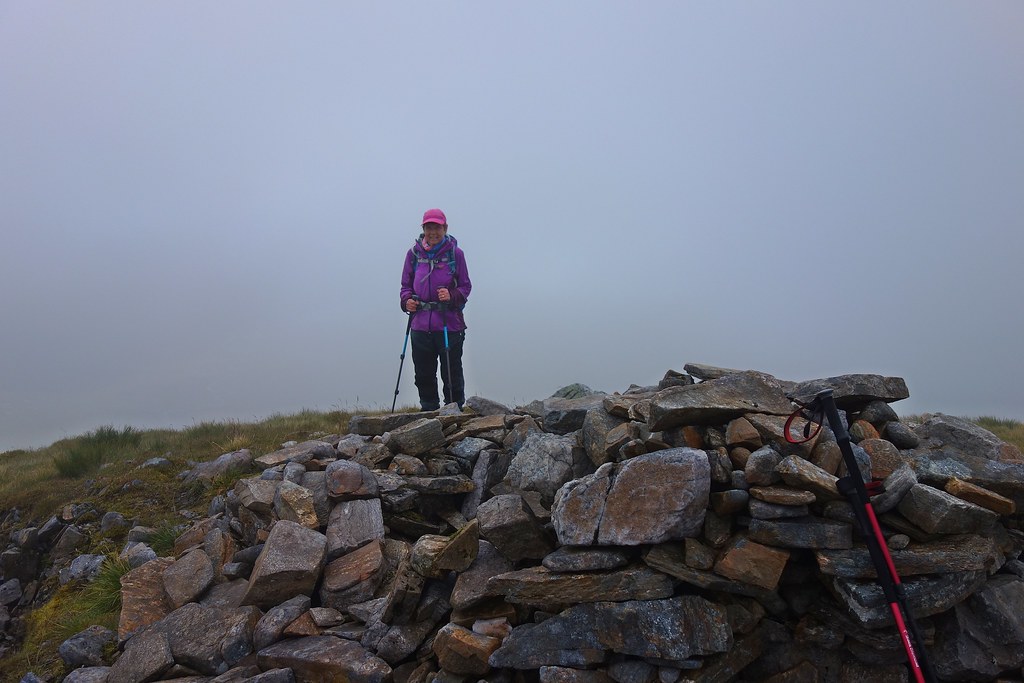 There were a few breaks in the cloud but not enough to tempt us on to Gleouraich so we sat a while on the summit, had something to eat then set off down just as a heavy shower started. 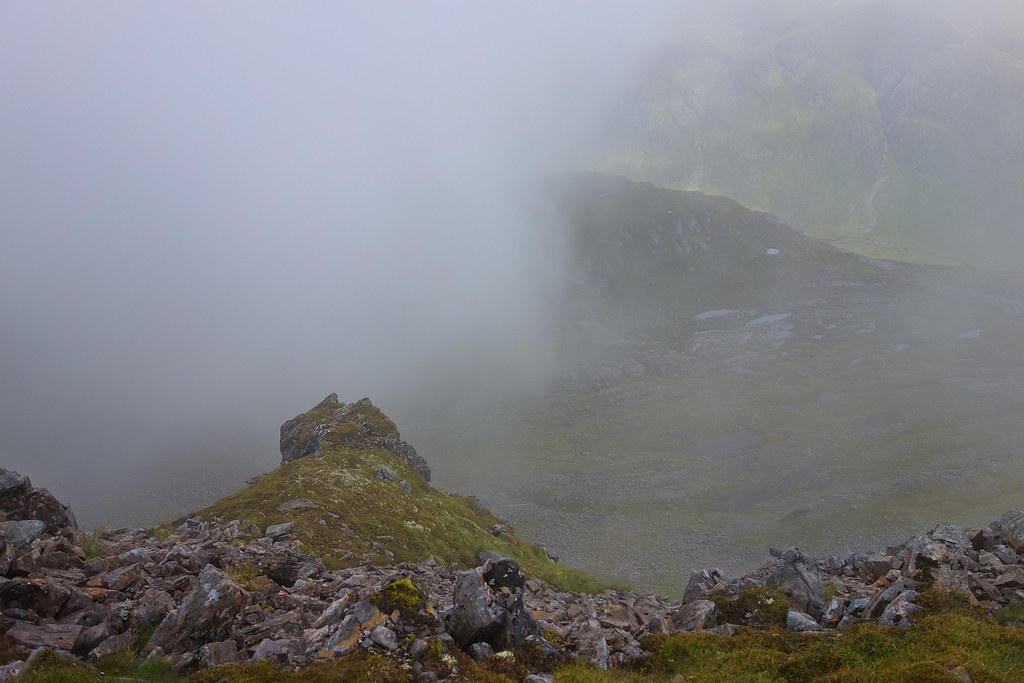 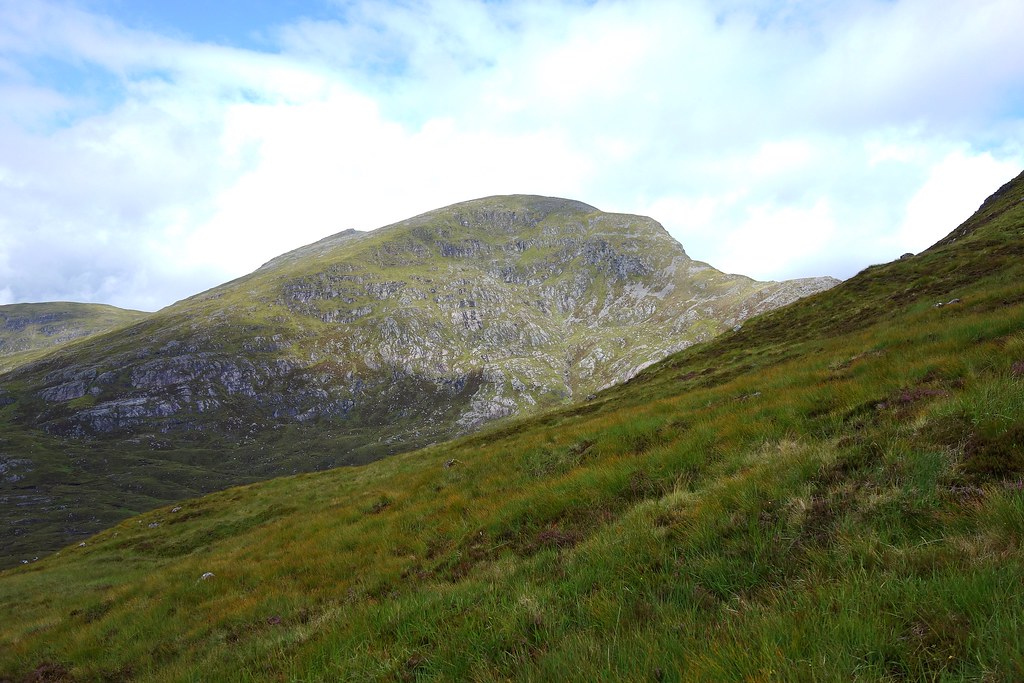 and, as usual, we wondered if we should have gone further

but, to be honest, our munro fitness has taken a bit of a bashing because of our lack of mountain activity over recent months, we were happy with our single so we took our time and enjoyed being in the Highlands again.

) because we met the Allt Coire Dubh lower down, the sides were steeper and there was not much in the way of boulders to cross on safely so we backtracked and found a suitable place to cross higher up, we can't have been too far wrong because we found the path just above the steep sides our crossing point, it surprises me how I can lose a perfectly obvious path in broad daylight 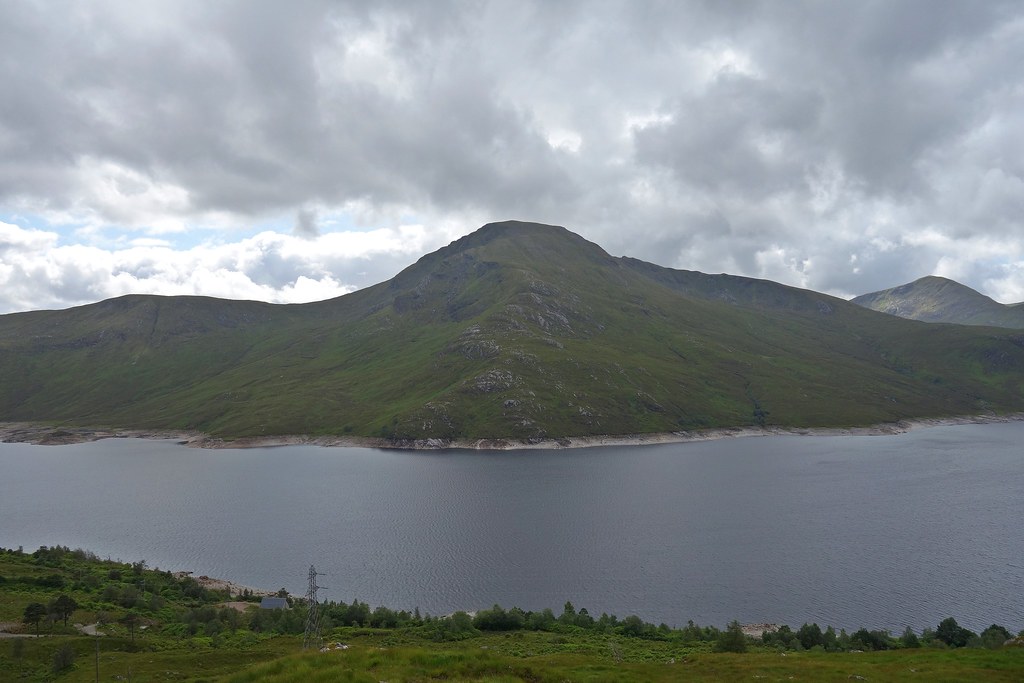 There were six cars parked when we got back to the car so we'd made the right choice by starting early and, judging by the lack of midges now, I think they'd had their fill off the poor souls that had occupied those cars

So, that was our first Munro of 2020, It was a bit more difficult than I thought it would be as far as getting into some kind of rhythm was concerned, coming down was difficult, both our knees were objecting fiercely, I was hobbling around for a couple of days after, we did another single later on in the week, walk report to follow