Completed this a few weeks ago, hence the snow, although there is a bit of snow in the Cairngorms just now. A fantastic day out which can be shortened if necessary. There wasn't many people out and about being a week-day, but I'd checked the forecast and managed to get a day off work!!

As you can see from the photos, the weather was excellent, 100% visibility, but very cold. In good conditions, there's nothing tricky involved at all, it's just a long way. The stretch from the start point to the cairn at 1083m is breathtaking in itself, with great views opening up for miles 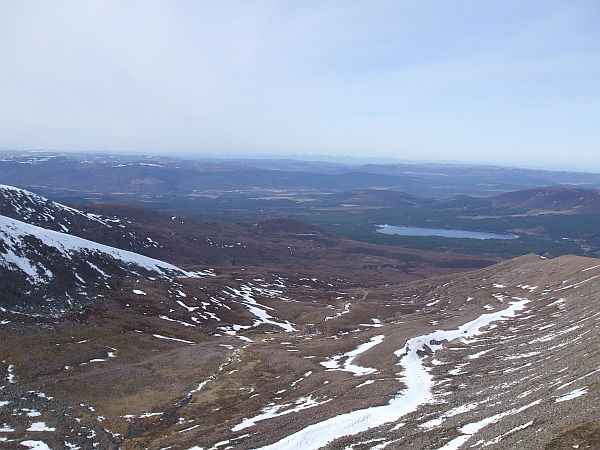 Once on the plateau, before the cairn, the wind really picked up.....balaclava-time

The incline just south of the cairn and north of the March Burn was the only point in the day where crampons were needed, just sheet ice and a drop to the Laraig Ghru not far away!! 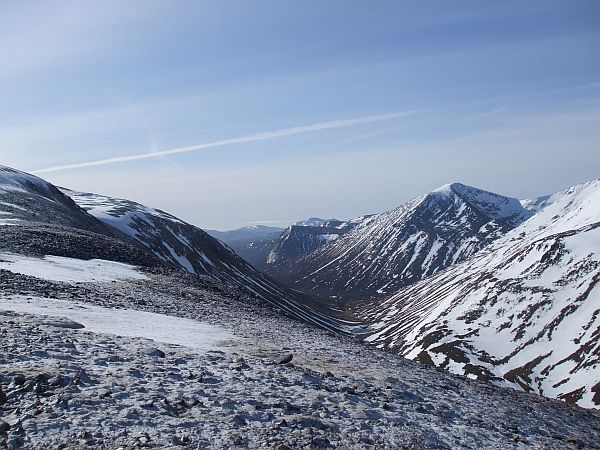 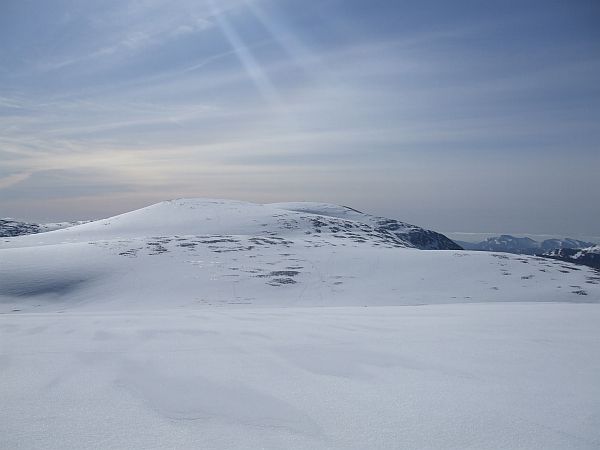 The summit of Ben MacDui can be seen and looks a long way away, but once the crampons were off, the going was good. I could see someone in front on skis, who I met at the summit. Ermanno Rambelli, originally from Italy, now living in Glasgow. He took my photo then skied off into the distance. When I looked at how far Cairn Gorm was, I wished for a moment that I was on skis as well!! Those chest pockets don't do well for the profile!! Heading over towards Cairn Gorm and could see that there were a few more people out and about. I have to remember to add an extra hour to my times as I'm forever chatting and handing out cards advertising my forthcoming challenge. At the snow-holes in Coire Domhain i chatted to a guy on skis. I was telling him about the challenge and why I was doing it. He asked me if I had heard of Karen Darke, who had been paralysed in a climbing accident. I explained that that I was going to hear her talk in Birnham in a few weeks time. The guy said that he used be a neighbour of hers and as he was a BT engineer had installed her telephones!! Surreal!!

Anyway, had a good look into the Northern Corries, few folk ice-climbing as well!! Onto the summit of Cairn Gorm, the hardest part of the day in terms of tiredness Headed off down the described route for a well earned pint at the ski centre, then off on the bus to the station. A long but satisfying day out. Some stunning shots there - love the fourth one especially, really catches the atmosphere up there. Have you recce'd your entire route?

Thanks Paul.....it was the first full day of 100% visibility that I've had in the 'Gorms, very special

I will have come Sunday!! Heading to the Grey Corries and Aonachs for 2 overnighters at the weekend. Haven't done them continuous before!! Weather looks great, not!!

Not that day......bright sunshine, I suppose!! Although I've been on the mountain before, but in poor visibility and felt a few times that there was someone walking behind me....spooky!!

hi bio-man just fond this site, liked the photos of your trip the last time I was on ben macdui was this feb ther were 8 of us in a shlter having lunch out of the wind but ther was a lot more snow on top we estimated we were around 15ft higer than normal, we returnd via the goat track a nice decent with crampons and axe required.