Our first Munro peak this year was climbed, as the title suggests, by accident

as we didn't plan it at all. On Saturday morning we packed our stuff and set off for Fuar Tholl and the famous Wellington's Nose. Clouds were still covering torridonian peaks when we parked at the layby next to the track to Achnashellach station. We hoped that these "unwanted visitors" will eventually move east as weather forecast suggested. We passed the station and followed the track uphill. After a short distance we turned to a small path heading towards the River Lair. Then out of the woods and up again! It all looked easy even though we were quickly approaching the gray wall of clouds - just keep to the path and it will take you to the top The path disappearing in the mist

At the height of about 350m the gradiend eased off and we walked out of the cloud. Views were really nice

Fuar Tholl behaved a little like a snowman on a zebra crossing: now you see me, now you don't. With clouds moving below the top of the mountain it looked like it was floating in the thin air... 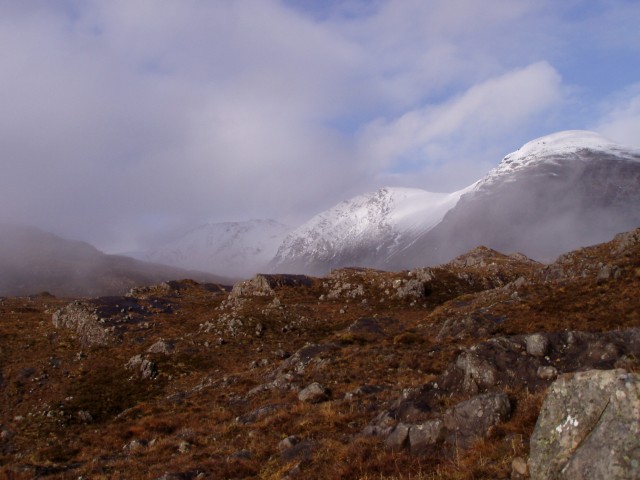 Beinn Liath Mhor in the distance

After maybe 5 minutes the mist came back again and drew the curtains over this unusual scene. We carried on along the path and - I have to admit, I don't know how it happened - we somehow missed the branch of the path heading up towards Fuar Tholl.

We continued walking for another couple of kilometres before clouds finally dispersed and we discovered thet we were too far into Coire Lair.
''If we have already walked that far'' Kevin said with a smile I know too well ''We could just as well change our target'' The bulk of Robertson's Buttress 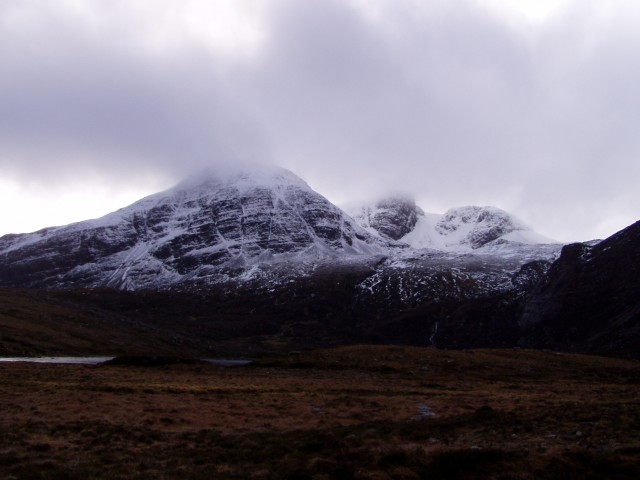 The view to the south east. That must be Sgurr na Feartaig and Sgurr a Chaorachain?...

So we continued all the way up Coire Lair to the tiny lochan, where we left the path and tackled the steep white slope of Sgorr Ruadh. Before that, we took another chance to admire the mighty buttresses... The wall of Beinn Liath Mhor

For the final climb we entered the silent white world

. Clouds surrounded us again and navigation became tricky. We slowed down and carefully picked our way up. In places, there was snow up to our knees, and pure ice underneath it. Crampons helped a bit, but the last 50m of ascent up the steep craggy slope squeezed a few f words out of me

and such reaction doesn't happen that often. As we were maybe 20 m from the top, clouds moved on and we managed to see at least a glimpse of the breathraking views... The white world of Sgorr Ruadh Eventually we reached the summit cairn and we were lucky - most of the fog was gone and distant clouds over the tops of other Torridon hills only added a twist to the views. Wow, I was impressed! 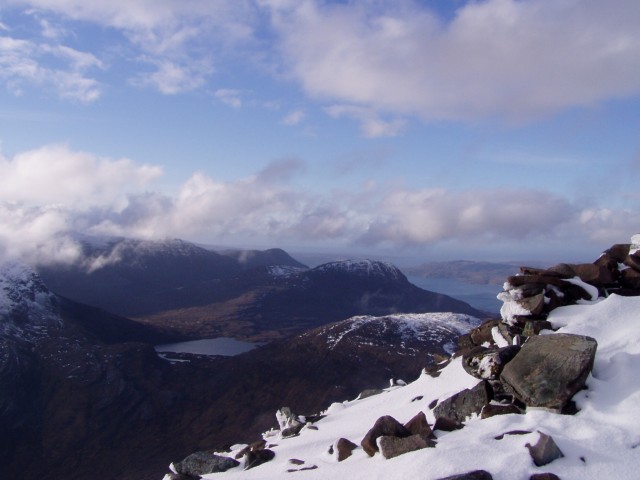 To complete the traverse, we descended the southern slope of Sgorr Ruadh, walked past Loch a Bhealaich Mhoir and eventually we joined the Fuar Tholl path, the one that we had missed earlier

. We followed that path down, walking in the shadow of the splendid Mainreachan Buttress. Unfortunatelly my camera batteries went on strike, probably due to cold 
our_route.gpx Open full screen  NB: Walkhighlands is not responsible for the accuracy of gpx files in users posts
To sum up, I don't regret in the slightest that we changed our route, so I could feel the injection of adrenaline in my veins while scrambling to the top. Another adventure added up to my diary and another Munro peak ticked off. Still, a long, long way to go before (if ever) I complete the list, but I certainly want more!

Fuar Tholl is just as good though (or maybe even better?), so something to look forward to anyway

If you can get onto the Leth Chreag ridge lower down (requires a bit of pathless heather), there is a good easyish scramble up the east ridge. Much better than the normal route up the scree, although a little bit exposed.

A great report, with excellent photos.thanks..I liked the bit about squeezed f words out!! made laugh

so im not the only 1 who breaths out their butt & swears....

Paths are dodgy things to follow...I have been in all sorts of trouble following them...much better on the open hillside following a bearing I'm not too bad at finding paths in autumn sunshine.

Brilliant report there BP! Next time I'm back in Torridon, Fuar Tholl was definitely to be on my list, and I'm sure I'll want to take caere of Sgorr Ruadh as well. Love that TR title too - had me imagining some doddery random elderly person who just popped out for a pint of milk and some bread and kind of accidentally climbed to the top of a Munro!

Love the report and the pics, I confess the title made me think you had somehow wandered to the top before realising

Great report and pics. Very much like the idea of climbing a hill by accident. Might try that one with the wife -" Yes I know I left the house 16 hours ago to go to Tesco for a loaf, but I climbed a mountain by accident on the way"

andyfitz wrote:Great report and pics. Very much like the idea of climbing a hill by accident. Might try that one with the wife -" Yes I know I left the house 16 hours ago to go to Tesco for a loaf, but I climbed a mountain by accident on the way"

Reminds me of a guy I once heard about who told his wife he was popping out for some bread and milk but didn't come back for a week. He'd gone off to a match in the Czech Republic with the Tartan Army!

Hmmm, it looks like I started an interesting debate here... The most ridiculous excuse after disappearing for a long time

Well, actually we did shopping on the way back... Milk, bread and a bottle of Chillean Rose

andyfitz wrote:Great report and pics. Very much like the idea of climbing a hill by accident.

I too like the concept; I once accidentally climbed Sgurr Alasdair, the highest peak on the Isle of Skye.I only set out to go fishing in a lochan in Corrie Laggan, and ended up clinging to the summit rocks with a fishing rod in one hand. Didn't catch anything. Another time in the Galloway Hills the fastest way home after a fishing trip was to climb over the Merrick. The fishing tackle gets some odd looks from goretex-clad hillwalkers.

Fantastic report with some really excellent, dramatic looking photos. I love that area - short of being in Torridon, looking onto the Torridon hills is great. I have grand plans for a return to this area - plenty of awesome hills to "accidentally" climb in the Coulin forest

Brilliant pics! I'm hopefully doing this walk on friday. Is it suitable to take your dog?

will bliss wrote:Is it suitable to take your dog?

It should be OK for a dog, I don't own one so I can't tell for sure, but there's a path most of the way up. The only scramble-ish part is the final bit to the summit and it was a real nuisance in snowy and icy conditions, but in good weather it should be fairly easy.
Have fun in Torridon

Wonderful pictures - an inspiration for us. Hopefully one day we might get there in winter. Sgurr Ruadh looks so spectacular from the north - if things go well it might be our next Munro, hopefully as we're planning to visit Torridon again next summer!