I decided to take advantage of a beautiful crisp winter's day and go for a couple of local Grahams. As my winter mountaineering skills are patchy at best, my peak-bagging conquest is limited to Grahams and the odd Corbett until things warm up a bit. I took the Citylink bus up from Glasgow to Inverbeg. I had 6 hours before i had to be back for the 4 o clock bus, which I reckoned should give me plenty of time. Turned out it was JUST enough time, as what looked to be a shortish round on the map proved to be a tougher proposition on the ground, with rough pathless walking over snow and tussock grass, and plenty of ascent for a short(ish) walk over a couple of 2000-ers. I'm steadily running out of hills I can bag using public transport from Glasgow... so much for reducing the carbon footprint!

From Inverbeg I took the minor road (signposted Glen Douglas) for just under ½ mile, before turning sharp right onto a clear track as the road curves slightly to the left. Where the track enters a forest I turned left off the track, following the forest edge steeply uphill. After 120m or so climb, I kept with the boundary fence as it angled to the right then left. Ben Lomond appeared close at hand over the trees, looking majestic. The view of most of the length of Loch Lomond wasn't bad either. 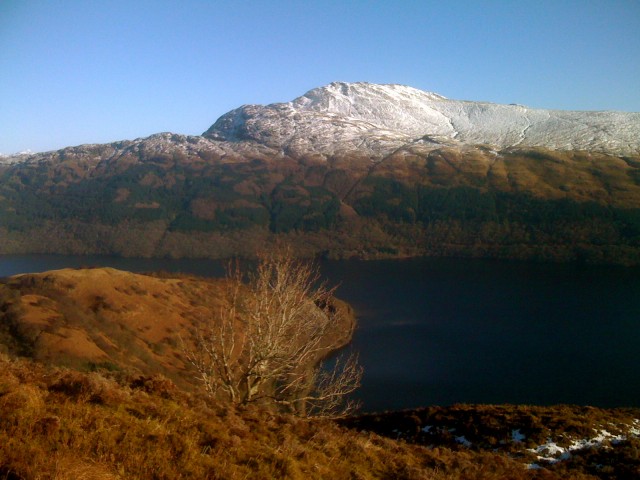 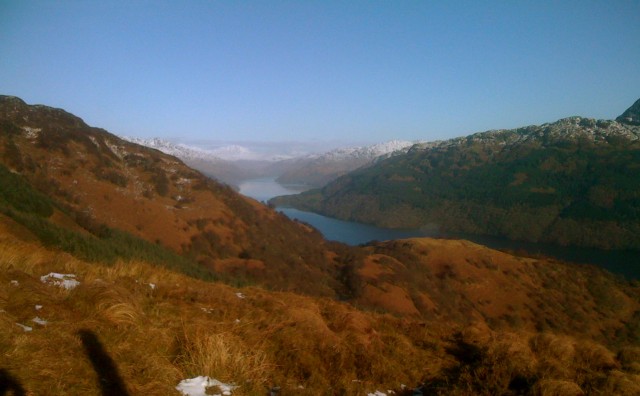 I soon reached a massive boulder where the fence turns right across the hillside. I maintained my course over pathless open ground, climbing steadily then more steeply, the Crianlarich Hills now coming into view. The bogs and tussocks made for fairly slow going, but soon enough the trig point appeared, perched atop a nice little rugged crest. Lovely summit this one, with cracking views, the contrast between the more rounded Luss Hills and the gnarlier form of the Arrochar Alps clear to see. Topographically, these hills appear to be somewhere between the two. From here it was a mile and a half along the broad ridge and across the peaty bealach to Ben Reoch. At the bealach, an icy bog provided a good foreground for a shot of Ben Lomond. A short climb took me to the summit cairn. Being a mere 15m or so away from Graham status, I guess the more single-minded bagger could bypass this summit, but it would be a shame to miss it as it gives perhaps the best views of the round. The uninterrupted view of The Cobbler, Beinn Narnain and A'Chrois standing guard over the head of Loch Long is magnificent, while to the right Loch Lomond snakes away, backed by the Crianlarich Hills. 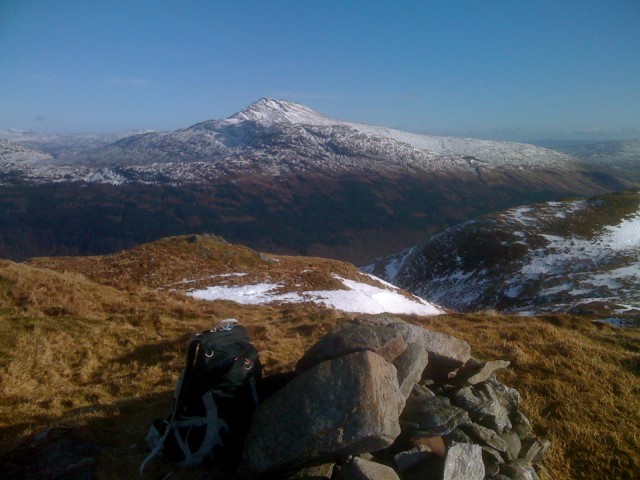 After a quick stop, it was off to the 3rd summit of the day, Tullich Hill. To get there though involved a steep descent of 300m then equally steep re-ascent of 270m. I could see from here the broad rib I wished to follow up Tullich Hill, to the right of centre, and it looked straightforward enough. Somehow it looks more of a challenge in the photo! Off Ben Reoch I roughly followed a line of rusting fence posts, taking care to avoid some craggy outcrops further down. Not always easy when this is the view to the right! A couple of inadvertent bum-slides later, I found myself at the bealach. Having negotiated the inevitable bogs, I was soon heading for the rib which would take me to the summit. I found it to be mainly grassy with a couple of scrambly bits. My tiring limbs were forcing me to stop more often now, which was no bad thing as the view of Narnain and The Cobbler was compelling. A few false tops took me to the summit area. A whole complement of Arrochar Alps provided a stunning backdrop to a frozen lochan. I rounded the lochan to reach the cairn, stopping for well-earned tea and sarnies. I looked back at the way I'd come, with Ben Lomond sitting pretty over the shoulder of Beinn Bhreac. In the opposite direction, beyond Cnoc Coinnich and The Brack, the quiet Cowal peninsula beckoned me as ever.... definitely on the "to do" list! 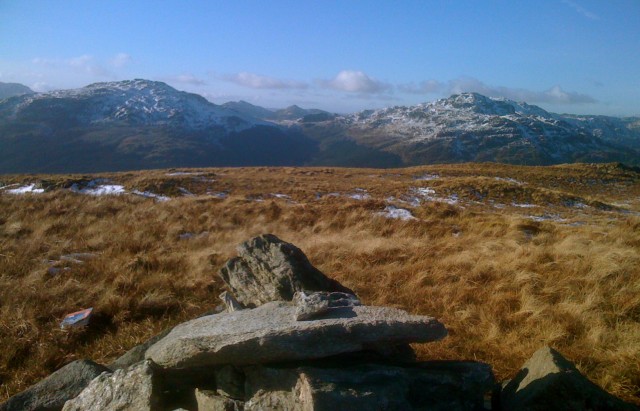 Much as I wanted to linger, I had a bus to catch, so I headed off the hill following a spur to the south-east, stopping briefly at twin boulders halfway down to catch my breath. At the base of the spur, I made a beeline for Invergroin (painful!) as the low sun began to dip behind Doune Hill across the glen. A 3½ mile march along the road brought me back to Inverbeg. Just time for a few slurps of tea before the bus arrived! A tougher day than I'd perhaps anticipated, but a rewarding one as always.

Might give this one a go as a wee warm up for the nearby munros.

This looks great. I didn't realise the more northern of these hills were as rocky. Kind of makes me wonder why there are so few reports on these, as they are very accessible and have great views.

Great report and some stunning pics - really enjoyed it, thanks for posting

Cheers all, I can heartily recommend it!

Yeah Malky, I wondered that too... I guess folk just pass them by in favour of the popular routes nearby. Great if you crave solitude.. didn't see a soul! I often find the views to be at least as good from some of the lower summits as well, perhaps because they're generally more isolated than the munros...

Thursday was one of the best days to get out. I seethed in the house with a nasty chest, thinking about all the walkers out thay day

yup, good days seem to be few and far between at the mo.. got to take advantage when they come along!

Thursday was peachy over here on Arran too... and there's plenty you can do here via public transport from Glasgow

Enjoyable report Matt. Loved these two hills on a winter day last year - not nearly as clear a day as yours though

. You get cracking views of the Arrochar Alps and Ben/Loch Lomond

Good report, might just pop up and attempt these tomorrow. Like you, my winter skills are minimal, so good to see a report on some local Grahams. Cheers for posting