Early start from the car park just before Glencalvie Lodge. The weather forecast had worsened but was still expected to remain dry for much of the day. The strong wind off the south might make the cycle down Gleann Mòr more challenging than usual although I was hoping that the surrounding hills would give some shelter.


Carn Ban and Beinn a Chaisteil 7.8.2020.gpx Open full screen  NB: Walkhighlands is not responsible for the accuracy of gpx files in users posts

Initially westwards before crossing the Alladale River just south of Alladale Lodge then cycled along the estate track down through Gleann Mòr.

which I didn’t realise until I was well down Carn Ban – I had accidentally set the camera film speed at ISO 3200 hence the reason that the next few photos are extremely grainy and washed out despite my best efforts on the home PC afterwards – many of the photos were just not useable.

Nice morning and the sun was starting to rise behind me. 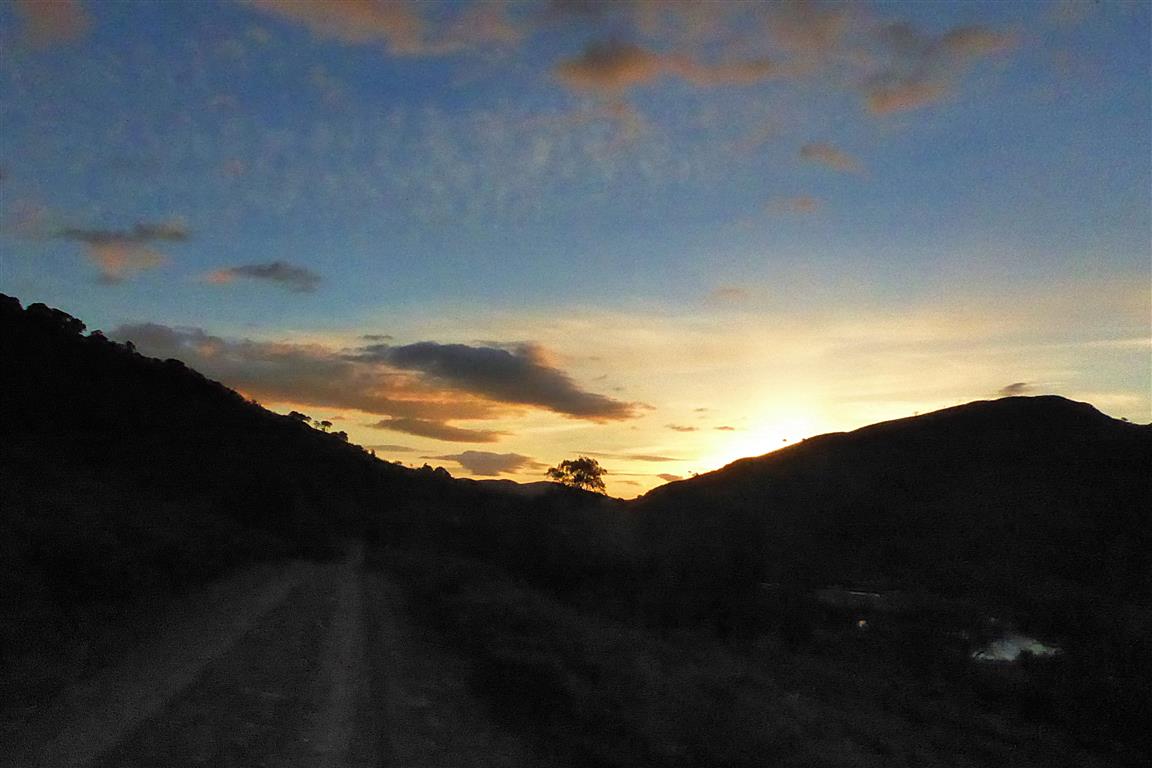 Little to say about this bit as I just kept going. Further down a bit before the track crosses the Abhainn a’ Ghlinne Mhòir, I came across a herd of Highland Cattle spread across the track. No way to get through them but, as I got nearer, they started ambling slowly down the track. I just followed at a rather sedate pace through large clouds of flies and midges as it was sheltered from the wind. 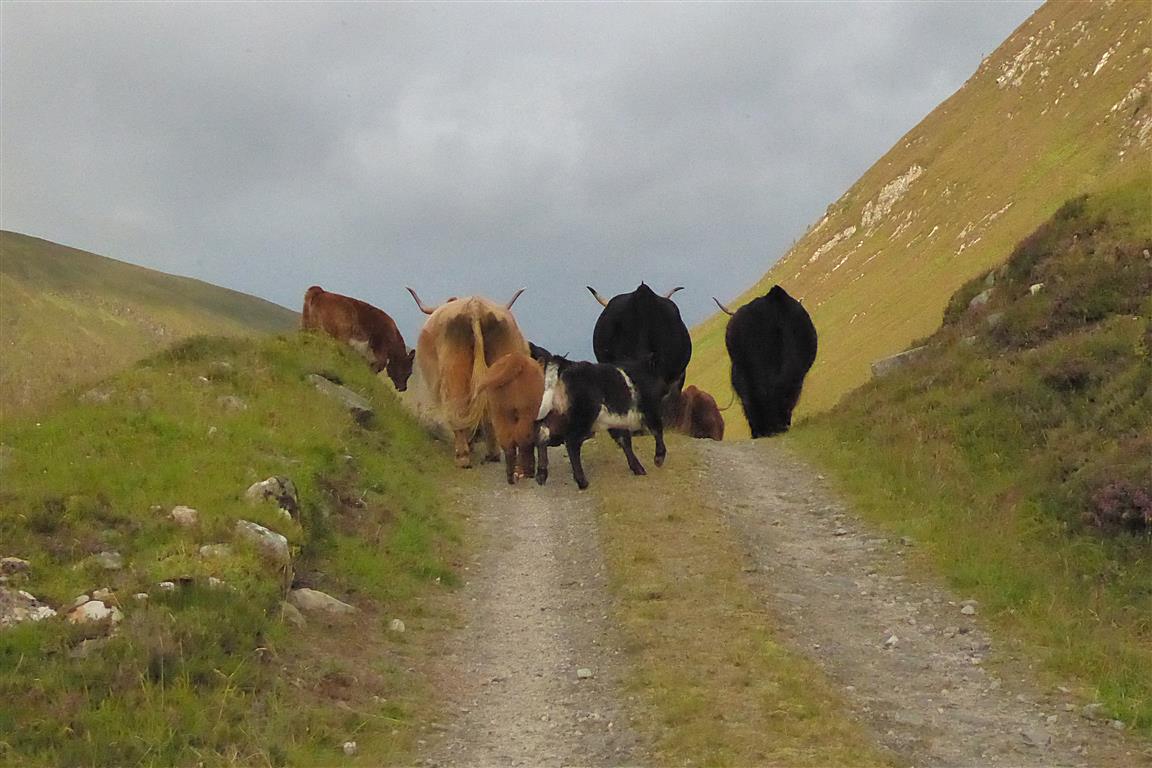 Fortunately the herd decided not to cross the bridge and continued straight on. I then crossed the bridge, cycled past Deanich Lodge then right at the next junction then down to cross another bridge. 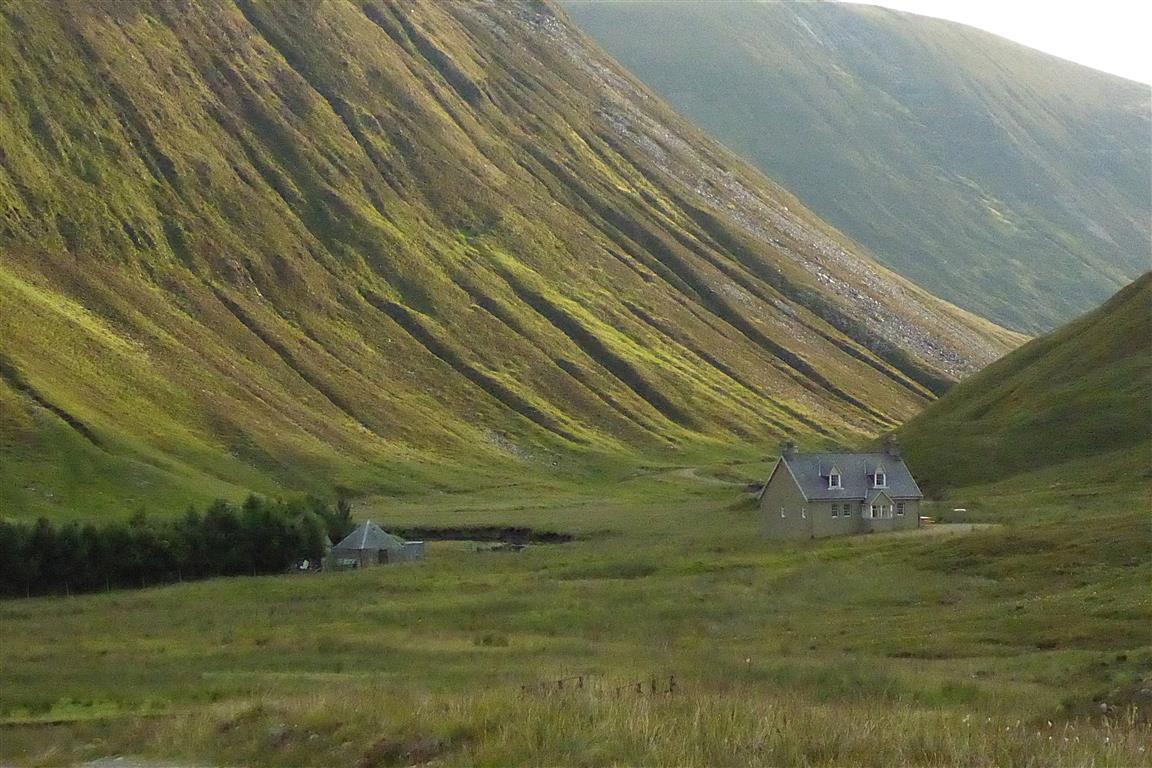 I cycled up the track a little before leaving the bike just below the hydro dam. Off up the stalkers path which took me to about 550m or so. The clag was now well down and I couldn’t see anything so just kept going NW then W up to the summit.

Summit cairn in the clag 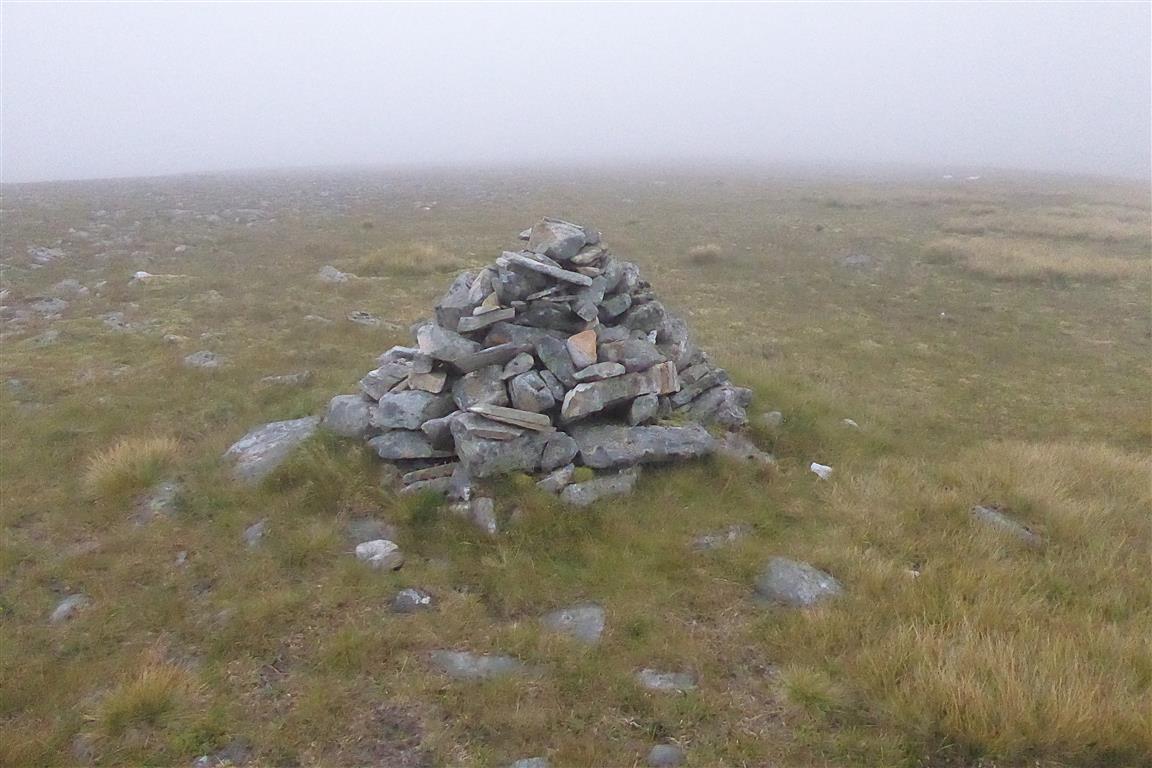 I had been hoping to be able to see the Seana Bhraigh cliffs but the weather wasn’t wanting to play ball. Waited a bit and it did clear a little for a brief moment – quickly got a photo of the Assynt hills before it closed in again. 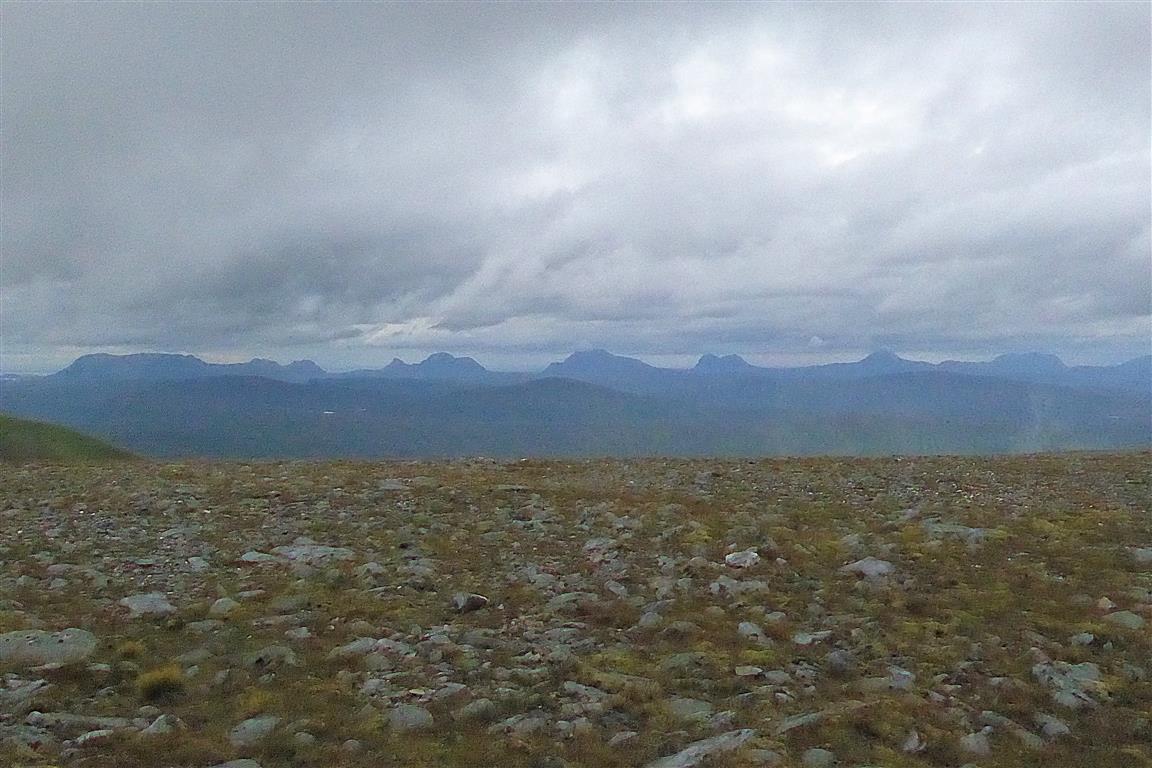 No point in hanging around so I headed back the same way. Needless to say the clag started to lift as I got further down. Part way back I realized the ISO setting was at 3200 and corrected it. Still some snow higher up. 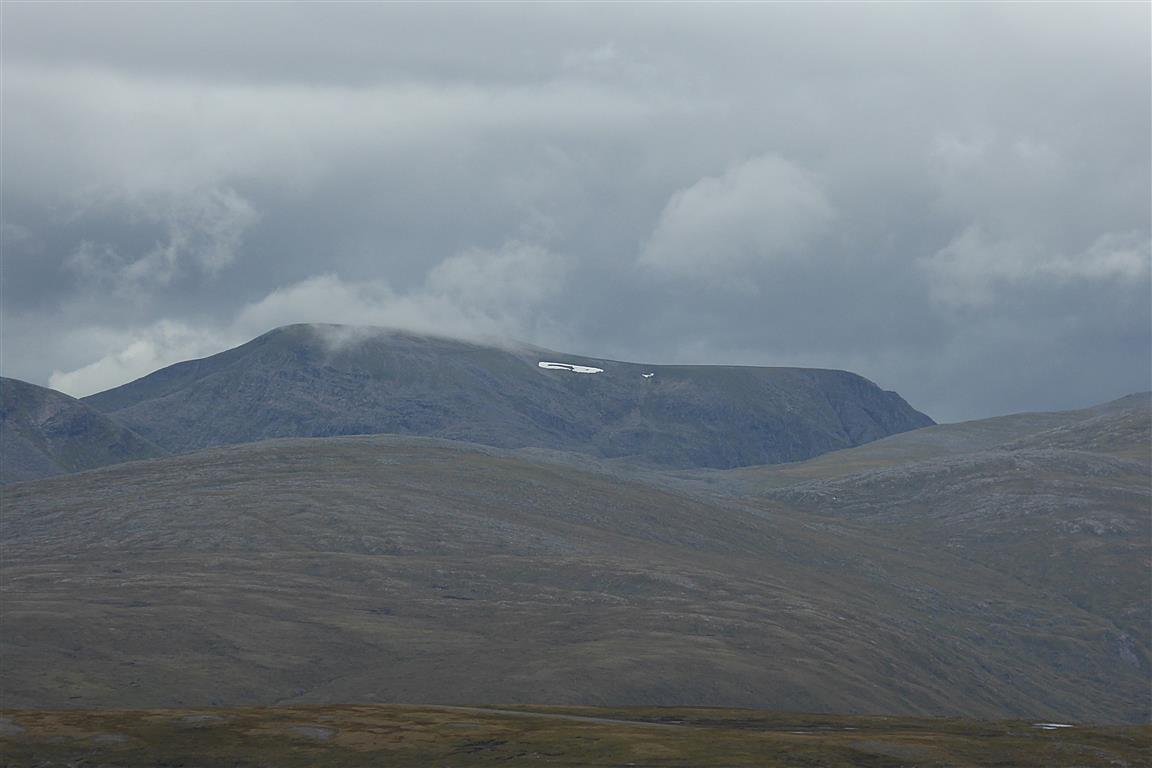 Did manage to get a glimpse of Seana Bhraigh after all although the low cloud was making everything look a bit murky. 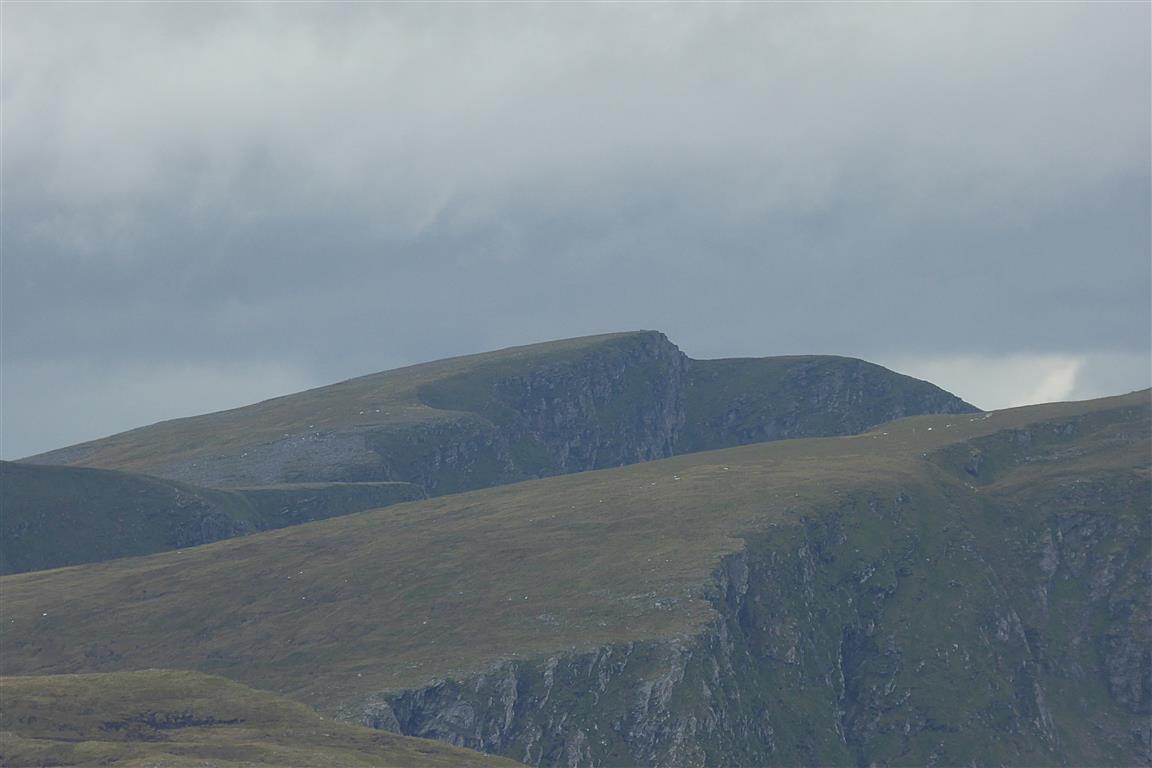 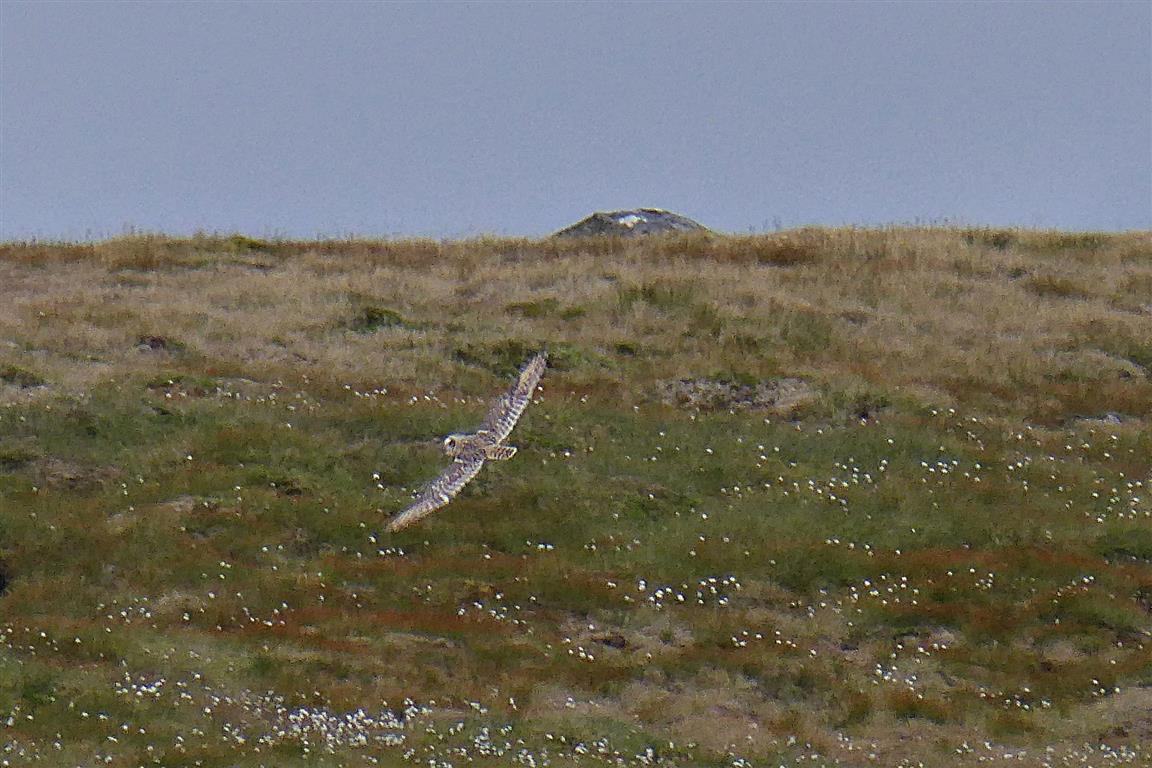 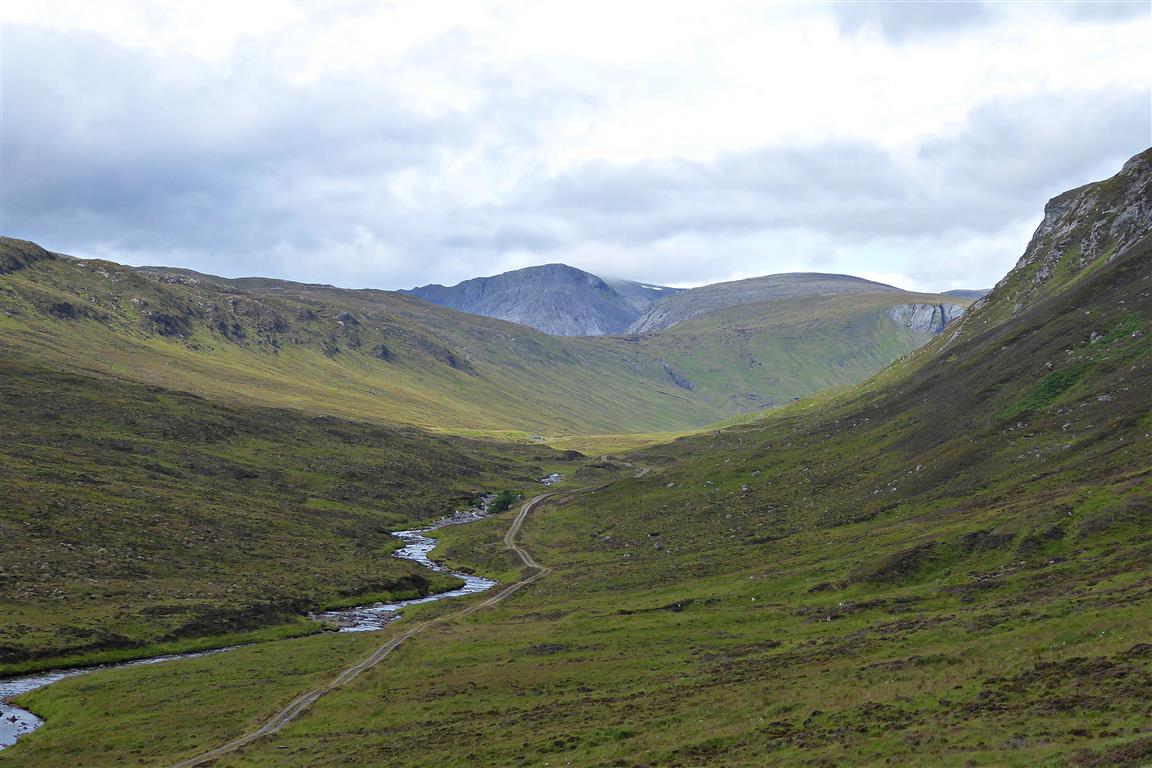 Got back to the bike then cycled over the bridge, past Meall a’ Chaorainn and southwards until the track started to dip downwards. 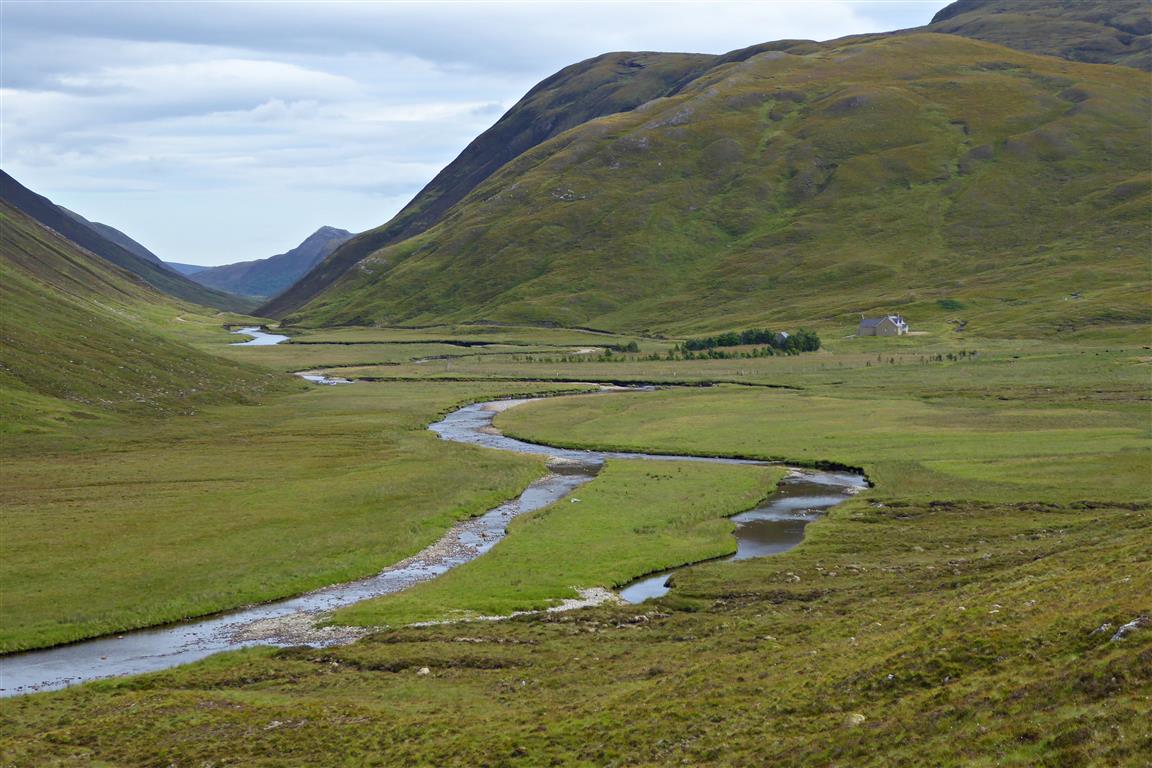 Locked up the bike and set off SE up the hillside towards Beinn a' Chaisteil. I was convinced I could see a path in the heather higher up but couldn’t find it. There did seem to be traces of tracks here and there but it was mostly just a case of heading up the open hillside through the heather.

Gorm Loch and Am Faochagach 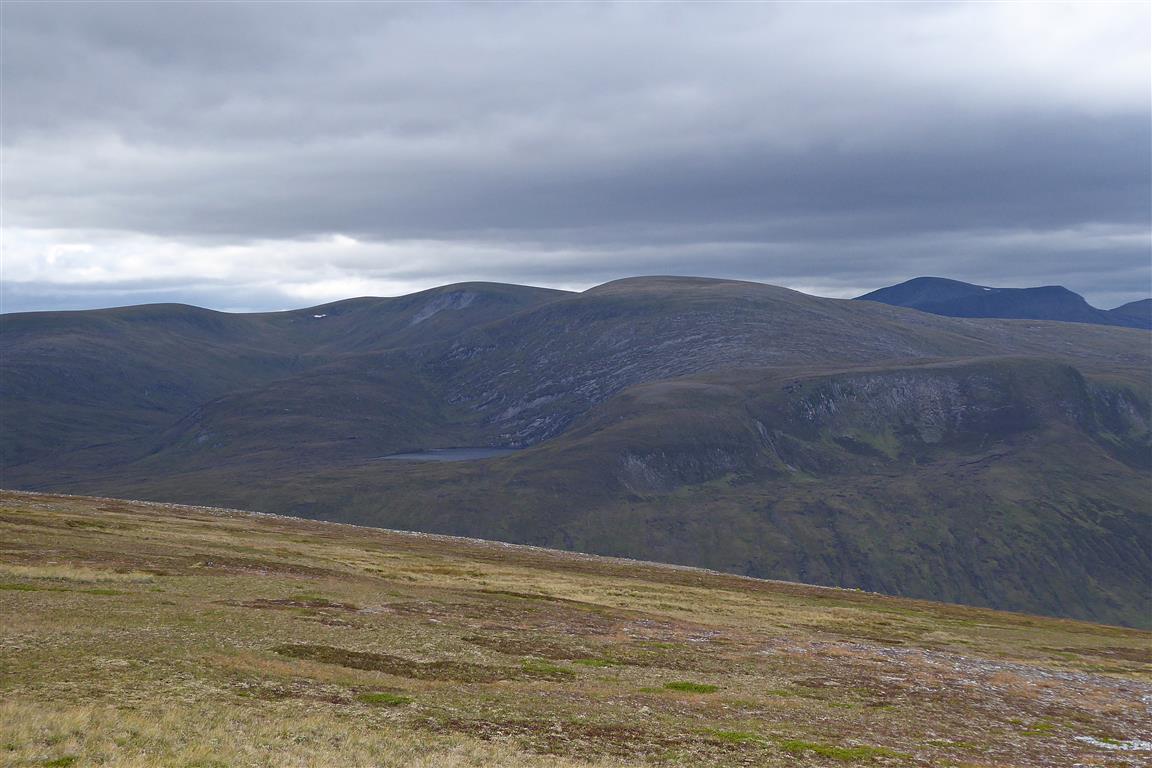 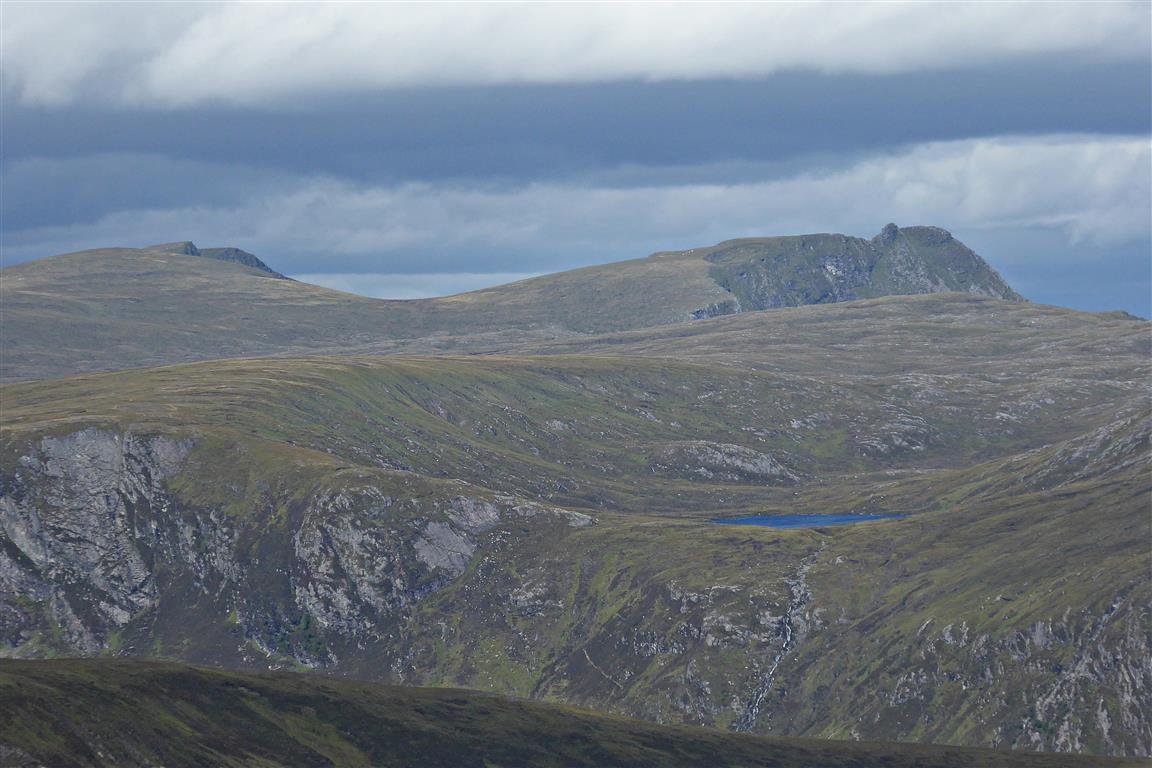 Got to the summit trig and shelter. Reasonable day now but looked like bad weather may be on the way. 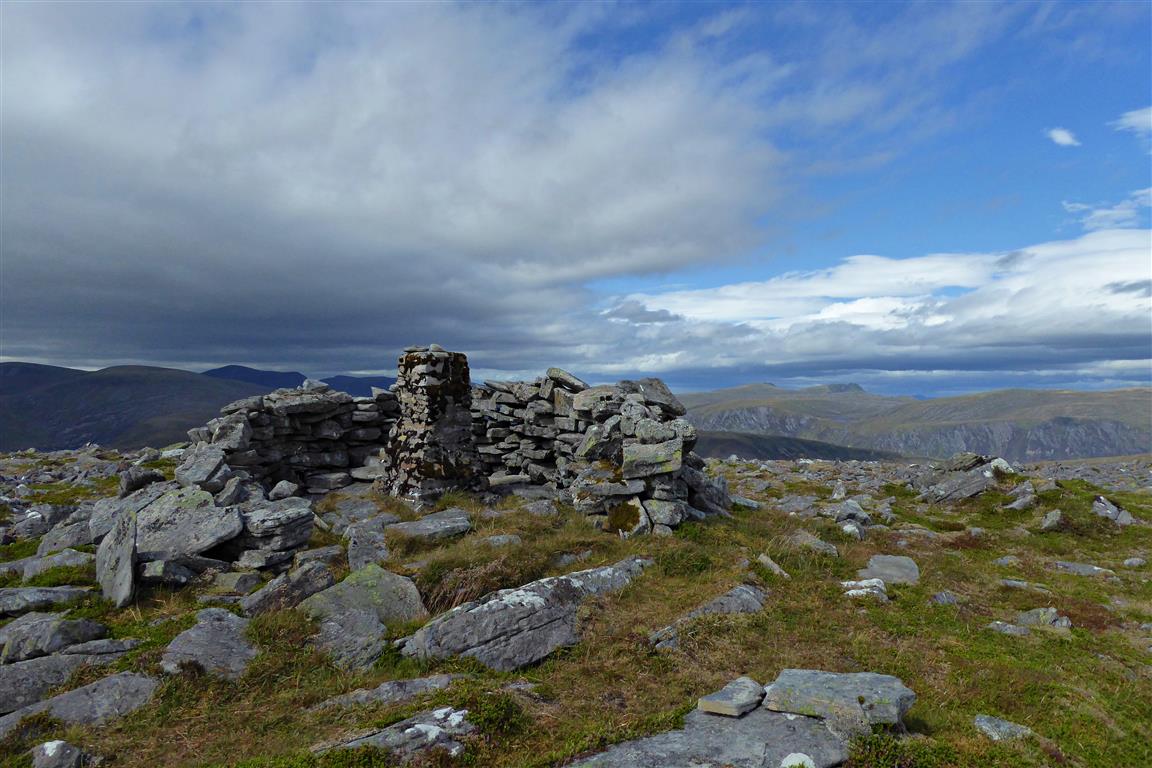 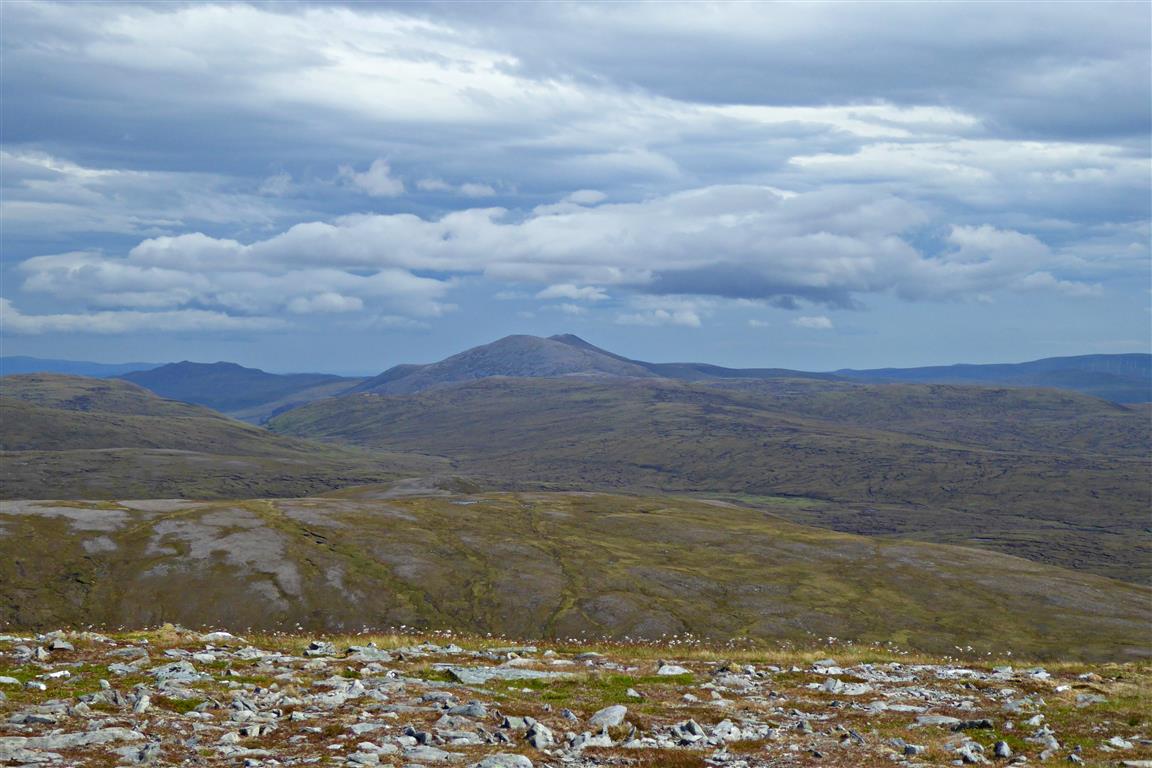 Had a break then headed back down to the bike and cycled towards Deanich Lodge. 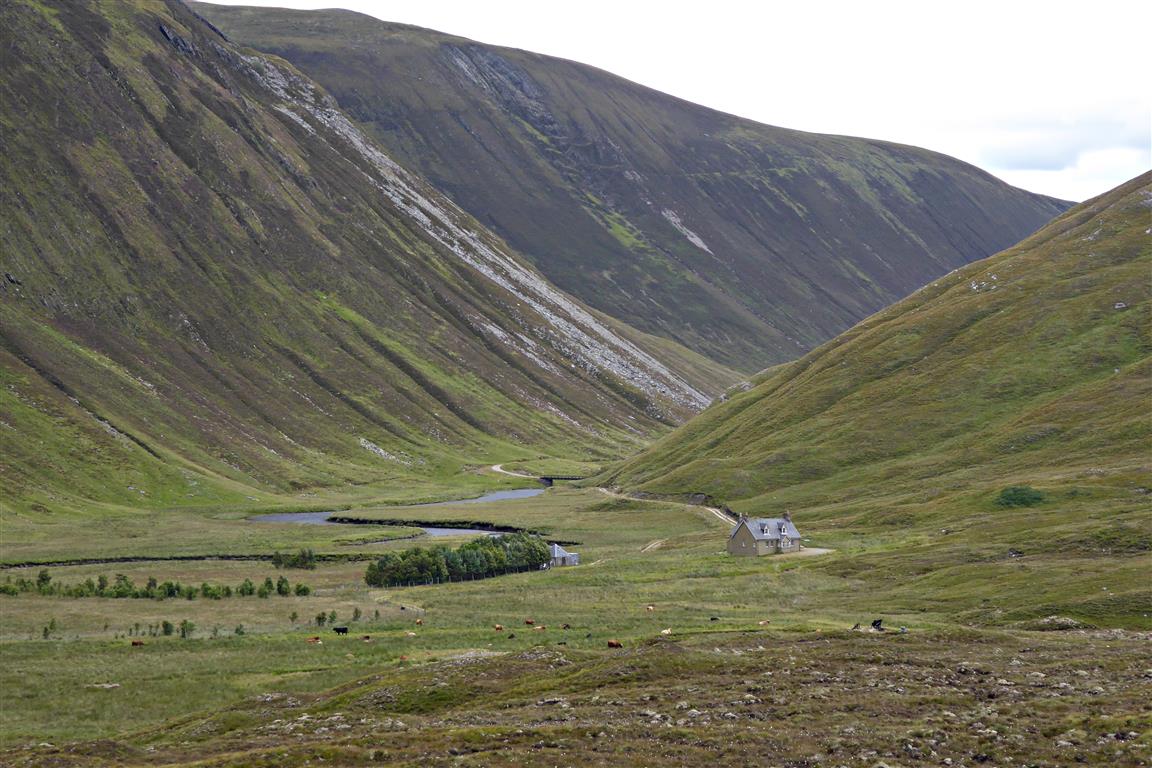 The simply a case of cycling back to the car. The return cycle was a lot quicker than the outward stretch being mostly downhill. The rain did eventually start about 3 km before the end but there was no pint in stopping for waterproofs and it didn’t last that long. Back to the car, packed up then drove back our holiday accommodation at Coylumbridge after a productive 1.5 days.

Oh no - the ISO error (or similar) is one of my nightmares at the moment!! I've been using the lockdown to get to grips with "Manual" so I can get better photos at sunrise/sunset/dark but the more I play around with settings the more worried I am about forgetting to change something back

You got away with it though

Looks lovely down there. I've had these 2 on my radar for later this summer when/if I get a bit of fitness back (but by a shorter route and one at a time!!) but doesn't look to be happening anytime soon sadly. Seana Braigh looks great from there

Nice trip - I quite fancy going up the length of Glen Mor sometime. Have only ever come in from Loch Vaich before. Photos don't look too bad, but it's annoying when something like that happens and you know they will never look the way they should have done!

Carn Ban looks like a mini Seana Bhraigh on the map and I remember admiring it from there. A pity we didn't get to see its northern corries. Great views from the other hill though.

Jaxter wrote:Oh no - the ISO error (or similar) is one of my nightmares at the moment!! I've been using the lockdown to get to grips with "Manual" so I can get better photos at sunrise/sunset/dark but the more I play around with settings the more worried I am about forgetting to change something back

Interestingly I got my first proper camera, a Pentax MX SLR, in 1982 on the recommendation of a photographer friend of my Dad; it was manual only, mechanical with only a battery for the exposure meter but even without it the camera was fully functional and it had a lever of the side of the lens mount to able to see the depth of field. I went through many rolls of 35mm slide film trying out different things and settings. Taught me all the basics and still have the camera and lenses but nowadays I take the easy way out with a digital compact - too many settings though

Glad to see that you're getting your fitness back gradually - although even not fully fit you still manage far more than most of us !

Looks like a fine way in by bike.....at the area of your approach for this way in I have touched when getting to the Corbett.
My way in, by bike, for these two hills was from the Black bridge. Fine images.

Interesting way of combining the two. We also used the Black Bridge approach for Carn Ban - all I remember from that trip is a swarm of midges following us all the way

After I read your Carn Chuinneag report I wondered if these were up next and how you would tackle them. Great pictures of the glens they look stunning. Wife and I did these two as singles, both on foot. We did Beinn a'Chaisteil from Black Bridge. We did Carn Ban from the north. Drove to just before Corriemulzie Lodge, walked to Magoo's bothy, Ditched our gear and went to the summit and back. Stayed overnight at the bothy. Sat outside to have dinner with Seana Bhraigh for company

Walked out the next morning. It was very relaxing way to do Carn Ban.

That is such a great part of the country

. I'm looking forward to exploring it a bit more when I get back up there. Your Corbett tally is fairly advanced!!