I was one away from 50, Moss was two away from 50. Ben Nevis is out of the question for Moss to catch up so for us both to reach the big 5-0 meant a double (and it may sound silly but I really wanted us to reach 50 on the same day!). Beinn A'Ghlo sounded ideal. Originally I planned to do the three, but reading a few other reports revealed another descent route that for whatever reason isn't marked in the OS map and just doing the two seemed the better option rather than having a very long day. The forecast on Sunday evening was for sunny spells, by morning it had changed to cloud but we decided to go regardless. There might be better weather forecast for the end of the week but the wind speeds were picking up too so today was the best option for reaching 50. It was slow going getting across to the A9 and up to Blair Atholl and when I got to the parking area there were only a few spaces left, but there was space and we set off, Carn Liath hiding in the cloud. Carn Liath in the cloud

We followed the track through the gate, I was a bit worried about the possibility of cattle in the field especially when the fence was electic, but today the cattle were elsewhere, and through another two gates spotting the hut peeking over the edge of the hill at the third and almost as soon as we were through that gate turning onto a grassy track that led passed the hut and into a boggy area. Here, though there was no one working there at the time, it is clear there is more path building going on creating a new path across the bog, but only a few sections have been done so far (and these few sections were appreciated!). Of course, the dogs had loads of fun in the mud and water... They found some wool to play with Now they decide to use the path!

As the path ascend we left the bog behind and reached the new, well-made path put in place to try and reduce the erosion scar up Carn Liath. There are a lot of steps that lead almost all the way up making the ascent easy, if very steep in places, the cloud lifting as we headed up. View on the way up 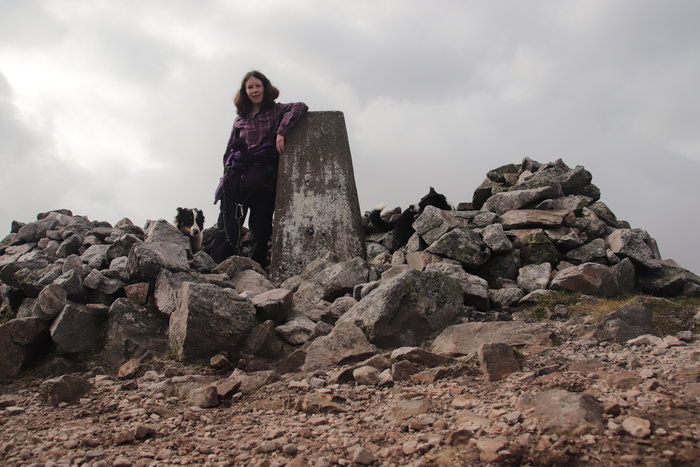 Unfortunately low cloud hid most of the views and we soon continued on, the path leading to out next target snaking across the ridge ahead. It was easy enough going and we descended to the bealach where our descent path was easy to spot, but first to the summit of the next Munro... It looked very steep from the ridge of Carn Liath, but the ascent wasn't too bad. Down below was a stream and Moss was looking at it. I figured she was needing a drink, but the stream was further away than she'd go on her own. Fortunately I'd brought water along...unfortunately I couldn't get the bottle open (the lid of the bottle is a scoop-style bowl). We kept heading up, I figured there might be someone around at the summit who could maybe open the bottle. As it was, as we were heading up I spotted a rock with just the right side grove and managed to get the lid open. I filled it with water, Zena drank a bit but Moss, who was wanting the water in the first place, had a whole two laps! All that effort for little more than a sip!

Continuing on, the summit was getting covered by cloud, then uncovered again. It was clear when we reached the summit of Braigh Coire Chruinn-bhalgain, but surrounding cloud hid most of the views. But never mind, Moss had bagged her 50th Munro! Zena had now got to 22, the same number my previous hill-dog Millie reached only while Millie had around 5 years between her first Munro and her 22nd, Zena had taken 10 months and all but one of those was done in the last 2 months! Moss (right) on her 50th Munro! Zena still has some catching up to do! Me and my girls

It started to drizzle and we started our descent back down to the bealach and the clear descent track that went between Carn Liath and Beinn Bheag. This was a nice way to descend, the path was mostly clear (though somehow we did lose it at one point) and well-made. There are a few boggy sections but nothing overly bad and the dogs of course were delighted to find mud and pools of water, which apparently is much better than the tap water in their bottle as Moss had a good drink (though not a massive drink, she isn't really a big drinker!). This is much better than the stuff from the tap...

While not on the OS, the path was marked on my Viewranger but on the ground there was a clearer path not on that either that crossed to the other side of the Allt Coire na Saobhaidh leading to a well-made path. So we followed that path. Another path sticks closer to Carn Liath cutting off a corner, crossing more boggy ground vs good path...good path won! Looking back the way we came, sun is starting to come out! On the good path

The rest was easy walking, firstly on the path then the track that led back to the car park. Of course, now the sun decided to come out and the Munro's behind looked stunning now they were bathed in sunlight! Oh well, maybe we'll get the full benefit of the views next time! Sunshine on the summits now Congratulations on your double 50

LoveWalking wrote:Congratulations on your double 50

Congratulations to you and Moss for reaching 50

. You choose a great hill for it. I plan to do Beinn a' Ghlo again at some point. Just loved that twisting ridge!

Silverhill wrote:Congratulations to you and Moss for reaching 50

. You choose a great hill for it. I plan to do Beinn a' Ghlo again at some point. Just loved that twisting ridge!

Unfortunately the weather wasn't the best for showing it in all it's glory, but there's always the next time

Well done. Great photos of the dogs as ever.

litljortindan wrote:Well done. Great photos of the dogs as ever.

The dogs loved the boggy bits!