Here we go it is time to tackle these two again. Both George and I looked through every walk report to see if there was an easy way to tackle these two big lumps, the bottom line - no there isn't. We opted to loosely follow bobble-hat-Kenny's route (thanks very much).
The usual arrangements were in place, meeting time and place with a special guest meeting up with us in Killin. Andy was up here for a week and bagged the Lochnagar five yesterday and would be sleeping in his car as he usually does. We haven't walked together since we were in Glencoe doing Bidean nam Bian 3 years ago.
We met up earlier than planned and then headed up the single track road to Kenknock and to the car park where the only other vehicle was a camper van.
As soon as the car door was open we were greeted by our friendly little biting friends, so it was a quick scramble through our kit to get our head nets on. After that we didn't hang around and were on our way within minutes, Andy being a tough guy opted to be welcoming to the Glen Lochay midge, however they didn't seem to bother him!

George and Parminder getting well prepared

Special guest appearance from the one and only

Bikes would have been useful, the way ahead

Hydro pipes not exactly blending in with the surroundings

Quite substantial pipes, not seen them in B&Q

One of the drawbacks if you do utilise 2 wheels is the gates, there are at least three to negotiate

This really was rather random - mobile bothy?

With a great view

Another of the gates, big decision who will go through first!

Plenty of the locals, but none higher up

Allt Bad Odhar with not much water in it

Now the fun begins, time to leave the luxury of the track and head uphill off piste up Sron Nan Eun

Looking back down Glen Lochay

Looking west, looks very remote, you would never guess this was Perthshire

Deer fence more visible, we were heading for the dip in the hillside

Luckily for us, no climbing of deer fence was required as it looks like previous walkers had somehow forced a hole in the fence

The fence has taken a bit of a hammering, not by us I hasten to add

Looking east to the massive lump of Beinn Heasgarnich

Glen Lochay from on high

Looking west towards Orchy and co

Andy waiting patiently for the pensioners, Creag Mhor in the background

Creag Mhor from a bit closer, still a bit of going up to tackle

George adopting his usual pose whilst admiring the view

Looking across to the massive lump of Heasgarnich

Not sure why this is here or what is signifies?

Arty shot with Loch Lyon in the background 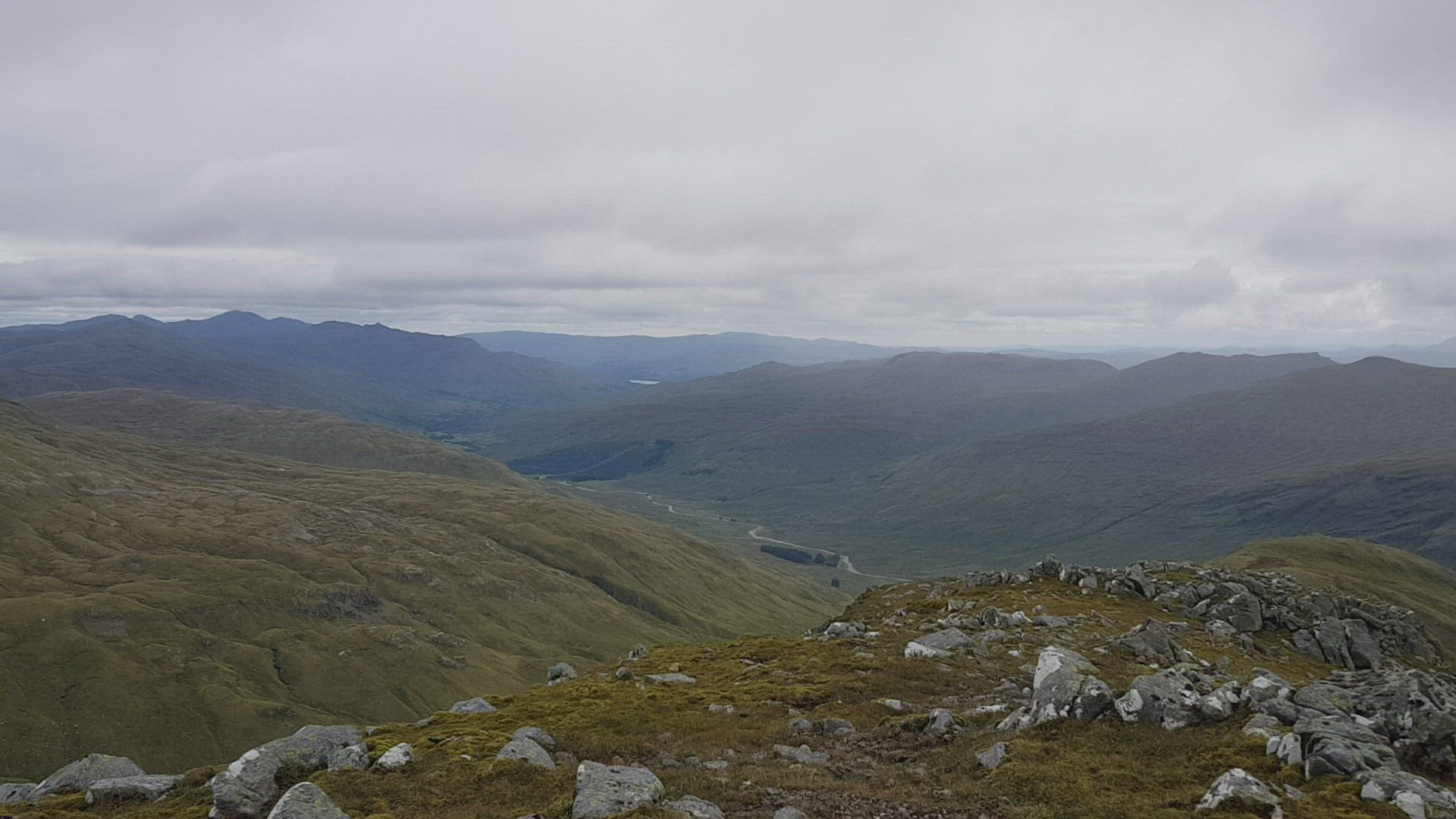 Video from the summit of Creag Mhor

Descending off Creag Mhor, looking back

Charging down to all the mush at the bottom, before the slog up the other side

Looking back up to Creag Mhor

There is no path, it is just a matter of trying to stay upright

The fun that lies ahead

Looking back to the descent off Creag Mhor, the key is to avoid the crags

One of the many pauses for breath on the ascent, not sure what Parminder is doing?

We had finally made the broad summit plateau/ridge of Beinn Heasgarnich, still a few more undulations to tackle

Summit shelter on Heasgarnich from the north

We wandered to the northern edge of the summit in the hope of seeing Loch Lyon, but the huge mass of Heasgarnich doesn't let you - unless you descend and I wasn't doing that.

Another section of Loch Lyon 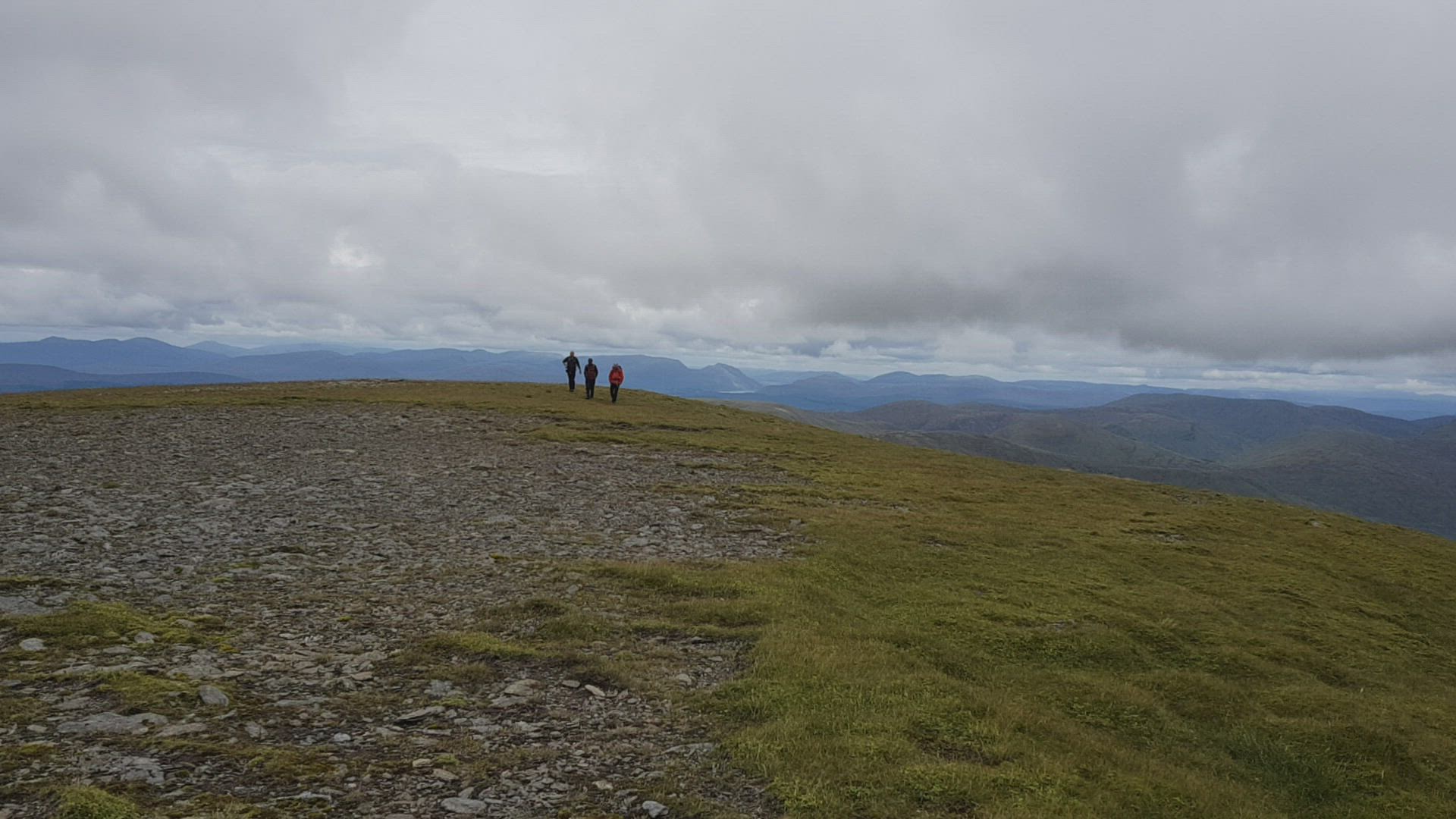 Video on the summit of Heasgarnich

The start of the long descent off Heasgarnich

The way ahead, pick your way through that - you can why these hills are magnets for walkers

Andy racing ahead - usually in the wrong direction

Confession time, I was the only one who failed to stay upright. Was attempting to multi task by checking my phone to see how we were doing on our route and failed miserably. I slipped on slimy wet grass and ended up on my back, my phone got a bit of a soaking but luckily that was all. The good news is that nobody caught the incident on their phone.

Very impressive, someone had too much time on their hands to reconstruct

From the other side

Still a bit of descending to go, but at least we can see the track now

Glen Lochay on the descent

Now for the tricky bit, there are a few crags to try and avoid

The final photo of the day - the River Lochay

This turned out to be a much better than expected return. I am sure these hills won't feature in many of the top ten hills in Perthshire, let alone Scotland. If anyone is thinking of tackling these two, I would recommend following our route - not to the tee, as both hills have plenty of crags that can catch you out.

Re: The dreaded return - turned out to be better than feared

Guys thanks for another BRAW dayout