Hadn't slept well in the hostel the night after Toll Creagach and Tom A'Choinich, perhaps still mulling over which hills to go for? Last night I'd finally opted for the Mullardoch one's as wind was forecast lowest there. It was only after rising that I realised I hadn't route notes or, maps for these hills. Quickly back to the drawing board - Glen Affric one's it was to be, though expect a windy day. 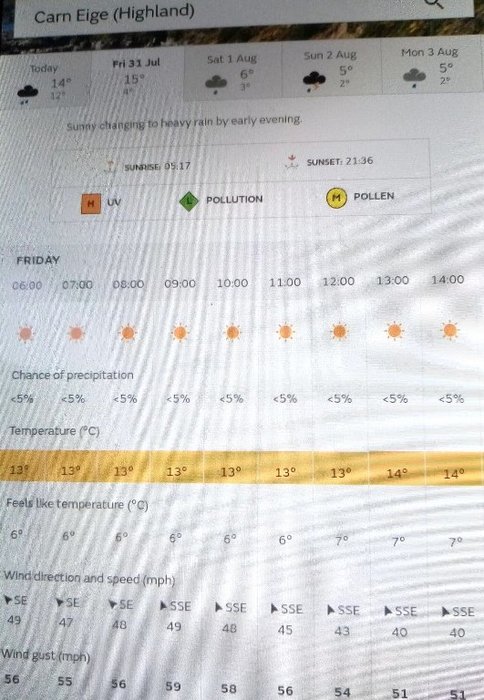 Hold on to your hat!

At least I knew the road a bit better after yesterday's visit and just opted to use the new car park again, though this did flummox me a bit initially, differing from the WH's notes, till the penny dropped, they were starting from different point.
The going was good till leaving the Landrover track. It was especially pleasing to view the hills which I had traversed yesterday, but hardly seen. Gleann nam Fiadh, or Glen Spongy, as I re-christened it the day before, was no less squidgy, sploshy and splashy, however and it was fair roasting, with hardly a breath of wind evident. 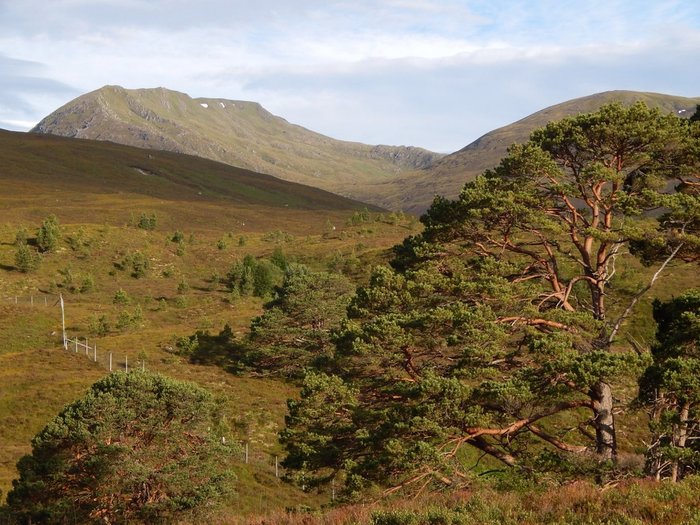 Tom A' Choinnich, how it should have looked yesterday :) 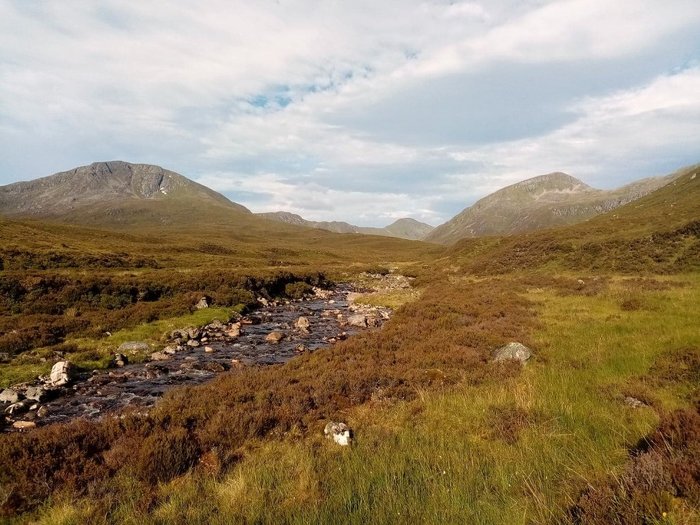 Part of the "horseshoe" ahead.

Although I could see the first target, Sron Garbh, from a long way off, it didn't seem to get any nearer very quickly and it struck me as a rather formidable height, too. Same with Sgurr na Lapaich, not so far away to my left. Just after a waterfall came the spot to head up to the right for the ridge and as per WH's notes, I soon lost the path, however the general route was quite obvious in these conditions. Tom A' Choinnich, with Sron Garbh, start point on ridge today, beyond. Sgurr na Lapaich from the glen. Not a Munro.

Like yesterday, the lead soon began to weigh heavily in the boots once the climbing started

Eventually reached the bealach between Sron Garbh and An Leth-chreag. The sudden view of Loch Mullardoch barely registered. The stiff increase in wind speed, however did. Perhaps, enlivened by the change in terrain, I enjoyed the climb up Sron Garbh much more than the previous few miles, especially seeing the ridge and hills ahead. Look back down Gleann nam Fiadh. A veritable bogfest :(

By now the wind was gusting, surely 50mph, or so. Enjoyed the walk along the ridge, despite being blown off balance now and again and again. One or two scrambly moments, but I avoided anything remotely risky. Just as I was making my way on to the summit of Carn Eige, saw the first signs of life summit Mam Sodhail. The views were good, but by now the sun had wilted into a hazy grey

Think I was about 4 hours in and felt just about done in. First look over to Lochan Uaine, below Mam Sodhail and Carn Eige, the two highest Munro's north of the Great Glen. Over to Mam Sodhail. Sgurr nan Ceathreamhnan beyond. Don't ask me how to pronounce either :) 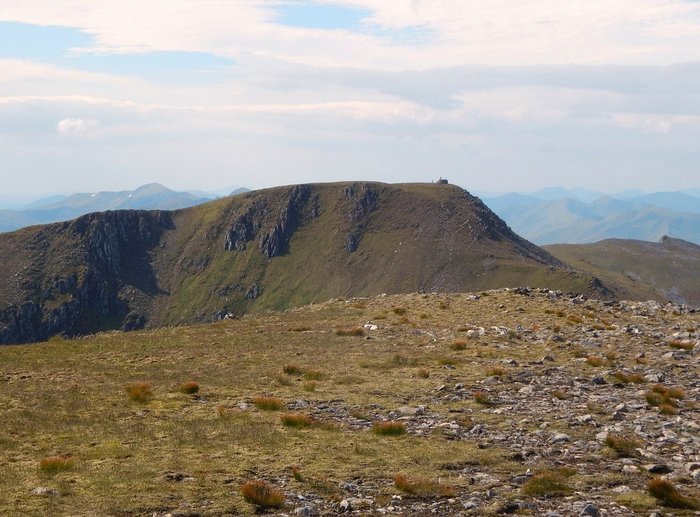 On Carn Eige, 1183m. Photo doesn't show winds which were gusting at 50mph+ Looking down on Coire Lochan and Loch Mullardoch.

Was having real reservations about whether to go for Beinn Fionnlaidh, which looked so diminutive from above. Who put that there? I think I was just kidding myself, because no way was I coming back out here to do just that one!

The descent off Carn Eige was a bit footery, a word many won't be familiar with

but, basically means annoying stones and rocks here and there. Opted to leave my rucksack near where the track deviates off for Mam Sodhail, on the return. Loch Mullardoch. Sgurr na Lapaich, (not same one as on this route) the most prominent.

Climb up Beinn Fhionnlaidh, wasn't too onerous, but always taking me away from where I wanted to go

Didn't hang around much, maybe having a munch, drink and photo or, two. Met a few others around the bealach again, perhaps one, or two doing the round of Mullardoch hills. Not for me Looking back to Carn Eige and Mam Sodhail.Fortunately, one can traverse across CE, rather than have to climb it again, or I might no' have made it back :)

Again, I lost the track traversing round the west side of Carn Eige, however even though the ground is a bit steep, was no problems in this vis and made it back on track at the bealach between Carn Eige and Mam Sodhail. The ascent doesn't look much viewed from Carn Eige, but by the time I made it up to the massive summit cairn, my legs knew that to be false. I wasn't remotely tempted to clamber inside, but enjoyed the views of the many surrounding hills, including Skye, Torridon and Ben Nevis. Was about six and three quarter hours, or so, to this point. From Mam Sodhail, to the first pair. The ridge in to Carn Eige. 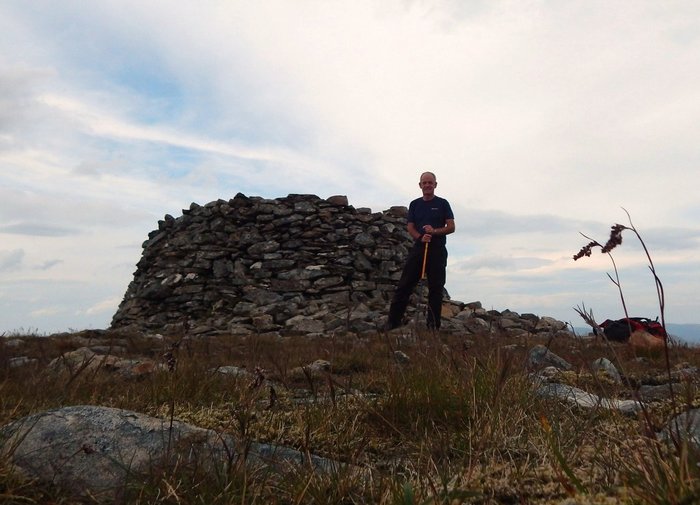 Summit cairn Mam Sodhail, 1151m. A fine work of art and the cairn isn't too bad, either :) Didn't quite enjoy seeing Sgurr na Lapaich look so far away, but the ridge walk looks more appealing and not too taxing. Indeed, it was very enjoyable ..... and lengthy

Quite a unique looking "scar" splits it down the centre. Another thing which struck me, is how it seemed to assume height the nearer I got! "Surely this must be a Munro," I said for the umpteenth time

Maybe one day it will assume that title again. I hope so. 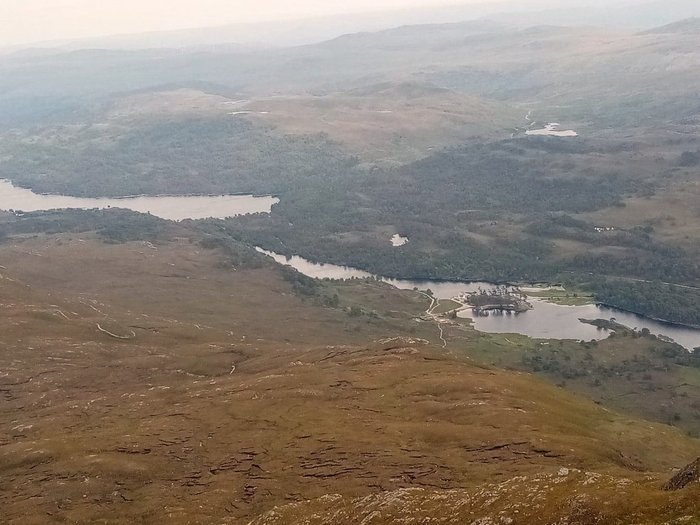 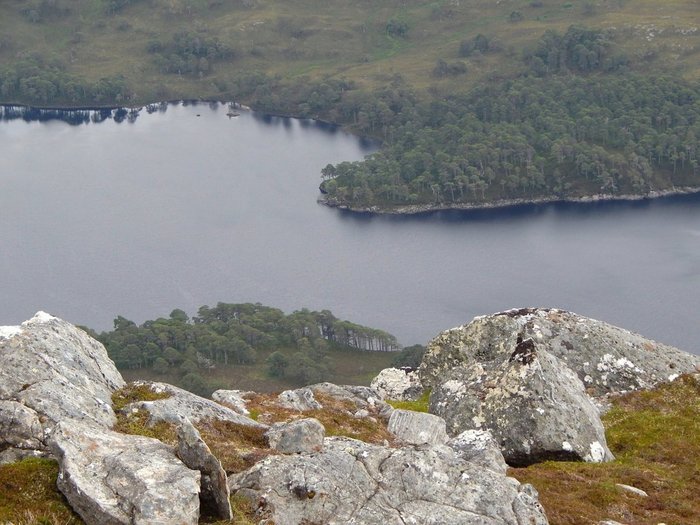 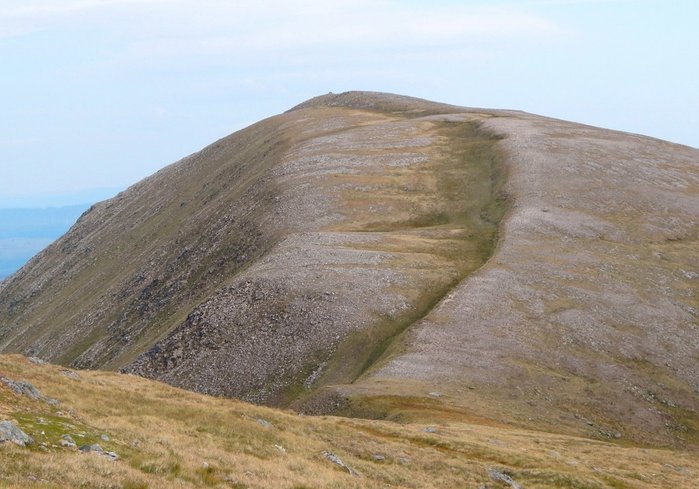 The oddly scarred slopes of Sgurr na Lapaich. Did I mention I think this should be Munro #283? :)

Anyway, it is a fairly steep, windy drop down, but I managed to keep on track fairly well this time, even crossing the moor, which I would think would be very tricky in poor vis, especially if doing the route in reverse? Anyway, I made it onto the track and enjoyed the majestic views of Loch Affric and Kintail hills. Wonderful! The trek back to the car felt like ages. It was good seeing folk out and about again, now that lockdown has been relaxed, though I wasn't so sure about the wisdom of the firestarters, in the current warm conditions. It would be awful if these beautiful forests were destroyed by a careless fire or bbq! 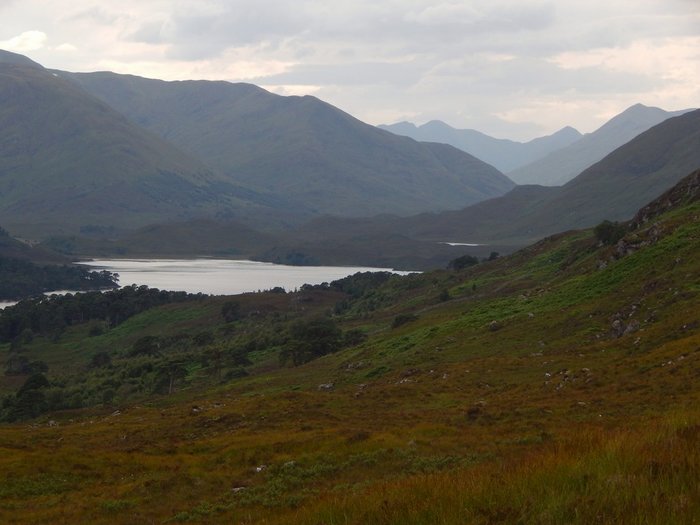 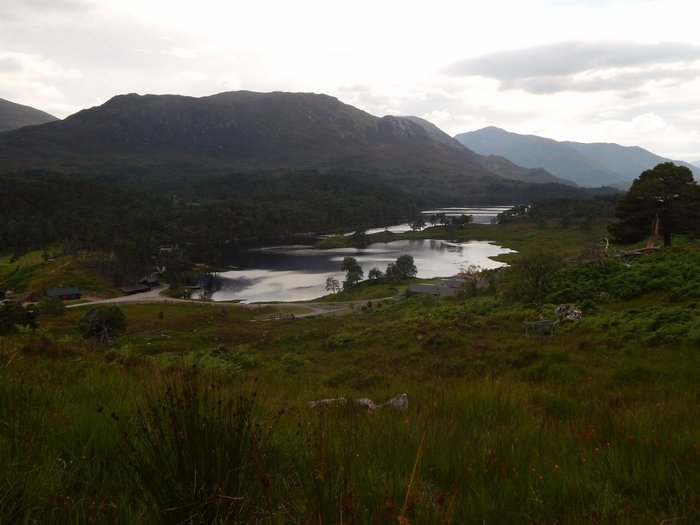 Anyway, made it back to the car in just under the ten hours and just in time for midgie feeding time

the "hard" I mean...something was wrong with my from the beginning and then I was spitting blood and shaking on the summit of Cairn Eige thought I will end up there felt like seeing my last Munro...but then I was feeling sorry to my son imagining him to carry me from there...so far

...so somehow I managed to move and started the endless way back, well still over the Sodhail summit, but missed the other Munro no.3...angry, because of too close and who would go there all the way again for the one

but the time I was just thinking to survive and not let my son in trouble..
It was hard to go over Sodhail feeling dizzy and close to colapse, but my engine giving me at least some power was thinking of my daughter Cheyenne and my wife waiting us at home...and I really wanted to see them again ! Also remembered the part of the movie Everest, where the climber was thinking of his family and managed to get back to the camp...I really fon't know what happened to me that day, but it was 13.4. and we have always some bad experiences with the date in our family

When struggling up to the Sodhail and almost saying good bye in this World I found this stone/ rocky Heart !

I never mentioned this in my report and did not want to scare my family, but definitely I will never forget this trio - in my case duo ! A big walk in such windy conditions.

Aye, between wind, sun, bogs and my poor wee legs it proved a tough day

Thank you, Petr. That must have been an awful day for you. Worries on different fronts. Fortunately, I have never been too unwell on a day out, apart from a wee hangover, or touch of the runs now and again and that is bad enough

I know how you feel about keeping some things to yourself

Keep up the good work.
Jimmy

Aye, between wind, sun, bogs and my poor wee legs it proved a tough day

Thank you, Petr. That must have been an awful day for you. Worries on different fronts. Fortunately, I have never been too unwell on a day out, apart from a wee hangover, or touch of the runs now and again and that is bad enough

I know how you feel about keeping some things to yourself

Keep up the good work.
Jimmy

Fortunately nothing like that happened to me in the hills again since...
All the Best and stay safe, especially if you are on your solo trips like I mostly do...
Petr