Across the moors to the Armine Forest

Across the moors to the Armine Forest


We parked the van the night before at the end of the track at Badanloch, so we could have an early start. The forecast was for sun and fairly strong winds. We enjoyed the cycle in along a well-made estate track. 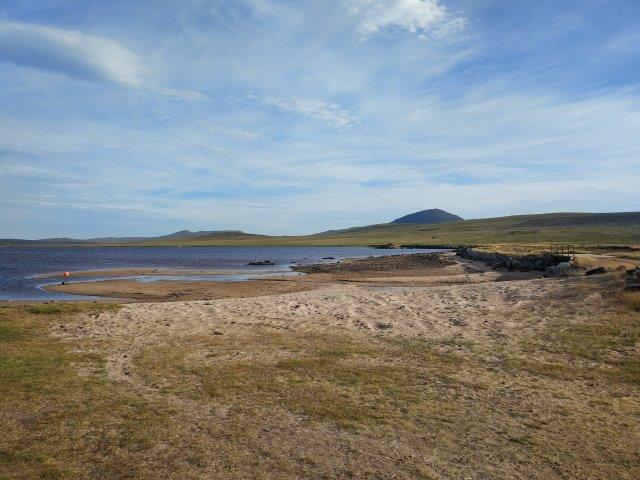 Beach near the start of the day 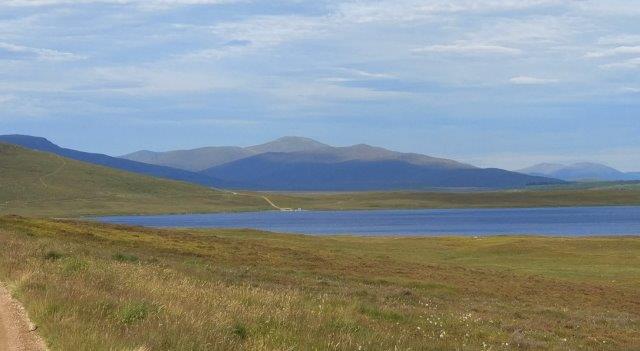 Our hills look a long way away!

We made good time according to the SMC guide (cos I don't think they take track quality into account) and left the bikes at the start of the stalkers track. I had been having trouble with the tension on the click button on my poles, so had been inspired to press it in with the end of my pole rather than getting my finger trapped. Here, at the start of a long days walk, I found that the day before I had managed to push the little button so far in that it had disappeared. Luckily the Hare had his bike repair kit, and he pushed a little loop of wire into the gap, this worked well for the next 3 weeks of our northern trip. 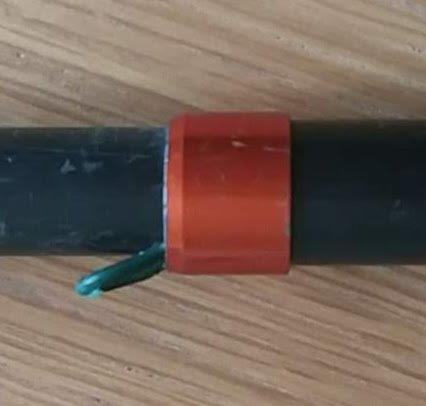 The wind had been quite strong even when cycling, so we decided to walk in to Creag Mhor along the track and have the wind behind us on the ridge. The track was good but the headwind made it hard work. Soon after the track forked, we huddled into a slight depression for a bite too eat, then continued. 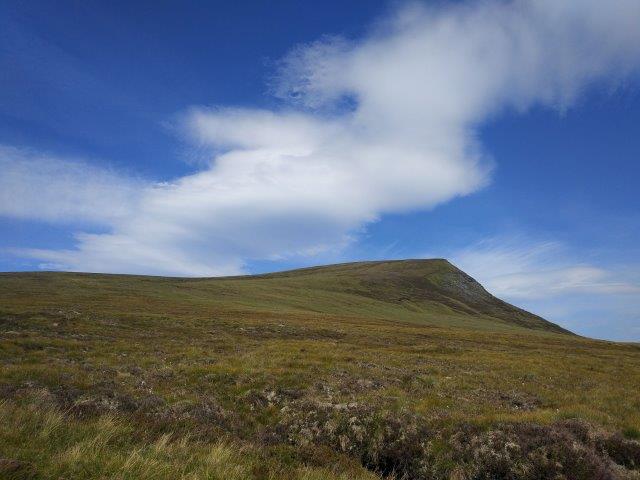 Luckily we were sheltered from the wind as we picked out way through the peat hags and up the grassy slopes to the top. Another advantage of going this way round, was that we could have lunch at the top, cowering behind the only sizeable summit cairn in the area. There were good views of Klibreck, out across the moorland to Morven, and a bit of Ben Loyal.
Then down, back through the hags, and a quite straightforward walk up to Ben Armine. This turned out to be a good direction to walk in, as we were walking with nearby hills to look at. To the south, the distant hills were too hazy to appreciate. I enjoyed walking along a broad ridge with short vegetation, but this didn't last long.

We dropped out of the wind and had a fortifying snack looking across at a very daunting set of hags on the side of Meall nan Aighean. However, the view was fore-shortened and the hags easily avoided or crossed. We arrived at another short-cropped stony summit area. The Hare went on to check out Creag n'Iolaire (slightly better views if you have time) whilst I headed back to the bikes, flushing out a ptarmigan early on. I might have been better going down the ridge but ended up heading more directly to the bikes, this meant going down a section of rather steep heathery ground. Here I almost stepped onto a large stag! It was so close that I thought that must have died recently, but then it got up and bounded away. The wind had been easing off throughout the day, and once back at the bikes, the midges quickly found us, so no long break, we cycled back to the van.
It had been an excellent day, with wide open views over moors with intermittent hills sticking up - this was scenery we have not visited for a long time. However, there was an inconvenient end to the day. Midges were getting into the van and even when we thought we had stopped them, it was rather hot trying to sleep with no windows open and no flesh exposed to our remaining insect visitors. Then, at 1:30a.m. the moronic local sheep, who earlier had been strangely and sadly walking up and down the road rather than getting on with feeding, started to bump into the van and scratch themselves, making it rock significantly. We ended up driving 5 mins up the road to a sheep-free zone. The drive had cooled us off, so then we slept.