I'd practised saying the name of this hill, Carn a'Choin Deirg, before phoning up and checking access in the stalking season. However, everyone we met on the Reserve just called it 'The Trigpoint'. We cycled from the Alladale car park, up the track which was good as far as the Gleann Mhor junction, then it went uphill and was sometimes a bit too steep and stony for me, followed by a descent that I wasn't looking forward to on the return. We met a ranger who was going to take some clients up Carn Ban - too easy, being driven along the tracks! He warned us that it was going to rain in the afternoon - we thought so too, but were hoping to be on the way out by then. We parked the bikes just after the first cottage, crossed the bridge and soon after, started walking across the moorland. Immediately another person drove past, stopped and asked if he could give us some advice - which was that there was an argocat trail just behind the hydro hut, and following that would avoid us breaking a leg in holes higher up. So we went back and followed it, and it led us through much of the tussocky ground. Then up some very soft mossy ground - hard going - to Carn Alladale. From Carn Alladale, down valley, with Carn Chuinneag

After that it was easier walking over grass along the ridge. We veered off the ridge to a gate in the deer fence but had to climb it - there was a padlock and a notice telling you the code, but it didn't work, either rusted up or altered. After a straightforward, windy but enjoyable ridge walk, we passed a small lochan and went up the final slope to the summit. This was our third hill from Alladale this week, and good that we had left it til last, since on our previous days we had got very excited about little glimpses of the Assynt hills, whereas now they were all lined up for us. Very dramatic as they were black under the clouds, but the sky behind them was still quite bright. 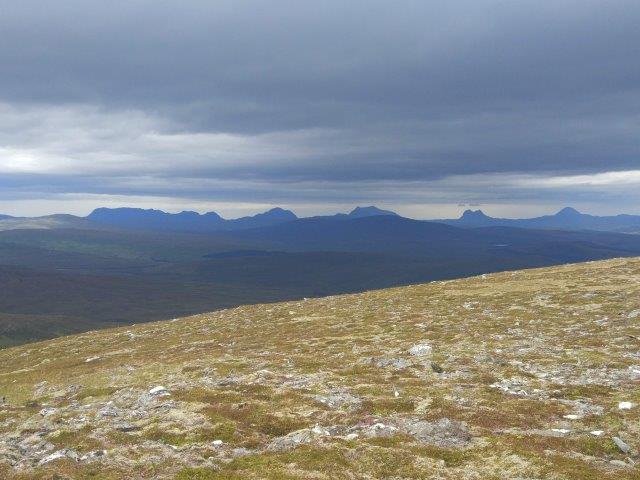 Back to the Dornoch Firth We dropped out of the wind and had lunch, before returning to the lochan and then descending to the long track in the glen - which extends further than is shown on the map. We had occasional rain thereafter, but nothing too serious. After a while, we spotted distant roofs of the holiday cottages, but for a long time they didn't seem to get any bigger! Finally back to the bikes, and after only a bit of walking to get back up through the woods, it was a good descent back to the car, on the way we met yet another 'local' asking us where we had been - this was the landowner Paul Lister who gave us more information about the European Nature Trust https://theeuropeannaturetrust.com/ which protects various wild areas in Europe, including the Alladale reserve.
Here is our approximate route.

Hi!
How did you get your bikes past the locked Alladale estate gate? Would I be able to get my e-bike through?
Malcolm

m3doc wrote:Hi!
How did you get your bikes past the locked Alladale estate gate? Would I be able to get my e-bike through?
Malcolm

We didn't meet any locked gates on the cycle section, just one on the hill. An ebike would be great for the ride in and out. Enjoy your day!