My last Munro experience was on Sgurr nan Gillean in September - almost a full year and in that time, I had started a dream job, Martha had started school and a pandemic was in full flow. What a year of highs and lows. A rollercoaster of every emotion was in there - happiness, fear, trepidation, pride, anxiety, profound love - and all that before we got to bloody Covid-19. The pandemic coincided with what can only be described as dream weather. But it was a nightmare not being able to get to the hills. All this was changing and the weather gods had aligned to give me a great opportunity at overcoming my Skye fears of the Cuillins. Since Sgurr nan Gillean, I had promised my wife I'd hire a guide for the last few tricky ones. I had used Jonah Jones back in 2012 for the Inn Pinn and I was impressed by his no-nonsense approach - he got the job done and inspired confidence. So it was I agreed to meet with Jonah (postponed from March) on August 14th 2020 to combine Sgurr a Mhadaidh to Banachdich. I had left Kylesku at 0330 and it was a long drive to Skye, with many deer on the roads and tiredness as my companion. I got to Glen Brittle for 0800 and not long after Jonah arrived. He got out of his car and abruptly announced "So, Sgurr Mhic Choinnich & Sgurr Alasdair!" - this wasn't in the script. I reminded him of my intended route but he just said that as this was a good day, we'd crack these two instead. I wasn't going to argue with him! But neither did I think I'd have the head for this, if I could scarcely handle Sgurr nan Gillean. Munro no. 262 and possibly one of my most memorable - or was it Munro 261? We down climbed after a cuppa, cooled off and then began the descent down the Giant Stone Chute - it looked steep but we got down in quick time and took a breather and soaked our heads in the loch. From here, it was an easy and hot descent back to the cars. What a superb day - not sure it can be beaten, Huge thanks to, in my opinion, the best guide in Skye.

Now that is a view - even more impressive now that I am looking at it on a big screen at work rather than a little cracked phone screen. Some very true words as well - the hills do indeed teach us what we are, which is fleeting, small and wholly insignificant in comparison. Great work buddy!

Wow, fantastic, what a day to be up there!

Out of interest, did the guide take you over Sgurr Thearlaich or did you skirt round it?

Good question; we went over as it’s a Top. I found this the most airy situation!

kevsbald wrote:Good question; we went over as it’s a Top. I found this the most airy situation!

Great, thanks, that's handy to know! I have not (yet) done the link between Mhic Choinnich and Alasdair.

Easy to see why you might view this as probably your best views day!

Awe inspiring photos. And a very honest account of what it felt like to be doing those fantastic hills. I never wanted to repeat them as they were at the edge of my capabilities.

We joined up with Mike Lates and having been rained off twice just asked him to phone us when he had a client for the Inn Pin. He did, and husband completed on it. Then Mike said his other client . Pete, wanted to do Sgurr McCoinich as well, what about it? Did that, and then Collie's ledge and over Sgurr ?Tearlich to Sgurr Alasdair, none of which I was expecting, but having been told there wasn't an easier way, was just glad to do it. This is Collie's ledge converted from a print with the Inn Pin in the background, still don't know how we did it. 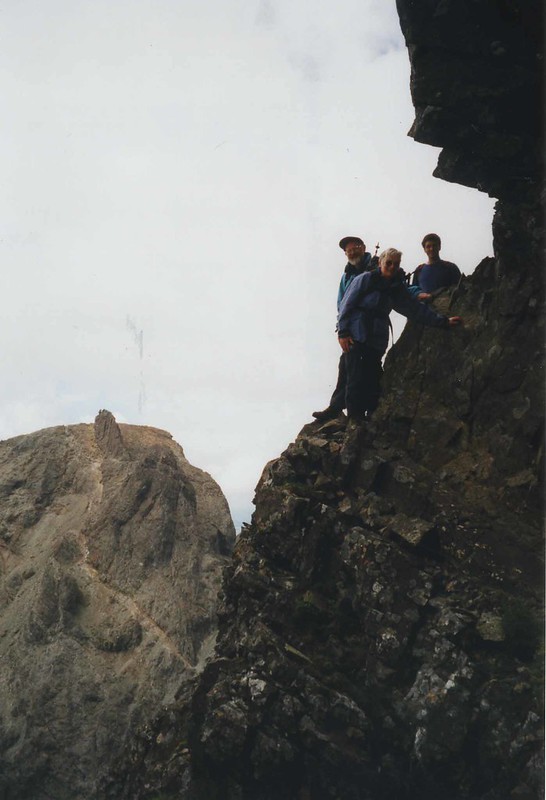 Nice report kev and a real bonus getting the inversion. Am sure you'll enjoy a'Mhadaidh, a'Ghreadaidh and na Banachdich when you get to them - cheers

Sgurr, thanks for the old photo. Really captures it. There were points I wanted to take photos like Collie’s Ledge and start of descent of Great Stone Chute but I felt concentration on situation was more important.

Fantastic day out - inversion is always a bonus