More lovely weather. Having had a couple of low-level explorations because of tiredness, heat, humidity and lack of breeze (yes, this is the north of Scotland in August), this day promised to have more wind. We chose this walk because of the gentle approach, paths and promised scenery. In recent years this hill has featured in several magazine articles so we knew that the boulder table on the summit was something special. We followed the standard approach, using stalkers paths to get above the corrie. Views of Slioch behind us We stopped by the tear-drop shaped lochan for a bite to eat. Then we had to traverse quite rough ground with rocks, heather and grass. Mostly we managed to pick faint deer trods through it, finally arriving on the summit area but the cairn was still a way away. We haven't seen many other people on our Graham bagging holiday, but this hill was too popular to have to ourselves. We had followed, at some distance, another couple who were lunching on the summit when we arrived. We chose a place a bit away from them to eat our lunch part 2. There were absolutely stunning views across to Beinn Eighe, in particular into Coire Mhic Fearchar. Many other Torridon hills were laid out in front of us, and views behind to Fisherfield. Once the other couple had departed, we wandered around taking pictures of the amazing sandstone pavement littered with boulders, and the nearby hills. 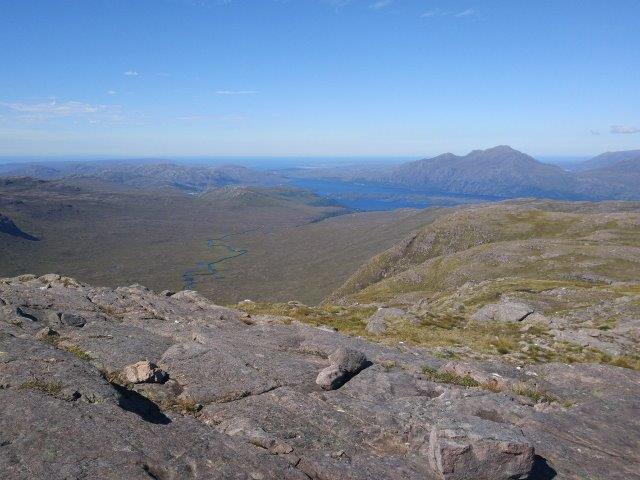 Then we descended much the same way. A superb day out and a relatively easy route.
Here is our approximate route

Nice! A great wee hill: a unique summit and terrific views. We did it again recently, which was lovely.

We were up this one twice, never had such good weather

The view into Corrie Mhic Fearchair is something special!