Two days after toiling up Tinto on a breathless afternoon, I was again driving through Biggar, this time planning to tackle Culter Fell, which turned out to be a big improvement on its near-neighbour.

The best and worst thing about being in the early stages of a hill-walking adventure is the sheer number of options open to you, so I'd spent ages looking at maps and reports before reckoning Culter Fell would be a good target, probably with Chapelgill Hill as an add-on. Then I had to decide on a start from the north at Culter Allers or the south-east at Glenkirk, finally opting for the easier drive to the first.

Parking up near the end of the public road, I was glad the thunderstorms over Lothian and the Borders had cleared the air and I made my way up the glen in warm sunshine taking a turn to the left by a stand of trees where a track starts the climb up Culter Fell. 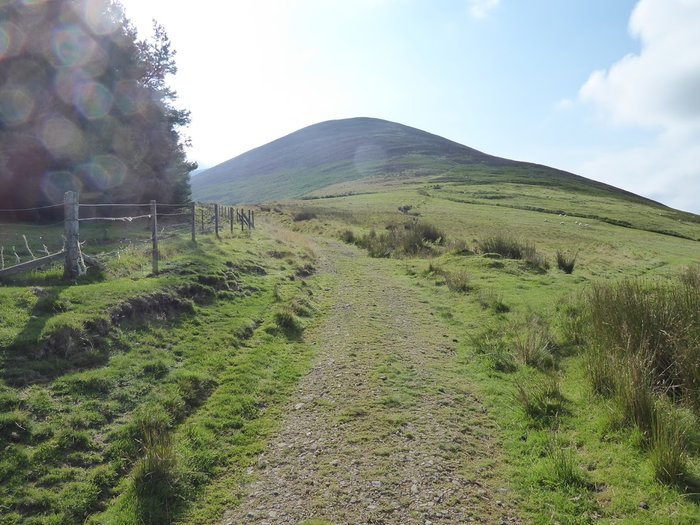 The way forward is clear as Fell Shin comes into view

The track heads up alongside a burn, so it was time to turn off and head over to the line of grouse butts where a path took me uphill. It's steep, but pretty easy going (and far more pleasant than the track up Tinto) so I gained height quickly, soon arriving at a cairn which commanded excellent views. The view back from the lower slopes of Fell Shin. Zoomed to Tinto, which was covered in cloud most of the day The walk levels out towards the top of Culter Fell

Just over an hour and 20 minutes after leaving the car, I reached the trig at the top of Culter Fell, unfortunately now covered in cloud. Dawdling over tea and a biscuit, I briefly considered changing my plan and heading to Gathersnow Hill and completing the circuit round Coomb Hill, Hillshaw Head, Coomb Dod, but in the end stuck with my original plan.

I headed down steeply, following the fence towards the peat hags on Glenharvie Moss, crossing the fence and taking a small diversion, losing some height to follow an ATV track around the boggy ground. Chapelgill Hill was covered in cloud for most of the day, although it looked fine, covered in purple heather. I made my way slowly up to the top, pausing for tea at the cairn a few yards from the actual, unmarked summit. Probably the best view of Chapelgill Hill throughout the day Cairn on Chapelgill Hill, looking towards the actual summit

I doubled back and then found a good spot to cross the fence and follow a rough path to Birnie's Bowrock, intending to climb the Donald Top Cardon Hill, but it was completely covered in cloud so I invoked the little-known SMC rule "if you can't see it you can't bag it" and turned round. I'll visit Cardon Hill if I get anywhere near to "compleating" the Donalds. Cardon Hill is in there somewhere - and it can wait for another day.

I made my way back to Glenharvie Moss and it was reasonably easy to cut across the peat hags to pick up a track heading towards Tippet Knowe. After about half-a-mile of descent, the track carries on along the ridge, but I took a path down Juniper Knowe which brought me out on the road near the foot of Fell Shin and a short distance from the car. Juniper Knowe, heading back to the road 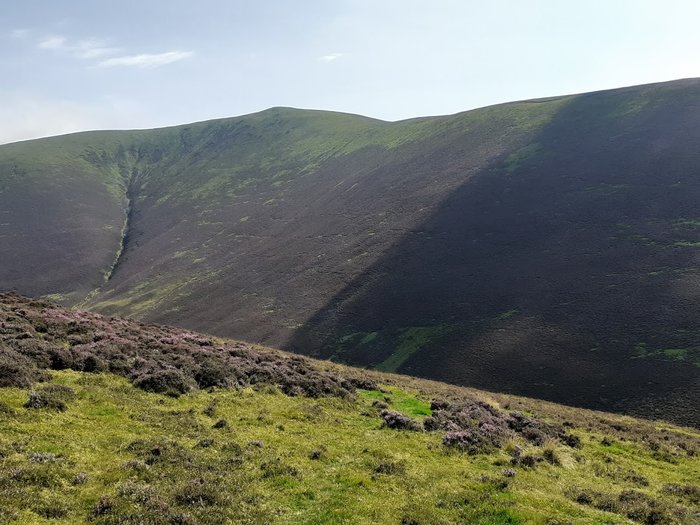