After a good bit of recent local wandering, I'd realised that there were only two of the seven hills of Edinburgh that I hadn't climbed in lockdown (as far as you can get, anyway), so yesterday I set off for the two further east.

Very much the city hill, my first objective was already in view as I crossed the Meadows - as it is from my office window, when I have such a thing. 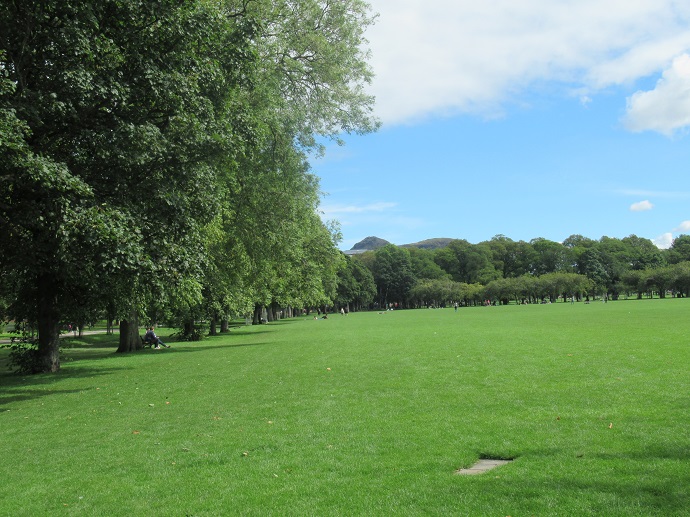 I'm not sure I ever manage to find the same way into Holyrood Park, but I definitely didn't find my most usual route this time - instead I found myself eventually by Pollock on the main road in. It was all about as busy as I'd expected, but that's fair enough. I do have a usual way up the hill, the one that goes up the middle, although with occasional variations - I kept to the steps this time, but two people seemed to have got stuck in a kind of rocky groove that I think I did make it up aged about 15, and didn't think much of then. This little path wasn't actually all that busy, so everyone must have gone off somewhere else, or just stayed at the bottom. It's a while since I actually climbed Arthur's Seat - the last few times I've wandered over I've gone up to the top of Salisbury Crags instead, which I prefer and everyone else doesn't. I had a good view over to the Crags now, where some kind of race was going on. Racers on the crags

I was already high enough that the city seemed a long below - on this side it seems to come apart in patches, with some open ground before the Pentlands seen end on, only East Cairn Hill sticking out from behind. Having got as high as it wants to go for the moment the path keeps curling round the hill, and so the focus of the view keeps changing, working round to a view out along the coast. The path comes out on the lowest of the three tops, and I visited each of them - the middle top is probably the best, with the good sea view and no crowds. The top really didn't look particularly appealing - it's not quite as bad as it looks, as there's a good bit more depth to the summit than is obviously looking over at it, and it had got slightly quieter by the time I made it up. This true top is more worn rock than grass, unlike the others - there are paths, but the quietest and often the easiest ways were straight up between them. I didn't really pause at the top, just dodged everyone I could and kept going in the same kind of way, dropping down the in between places instead of fighting for a place on the path. Once the path eased off and the ground opened out a bit it was very pretty, with the heather in bloom. 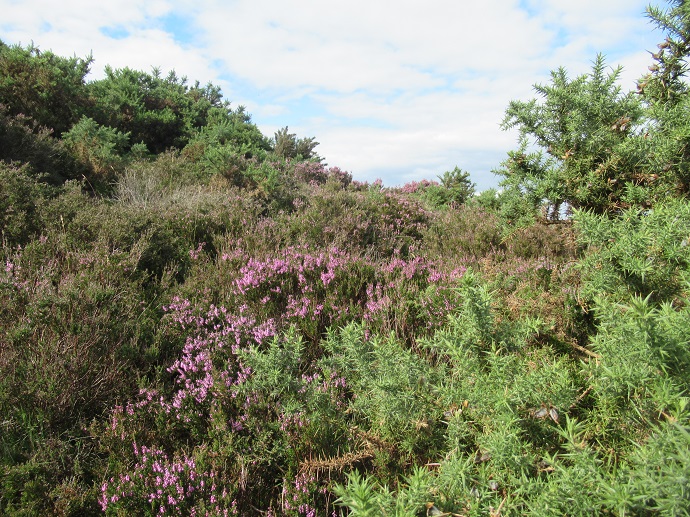 The path now curved round the head of a real little valley, and then there was a stretch of surprisingly wet grass before the descent again to St Margaret's Loch with the ruined chapel perched above. I don't often come right down this side instead of heading back to the south, but I was going on north, and my next objective was in view. I made my way out to the Royal Mile, and up through Lochend Close. This leads to a little flight of steps between Calton Road and the path which slants up in both directions - it felt like a fair bit of the climbing was done here. I came out on Regent Road and went along to the usual steps. There's a trig point over to the north of Calton Hill which is obviously a good bit lower than most of the summit area, but the true high point seems to be tucked round the back of Nelson's monument. I've been up to the top of the monument before, too, but it's obviously a manmade high point! This is a well decorated hill - the whole observatory complex, and the folly. Despite the short climb from Regent Road, the view south is very much over to Arthur's Seat, with the buildings tucked into the valley down below. Looking back to Arthur's Seat

Re: Last of the seven hills

I've only done the straight up and down when Arthur's seat was the only hill you were allowed to climb in foot and mouth. Your race seems to be "How many loops of a circuit can you do in 24 hours". EXHAUSTING