g54.gpx Open full screen  NB: Walkhighlands is not responsible for the accuracy of gpx files in users posts
Sun is shinin' in the sky
There ain't a cloud in sight
It's stopped rainin'.........

So the weather forecast promised and as it turned out to be when I opened the curtains. After yesterday's epic I really should have had a rest day but with today promised as the best weather for the rest of the week, what could I do? I didn't fancy the thought of soft snow-bashing however. On Sunday when me and Mark had our day off, we took a drive to Skye. Clouds were on the tops but we did see a bit. We went to Sligachan. Must say I was underwhelmed by the place. I suppose I've read too many accounts of climbers there in the 30's, somehow I was expecting the location to be a bit more remote, with the grand old bridge and Inn. Wasn't expecting it to be on the main road and the newer bridge. Probably what sealed it though is that the Inn is closed for the winter - renovations. So not the meal and drink that we'd planned, disaster!

We did motor over to Elgol though, a great drive on a single track road and a superb view up Loch Scavaig. Best of all is the way Bla Bheinn hits you with its magnificence when it suddenly comes into view heading toward Torrin. So, for today it was back to Skye for me - less risk of Cluanie-type cloud I thought plus a shorter expedition distance-wise. I was later setting off than I'd have liked because I had no map so got one from the outdoor shop in Dornie. Headed out to Skye, there'd been a sharp frost overnight and the roads leading into Broadford were quite icy. Gritters were out though and the strong sun was doing its work. On our visit on the 13th, Bla Bheinn looked like this. On the Elgol road, as I came to little Loch Cill Chriosd, I was greeted by this though. I hadn't expected that there'd be this much snow, what a bonus! There's so many good places to see and photograph this mountain as you approach, I made quite a few stops to do so and didn't get walking until 10.30. There were 2 vehicles parked in the car park, it'll be strange if I actually meet someone on the mountain! I'm not a sun-worshipper (just as well on given my hill trips) but it was just grand to stroll up the path in the calm air and warm sun, a real suntrap for a while. A bit of birdsong, something else I haven't heard in the mountains this past 2 weeks. The path is narrow at first and in a couple of places goes right on the edge of the little gorge and its tumbling stream and waterfalls. Past the thick heather the path becomes a bit more rocky. It was covered in ice, I was amazed how icy it was at this low level compared to the heights of the Glen Shiel ridge of yesterday. Gradually gaining height there's another waterfall reached a little before the path turns left and crosses the stream. Your objective looms large and looks impregnable from this angle, unless you're a rock climber. At one point the noise of the stream faded behind and all became hushed except for the gentle trickle of melt-water as it ran beneath the ice on the path. A look back to the way I'd come, Loch Slapin and Torrin in the distance with the Glen Shiel mountains beyond. As you turn into the lower corrie the outlook changes, with a view to the small bealach on the south ridge at the head. 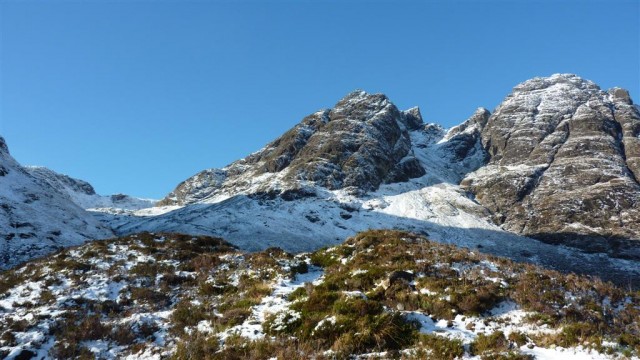 Out of the vegetation, just rock ahead now. There was a section of iced slabs that I skirted, and now some snow. Footsteps in the snow showed that yes, someone alse was indeed about. I decided to take a detour up over the scree to near the cliff-edge to have a closer look at some of the gullies. Great boulder-filled things cutting well into the rock. I continued on a rising traverse near the rock along what were maybe sheep tracks, although one section was very pronounced as perhaps a path. A climb down into the rubble bed of exit gullies and a climb up the other side. Now at 400m and a view over to Loch Fionna-choire between the south ridge and An Stac. I got back onto the path and went all the way up to take a look at Great Gully and the gap between the north and south tops. I was tempted to go to the south ridge bealach, up to the south top and over to the north. It looks a superb proposition but I reminded myself that I'm tired! Up to the right instead, and the gully described in WH came into view. Up this monstrosity, not too bad really although I got out of it on the left as soon as I could onto rock/grass/snow. Staggeringly good views back - now above the height of An Stac. The slope opens out after the gully, I moved over to the right for the views of the rock architecture. And this out to Rum, getting hazy with high cloud now and lower cloud forming just above the top. I moved up to a large cairn that marks the route on to Clach Glas (and the head of a vertical gully). Just beyond this I spotted 4 guys coming down, I headed over toward them and we stopped for a quick hello, they'd climbed Great Gully and told me I'd find it hard to tear myself away from the views at the top (I found out on the interweb that they were from Skye Guides). I got the crampons on and axe out now, the snow was suddenly much harder and surprisingly excellent to walk on even with the covering of new soft snow. The wind suddenly strenghtened and it felt bitterly cold, I braced myself against it to avoid being blown down a nearby gully. I should have learned from yesterday and had some food, feeling weary now, but wanted to get to the top before the weather closed in.

To the left at the top where there's the choice of the gully on the right or rocks on the left, I chose the latter since the guys had left a convenient trail. If you slipped far down the small gully shown, you'd be funnelled to the right into a much bigger gully! Over the easy rocks and the cairn with trig point were soon in sight, with everything satisfyingly covered in rime ice. I've read the various walker's reports on WH about the different ways of climbing Bla Bheinn. I can say that doing it this way, waiting for that first sight of the Black Cuillin, probably can't be beaten for a first time since you're in suspense - you see the summit gubbins first then, just a few steps on, keeping it right to the last, this hits you, no words necessary...... Stunning as it was, disappointingly it was no place to stop for a bite, just too cold now and fingers already going numb. Shame I wasn't a bit earlier, maybe I shouldn't have spent time exploring, so down it was following the earlier tracks. I descended rapidly and had food at last when I stopped to take crampons off. Another rapid descent, surpisingly the scree and icy path proving to be no problem. What more could you want after a day like this, except this scene with a low sun glowing as I made my way back along the road to Broadford. And this last look back to the bridge to Skye. Nearly 100 photos taken, it was that sort of day.

Brilliant, what a day after your weekend adventures

Shame you couldn't stop for lunch at the top.

Fantastic pictures. Really jealous. Skye in all its beautiful glory!

Cracking stuff yokehead - you're having a whale of a time !

Climbed this one nearly 18 months ago when on holiday with all my family,and had briliant views all the way until 1/2 before the tp,and then saw hee-haw from then on in,but still loved every single moment

That makes me very jelous. Great shots and a great day out by the looks of it

A hill to go back to for sure.

Yes go back on a good day, certainly is a hill worth more than the 1 visit. Seems there's many routes on offer as well as those views.

Wow! Amazing report and photos! So

Fantastic photo's and a great report, its a pity it was too cold to enjoy a bite at the summit, what a summit view. There's no wonder you took 100 pics. Enjoyed seeing em and reading the report, thanks for posting

What a cracking week you have had by the sound of it. I have enjoyed reading of your adventures during the week.

Glad you finaly had a good day weather-wise, but i am a tad jealous