Liathach - The return, seemed much tougher!

Liathach - The return, seemed much tougher!


This little outing was suggested by Tommy who had the weekend off, our original plan was to pick off one of Parminders Glencoe hills but the chance to visit the mighty Liathach again was too good to turn down. The final decision would be made on Thu/Fri depending on the forecast. The last thing we wanted to do was spend 7 hours on the road to get a good soaking. As the week progressed the forecast improved but as with all forecasts we are very sceptical.
I knew for a fact that the weather couldn't be any better than my last visit 5 years ago as that was a total one off and very special. Another reason for agreeing to volunteer for such a long day is that autumn is just around the corner and we won't get another chance this year to visit Torridon.
Decision made, now to sort out the finer details. Tommy was heading up the night before and staying in his van. We arranged to meet him at the finishing parking area and pick him up and then park my car at the start. As the journey is about 200 miles each way, I suggested we breakfast at McDonalds in Inverness, but they don't open until 7am. I guestimated that it would take us about 2 & half hours to reach Inverness so we met at our usual spot at 4.30am.
The journey north was a breeze with the only roadworks still ongoing north of Perth and very little traffic - for obvious reasons.
We arrived outside Tommy's van shortly after 8am and opted to stay in the car as the midges were ready for their breakfast. Tommy jumped in the car along with a few of his little friends and once we parked up a couple of miles along the road we were soon on our way in full protective equipment.

Here we go, dressed up for ?

Looking along the single track road towards Kinlochewe

Leaving our gaiters in the car probably wasn't the smartest move, but we would soon dry out

It's almost a "guess who is behind the mask"?

Kind of shows how low the cloud is

First bit of easy ‘hands on’

Not convinced George can see, as it looks like he is groping for the rock

Parminder getting himself prepared

Plenty of ascending still to be tackled

Water feature, not much more higher up apart from what fell out of the sky

Not sure what was being discussed?

In and out of cloud now

Gradient has eased a bit now

Parminder’s camera making a rare appearance, he had to blow the dust off it first

The hills to the south peeking out again

The face of concentration

A wee hole in the cloud

Looking back down, more walkers heading up

Nearing the end of the long ascent

View SE again, won’t be long before you get to see what lies to the north

And at long last a view to the north, it will get better

We started heading east in the “hope” of seeing Beinn Eighe, but we abandoned that idea after about 10mins

If looks could kill

Never seen this colour before on rocks

Tommy taking in the view

This was when it rained/drizzled for about 20mins or so

A proper action shot, not sure what is going on?

Who could this be?

Slightly clearer shot, you can see the track way down below that takes you in or out of Beinn Eighe

The view to the north again, plenty of small lochans

View north from the first summit

The way ahead, looks very intimidating

View to the west to other end of the ridge

Still quite a bit of scrambling left, another couple of walkers in the shot

Bit of descending to tackle

The way ahead, you can see a couple of walkers on the left hand side

This shot gives you some idea of the terrain, not much flat stuff

Sleeves getting rolled up, must be getting serious

On all fours again

Looking back again, you can see the ‘interesting’ descent off the first summit

This guy went whizzing past, I did say I would give him a mention

Parminder trying to smile whilst holding on

George head down and concentrating

Another guy who loosely tagged along with us

Undulating is the word I think

View to the south for a change

Yes that is the way up

Kind of shows how steep the drop must be

Loch Torridon and the final walk trudge up to the summit

Looking back all the way along the ridge

Mind and wash your trousers Tommy

Still a long way down yet

The descent route ahead

A few camera photo's, always take my camera as the zoom facility on my phone is pants. 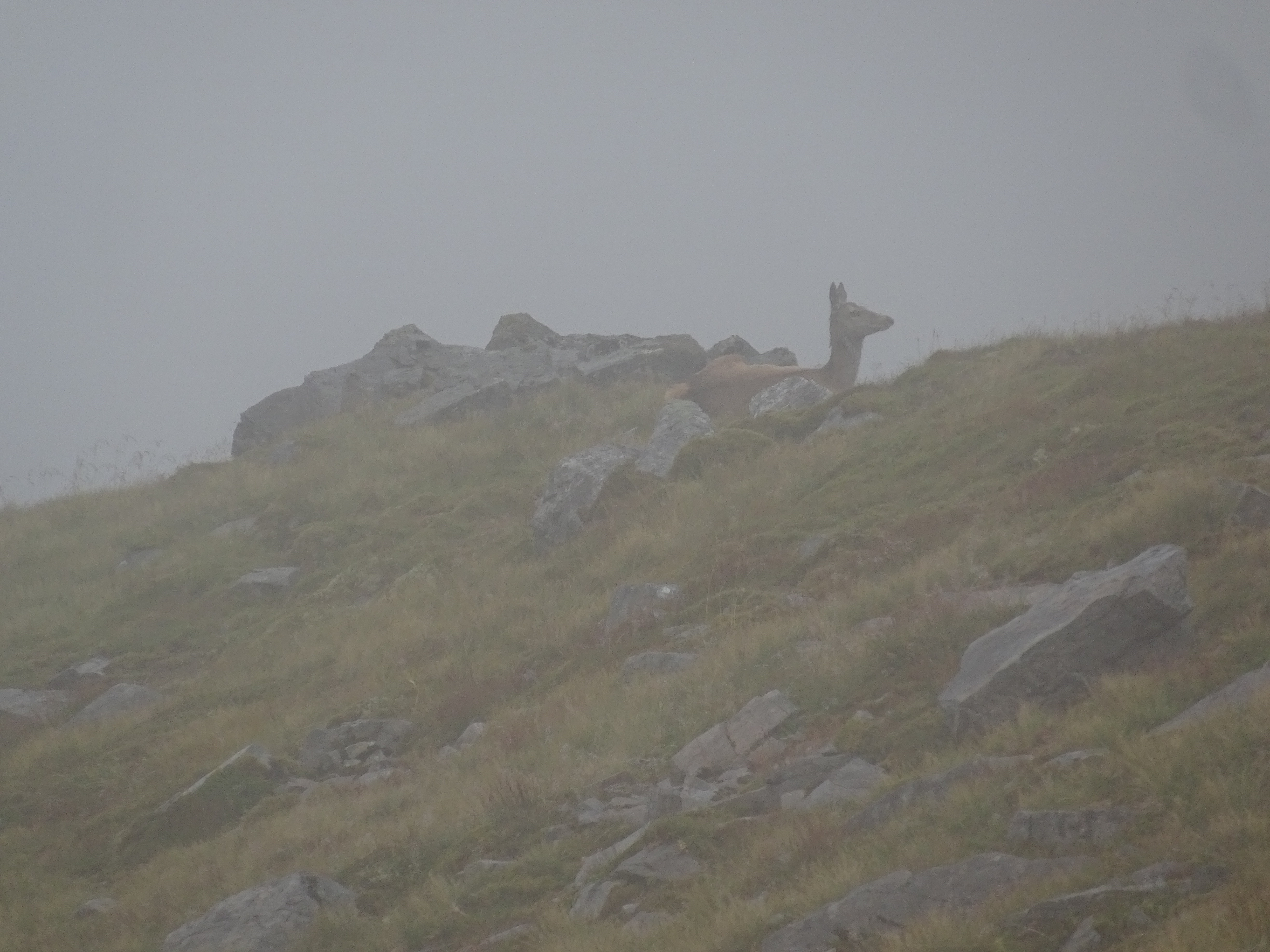 This was a point, zoom and shoot, only saw it's head as it was so far away 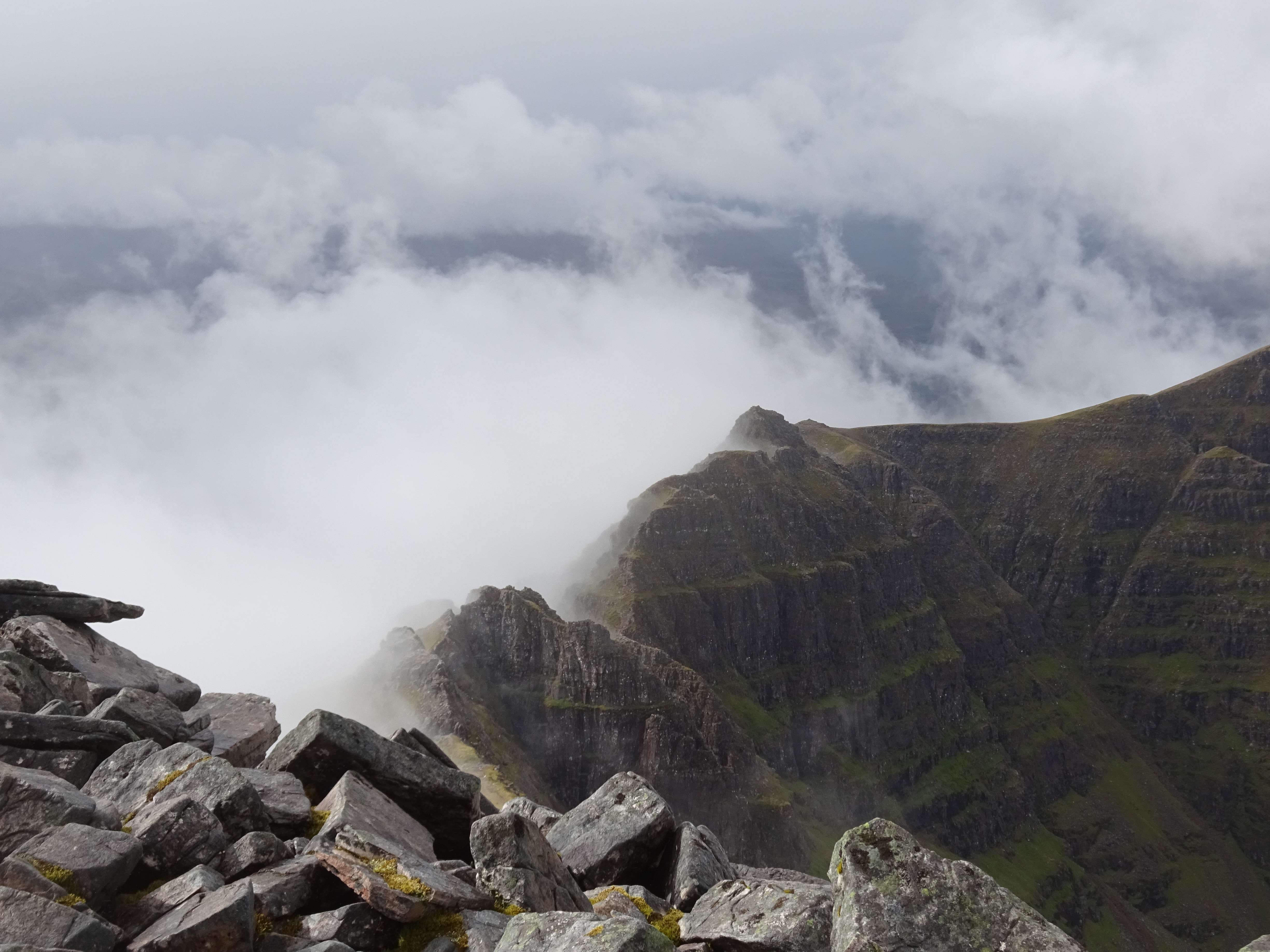 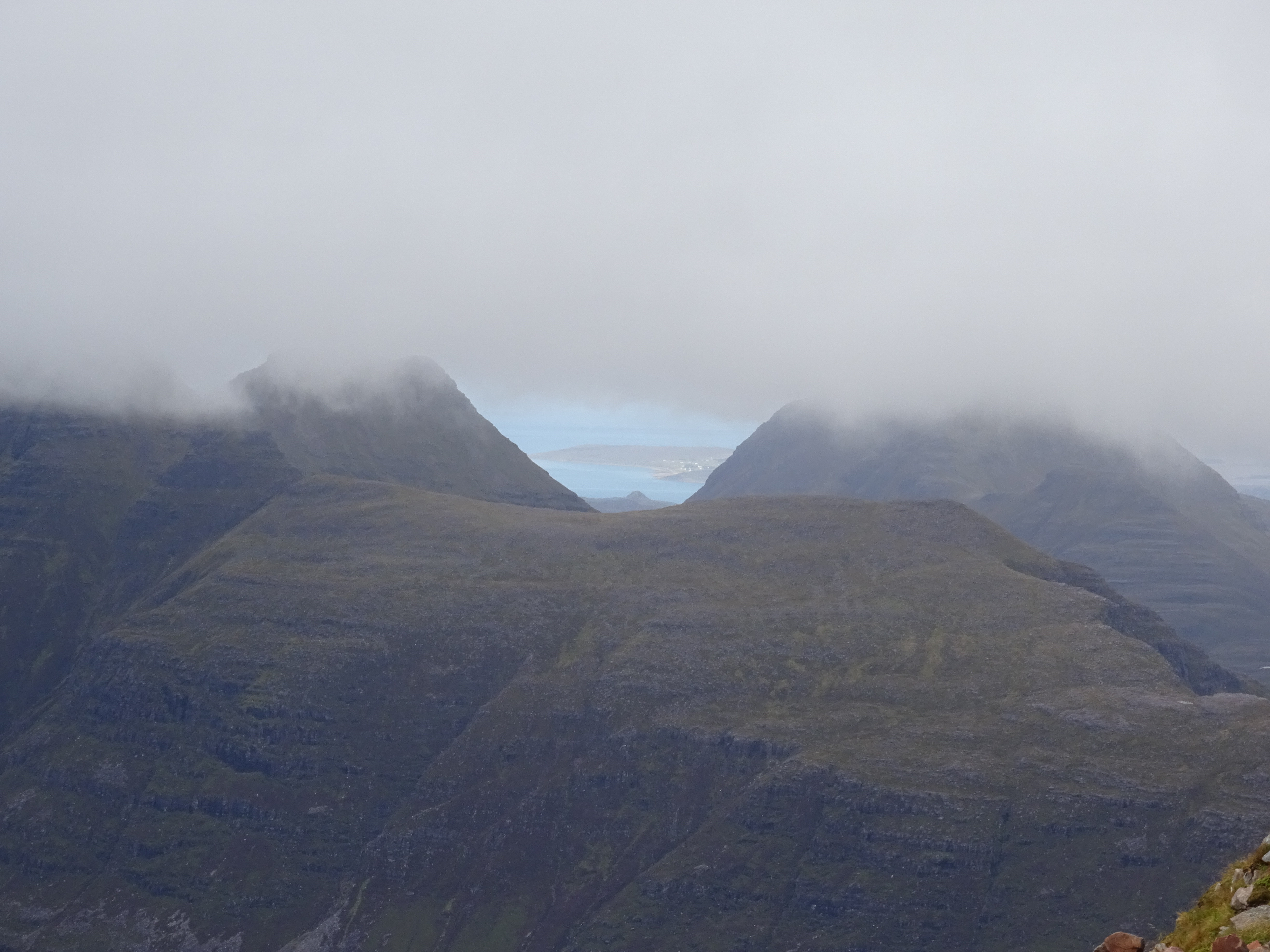 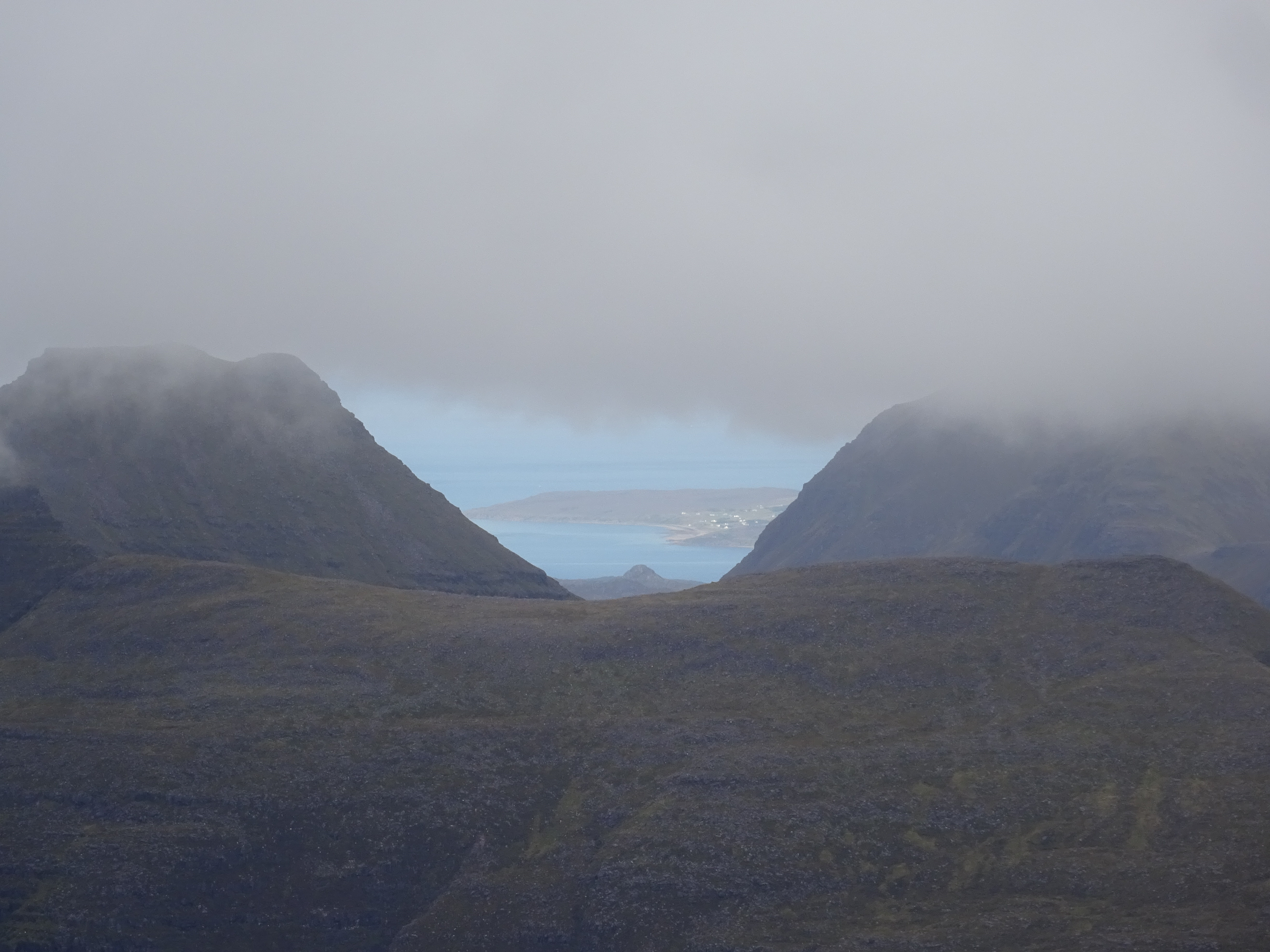 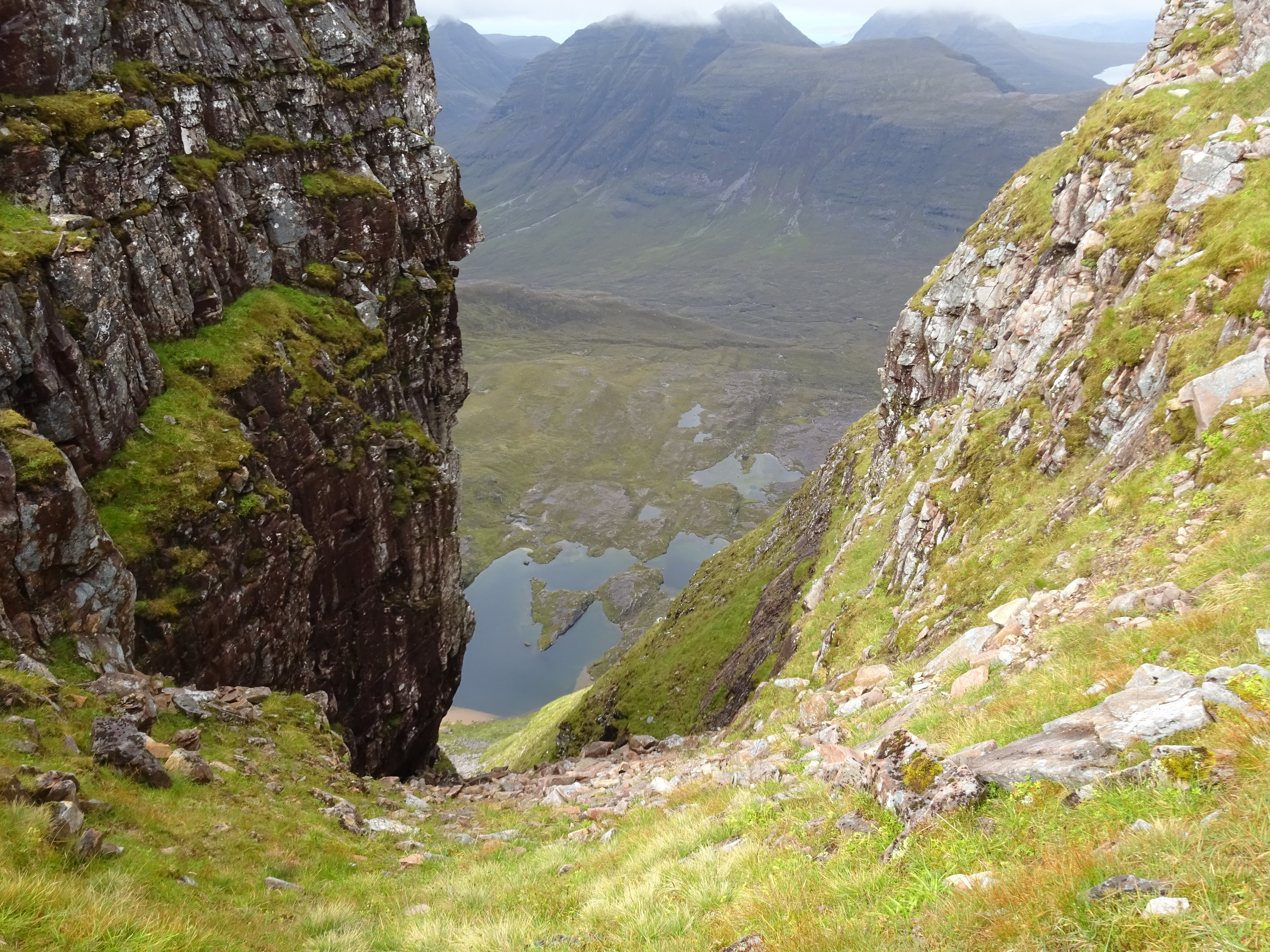 Nice gully, we met another walker who told us he skied down the gully, looks rather steep!! 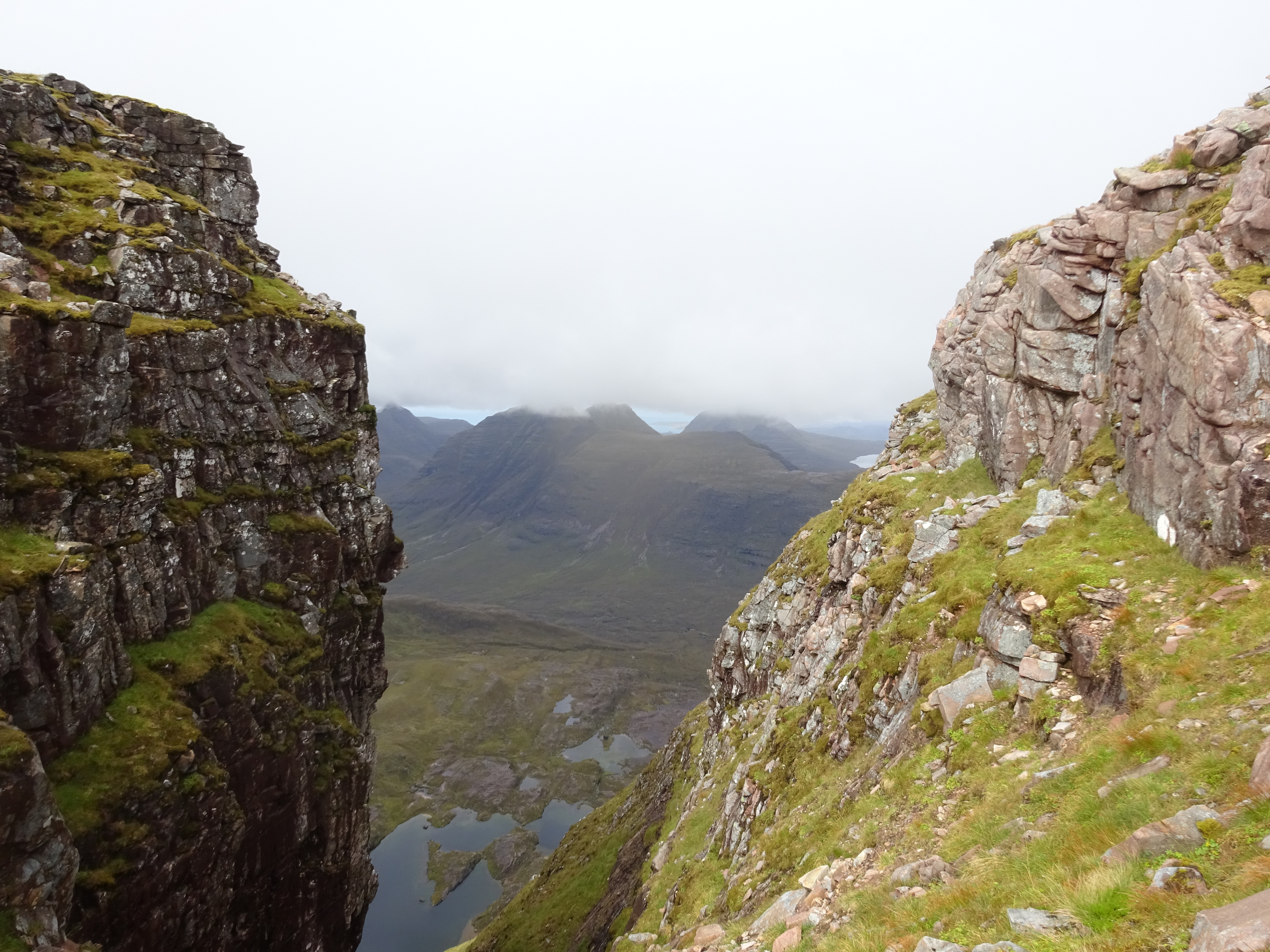 Same shot as above but zoomed and raised a bit 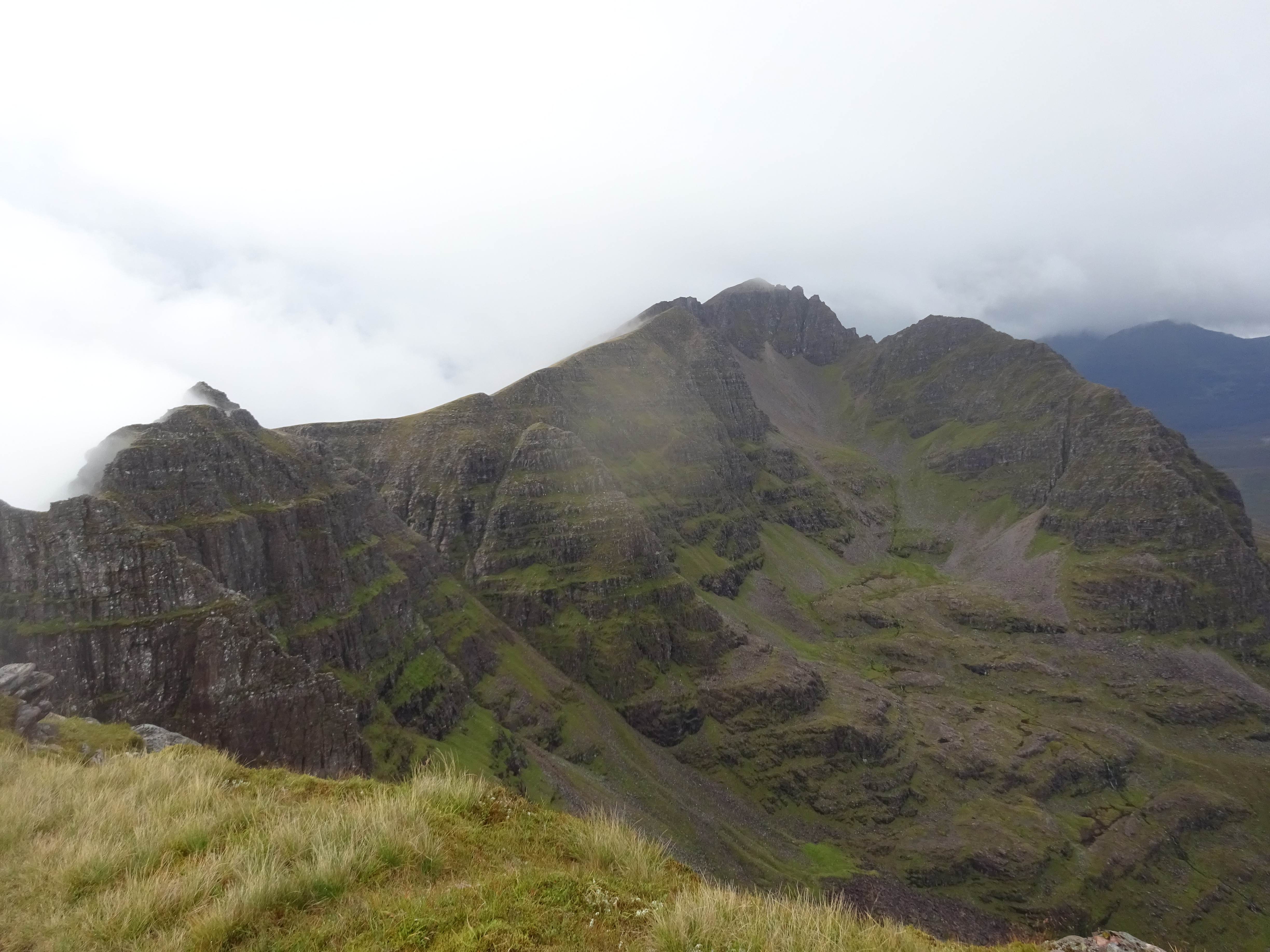 The ridge with the northern pinnacles on the right 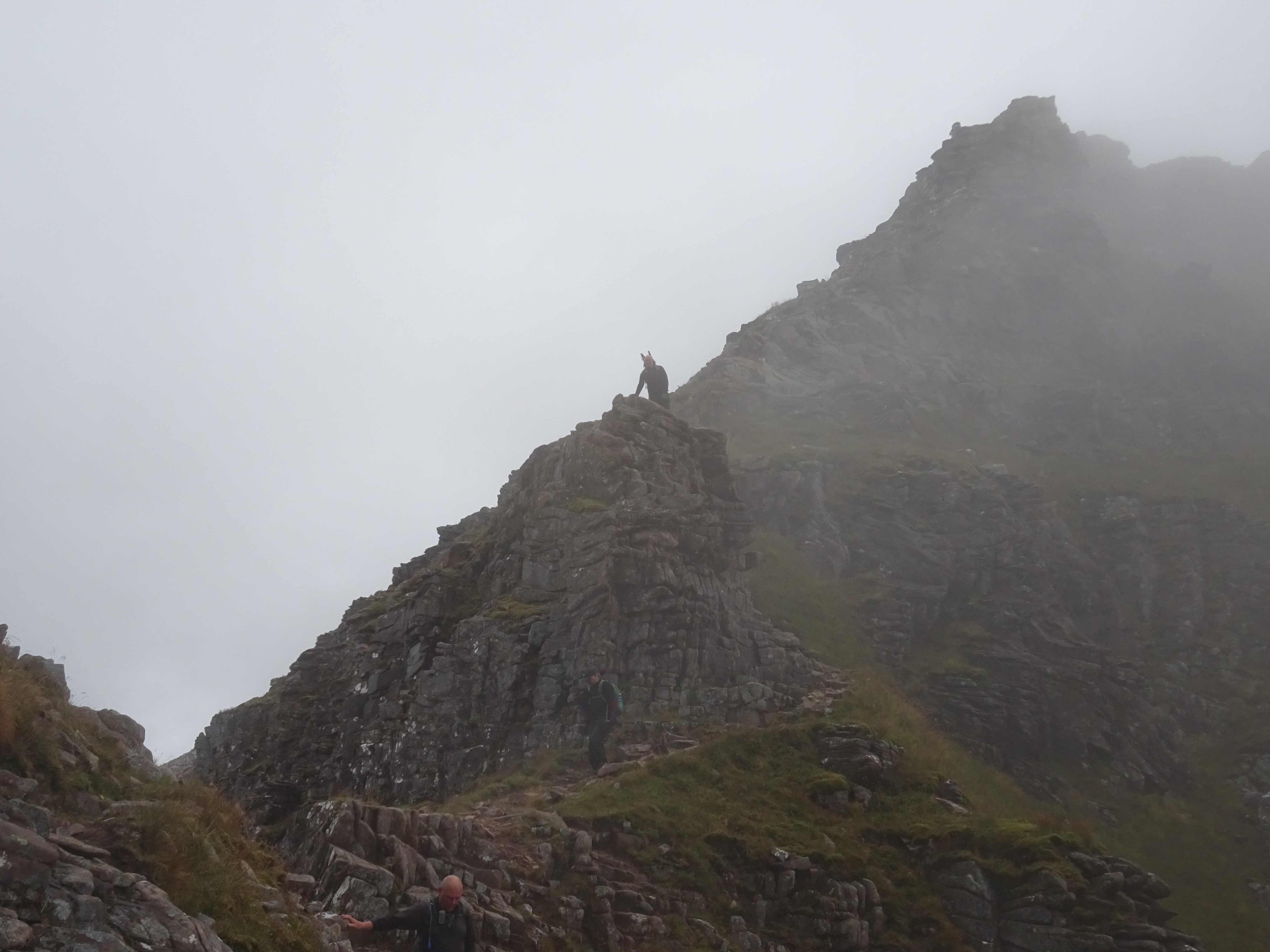 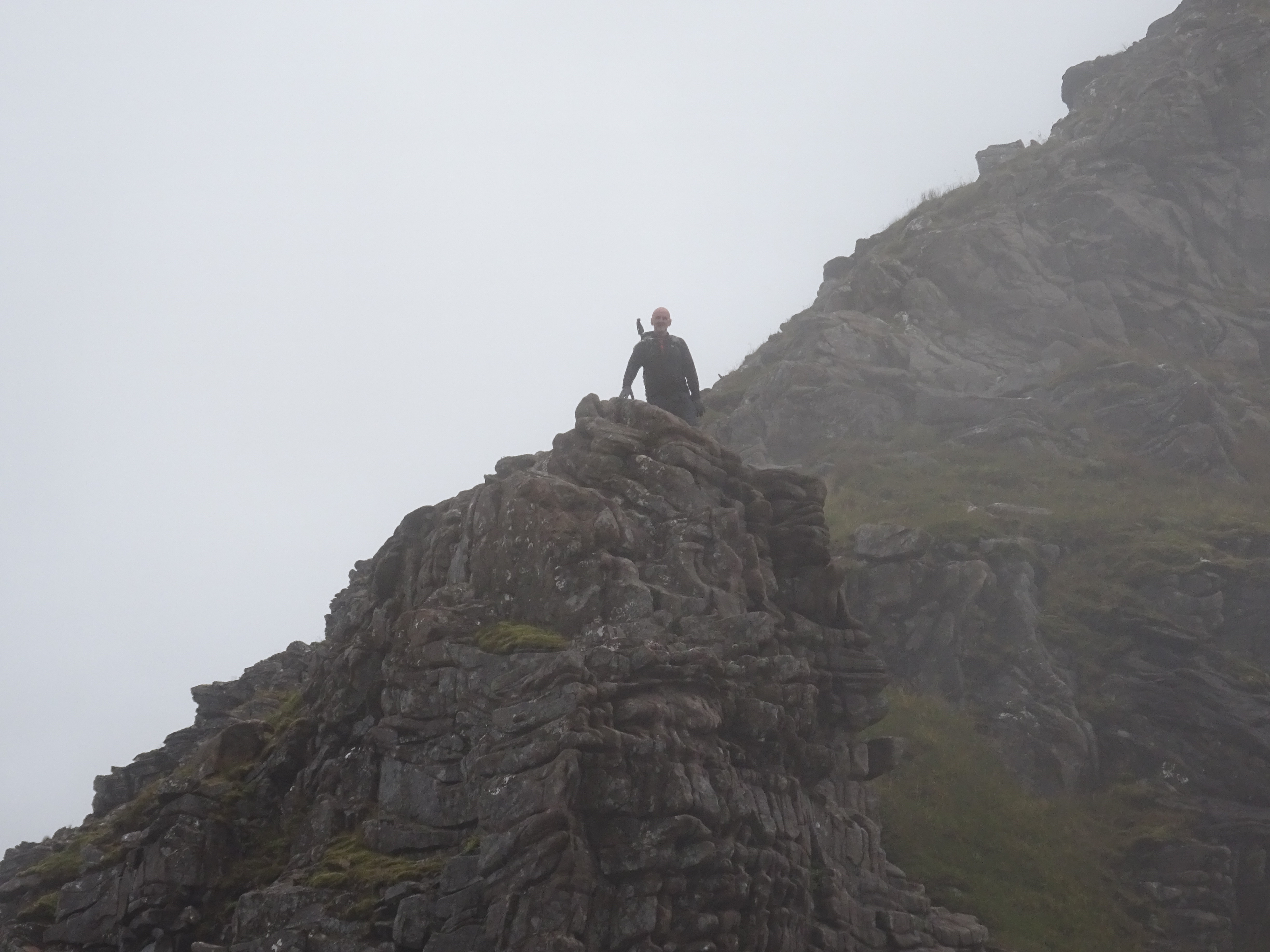 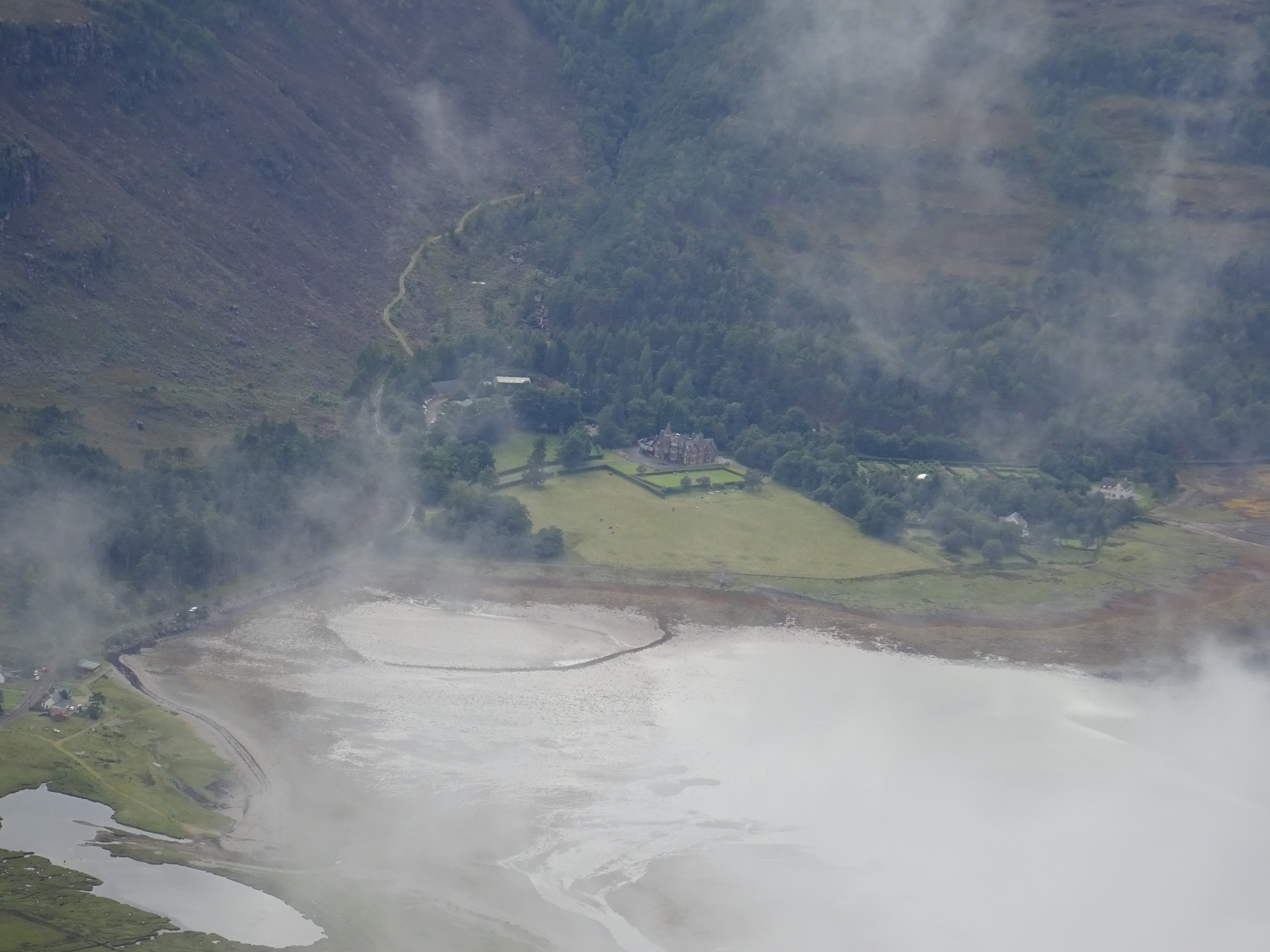 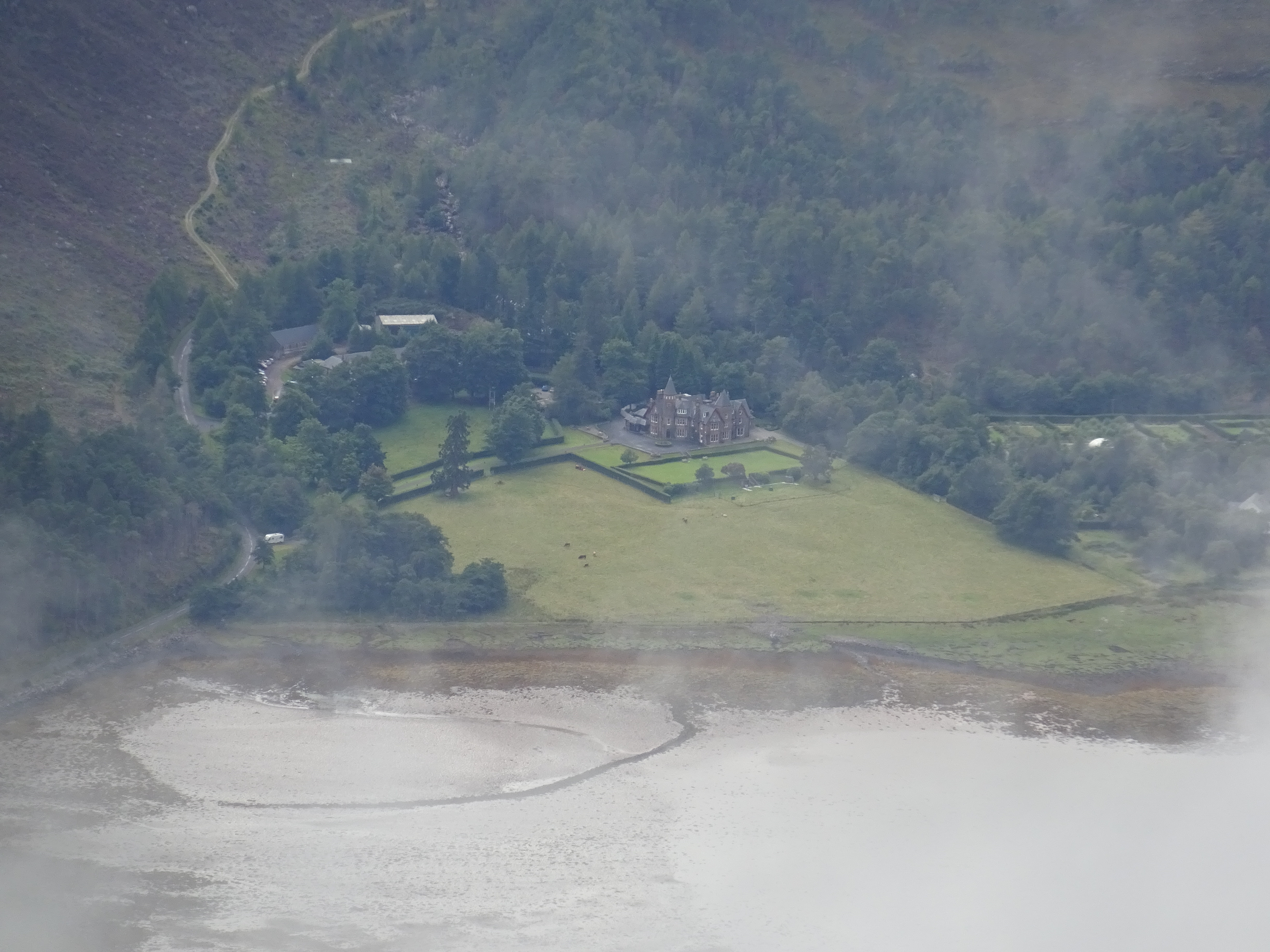 Sun still shining on Gairloch, love the break in the cloud

What a fantastic day, long but enjoyable from the time we left Fife. Having looked at my previous report one of the reasons I maybe found this traverse harder were the underfoot conditions. Wet rocks and rubber soled boots don't really inspire one with confidence, even new boots with plenty of tread. We arrived back in Fife shortly after 8pm all pretty exhausted but so glad we changed our plan. I took almost 300 photo's and was determined to try and photo as much of the traverse as I could.
Next on the agenda for us is a trip to Ailsa Craig, also weather permitting.

Looked good fun Martin. You seem to be cracking through your second round now. I remember a great day on this hill, although the decent off the second Munro wasn't particularly pleasant as I recall.

Fantastic. Great report of a very scary mountain! I must go back to Liathach - missed the pinnacles when we did it, Kevin wouldn't let me do the scrambling (overprotective husband!).

The initially thick mist lifted later in the day and slowly revealed the views. Midges were bad though - I must invest in the right headgear

Thanks for the write up Martin, it was a good day and I did find it a bit mentally taxing than my last visit for some reason . Maybe the damp conditions played with my head. Funny though, we did it in a quicker time than my last visit which I didnt expect as I was trying to take my time other than on the final descent.
Great company again on a great outing.

Excellent report and photo's MB Thanks for your company on a tough shift Guys, thanks for driving MB and G for the double whopper... :

Cheers guys for a great day,thoroughly enjoyed it.
5 days later and my legs are still tender, suppose mondays walk didnt help though.