A pearl of a walk on Shellfish Peak

A pearl of a walk on Shellfish Peak


Well, 2020 is unlikely to go down in anyone's hillwalking annals as a vintage year

, but with the 5-mile restriction finally having been lifted in July, I was determined to get some decent walks in, so I took an Annual Leave day on Friday 24th July and booked a room for the Friday night at the newly re-opened Invergarry Hotel (which has good food and a strategic location

), so that I could hopefully get a walk in both on the Friday and on the Saturday before driving back south.
The target hills were Sgurr a' Mhaoraich at the head of Loch Quoich, and Ciste Dubh in Glen Shiel - both fine peaks by all accounts. However, the forecast was excellent for the Friday but decidedly less so for the Saturday, and I swithered for a while over which hill to devote the good-weather day to

. In the end, Sgurr a' Mhaoraich won out, partly because I've resigned myself by now to the vast majority of Glen Shiel hillwalks being in the p***ing rain

, but also because Mhaoraich was said to have spectacular views of the western seaboard, and it seemed a shame to miss out on that ... Also, I was keen to do a circular route returning along Mhaoraich's northern Am Bathaich ridge as recommended in the website's route description, and by the sounds of it that needed a clear day; whereas Ciste Dubh sounded a much more straightforward walk if the weather was dreich. With the benefit of hindsight, I'd say this was definitely the correct decision for once

.
Sgurr a' Mhaoraich is "Shellfish Peak", and it certainly keeps itself as well protected as any mollusc, tucked away as it is way out in the WIld West up the single-track Kinlochhourn road, at the western end of Loch Quoich. However, I set off reasonably early from Glasgow and got a very quick run up the road (one benefit of the COVID-19 pandemic I suppose

). I found a rather tight parking area immediately west of the bridge over the northern arm of the loch - room for just one car parked tidily. I needn't have gone to the trouble, though - when I set off, I found a much better parking area just around a bend about 100 metres further west, with room for at least three cars and completely empty

- ah well, you live and learn.
The start of the walk proper was about 500 metres further west, where a stalkers' path leaves the road to the north, marked by a metal pole. 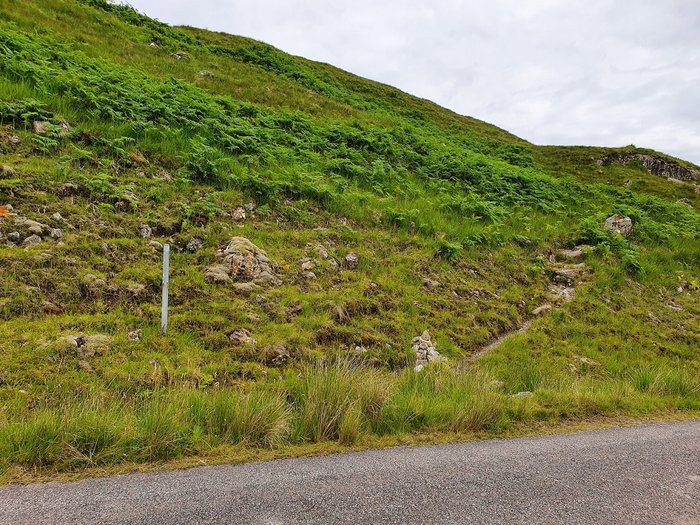 As is usual with its kin, the stalkers' path made for a delightfully easy start to the walk, taking a gently zigzagging route up Mhaoraich's south ridge. There were continuously impressive views of Gairich lording it over Loch Quoich directly to the south, although at this point in the morning it was still sporting a wee hat of Clag. The forecast was that that would soon burn off, though 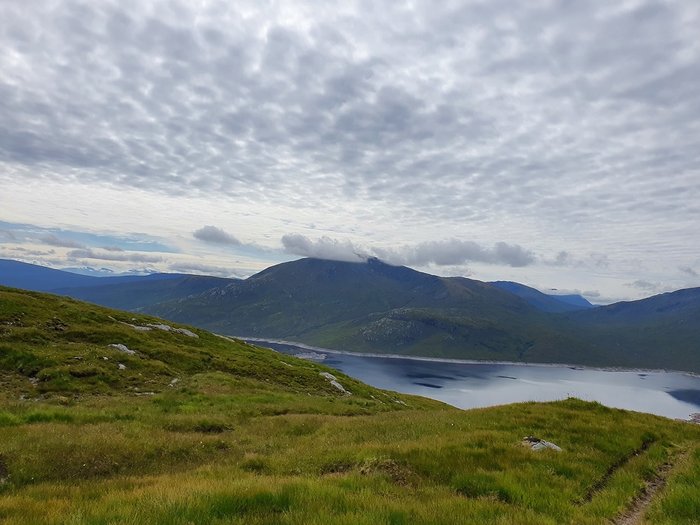 A bit higher up, I encountered some of the local gentry: 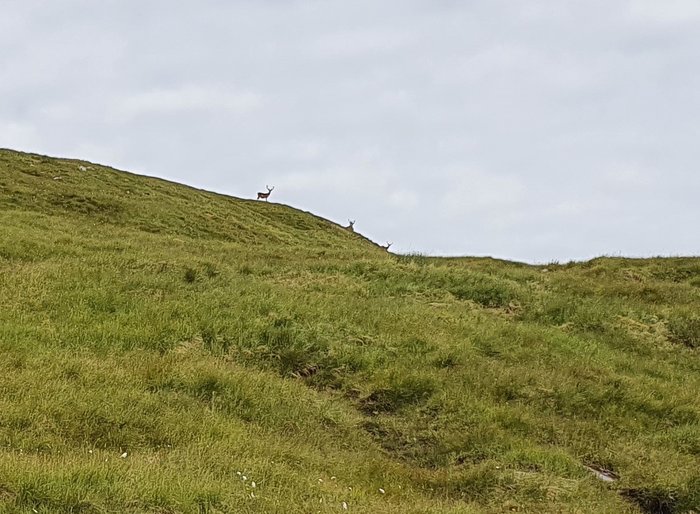 The best of the views on ascent were to the south and southwest across the loch, and before long Gairich and pals had extracted their heads from the cloud. Gairich is to the left here, then the Corbett Sgurr an Fhuarain and the remote Munro, Sgurr Mor - it was quite a relief to realise that I'd climbed all that lot and that I wouldn't have to traipse way back out Lonely Glen Kingie for a while, to be honest 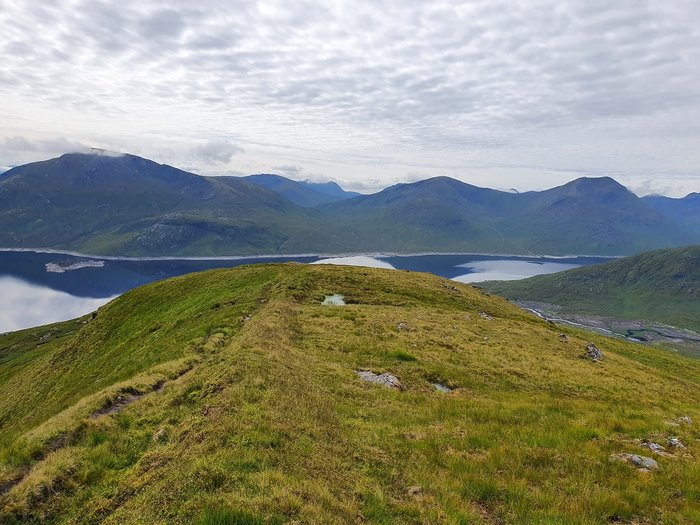 West of Sgurr Mor again was the ever-impressive and improbable-looking cone of Sgurr na Ciche: 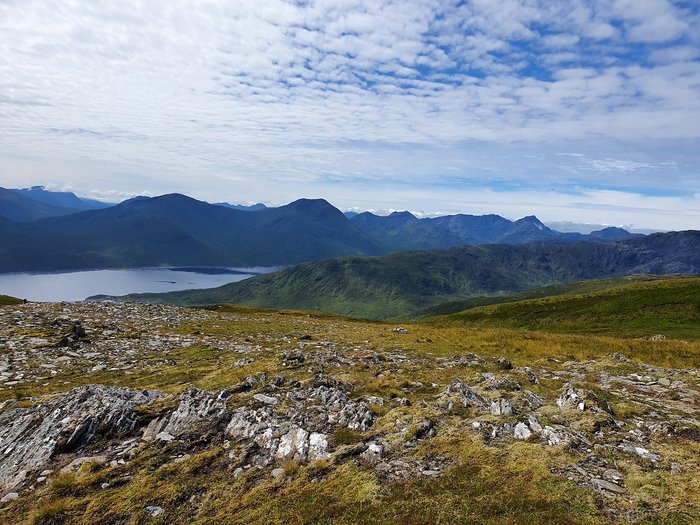 The views provided some much-needed distraction from the ascent, and it didn't seem long before Mhaoraich's summit environs came into view. 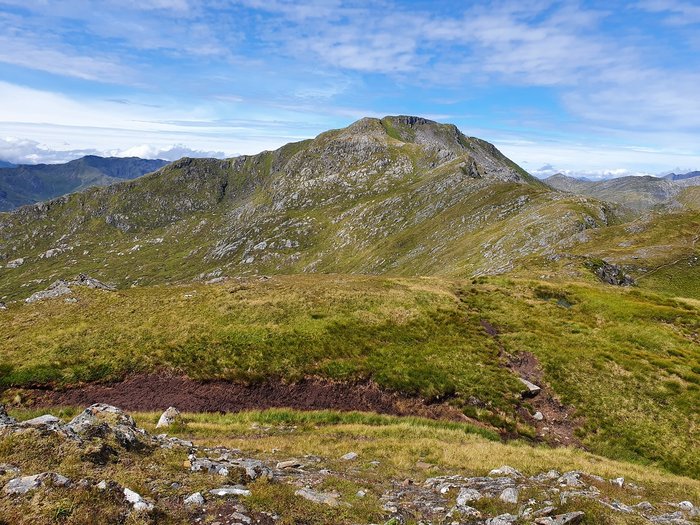 After traversing the minor (but impressively named) top of Sgurr Coire nan Eiricheallach, the path crosses an unlikely-looking drystane dyke. Like the even more unlikely-looking one that runs right along Garbh Chioch Mhor in Glendessary, this construction really makes you feel sorry for those poor b***ers who had to build the thing back in the Bad Old Days of Victorian feudal landlords, at the same time as you marvel at their (somewhat pointless but impressive) achievement. 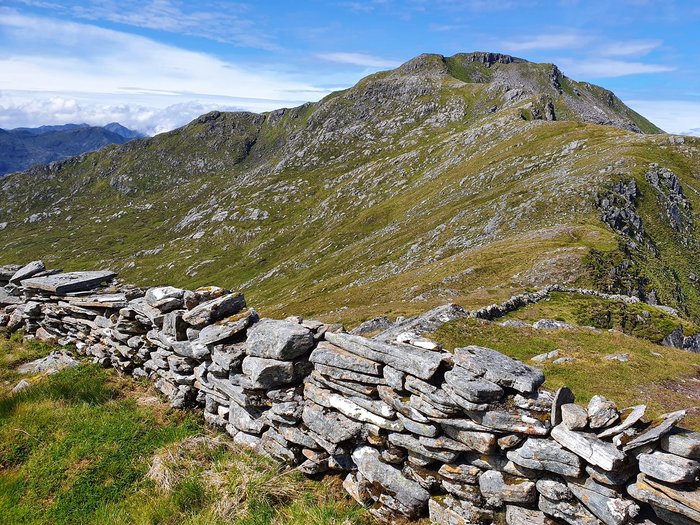 Nearly at the summit now, and a fascinating rear view of the South Shiel Ridge had opened up. Ever since I walked the blessed thing in a continuous steady downpour and saw next to nothing, I've always been fascinated whenever I see what the S.S. Ridge actually looks like 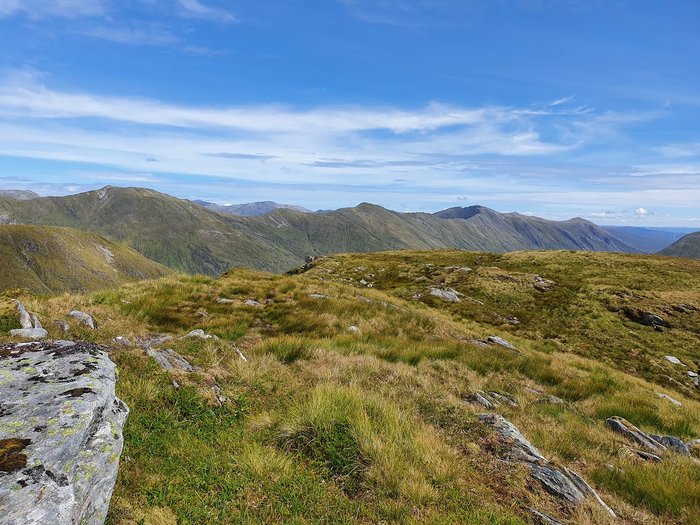 It wasn't that much further to the cairn, where the views truly were spectacular. Looking west down Loch Hourn: 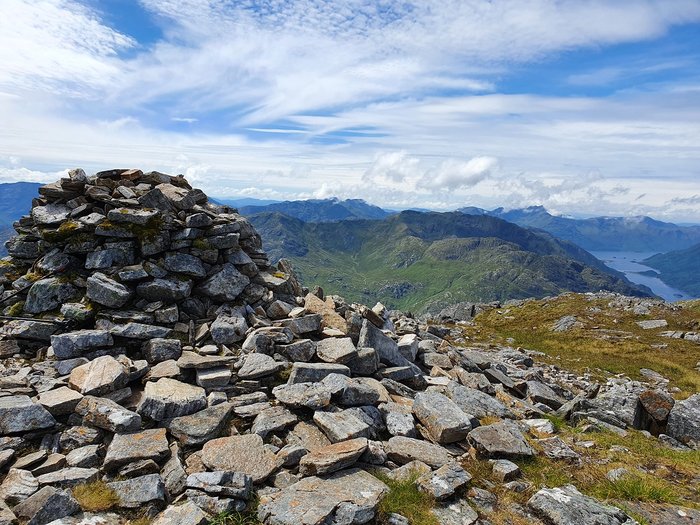 A bit further to the north, the Rough Bounds of Knoydart were looking impressively, um ... well, rough ... with Ladhar Bheinn being prominent. I was supposed to be climbing that sought-after peak back in late May with a couple of ENT surgeons, but needless to say the coronavirus pandemic put paid to that idea 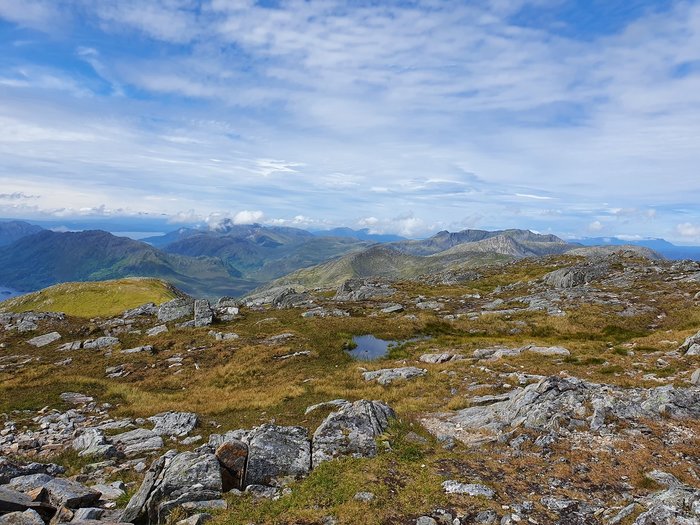 Looking back down the ridge to the east, Gleouraich was looking surprisingly impressive from this angle (although its Gaelic monicker still seems a complete waste of vowels to me 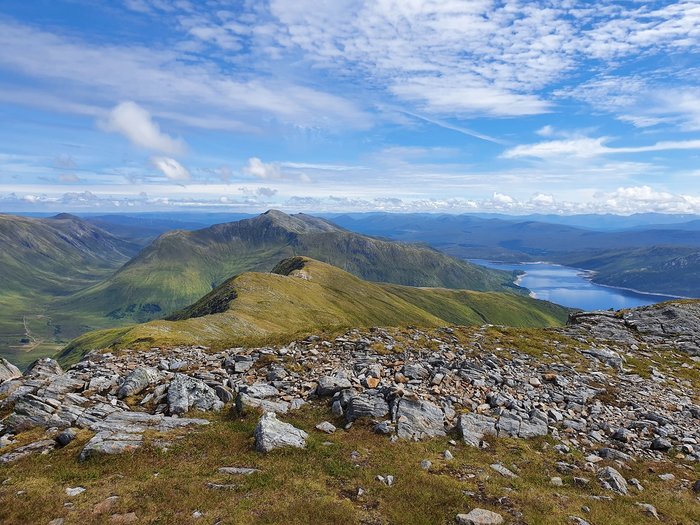 Mountains a-go-go a bit further to the northwest! 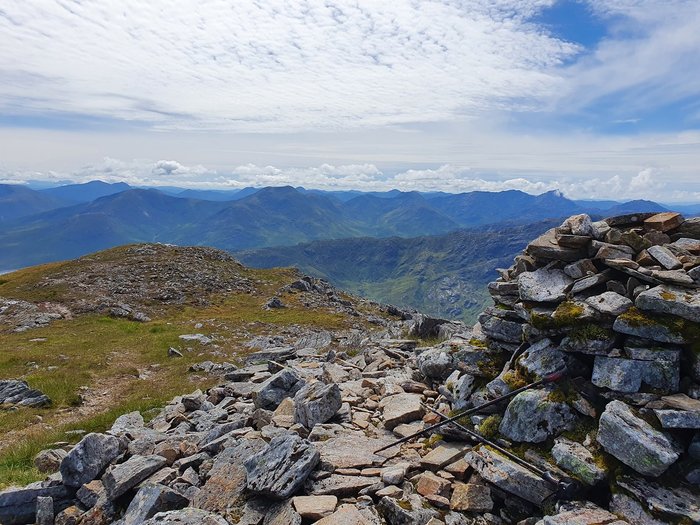 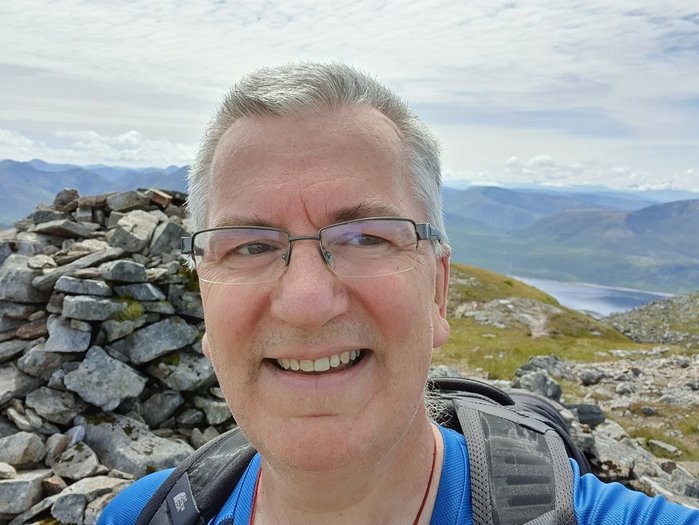 Well, the weather had turned out as good as the forecast for once, and that North Ridge was beckoning ... it did look fairly shapely from this angle, with the whole of the South Shiel Ridge in the background. 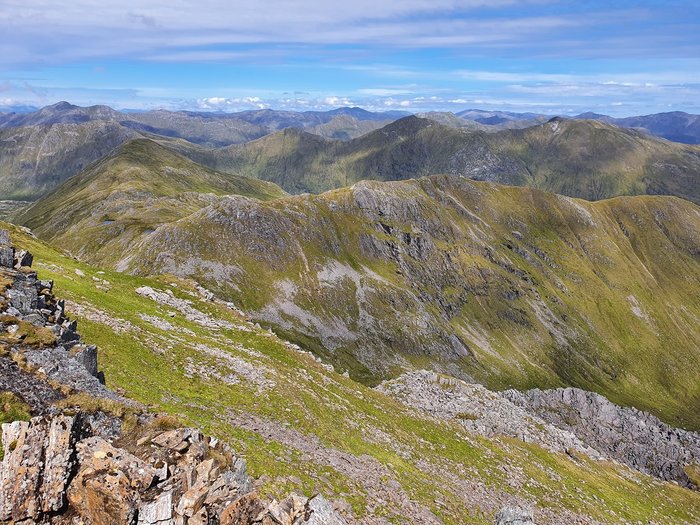 On the initial descent northwest from Mhaoraich's cairn, I was briefly startled by a fine rock pinnacle just to the east, which I initially mistook for another person (and a very big chap he would have been 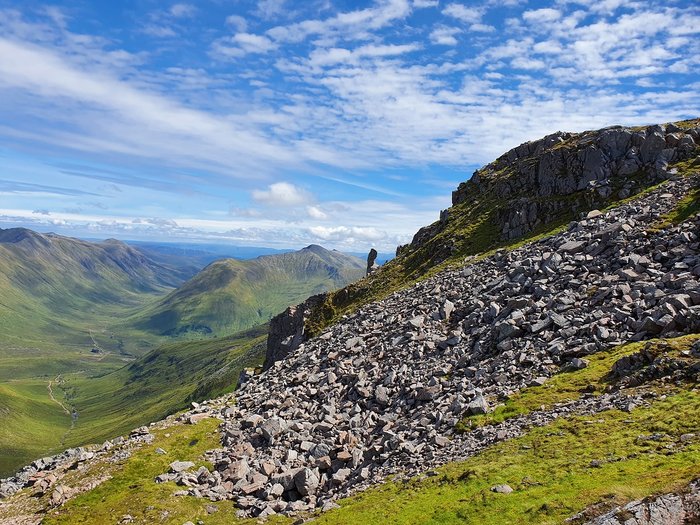 Now, the website's route description does warn of a "steep" descent to the bealach with the Am Bathaich ridge followed by a craggy re-ascent on the other side, but it plays up the cragginess of the re-ascent while rather glossing over the descent. Personally, I found the descent by far the worse of the two, being on very steep grassy slopes strewn with the occasional big pointy boulder: it was distinctly unnerving, and I definitely wouldn't want to have been doing it in worse weather. Admittedly I probably didn't find the easiest line, but still. 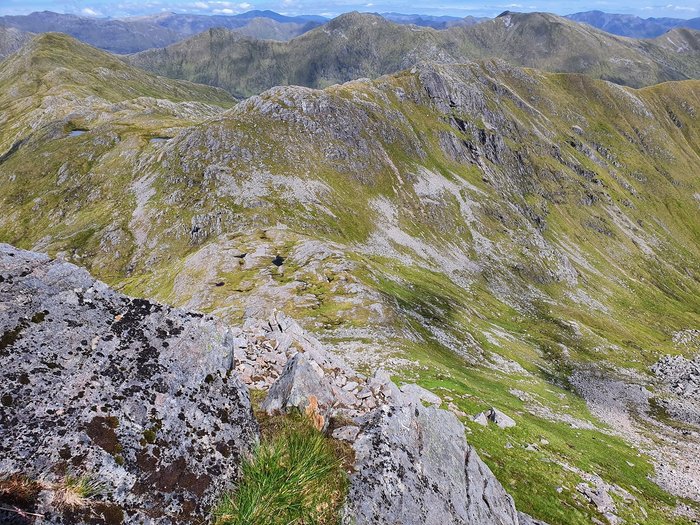 After this, the re-ascent to the north ridge did look a tad craggy, but really nothing to startle the horses, and definitely nothing like as bad as the descent! 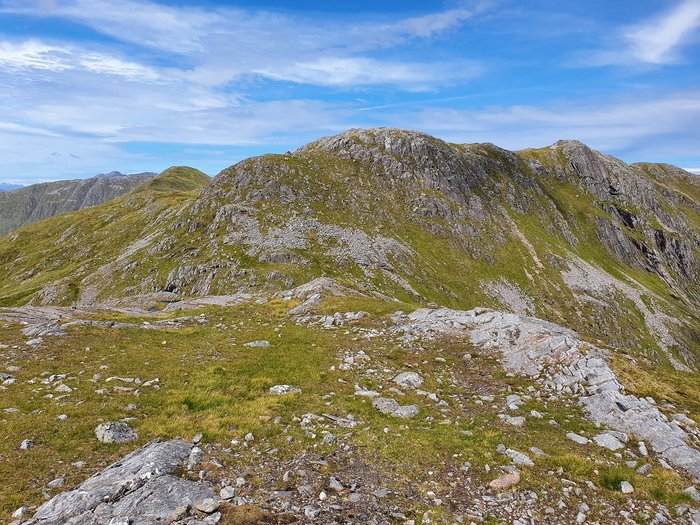 All this had taken me longer than I expected and I was a bit peched when I finally made it up onto the Am Bathaich ridge, but the reward for all that effort was another spectacular view out west: 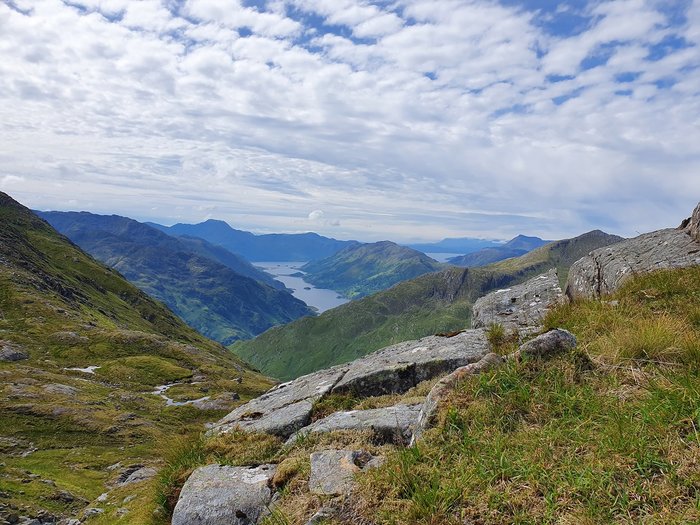 There was an interesting vista back south to Sgurr a' Mhaoraich's hidden craggy northern corries, which are very much more impressive than its blander southern slopes might suggest. 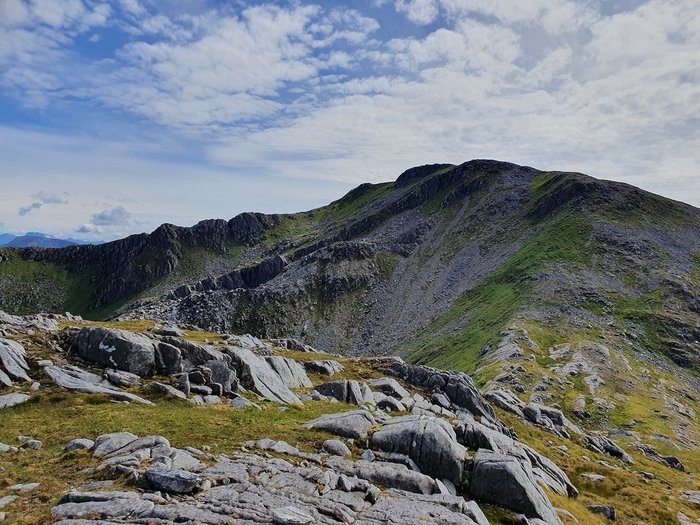 A very nice ridge walk indeed now ensued, back east along the Am Bathaich ridge, with Gleouraich looking glorious in the sunshine across the northern arm of Loch Quoich (although the loch itself was out of sight from up here). 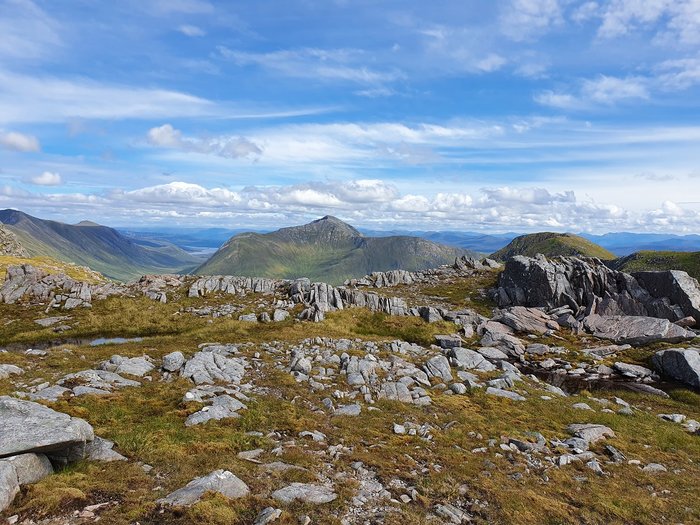 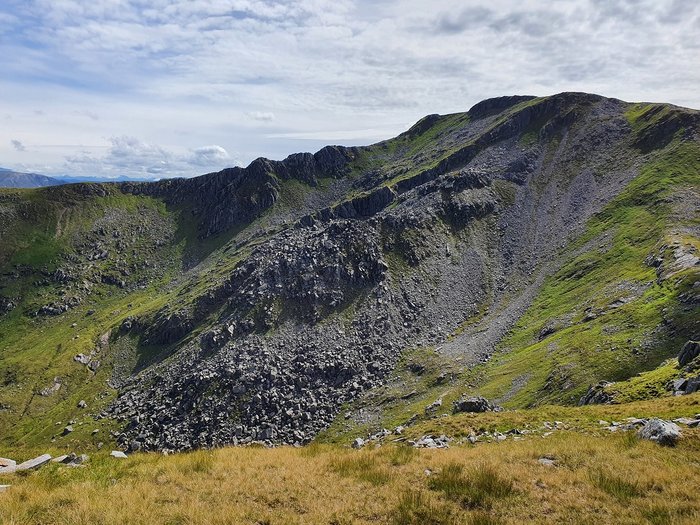 And yet another spectacular view back out west: 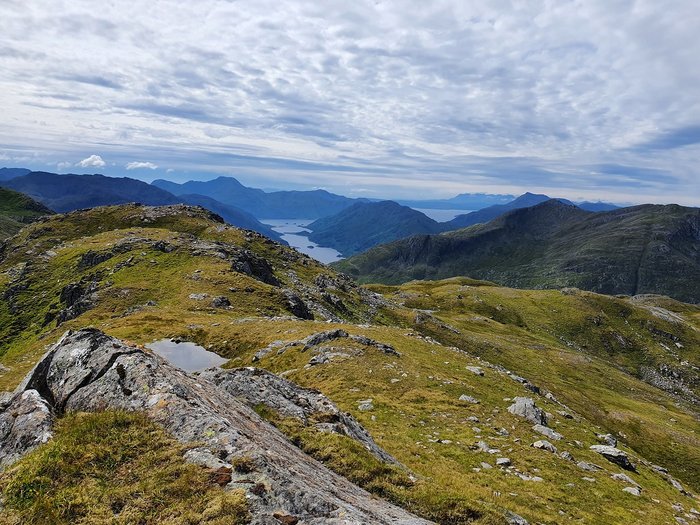 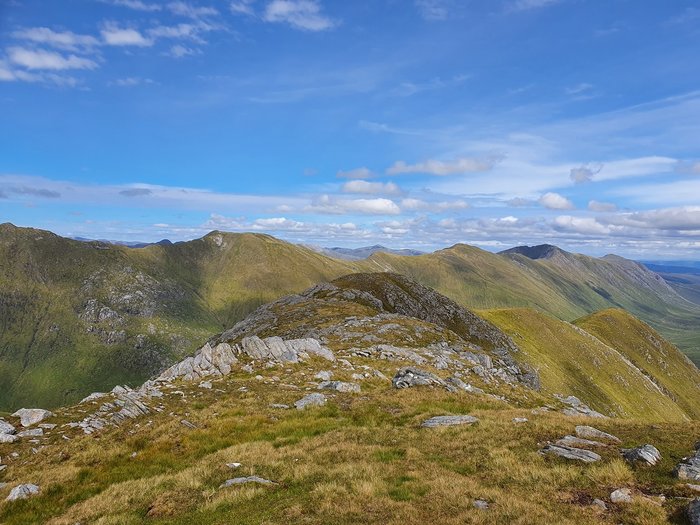 At the end of the ridge, there was another steep, grassy descent, but thankfully this one has a faint stalkers' path that takes a very easy zigzagging route back down to the head of that northern arm of Loch Quoich. Initially I was very glad of its easy zigzags to get me past the steepest bit, but lower down they became a bit of a bore, and I eventually abandoned the path altogether and took a more direct route down to the good track that was visible at the foot of the hill to the east. Once on the track, it was a very straightforward walk back south to the road and my car.
One final fine view of Gleouraich at the start of the descent: 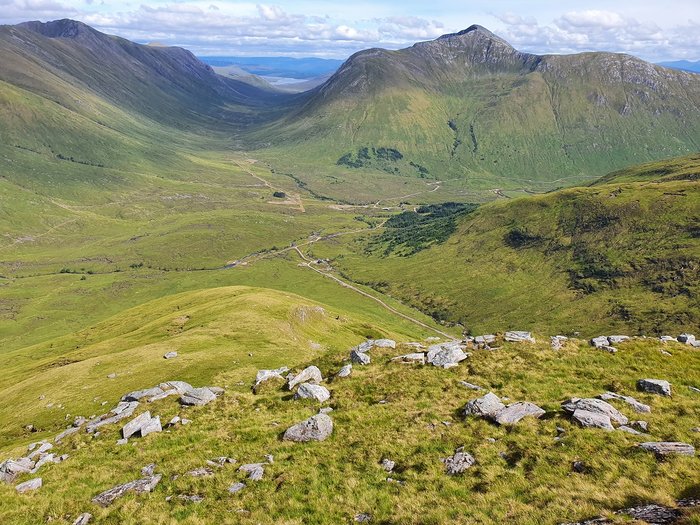 This truly was a pearl of a walk, and even although I suspected (correctly) that I'd end up climing Ciste Dubh in the rain on the Saturday, it was well worth it for today's views

Re: A pearl of a walk on Shellfish Peak

) was arguably my highlight of 2019. I still dream about that day and this report takes me right back there. Thank you.

Re: A pearl of a walk on Shellfish Peak

Graeme D wrote:This hill and this very route (right down to getting annoyed at the constant unnecessary zig-zagging of the grassy path off the end of the Am Bathach ridge

) was arguably my highlight of 2019. I still dream about that day and this report takes me right back there. Thank you.

Thanks for that, and sorry for a rather late reply. Yes, I've had a look at your WR now - lovely photos, particularly that great close-up one of the stag

. I think you got even better weather for it, too!
It's a great route on a fine day, this - the views are just stunning.