We had decided that this hill was to be done in summer, because of the length of the drive rather than the length of the hill. The car park at Inverlochlarig was full by 9:15 on a Sunday, we just managed to find space on the verge. We followed the route in the SMC guide, which made a nice round, with tracks for chatting on, and a ridge to keep us high for a while. (I think my comments on this guide were slightly negative in some of my recent posts, so here is a positive one!) Walking into the forest, all traces of gates to be negotiated were long gone. We found the firebreak and went up the RHS, finding a faint path to follow. 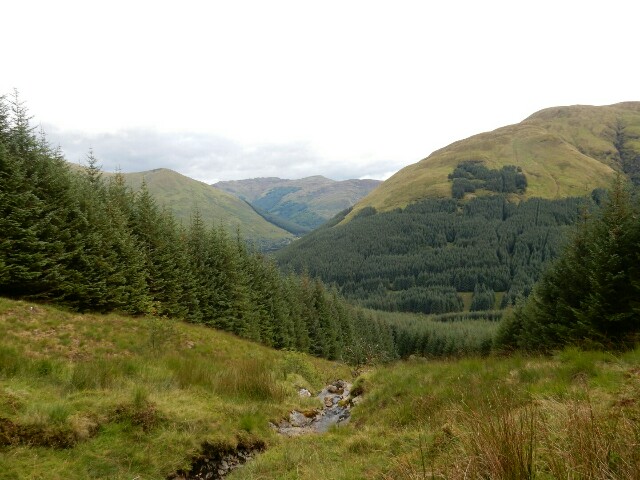 It was very straightforward, apart from the guidebook 'take care' section by a waterfall, which is not a problem for those with good balance on the edge of a steep drop. One of our party opted to scrabble into the trees in search of a less exposed route - discovering a grassy open area to walk through. However some guidance was needed from those by the burn about a safe place to return to them, and of course there were trees in the way.
After that we crossed the burn, and followed the left bank uphill until the ground opened out, when heading left and up brought us out right at the summit. Good views north, though it was rather a dull day.
We ate lunch by the tiny summit cairn, then headed south along the ridge. 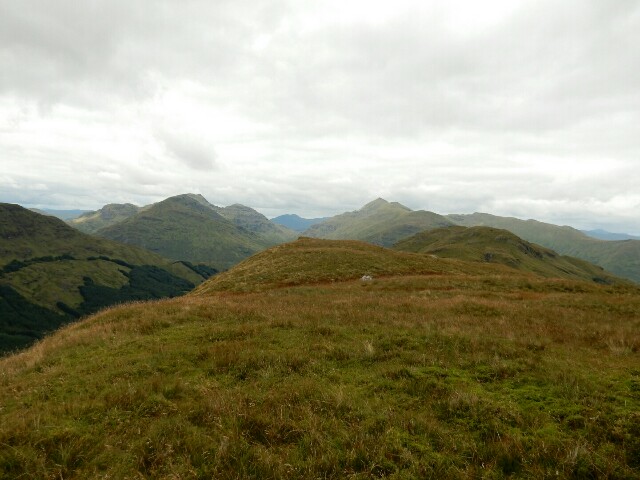 We identified the hills in the southern direction (which were not so photogenic) before heading down to the burn and down, reaching the other track for the return.
Here is our approximate route