A return journey to catch the one that got away last year. See my report from November 2019.

The thing is, this mountain took something from me. My nerve and my confidence. I found that I had regained a fear of exposure and heights that I developed when the kids were young but that I had worked hard to overcome. The fear I felt from last November had not completely gone and facing the prospect of coming up against these slopes again had me quite worried. Jumpy belly time and a few visits to the loo.
The ascent of A'Chralaig which took me 4 hours in November took just 2 hours. Then between that summit and the bealach before MFc which was a nightmare last year was like a pussy cat stroll this time round. Very, very different in drifting snow. I met some walkers on the way who said that the pinnacles had a 'bad step' on them. Oh jesus! I just about lost my nerve at this. But no, push on, it can't be that bad... 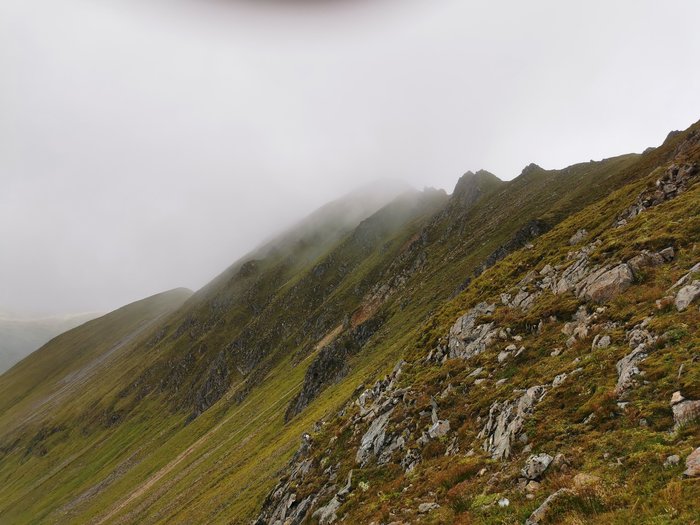 It was quite cloudy and I think I'm glad of that as I could not see what I was getting into. I kept my eyes firmly on the ground in front and was careful as it was wet. I came across what I reckoned was the bad step and apart from the exposure it was easy to climb. I thought that if that's all there was then I would be fine. And it was. Soon at the top, I saw a family there with a youngish child about 12. OMG, there was me practically having a breakdown and children were up here. Happy for a bit, I relished popping this one in the bag, number 184. Coming down was fine, but once more, I took what I thought to be extreme care. Three points of contact whenever there was any hint of difficult sections. Then off down the steep path which later turned boggy and onto the longish hike out.

All in all, I am not back to the same level of confidence I had last year, but in truth it has been a while and the fitness has suffered not being able to go to the gym or up a hill for quite some time. At least I'm back in the saddle though. I know there's been quite some talk in Trail magazine about how mountains are good for mental health - and I definitely subscribe to that view (and Trail) but this made me realise again how much of what we do is governed by our mental state. My fear of the hill had nearly paralysed my limbs. It's quite a sobering thought when taking a moment to reflect on the challenges that other people face that are not visible externally but which can be quite disabling. However, on a positive note; if the mind can be cause problems, then it can also do the reverse and serve you well, enabling you to achieve and overcome in places you never thought possible. That's my lesson for this walk.

Back in the camper van I was sound asleep by 9:30pm.

Re: The one that didn't get away

I definitely subscribe to mountains being good for mental health, or at least excercise in general and I know being out in the hills again is doing wonders for me.

It's also amazing how fear can impact our lives and how our perception of risk changes on a day to day basis, it's no doubt been hightened by these Covid times, when before we quite happily accepted similar risks or more in our every day lives without batting an eyelid.

I was here a couple of weeks back and just completely bypassed the pinacles there as I wasn't prepared for them but looking at my scramble book it says there's one single bit that's grade 2 and the rest is easy - so nothing I've not done before previously. This week though I was at Beinn a'Bheithir and I went the alternative ridge which involves a grade 1 scramble and I was very aprehensive about it on the approach, but stood at the bottom and looking up there's plenty of holds and steps so made short work of it and was feeling very accomplished with it.

It's good to get the confidence, but not to get too confident!