And, so it came to day 2 - Liathach. The Beast of Torridon, some say

It was a torrid night the day before, but if I thought a few birra's from Bob and drams of Lawrence's Highland Park were gonna ease my anxieties, I was about to be proved wrong!

The lads were all up bright and early, thanks to our intense preparation and self discipline the night before

After an interesting array of breakfast's were consumed, the cavalcade of cars set off for Glen Torridon, full of anticipation, or something like that! Forecast was looking a bit cloudy, but hopefully would open up later in the day. Initially overshot our start point for heading east to west - Glen Cottage is actually the cottage in the glen

A better way to describe it, would be the cottage in the tree's, but hey ho.

Perhaps, Big Jasper found it all très amusing as he immediately bolted from the car, doubled up in laughter, or maybe it was a touch of altitude nausea, but nevertheless, he was soon all kitted up and heading for the steep, misty climb with the rest of the lads. 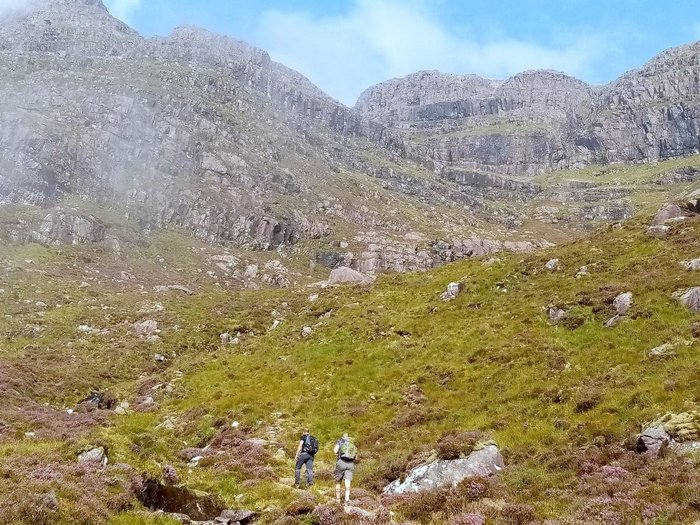 Coire Toll a' Meitheach, on the way up. Look back down to start point.

We made decent progress up the side of the Allt an Doire Ghairbh, despite the rather warm, airless conditions, which were to the liking of the midges, but not poor Lawrence

Lawrence, is a great guy to have along with you, particularly when the midges are bad. They just love him and leave everyone else in peace

Notwithstanding the fluids taken the previous evening, many re-hydration stops were required, as we enjoyed the various scrambly bits on our way up to the bealach above, corrie Toll a' Meitheach. The beast begins to show its muscle! 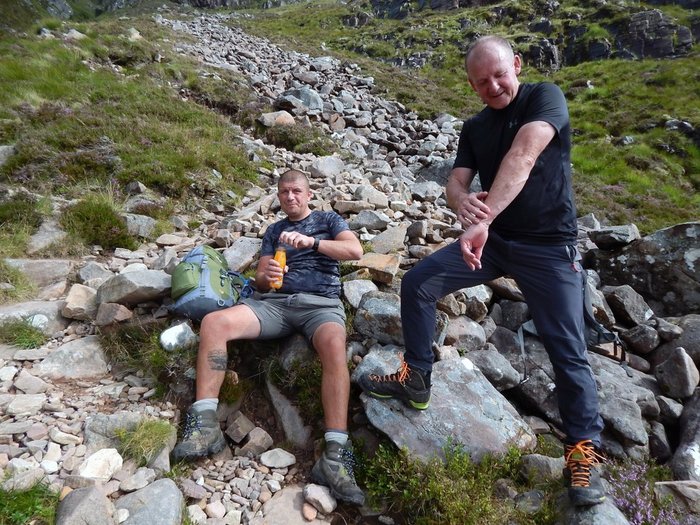 Gaspin'! Meanwhile, Lawrence acts as the decoy for the midges :)

By now the mist was beginning to thin, hinting of greater things to come. I had made good progress on the ascent and reaching the bealach with Lawrence, decided to make for Stuc a' Choire Dhubh Bhig, for the promised great views of the ridge. Alas, the fog returned and made it clear I was wasting my much needed energy, so halfway there was as far as I ventured. 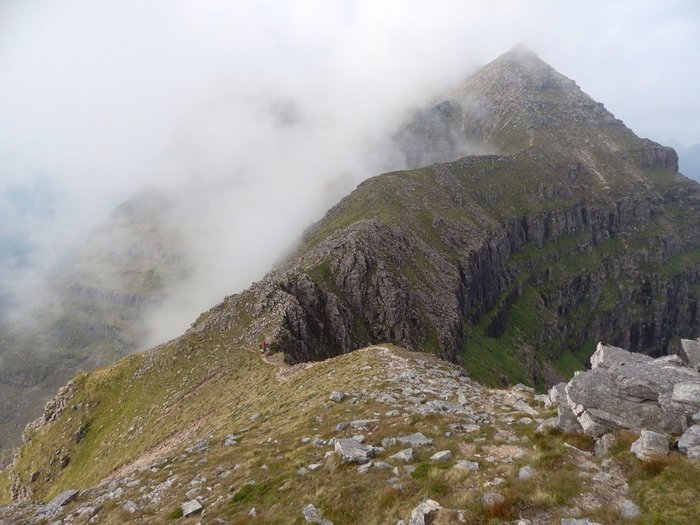 Making my way back down to the bealach where the lads were waiting, as there was to be no great view along the ridge.

Not only that, but the views to Beinn Eighe and other mountains on the north side of the ridge were also excluded, so we didn't hang around much before heading for Spidean a'Choire Leith, 1055m, along the rocky, well worn track. After a couple of intervening tops, we were soon clambering our way over the big boulders onto the summit, only to be met by another plague of wee beastie's, just waiting for Lawrence

Flying ant's, this time! Like the midgies, they homed in on him and kindly left me in relative peace

Again, the mist was pretty thick, so any glimpse's of a view was as good as we got. 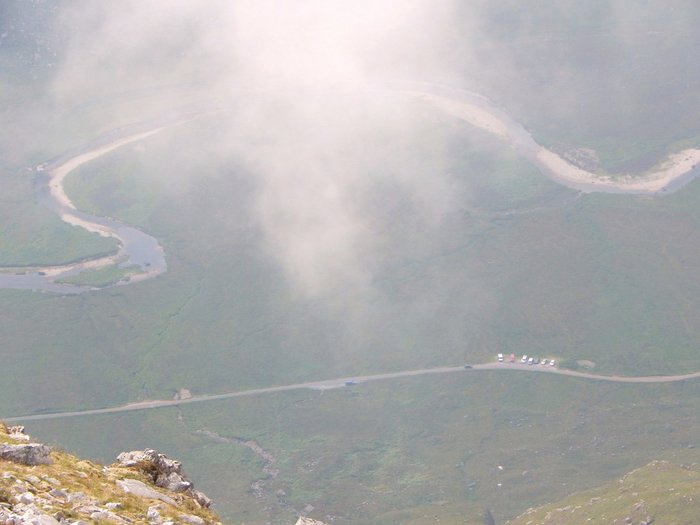 Not quite looking directly down on the roof, but no' far off it. 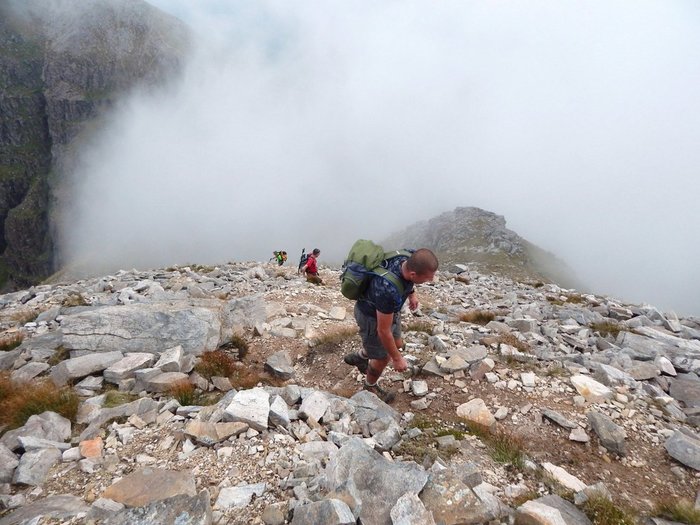 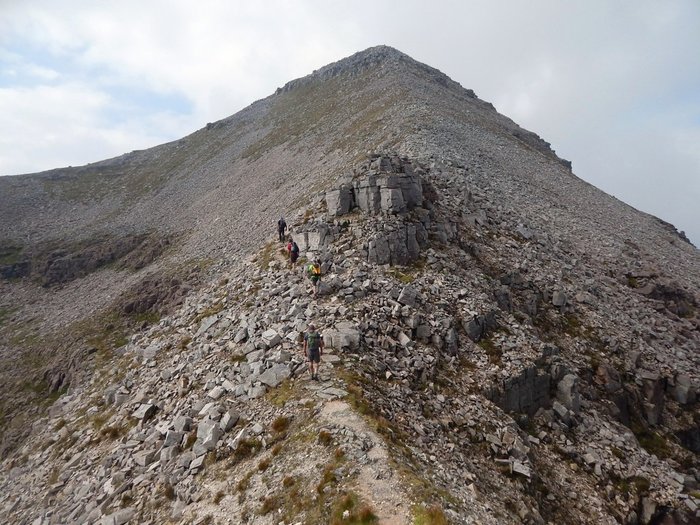 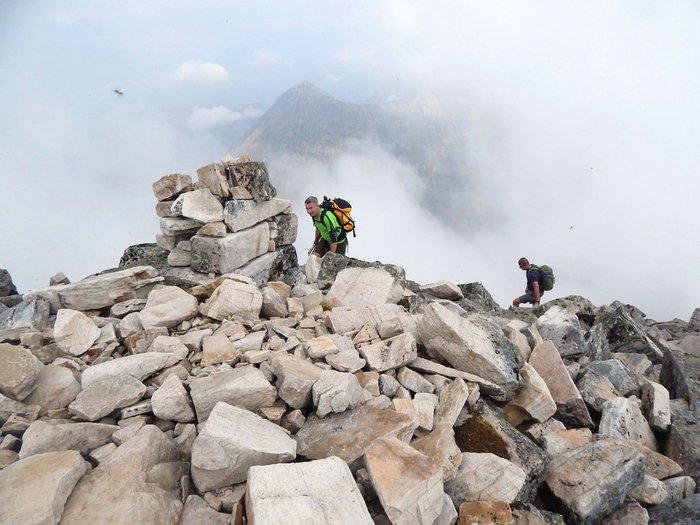 Andrew, makes it to the summit, as the Flying Ant's eagerly wait for Lawrence :) 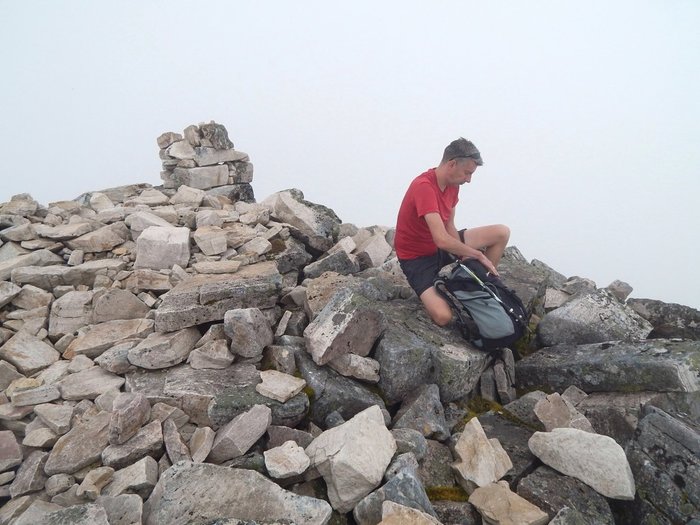 Now the time for the serious stuff was upon us. Lawrence, bravely took on the role of lead off the 1st Munro, taking care to heid the advice on WH's - avoid following the ridge which heads SSE, or descending towards crags above Coire na Caime! The true route heads briefly south, then southwest down a steep slope of massive boulders to reach a narrow bealach. Despite the fog, I could sense an increasingly precipitous drop below us to our right and an equal increase in my heart rate and strength. Lawrence, perhaps senseless from the night before strode on regardless, round to the narrow bealach, with the Am Fasarinen pinnacles now lying in wait, somewhere before us. Cue the sound track to Jaws, Psycho, or something like that

I seem to remember a few relatively easy, enjoyable even, scrambly bits, gaily folowing next in line and then ..... eeeek!

Andrew, was already on the other side of this narrow ridge of rock, about 15 feet long. I don't remember much of it, but seemed like a massive drop to the south and a never ending, vertical drop to the north. I am never going to get across that! Big Jasper, meanwhile had shunted across it cowboy style. Quite appropriate really

Nope, not me! Lawrence, however was walking along a narrow ridge on the north side, maybe about 4 inches wide, clasping onto the top of the rock, as he edged his way along, before clambering back on top.

Jeezo, what to do? If I had any sense, I would have back-tracked, but I felt all routes of escape were cut off, especially as the others had all raced across

Least worst option, the Lawrence Method was chosen and somehow, I managed to keep myself moving, without looking at my feet, or anything for that matter, before nervously pulling myself back to the safety of the more substantial pinnacle top. Relief! 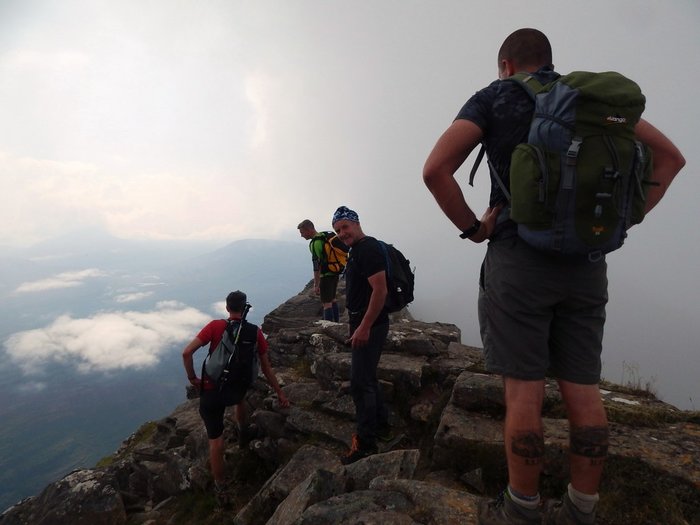 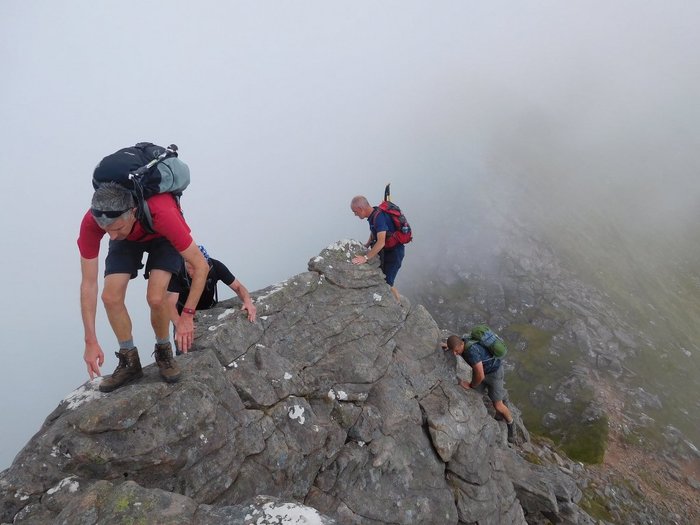 Definitely the scariest part of the day! Thankfully does not show the half of it. Big Jasper dismounts after crossing à cheval, Lawrence clings on to the north side, I sense danger, while Bob batters on oblivious and unconcerned. Photo courtesy of Andrew Gilthorpe, the only one who could hold a camera at the time, never mind operate it :) 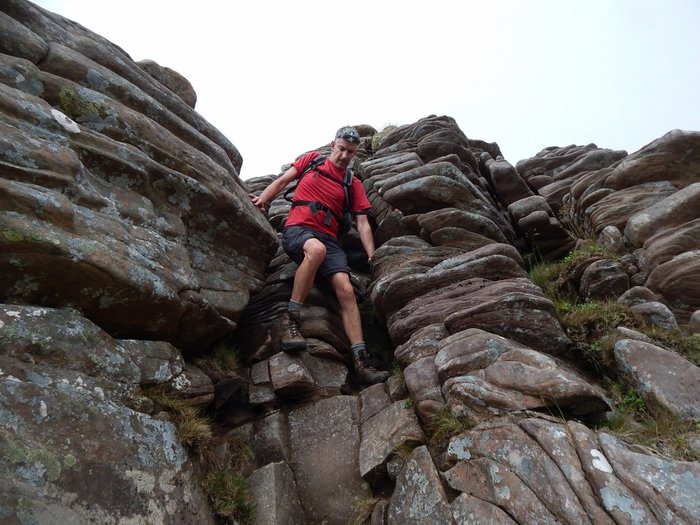 Time to get down outta here! 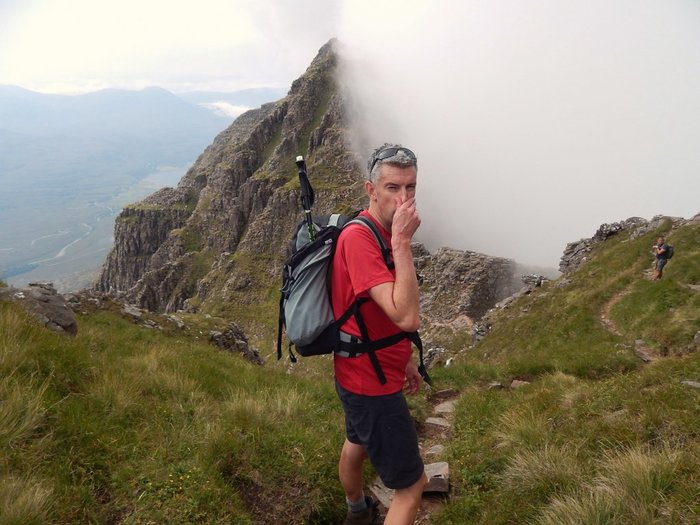 I think this was soon after the terror moment :)

Did a few more scrambly bits after that, but not many. Me and Big Jasper, preferring to keep to bypasses and leave the easy stuff to Andrew, Lawrence and the newly rejuvinated, Bob who had come to life, once the scary stuff started

Gradually the mist was beginning to clear, treating us to some great views down spectacular gullies, or to neighbouring hills. By this time, we, me and Jaf, had come to realise that by-pass, means neither easy, nor safe, often having to lean into the mountain for extra balance and security, beware of the wet bits and reach across bits where the path is no more. 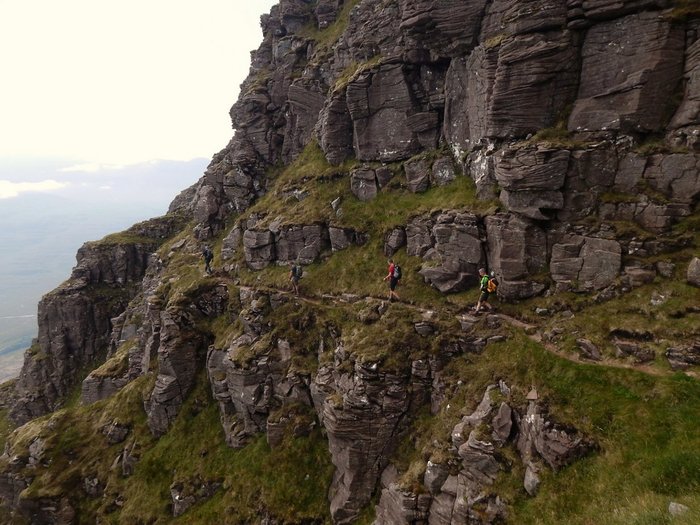 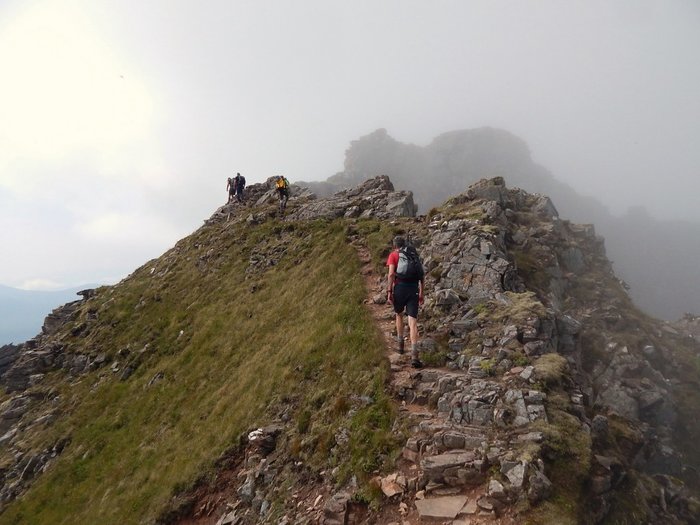 Making our way along the ridge. 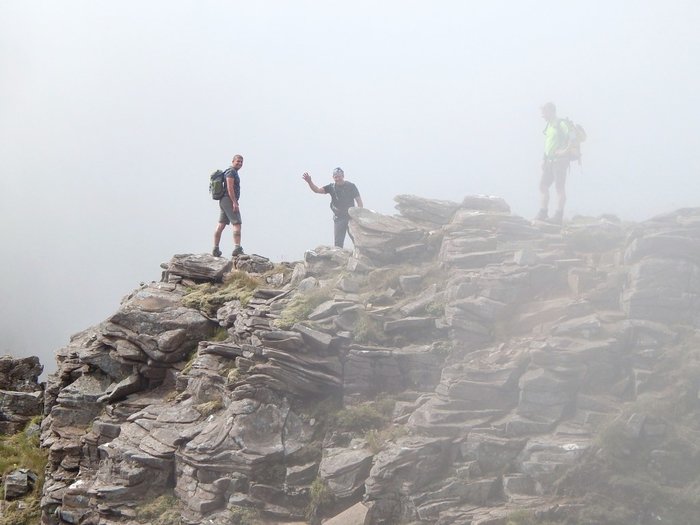 Now you see them, now you don't.

Eventually, we finally got off the last big bypass, onto what I would call solid ground. I had to say, I had not enjoyed much of that experience and it made me severely doubt whether I will reach the magical total of 282 Munro's

Also, realised I had now sussed out how to comprehend the Gaelic as the meaning of "Am Fasarinen," hit me – “am fair ceichin’ maself!” Think this was maybe on the main bypass?

The trek out to the second Munro, Mullach an Rathain, was howver a joy, as the sun began to appear and the mist began to disappear, revealing sensational views back along the ridge, Beinn Eighe, Alligan, Northern Pinnacles, Loch Torridon and great mountains to the south. By now we were meeting several others heading off in the opposite direction, poor souls, or would it be better saving that scary bit for the far end of the ridge? I'm not sure I shall return to find out 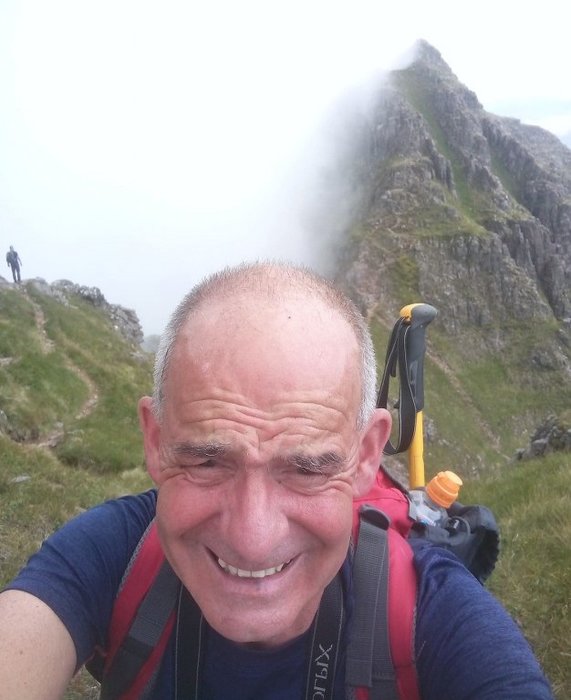 Ol' Jimbo, suffering,but glad to be in one piece. 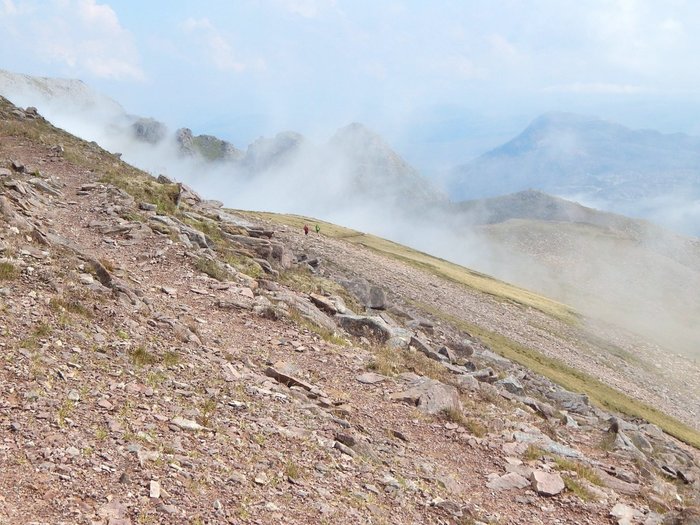 Big Jesper and Andrew, leave the ridge and head for Munro #2, Mullach an Rathain. 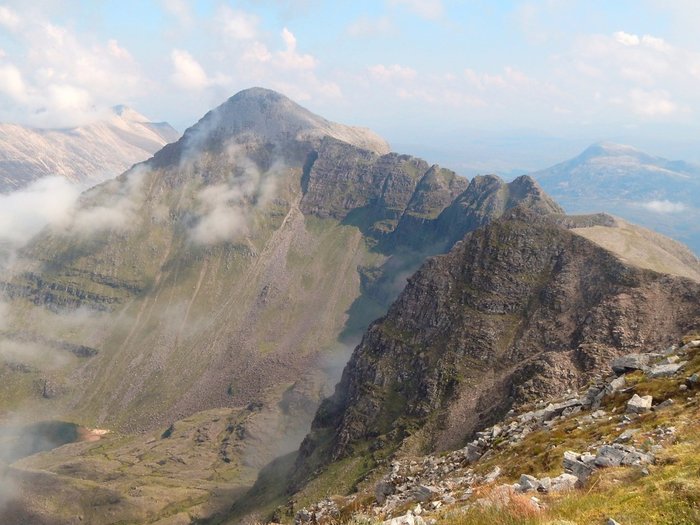 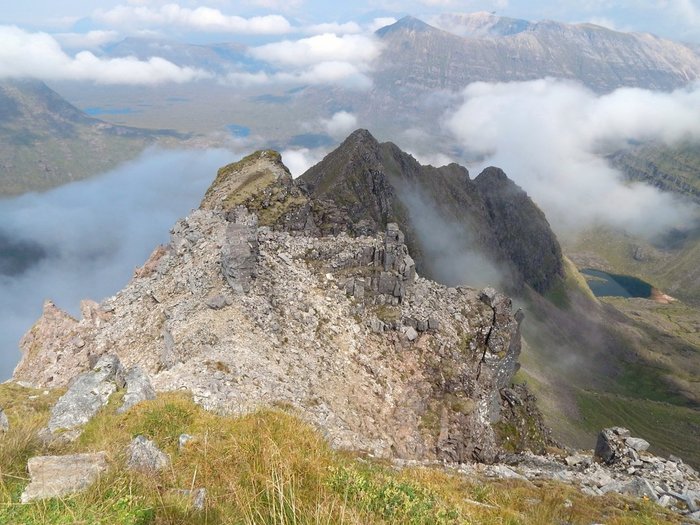 Northern pinnacles across to Beinn Eighe. 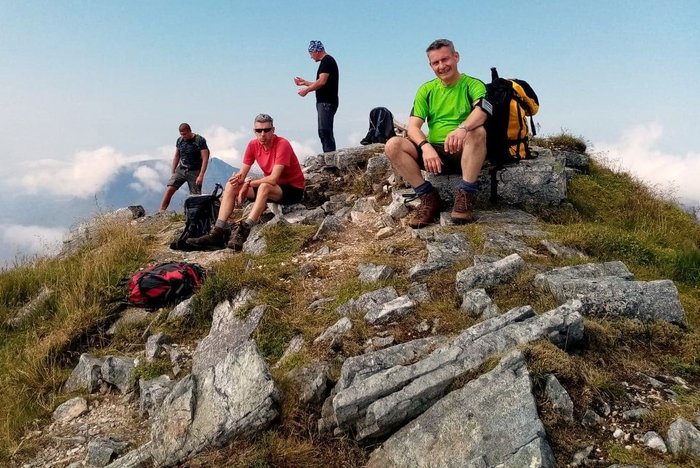 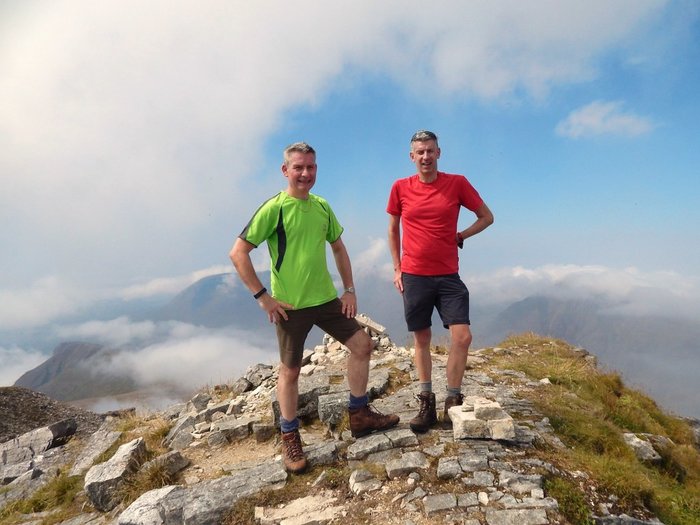 Oh, how we enjoyed the banter as we gorged on sandwiches, gulped the last of our remaining fluids and absorbed the pure magnificence and majesty of our surroundings. Or, just call it relief, on my part at least. Bob and Lawrence, then made for the track down first. I suspect the Birra machina was calling

As described, the steep, scree descent by the side of the Allt an Tuill Bhain, is no dawdle either. That said, how I enjoyed a wonderful drink and dowsing my now near on fire scalp,in the cool uisge. 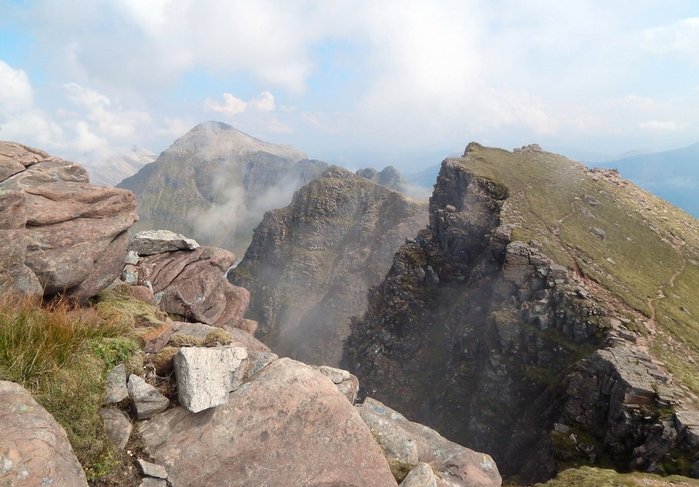 Looking back over Am Fasarinen. 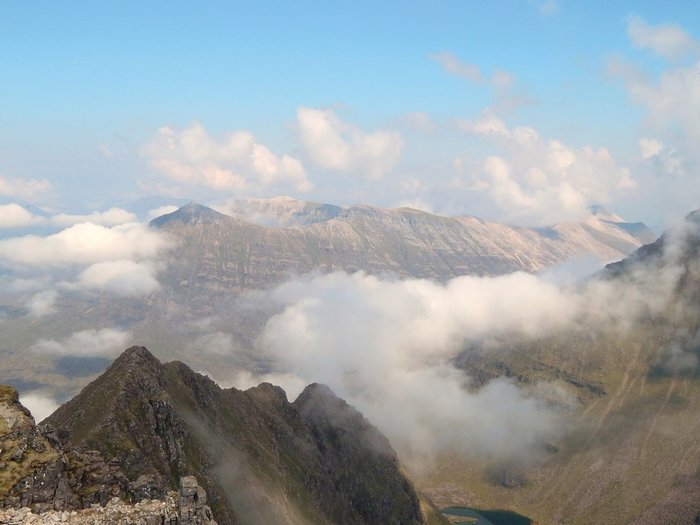 Another look at Beinn Eighe. 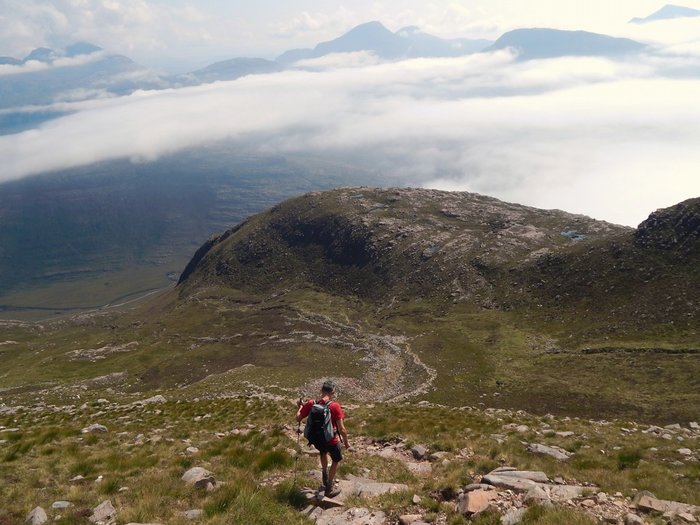 Big Jasper makes his way down. Achnashellach hills in the distance.

Gradually the path improves, although there's a few more wee surprise scrambles to come, but nothing like before. The end of the path led us onto boggy stuff, where Lawrence divulged he had taken a heider, face first into the bog. Alas, we missed that special moment

Having parked at the other end, we were faced with the trek back along Glen Torridon, gazing up at the pinnacles, while trying to dodge the wing mirrors of massive motorhomes, heading along the glen. They're huge, bigger than my ears - the wing mirrors! I think it must be about a mile and a half, or so which we could have avoided, having two cars but we were quite happy making the circuit in six and a half hours and still in one piece. Back to Ledgowan, chaps. The birra machina awaits! 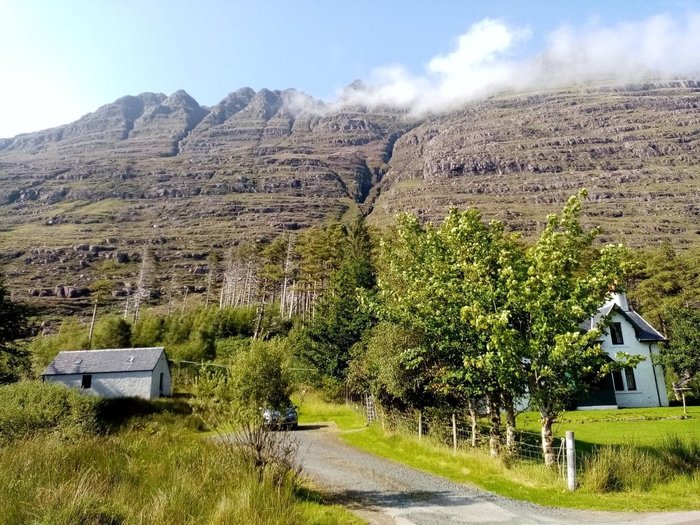 A longing look back up to the pinnacles above Glen Cottage.

We gradually got showered and refreshed, before enjoying another great meal and a few beers, before retiring for the night. Aye right! There was still time to finish the last of the malt, Moretti and chew the cud till the bell struck twelve, enjoying the great company. By this time, I was thinking Liathach is a dawdle, what’s next?

The rest of the troops decided to head home the next day, but I had high hopes the weather would hold and I could do some hills down at Achnashellach, but that as they say, is another stor

well done you.
I did the Liathach ridge twice, in my youth! Before I learnt to be feart. I'd love to do it again but I don't think Rudolph is so keen!

A brilliant trip away and great craik. Great report and pictures Jimbo

mrssanta wrote:well done you.
I did the Liathach ridge twice, in my youth! Before I learnt to be feart. I'd love to do it again but I don't think Rudolph is so keen!

Thanks, Mrs Claus. I wish I had been into this lark in my younger days. I definitely had a better head for heights then. I'm sure you can talk Rudolph into having another fun day on the ridge

Cheers, Jasper! You said it. One to remember. Up there with the best of them