Fell of Fleet - with a bang!

Fell of Fleet - with a bang!

Sub 2000' hills included on this walk: Fell of Fleet


It was a dreich day as I drove south from Edinburgh in search of the better weather predicted by the Met Office for Galloway. That part did turn out well and I found a fine sunny day with only light breezes. Most of the rest didn't go quite to plan. The first delay was finding the A702 closed at Elvanfoot with the diversion adding another half hour to my journey. Then just before reaching my parking spot below the Clatteringshaws dam I found the next part of the A712 was being resurfaced, a convoy system was in operation, and I had to wait for the next one before I could drive the last 100m to the forest road on the other side of the River Dee.

The start of my route plus a wee digression! Parking for Fell of Fleet

I had read reports of walkers driving down this for about 4km before starting their walk, but a 'NO UNAUTHORISED VEHICLE ACCESS' sign confirmed my decision to start from beside the A712. There was also an open gate that would be embarrassing to find locked on my return if I'd driven through it! Fife Flyer had seen that being installed in early January and I had reread his useful report to remind me of what might be in store for me. With all that it was approaching noon by the time I'd extracted my bike from the back of the car and reattached the front wheel remembering this time to reconnect the brake. On its first outing since last April the bike took a while to tame and as I whizzed past a junction I did wonder if I should look at the map. Being incapable of keeping the bike under control and simultaneously reading the map I didn't. Several hundred metres of downhill later I realised I should be gaining and not losing altitude. Five minutes and a U-turn later I was back on the more uphill route and being overtaken by lycra-clad bikers speeding on their way to, I guess, Gatehouse of Fleet Some four kilometres south of my start point I arrived where the 1:25,000 map shows a track heading uphill towards Fell of Fleet. Despite walking back and forth a couple of times I saw no sign of it. I had read that it was hard to find and a later closer study of aerial views leads me to conclude they were years old and the track is now overgrown

The main part of my route

. I left the bike behind some trees and headed uphill through a felled area instead. This was now well stocked with what appeared to be self-seeded new growth. 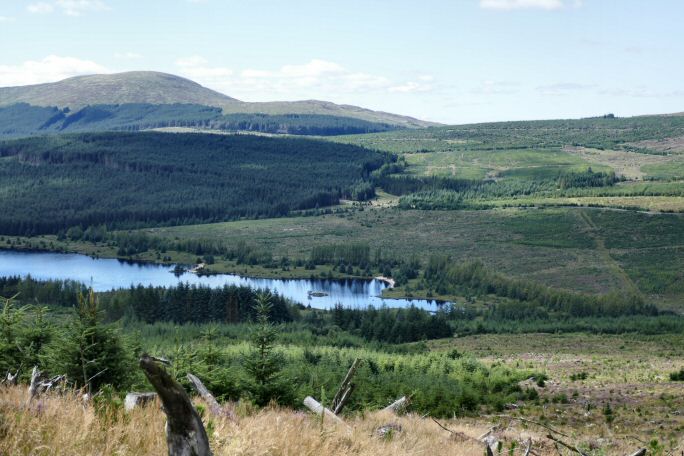 View of Loch Grannoch and Craignelder from the felled area 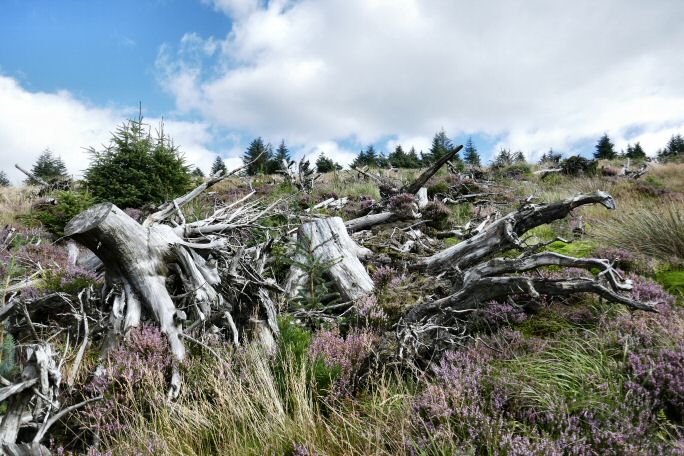 Uphill view of the obstacle course

I might not have had to fight through intermeshed branches, but with stumps, brashings, and watery pits every step had to be carefully placed until I exited the ex-forest 150m higher. During the climb I had expected to cross a track clearly shown on Bing Maps aerial view, but found only an overgrown scar across the hillside. I guess the Bing view is years old. The Google Maps equivalent is probably more recent, but still gives an optimistic picture of the track. Once on the open hillside progress was faster across a mixture of low grade tussocks and bog to the final stretch up to the summit cairn. Visibility was good as I tried to identify the surrounding hills – from Criffel just south of east round to Meikle Millyea to the NNW and Cairnsmore of Fleet in the ESE with the other two Cairnsmores also visible on the way round. 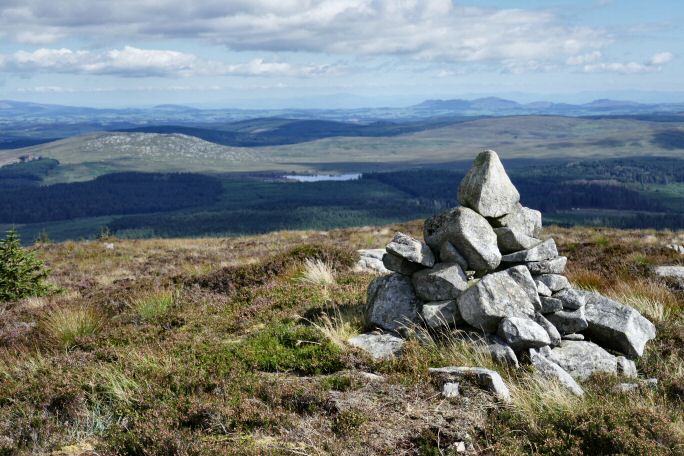 Cairnsmore or Black Craig of Dee Photos were taken and texts transmitted as I ate my sparse lunch and eyed my rapidly emptying water bottle. That wasn’t helped when I manage to knock it over and spill half of what remained. It ran out as on the way down and I regretted not bringing more or having a reserve supply in the car. Resolving to find a better route back to the forest road I headed for a firebreak marked on the 1:25,000 map. 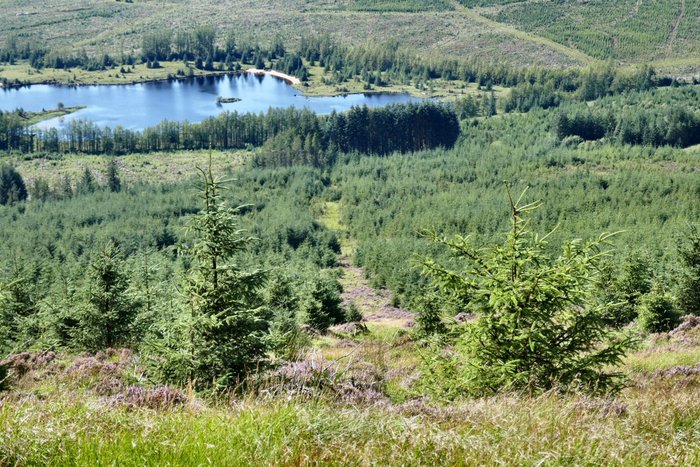 The firebreak and Loch Grannoch

It did still exist and looking down at it from above it appeared clear almost as far as the road. From my earlier failure to find the track I knew that the firebreak didn't reach the track either, but I set off down hoping there was only a narrow screen of trees to pentrate to reach the track. When I entered the firebreak I did find what might be a path which provided better footing, but it was obscured by long grass and other overhanging growth. With hidden trip hazards it had to be taken slowly. As I neared the track a maze of young trees needed to be solved then with 40m to go their older brethren encouraged me to the right then downhill again to finally break through a screen of entangled branches to arrive back on the track about 200m south of where I’d left my bike. I recovered it and set of looking forward to freewheeling most of the 4km back to the car. This did go to plan - for a while. About one mile from the car as I sped along there was a loud bang and my front tyre deflated. I had replaced the tube when it started leaking last year so whether it had been faulty or I’d damaged it when I’d fitted it the result was the same: I had to push the bike the final mile.. I now need to buy a new tyre as well. I suspect I 'd have been up and down Fell of Fleet from the car faster without the bike. Next time I'll take a spare inner tube and an air pump.

Back at the car I found the roadworks had gone and traffic was flowing as normal. From there the return drive via Wanlockhead was trouble-free. So while the day had more than a few frustrations I had achieved my main objective and enjoyed a fine sunny and reasonably warm day as well.