Yeah, I know - ANOTHER Fitty Hill walk report, but to be fair this includes much of the excellent Westside walk and some of Westray that tourists never see.

We started from home which is near the crossroads startpoint on the map where there is a layby next to the postbox or the island bus service from the ferry terminal will stop there (ask for Skello crossroads). Walking down the road, we detoured down to the beach and around Branstane, coming up onto a stone track at the back of the farm. Leaving the beach to join the track behind Branstane Farm

The next bit of the walk involved a delightful stroll along the sands and rocks of Sandsend and Tuquoy Bay, coming out on the road by Roadmire. There's plenty of wildlife to see along this stretch, especially in early summer. Walking along the shore of Tuquoy Bay

We followed the road up to the junction by the old Westside school and a house known locally as Parliament because it is where the local lads used to gather at the weekend to compare cars and bikes and exchange news.

A few hundred yards towards the village there's a lane signposted for Fitty Hill and the climb could hardly have been simpler - although it is a sharp, steep 20-25 minutes to the top. Path uphill is fenced off This is why the path is fenced off Relaxing at the top of Fitty Hill, Noup Head in the distance.

The way down was just as simple - although it can be a bit damp and rough in the winter - and we linked up with the Westside path by the cliffs. Many of the birds had already gone, but there were still a few puffins and guillemots about.

Heading north, we had vague intentions to carry on to Noup Head, but once we had met my wife below the small car park at Backarass, had a picnic lunch and a lounge around in the sun, we decided the lighthouse could wait for another day. The way down over the Bloody Tuaks - fine in summer, but a squelchy mess in winter Peering over the edge at Hooro Nev 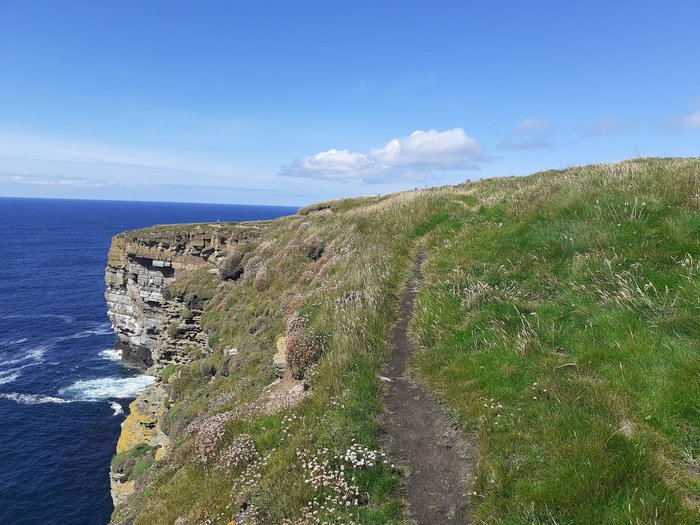 The path is often close to the edge Looking south along the cliffs towards Rousay One of several natural arches along the Westside walk 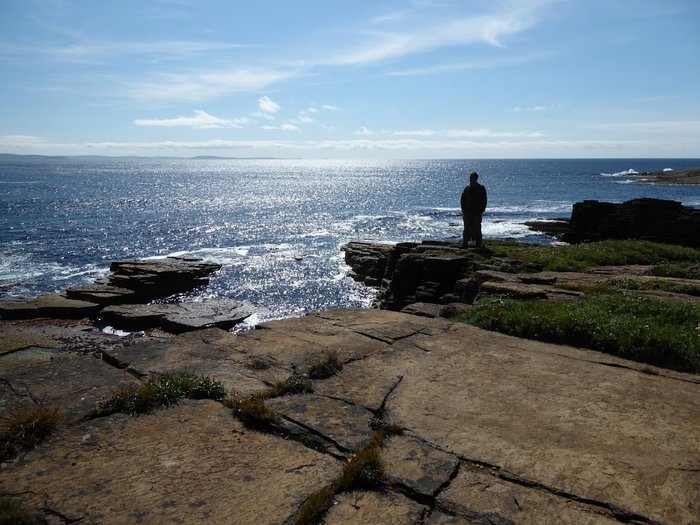 From Backarass it's about two miles to the centre of Pierowall where you can catch the bus back to the ferry from the hotel car park.