With various weather forecasts a bit middling, MWIS predicting just a 30% chance of cloud free summits
at most of my practical choices, I decided to put into action a plan I've been thinking about for a couple of years but haven't managed to get around to, Beinn na Lap. Yes, I know this is one of the easier Munros due to the high starting point, but for me, it has it's plus points. Firstly there was the enjoyable difference of getting to the start point. I just liked the idea of taking the car to Tyndrum or Bridge of Orchy and then a train journey through wonderful scenery to get to the highest, most remote train station in the UK, Corrour. I have passed through the station once before, seen it often on TV and videos, but have long wished to be getting off the train and doing some exploring, if only for a few hours. It's such a unique place. Also the navigation appears relatively simple, the walk reasonably short, so even if the weather did turn out a bit "yeuch", it hopefully wouldn't be such an issue.
So, not being a regular train user, on Friday night, I got online and got return tickets for myself and my grandson Matthew from Bridge of Orchy to Corrour. Not being certain of the situation at BofO station, I opted to go to my local station to print them off. I wanted to know I had the tickets in my possession with no hiccups at BofO. (little aside, no one checked our ticket in either direction

)
The train did not depart BofO till approx 10.50am so an early start wasn't essential. Got to BofO before 10.30am and parked by the hotel and made our way uphill to the station where one other person (an angler) was waiting.The train arrived on time and Matthew and I donned our masks to board what I would estimate to be a less than 50% filled train. 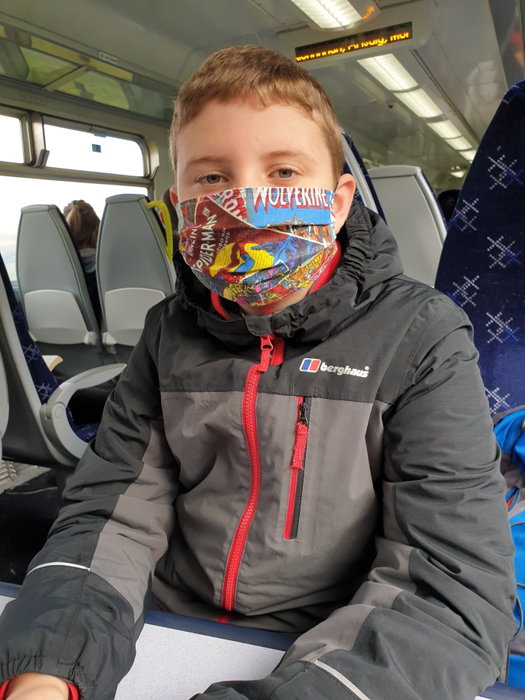 Who'd have thought a year ago?

A pleasant 30mins journey followed admiring the scenery and trying to spot deer through windows which a little concerningly were being splattered by rain. Looking at the hills, some summits were clear, while others were shrouded in cloud, more so to the west of the line. There is one intermediate stop (Rannoch) between our two stations and we arrived at a fortunately dry Corrour at 11.20am. 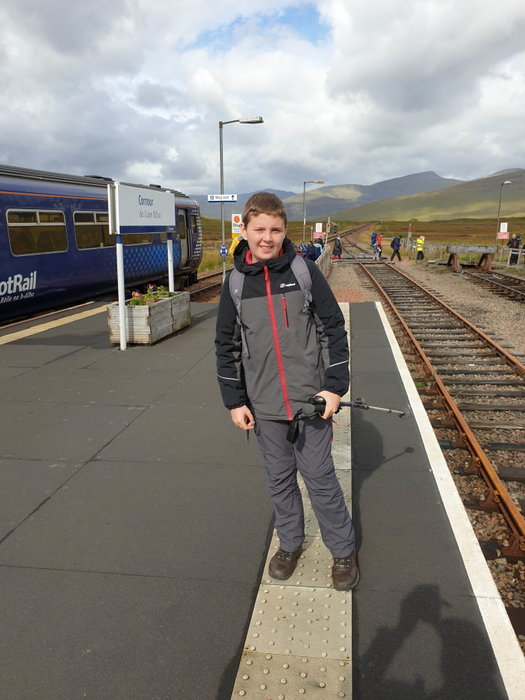 Another unique thing about this walk is that, in general, everyone who is climbing Beinn na Lap is starting off at virtually the same time. Stepping of the train there was us, a couple, a trio and a larger group of around ten people and I think that was about it. Another couple of gents headed off in the other direction, I guessed, and later had confirmed, to tackle the Corbett Leum Uilleim (which just by looking at it, is probably the better walk 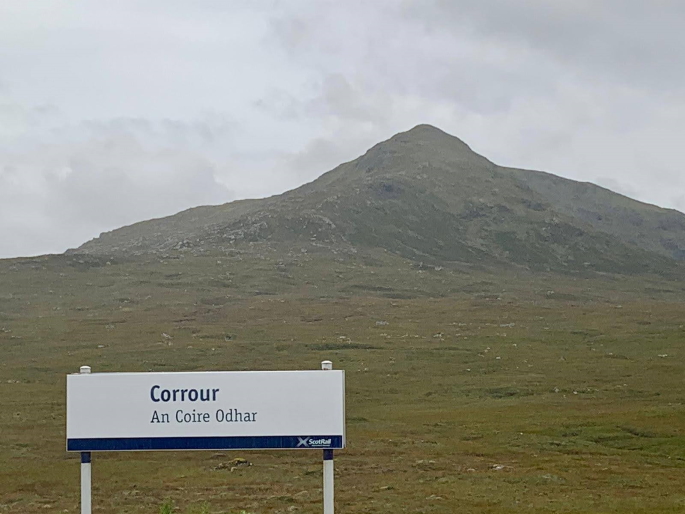 The walk begins on a track towards Loch Ossian. 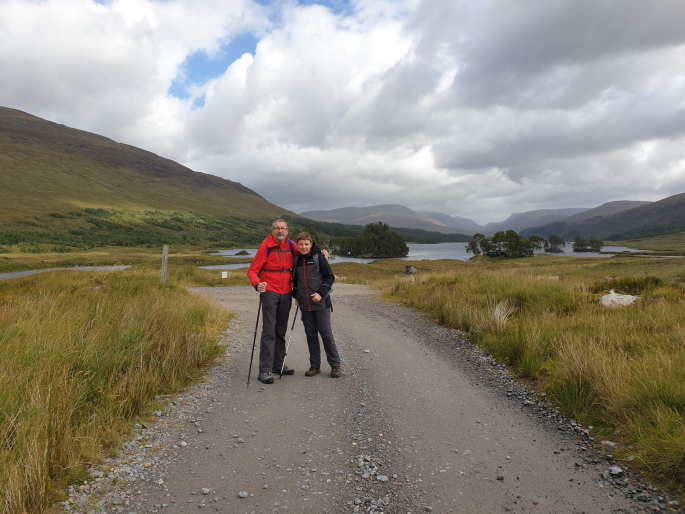 Before the hard work.

After swerving round the bottom of the loch, a path then cuts off onto the hill for a straight up, extremely boggy ascent onto the summit ridge. 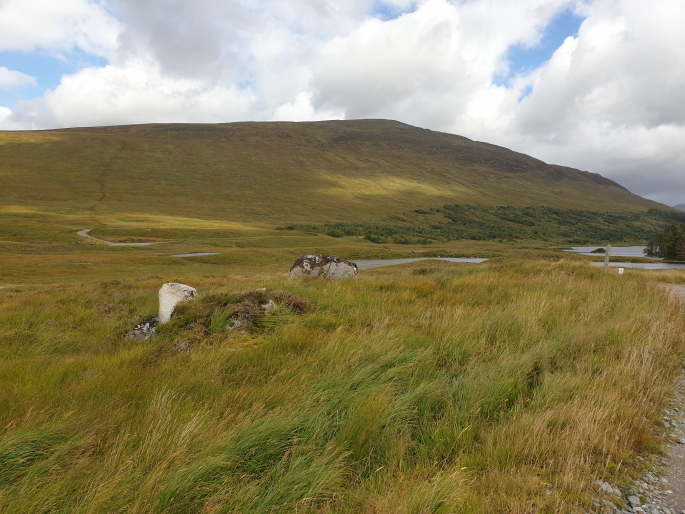 Chats took place between our groups as we made our way up the hillside. 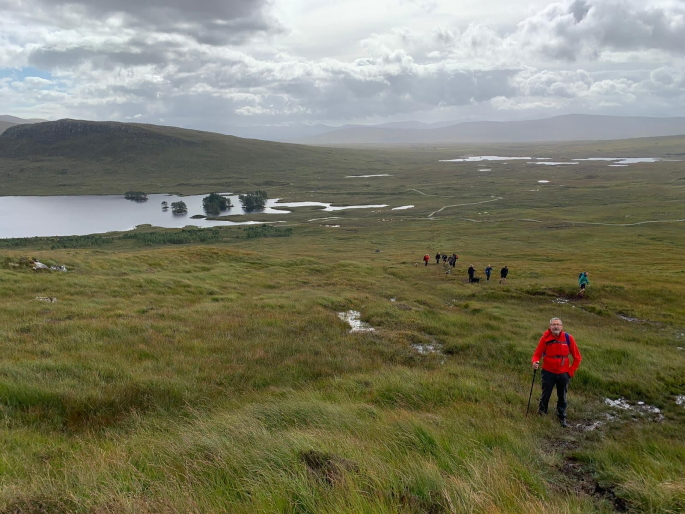 Me being quickly caught up. 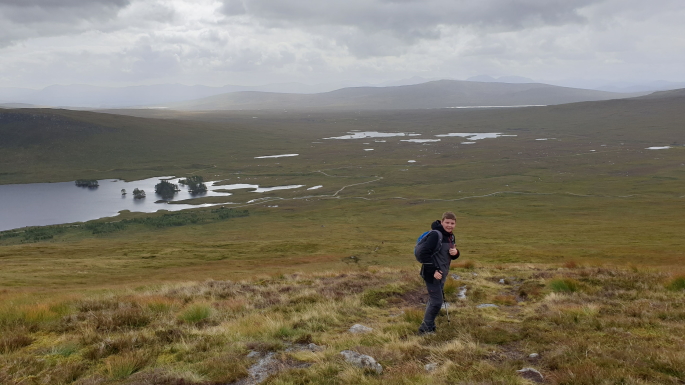 This walk ISN'T the most inspiring but is made worth it by the ever improving views as height is gained. Loch Ossian, over Rannoch Moor to Schiehallion, down the glen towards Ben Alder, in fact large hills 360 degrees.

About half way up our ascent to the ridge, Matthew gave a shout and I turned to see what I think was an RAF C17 plane fly up and over the railway line below. 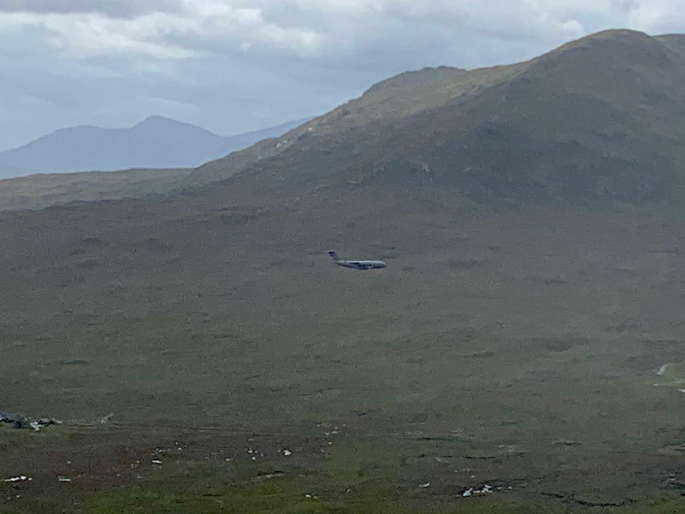 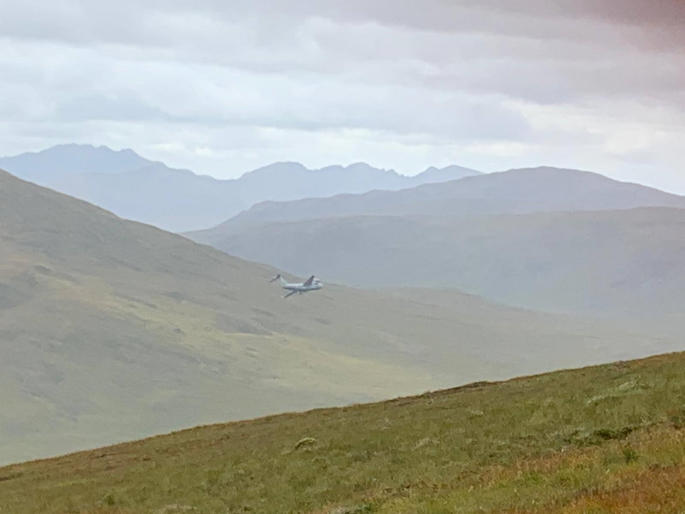 We were taking our time and were last to reach the summit ridge where the ground underfoot improved a good deal.

On the summit ridge now.

In fact we met others descending already as we approached the summit. It was at this point we were told that one of the larger group was doing his final Munro so Beinn na Lap was his compleation hill

. We reached the summit and I did a little exploring while Matthew ate some rations. It was Matthew's 41st Munro. 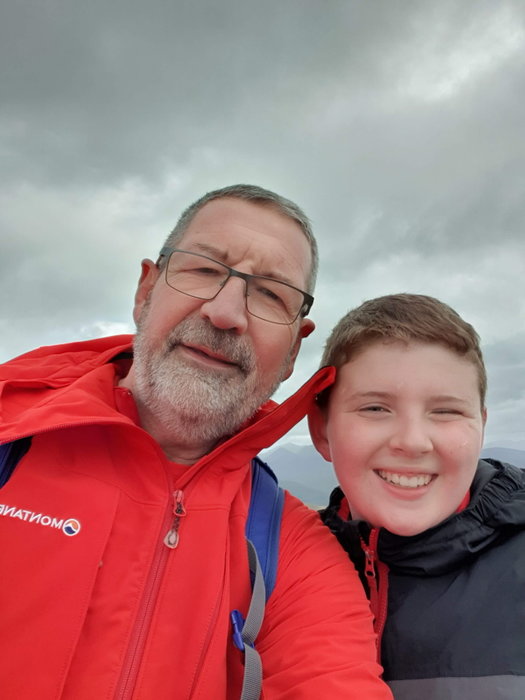 I returned to the summit ready to have some of my goodies just as I noticed that one of the few visible squalls seemed to be heading in our direction. 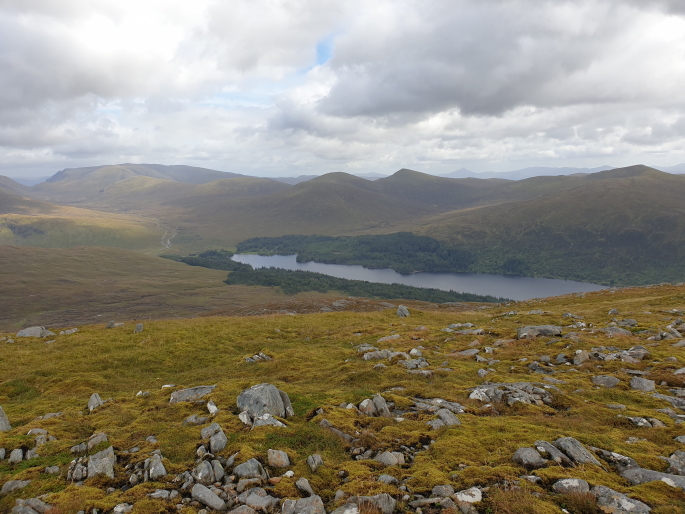 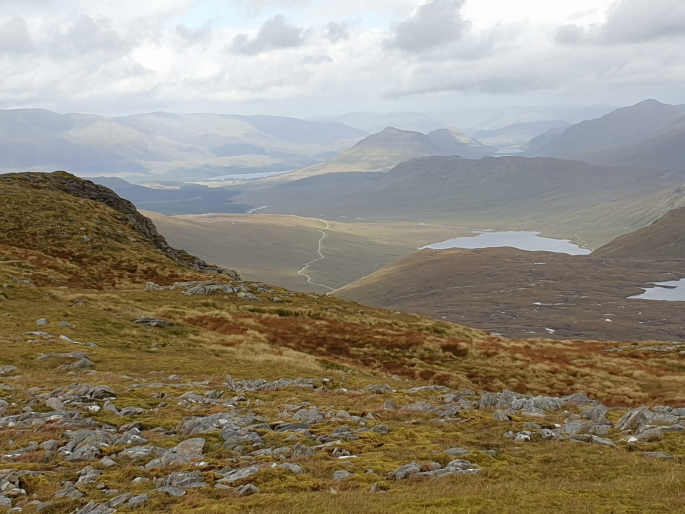 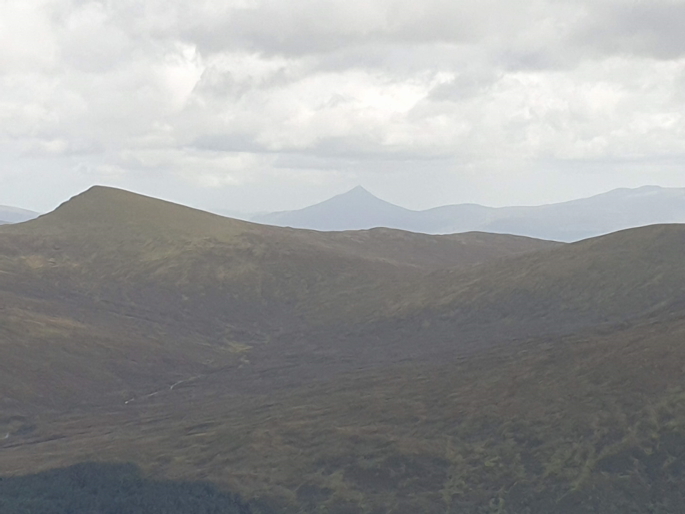 I stuffed down a packet of crisps and shoved a snickers bar in my pocket for earliest possible consumption and we quickly repacked our rucksacks and headed away from the summit shelter just as it hit us and for 15/20 mins it got quite gnarly, but it eventually passed over and in general the weather was reasonably benign for us for most of the day. We made our way down of the ridge and spotted that many of our fellow walkers were almost back at the vehicle track already, but as I had already calculated our approximate arrival time back at the station and knew we would have quite some time to kill, we didn't rush. 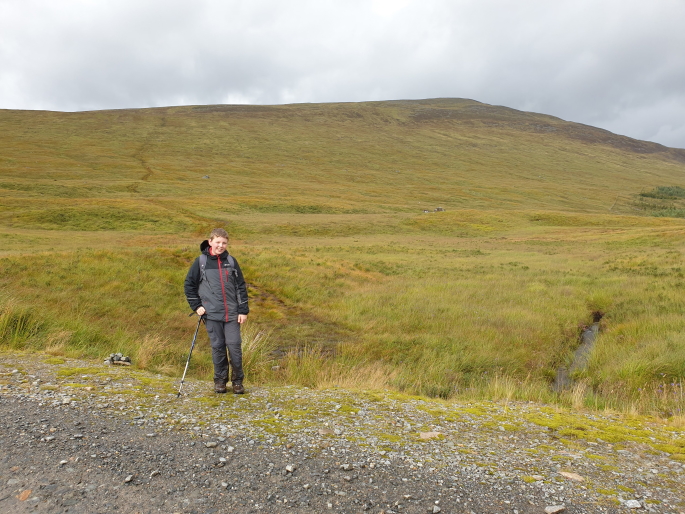 Back on solid ground. 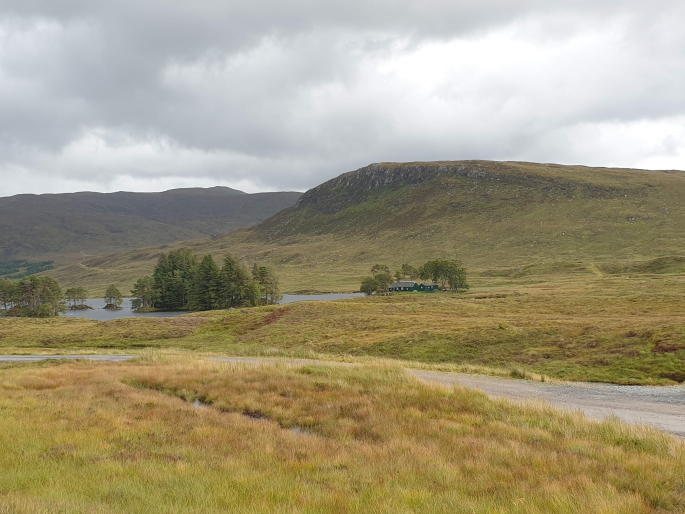 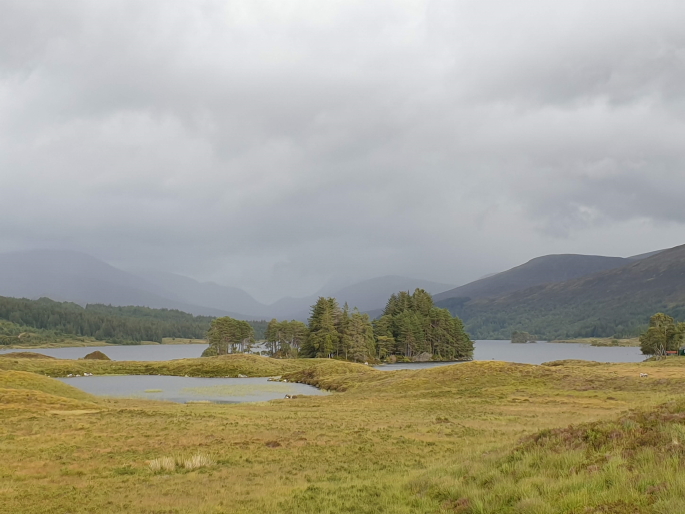 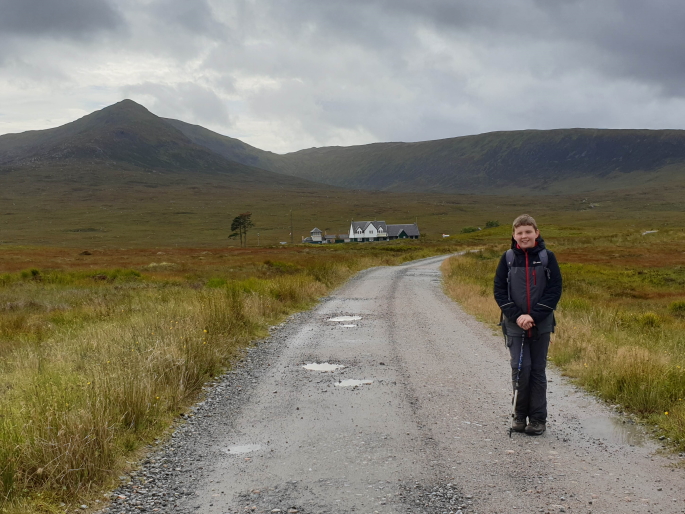 
We eventually made it back to the station around 15.45 which would leave us around 2 3/4 hr to wait for the train south at 18.25. What to do? Initially we went to the platform shelter intending to eat some more of our rations, but Matthew subtly suggested we should go in to the cafe and get something "proper to eat. I knew we were unlikely to get home before 20.30 that evening so i also knew that I would have to feed him at some point, but that usually took the form of a McDonalds or a fish supper, either on the journey home or when we arrived home, depending on the time. Besides that, it was only 4pm and I certainly wasn't particularly hungry. But Matthew persisted, so we crossed the track again, donned our masks, and entered the cafe. A quick glance round revealed all the seats were taken apart from a large one in the centre of the room with a prominent "RESERVED" sign on it. One of the guys behind the small bar came up and I mentioned something about looking for food and he informed us that food wasn't served till 5pm, but it was agreed we could sit at the large table, for the time being and I would have a coffee. Matthew, a tad young for a beer and not a fan of any fizzy drinks, or tea and coffee, could have nothing, but the bar guy, when asked, said it was OK for him to eat the snacks in his rucksack. 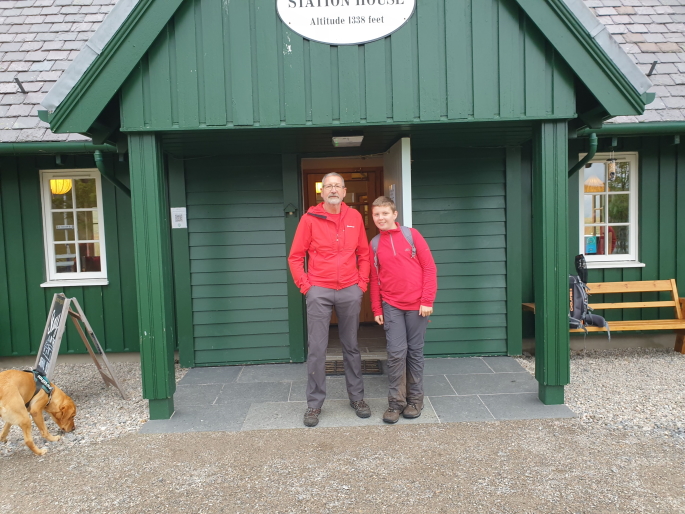 Me and Matthew at the Station House.

After a short time a couple (the only ones in the cafe we didn't see hiking) got up and left a small table by a window (also with a reserved sign on it), so we moved there, where I drank my coffee and Matthew was content to have connected to the cafe wi-fi

.
And then came the part of the day that Matthew liked best. Everyone who was In the cafe were the people we had got off the train with and had climbed Beinn na Lap alongside (well nearly

). I think Matthew felt there was a communal feeling of having shared the same experience. It isn't normal to have have the people begin and end a hill and then all be together. The large gang had bagged the other large table near the bar and a merry "compleation" party was beginning.
The only exception were two older chaps who had nabbed the comfy chairs beside the fire and they were the lads who had taken on the Corbett, Leum Uilliem. We were soon in conversation with them (both long time compleaters), listening to their hill experiences and Matthew telling them his.
Shortly before 5pm, Matthew hinted that food would soon be served and on finding out that our "reserved" table wouldn't be required till at least 6pm, fish and chips was ordered for Matthew and I had another coffee. Boy, was I glad that I wasn't hungry. £16 for Fish and Chips

!!!! Well I suppose a KFC would spoil the Corrour ambience somewhat

.
To top that he didn't touch the peas, garnish or tartare sauce, but did say it was very good

!
Around 6pm, everybody started moving outside and more conversations flowed. 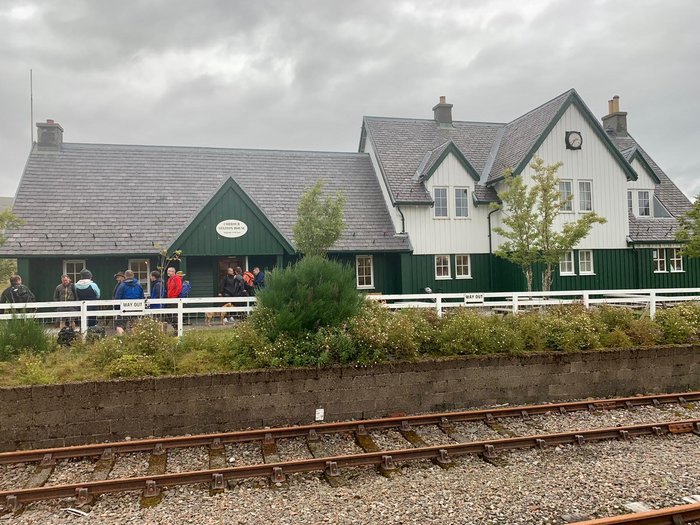 The compleation party ordered a "carry oot" including wine and I dread to think how much that cost. But I guess it was a one off day and they wanted to keep their party going on the train home. Unfortunately, the "carry oot" paper bags supplied by the cafe weren't up to the job and some bottles of beer bit the dust yards from the Station House door, much to everyone's amusement. The same thing happened on the the station platform, but as it was covered by the kind of rubber matting usually found in children's playgrounds, the result was a little less drastic.
To be honest, the part I had worried about, hanging around waiting for the southbound train, had become a very pleasant and unique experience and the time certainly hadn't dragged at all. And Matthew had felt the same. He had enjoyed, chatting with the others and impressing them with his geographical knowledge of Scotland's hills. 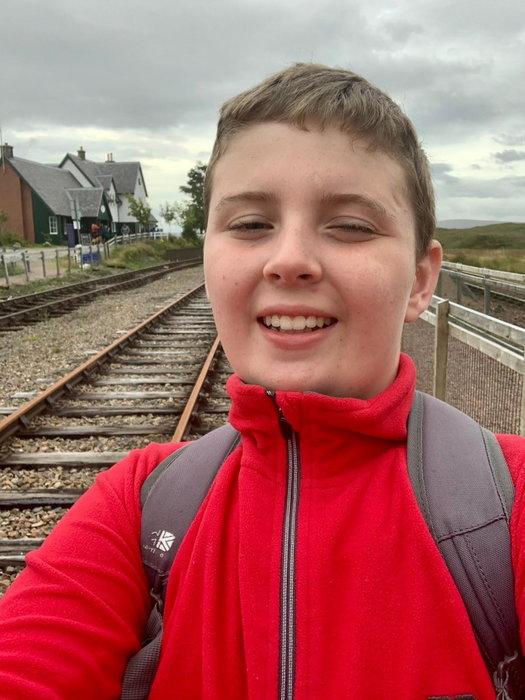 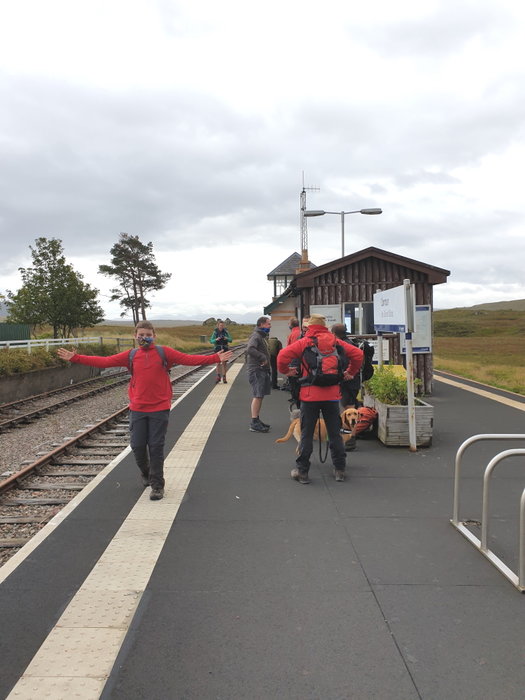 Waiting for the train 1. 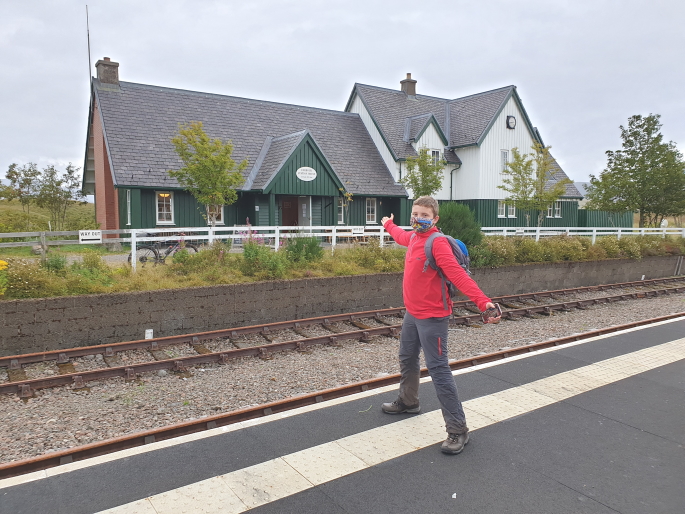 Waiting for the train 2.

The train arrived bang on time and everyone clamoured into the same compartment and a half hour later we were saying our goodbyes and then waving to the remaining passengers as it pulled away, the compleation party continuing

.
The car journey home got us back at the predicted 8.30pm. 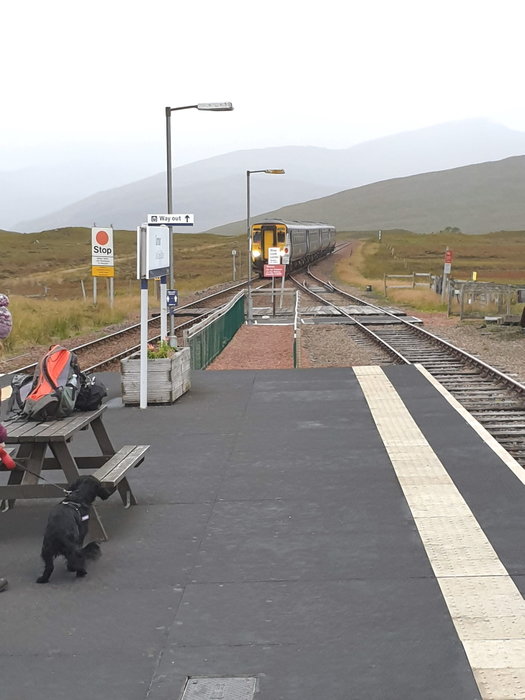 I know Beinn na Lap is unlikely to be on anyone's favourite hills list, but both Matthew and I enjoyed it immensely, due to the addition of the train journey, the shared experience feeling and of course Corrour's unique geographical position.

Re: Uniquely Different (for us anyway)!

Met a guy we had met in Torridon and then met up with again on a small group walking holiday at Corrour. He had just done his penultimate Munros further off, and was aiming for a compleation the following weekend on Beinn na Lap. So somebody who I suspect is the only Iraqui (by origin) Munro compleatist finished there as well as the party you met.