aonachs.gpx Open full screen  NB: Walkhighlands is not responsible for the accuracy of gpx files in users posts

Here's just a quick write-up of a fairly grey day in Glen Nevis. The route I posted is the actual gpx file from my watch, including the 'extras'.

I like to start my climbs early. I can avoid traffic on the drive in to the climb and can get a parking space. I know the mountains have been very busy since lockdown ended, but even going to the top Glen Nevis car park on an English bank holiday weekend with a decent enough forecast, I expected to get a parking space at 6.30am. To get one of the last (sensible) spaces was a surprise to me at least.

The weather was a bit dull and the few photos I took don't really add much to the previous reports of this route, but as has been said before, the walk round to the Steall waterfall is just magnificent. Popping out from the gorge path onto the wide open area is fantastic - or at least it would have been had (at least) one of the dozen or so tents in the valley not used part of the path as a latrine.

As the campers are left behind, the mountain to be climbed can now be seen. After following the path up from the bridge until it petered out, I aimed for a little to the left of the big band of rocks. The ground becomes steep grass right up until the ridge is gained. From here its a hop across the boulders to Sgurr a'Bhuic. After hopping down more boulders, the path then follows the cliff edge up to the next top. I opted to come away from the path in the couple of places I felt it went too close to the edge for my liking - it is easy to stay back from the edge here if you choose to. For me, this was where the level of the clag was sitting, just as I turned to head for Aonach Beag proper. The next photo shows the last view back down my route before going into the murk. Looking back down to Sgurr a'Bhuic on the left with the grassy first shoulder to its right.

From here it was up into the cloud and follow the path along the cliff tops. Not that I could see much : 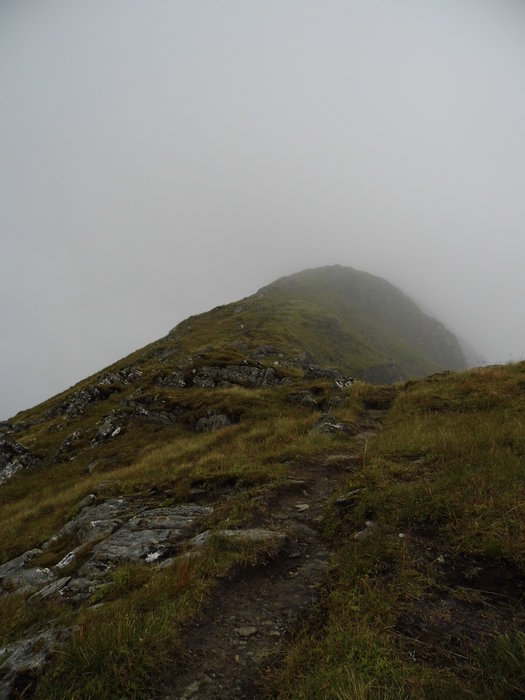 If you look at my gpx file you will see that I made an interesting diversion here. I could claim it was to look at wildlife or an amazing view, but the fact is I just followed the path a bit too far. Judging by previous reports I am not the first to do this in the clag, and given the obviousness of this path in the clag, I won't be the last either. If you are reading this while planning to tackle this route, be aware that in clag the obvious path comes away from the cliff edge and starts to traverse the hill. On a clear day I imagine this won't be an issue, but it was more difficult to follow the correct route than to end up on this traversing path. I don't know where it goes though, perhaps it does eventually lead to the summit. As you can see from my gpx, I didn't chance it and doubled back to where I came away from the cliffs then followed a less obvious path that did go along the cliff edge. Not long after that I reached the summit area : I followed the compass to get down from the summit towards the bealach with Aonach Mor. Here I briefly escaped the clag and could then more easily see the immediate route up Aonach Mor. I knew here that I should keep an eye out for the faint path leading to my descent route later. I would have easily missed it but for a tiny cairn of a couple of stones that marked it - as paths go it is hard to spot. Leaving that for later I was soon at the summit cairn of Aonach Mor where the views were still non-existent. 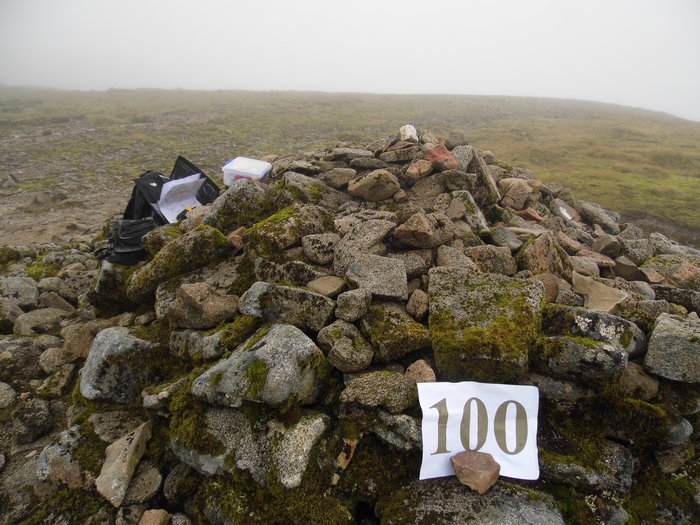 Aonoch Mor summit with my memento - No, I don't do this for all summits, and of course I left nothing behind.

Leaving my 100th behind I headed back to the little marker stones to find the descent route. Again, if you look at my gpx carefully, you will see that despite actively looking for something I had seen just minutes earlier, I ran right past it. Thankfully, after realising I had probably passed the marker, I turned round and went back up to it, finding the path this time. This leads gently down to two marker cairns guiding you to the steep descent to the bealach with Carn Mor Dearg. It was here I dropped out of the clag again. Looking across to Carn Mor Dearg Trying to give some idea of the descent path, looking down. 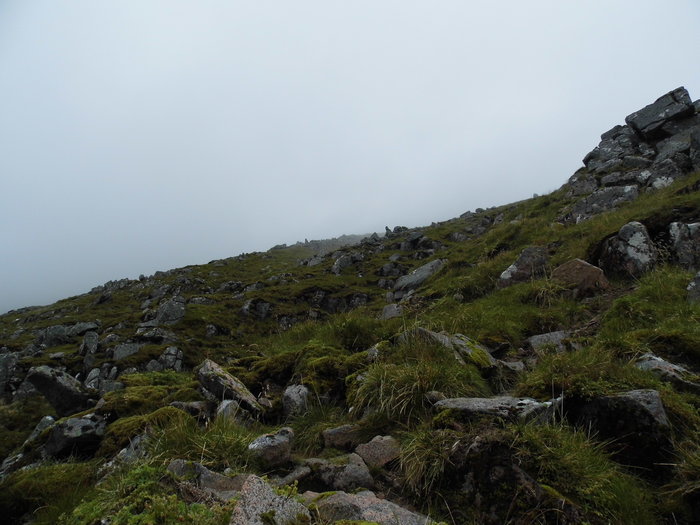 Looking back up some of the descent.

It took around 20 - 25 minutes to get from the double cairn to the bealach. From here, I followed a short path down the valley towards Glen Nevis. It lasted all of a few minutes before I was on to marshy ground for most of the rest of the way out. I stuck to the east side of the Allt Coire Giubhsachan (left on the way down). I can't imagine the other side would have been any worse terrain. Still the surrounding hills looked great - the clag seemingly now lifting a little perhaps. I could see a few figures crossing part of the CMD arete at one point. The last issue I had was that I was heading to a confluence of the two rivers on either side of me - the Allt Coire Giubhsachan and Allt Coire nan Laogh. The route description crosses the Allt Coire nan Laogh just above this confluence point. I didn't find any suitable crossing here. Instead, I carried on down almost to the very point where they meet, and found what was probably a rather dodgy series of leaps across rocks in the Allt Coire Giubhsachan. I would recommend crossing either of these rivers slightly higher up the hill if possible.

At this point I could spend ages grumbling about the hundreds of other people blatantly ignoring social distancing recommendations on the path between Steall falls and the car park, despite a sign at the start of the path, or the unbelievable parking all the way up the single track road in Glen Nevis, but firstly it doesn't detract much from a fantastic route which I'm sure would be even better without clag and secondly, I don't think many would be surprised. I was happy to return to the car just 11 seconds under the six hour mark, good going for someone who has taken over 30 years to get to the 100 mark!

Re: Aonach Beag and Aonach Mor

Hehe, I ended up at end of the 2 streams as well when I did these . Backtracked a wee bit and got over- schoolboy error as I knew I had to get over sooner , but carried on down

Re: Aonach Beag and Aonach Mor

reaching 100 is rather special. Can't believe that the car park was nearly full that early in the morning

great two mountains those two. Did them back in the days together with Ben Nevis and the CRM.