First walk report on walkhighlands having been a long time lurker.
A group of three of us decided to tackle the Ben Lawers 7 over the weekend and had one of the best hill days ever, felt that this was worth a post and wanted to encourage anyone unsure about doing it to go for it!

We'd started planning the day the week before keeping a keen eye on the forecast. Sunday looked good so we got up early in Glasgow (whilst it was still dark

) and drove in two cars to meet at the Ben Lawers hotel with the aim to have one car left there for the end and drive together to the start - parking at a small car park by Lochan na Lairige. Would recommend getting to Ben Lawers Hotel early (before 08.30) to get a parking spot, a few minutes later and we would have had to come up with plan B because it was filling up quickly!

We met a gentleman in the car park who was planning on walking the opposite way to us and was aiming to complete 3 Munros (Meall Greigh, Meall Garbh and An Stuc) allowing himself 8 hours, we had anticipated 7.5 for our day and started to feel a bit dubious about our route plan timings.
Despite it being quite early still there were already a fair few cars parked by Lochan ne Lairige but I managed to squeeze the Yaris into a small gap between other cars. We were ready to go, and were keen to get started after a swarm of midges greeted us as we got out of the car.

The walk to Meall a' Choire Leith quickly brought us back down to earth. Somehow in the bright early morning sunlight we'd managed to miss the path by following a sheep trail and were soon traversing pathless across very boggy and wet ground. Freda had wet socks within 20 minutes of starting and we were questioning our life choices. However as it was such a beautifully clear morning the grassy mound of Meall a' Choire Leith was easy to target and after the steep 300m of ascent after crossing the stream feeding into Allt Gleann Da-Eig we reached the summit catching up with a group with two lovely dogs who had taunted us with concerned faces running up and down the incline whilst we heaved our way up. 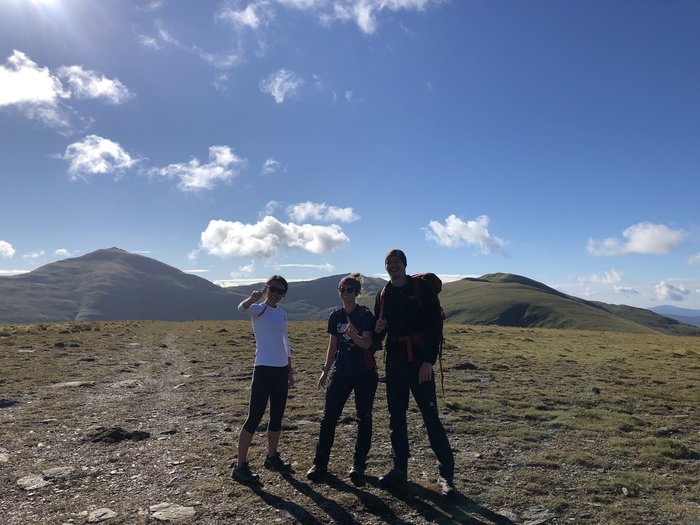 Feeling excited at the prospect of the day and being able to see the whole of the range in front of us we eagerly set off for the next peak - Meall Corranaich along a well worn and thankfully dry path. We followed this down to the ridge with the steep Coire Liath to our left. The path was clear to follow until it started to fade away as the source of the stream was reached at around 930 metres. We veered SW to the ridge leading up to the summit of Munro number 2. A small cairn marked the top and we took a quick self snap "2" and a mouthful of water before heading steeply down towards the well established path to Ben Lawers from the car park. 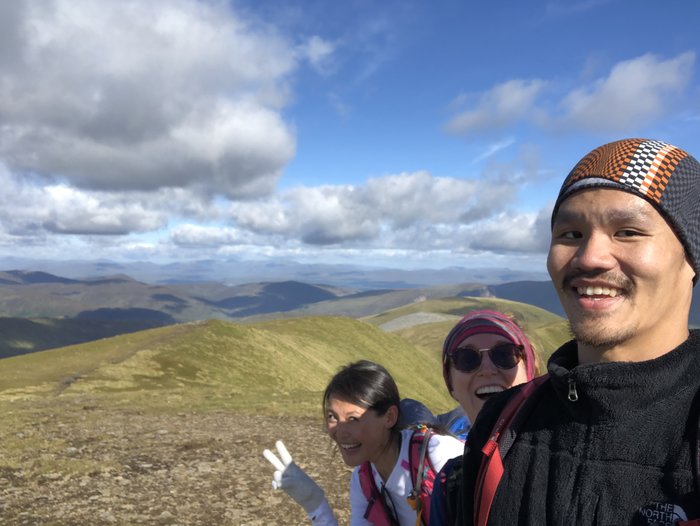 We crossed this clear path and started a steep ascent along a grassy path up the western shoulder of Beinn Ghlas. This was a short sharp climb and we were soon on Munro number 3. After having only seen a couple of groups so far it was a bit of a shock to come across several people at Beinn Ghlas summit. The views were incredible - across to Loch Tay and the Crianlarich hills to the south-west. 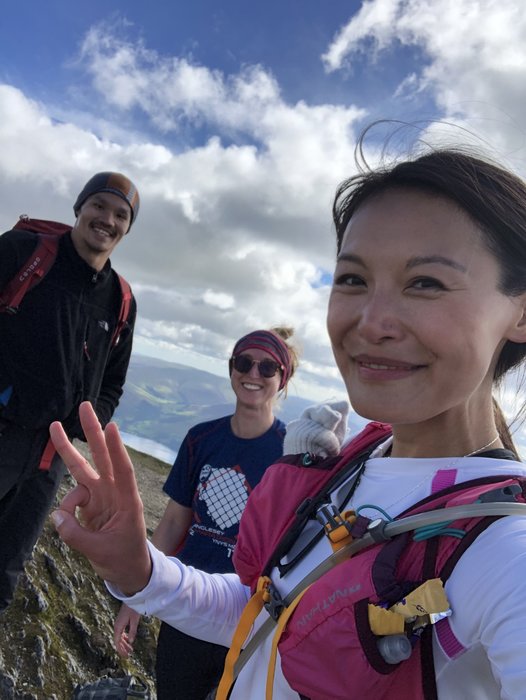 We left people having coffee and pastries from flasks to get on to Ben Lawers. The path was well maintained with stone steps and was very busy with lots of groups winding their way up it. I was behind two young German lads who were discussing their night out the night before without breaking a sweat whilst I panted up behind them, trying to keep up with Rod's long legs. Ben Lawer's summit was very busy with groups with speakers and picnics. After the relative peace from the previous hills it was like a fairground and I wouldn't have been surprised if there had been a van selling hot dogs parked up there. The sun was bright and a kind lady took a group photo of us from several angles at the Trig point so get our best view before we moved on quickly and within minutes were back to relative solitude with just one man wearing an OMM tracksuit in front of us to head NE to An Stuc. 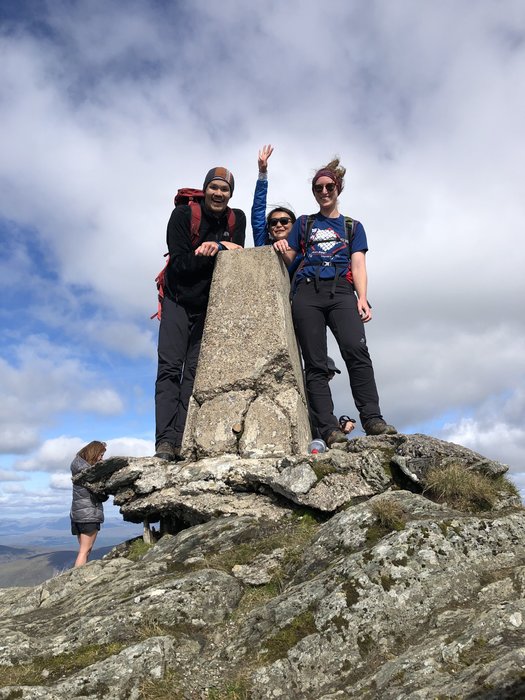 The path to An Stuc was clear and dry and as we lost height it rose up intimidatingly before us. I remember reading about the scramble down the other side and tried to push that the the back of my mind. We had a brief pause at Bealach Dubh for a sandwich and then made the surprisingly okay steep ascent to reach An Stuc. Here we bumped into our friend from the car park who pointed out the domed peak of Ben Nevis and Buachaille Etive Mor in the distance and took our photo of Munro number 5. 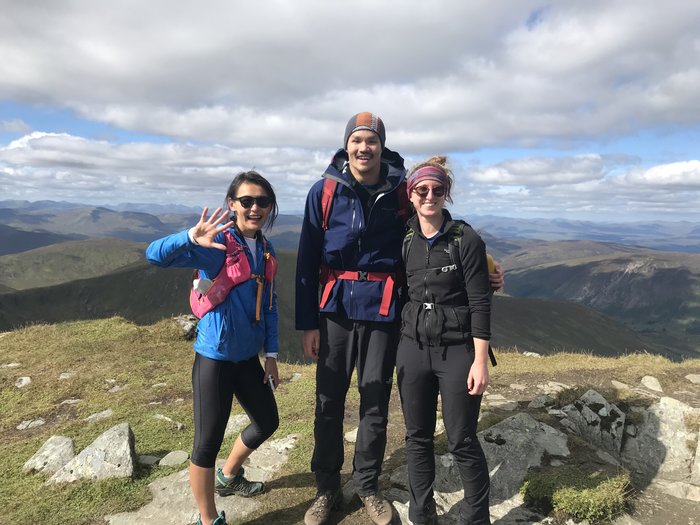 Next was the bit I'd been dreading the scramble down from An Stuc. I find going down a scramble I'm unfamiliar with worse than if I had been up it before. We had been warned by two groups of the "near vertical" wall we were approaching. When it came to it, the path way easy to follow and the scrambling did not deserve the hype that I had created for it. It was all over in a minute with plenty of hand holds and then we were on Meall Garbh. 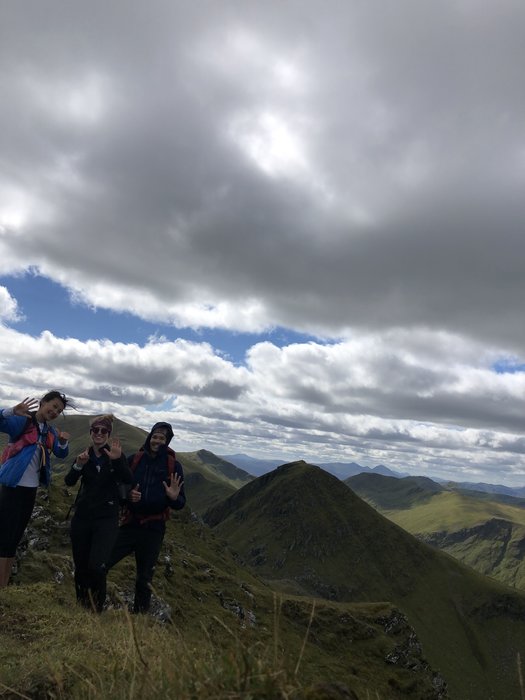 The next part of the walk was a bit of a slog across boggy and featureless ground, initially following the fence posts and then on crossing the stream at Lairig Innein following a grassy path slowly to the summit. The view backwards across to Ben Lawers and An Stuc was very pleasing, as we could trace our route back. 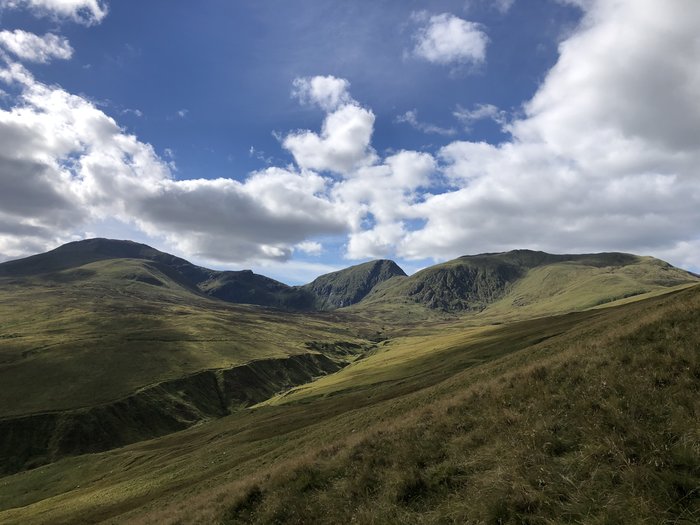 We were very pleased to have reached Meall Greig from the beginning in 4hours and 31 minutes leaving us hopeful for a timely finish at Ben Lawers Hotel. 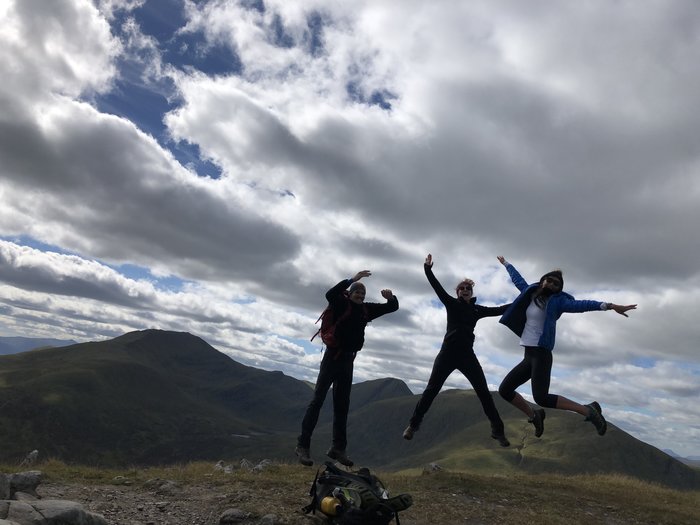 However the walk down from Meall Greig was difficult to do briskly as we were at the end of the day. It took far longer than we had anticipated with tired legs and sore knee caps and was a bit of a plod back to the car park. As we had started relatively high up we had further to descend along the 5km or so back to the Hotel. After a brief walk along the road we arrived back at the hotel and had a cold soda and lime (driving) to refresh before heading home. Absolutely fantastic day on the hills though, already planning the next opportunity to get out!