Wainwrights included on this walk: Bakestall


I had intended doing Bakestall as my first hill tomorrow but with the snow that is forecast overnight and tomorrow morning I decided to get it done today. I arrived at Peter House Farm at 15:30 so had exactly 2 hours of daylight left for the 1,700ft+ ascent and a round trip of about 7km.

I set off along the Cumbrian Way heading for Dash Falls so that I could ascend via Birkett Edge. After about 10 minutes of walking I noticed what looked like a path zig-zagging up the north flank of Cockup. A quick look at the map made me realise this was a more direct route to the summit so I turned off the Cumbrian Way and headed through a couple of fields towards the fell wall. This was my "cock-up on Cockup" moment. What had looked like a path wasn't a path. I ended up ascending over 1,500ft through deep grass and heather on a very steep incline. When I finally got close to the top of Cockup I could see Bakestall behind it with the ravine of Dead Beck between me and Bakestall. I had to continue heading up through the heather until I found somewhere to drop down into the Beck and start heading up towards the edge of Dead Crags hoping to find a path. I never did. By the time I got to the summit of Bakestall I was really struggling to push my legs through the grass and heather and was starting to think I would run out of daylight. I was now above the snowline and knew there was more snow on it's way so was starting to get a little worried about what I had gotten myself into. It had taken me nearly an hour and a half to get to the summit and there was only about 30 minutes of good daylight left. I was also conscious of the fact that the Dead Crags and Birkett Edge were only a few yards away so I really didn't want to be getting off this hill in the dark.

Luckily, the descent down the south east side of Birkett Edge was much easier than I had expected and I was back on the Cumbrian Way at Dash Falls in about 15 minutes from the summit. The walk from there is really easy going and fast so I was back at the car by the time it had started to get really dark.

This was a good lesson for me in how easy it is to get into a situation that could very easily turn very bad. My big mistake was going off-piste on a walk where I knew I had no contingency time. I won't be doing that again in a hurry!

Here is my route and some pictures... 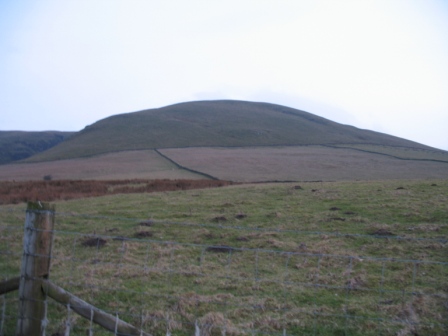 The brown scar running up from right to left is what I thought was a path. We've all done it Derek, was parking ok? I have spotted on another web site and I think its a good idea to show a photo of parking for others to see the area when they arrive, sometimes thats the hardest part of the day, setting up base camp

The parking at Peter House Farm is easy to spot as it is at the point where the Cumbrian way crosses the road. It looked like there would be space for around 10 cars but there was only one there when I arrived. I would imagine it is difficult to find a space there in summer if you aren't there early.

We've all seen paths that aren't there

, usually due to some subconscious pressure (time in your case) 'helping' us recognise a way to reduce that pressure , having said that I would have taken that 'line' on the first pic as a path too. The best result from any error made on the hills is to be back at the car just a little embarrassed

Still enjoyed your report and pics, and glad your 'cock up' had the best of outcomes