Another weekend of changeable weather, and we weren't sure what to do. I had fully intended getting up early on Saturday morning to go somewhere on my own, but somehow that didn't happen and instead we took my inflatable kayak out in the afternoon on a local loch...hoping to incorporate this into some trips again sometime.

Sunday looked more promising, especially in the Cairngorms. Jackie was apprehensive but also keen to find out if she was fit enough to do some kind of Northern Corries circuit rather than another Graham. We decided to head up the Fiacaill Coire an t-Sneachda, which gave us a number of options once on the plateau. No early starts for us - we got walking at around 12:30pm. Around Loch Morlich had been absolutely heaving, but the ski centre carpark was more typical for this time of year - busy but with plenty of free space.


our_route.gpx Open full screen  NB: Walkhighlands is not responsible for the accuracy of gpx files in users posts
We were up the usual path towards Coire an Lochain, the air temperature quite chilly but with more sun than forecast. This time, we stuck to the main path a little longer than usual, which led us with a couple of left turns to an actual path to the Fiacaill. Somehow I have always missed this route in the past as I've been too impatient to get onto the ridge (usually heading into Coire an t-Sneachda and crashing across heather for a bit). Nice to know there is a non-heathery route 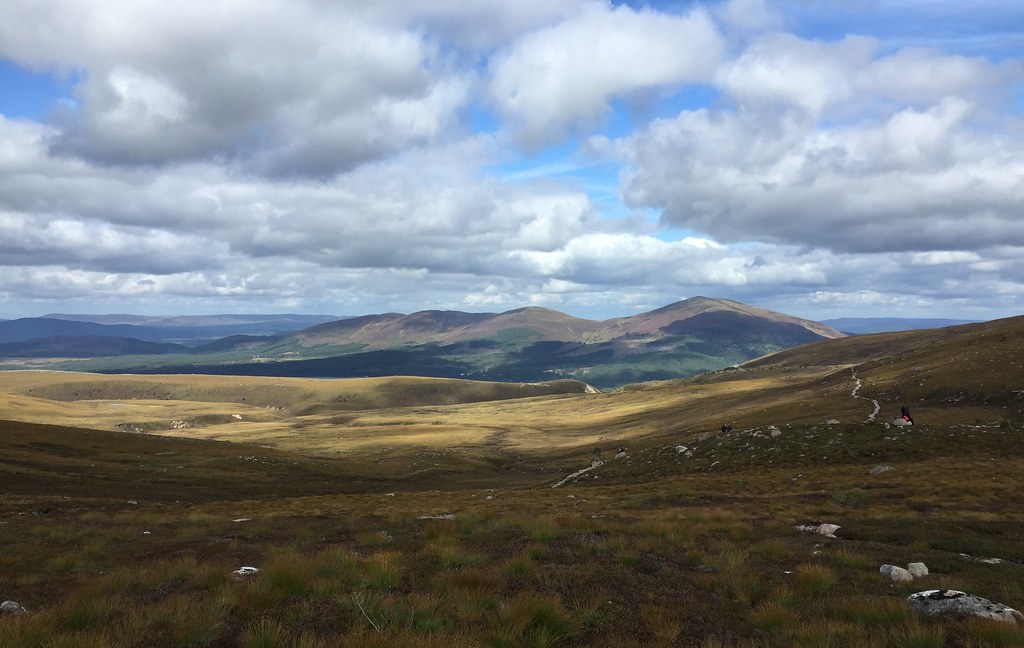 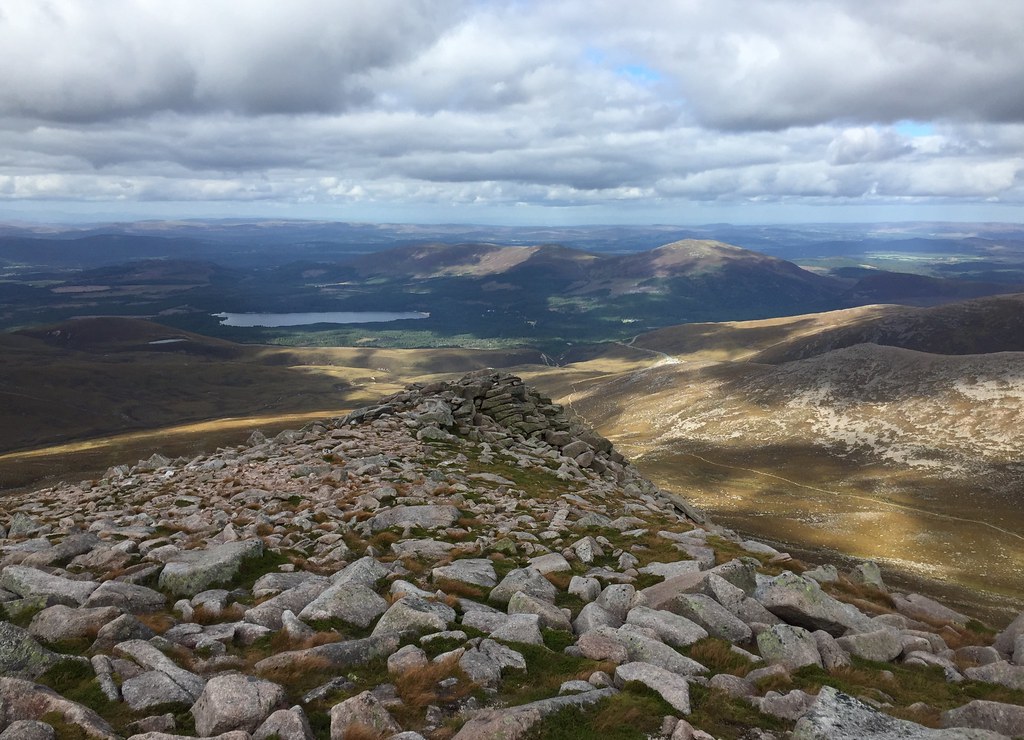 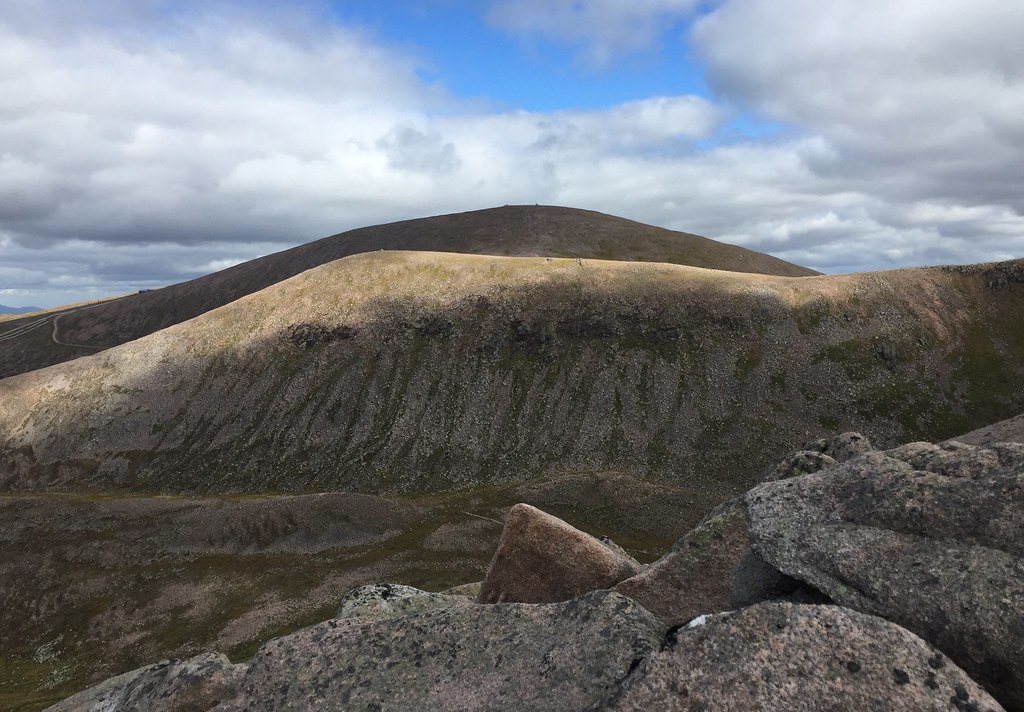 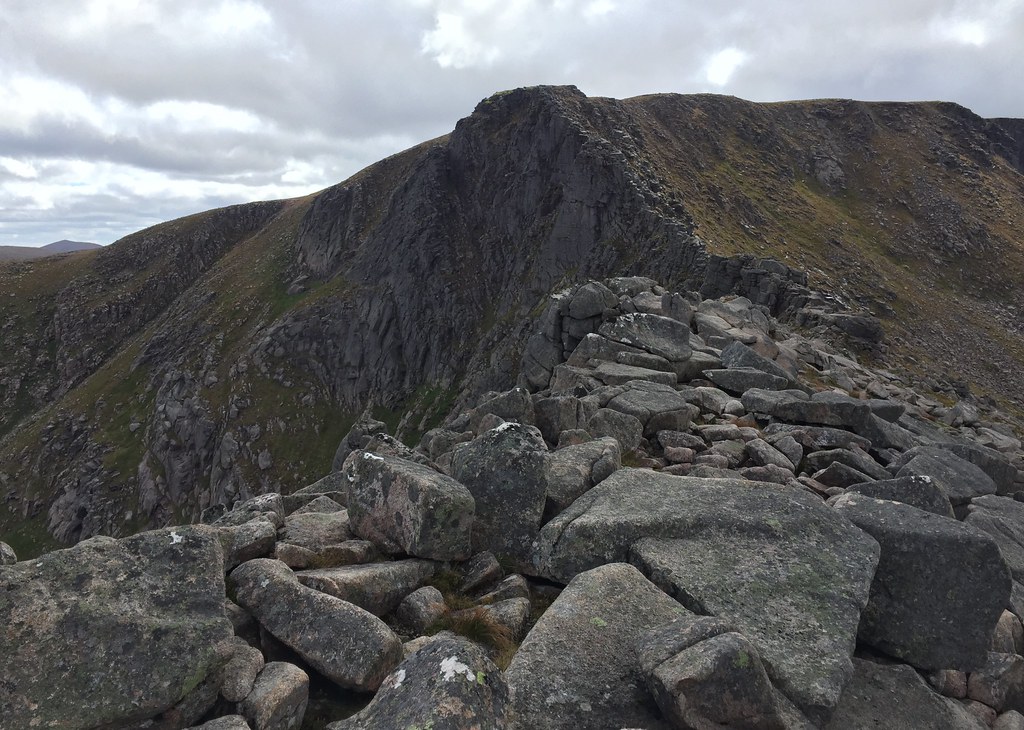 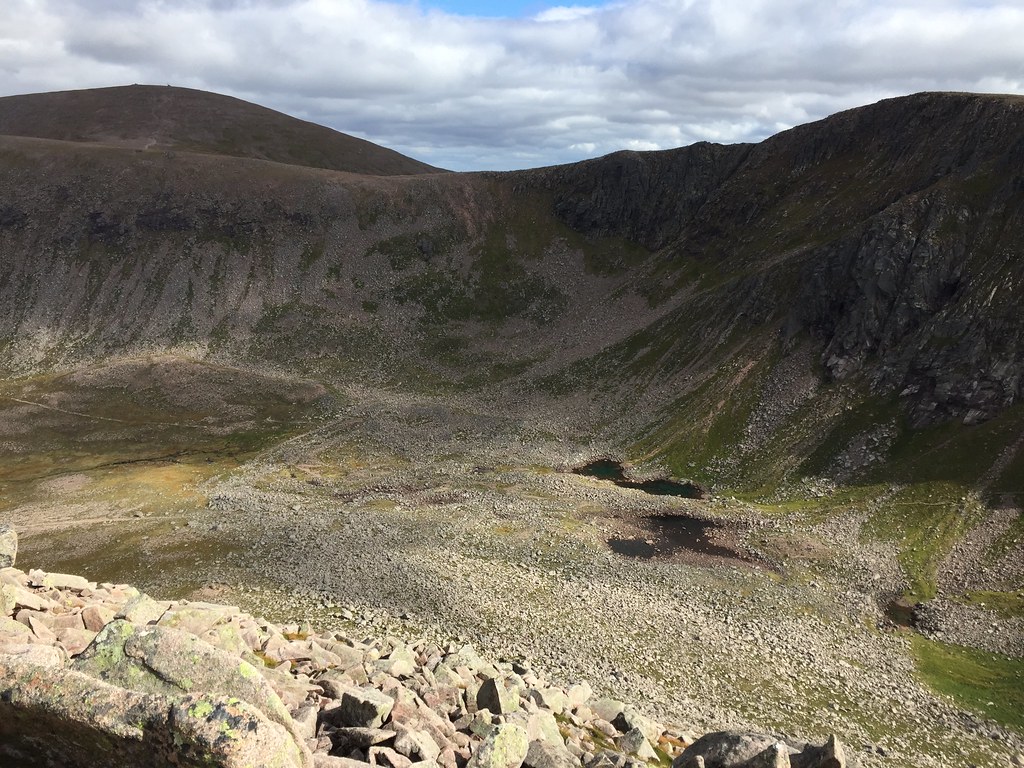 Across Coire an t-Sneachda

Although it was chilly, we soon warmed up on the ascent - it is quite steep and boulder. We stopped for lunch just under the intermediate summit before the scrambly bit. There were a number of groups practicing climbing skills up here. 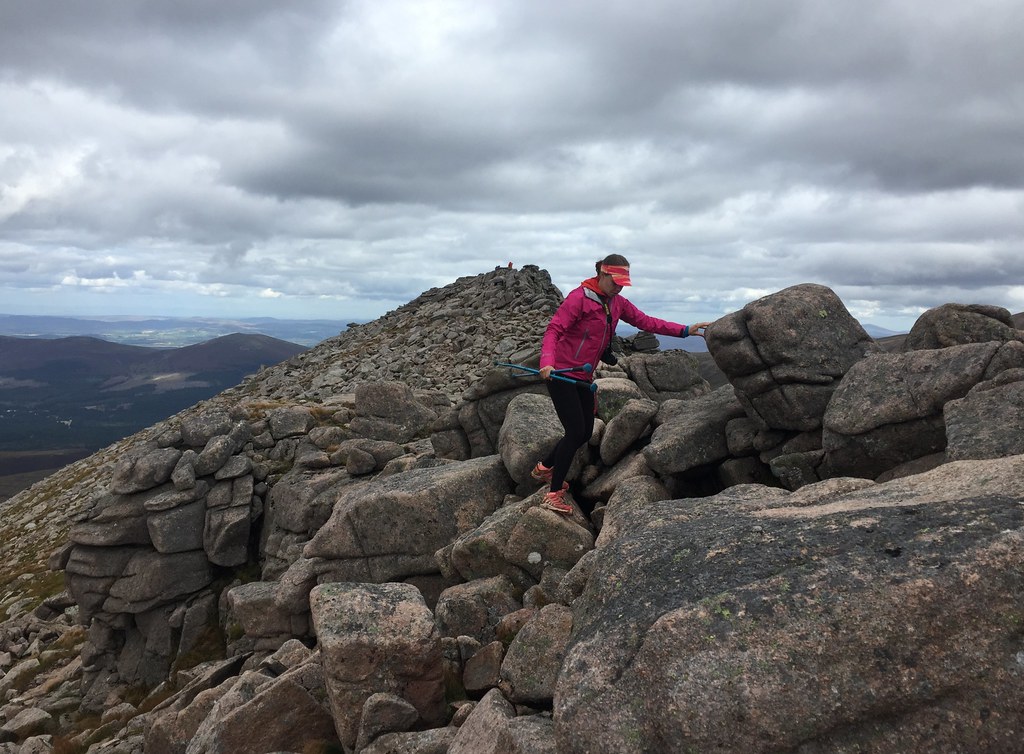 Jackie had ended up skipping around the awkward bit of this scramble on the last couple of visits, and she thought that this might be the time to get up it properly (no ice, high winds or heavy camping packs this time). However, having gone up first, I wasn't very good at getting her confidence up - looking back down the drop I had just climbed up, and with cold fingers, I just didn't sound like I thought it was easy. I reckon she would have been fine if I hadn't been there! 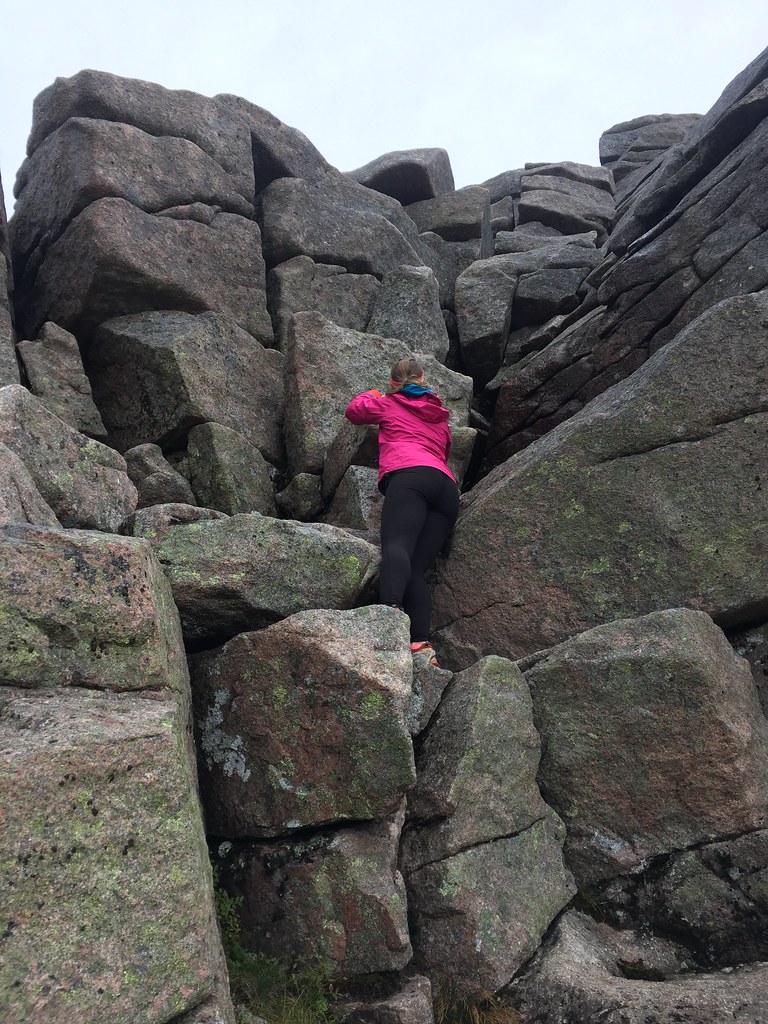 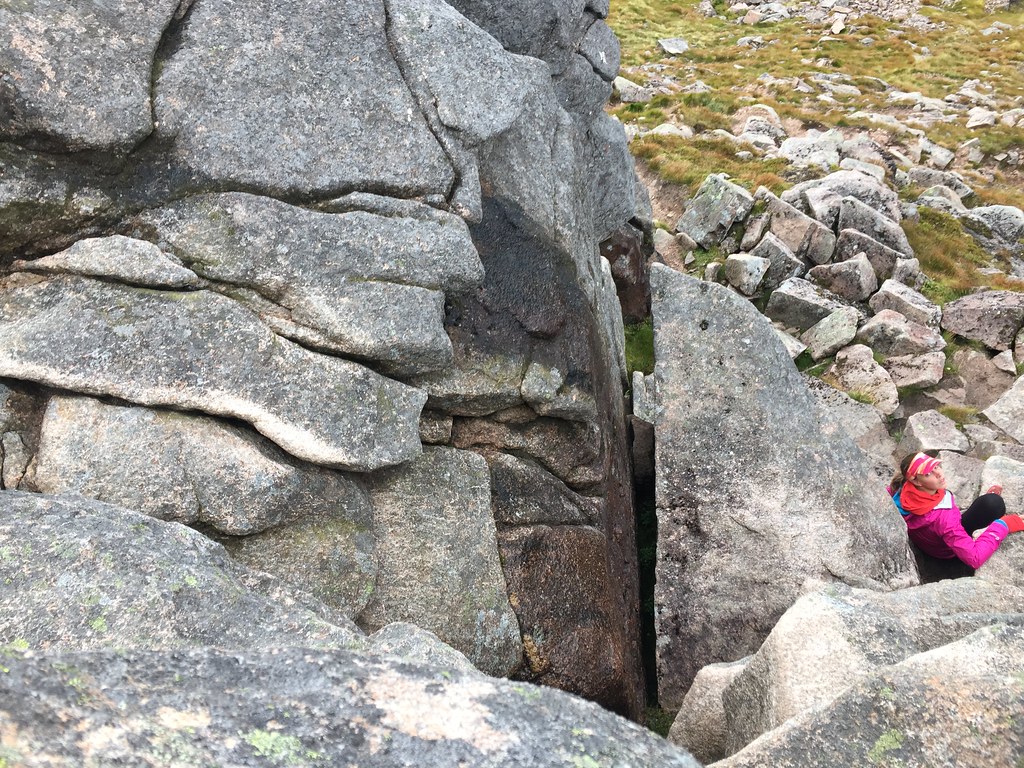 Looking back down the steep bit 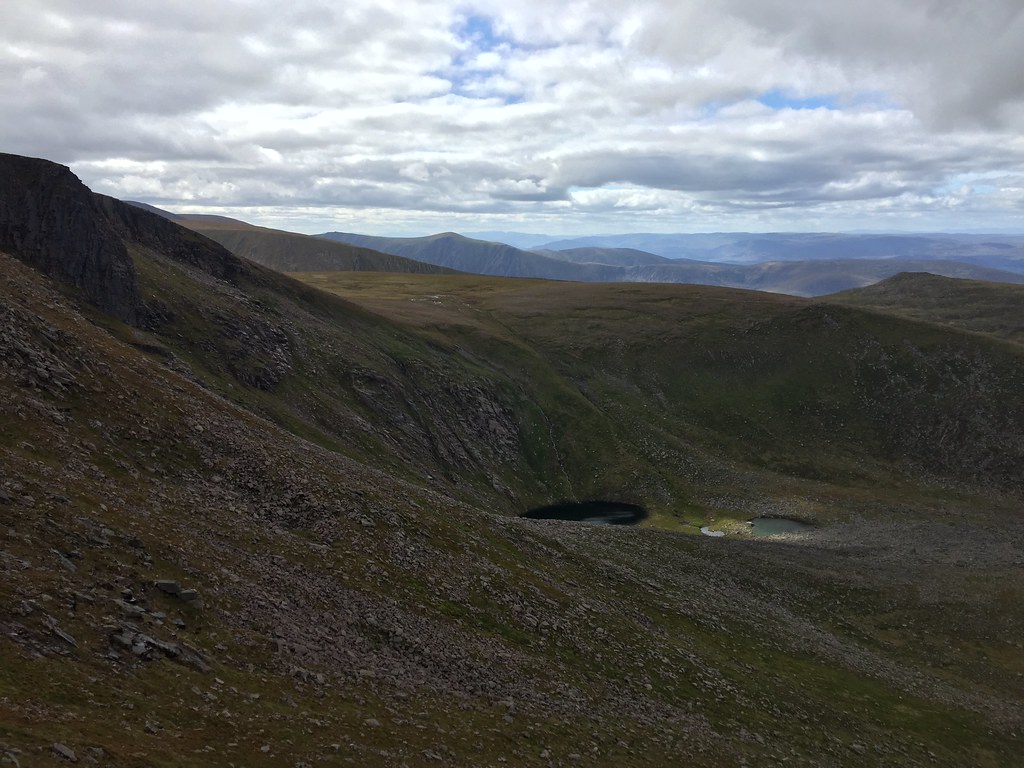 Across Coire an Lochain

Jackie joined me on the easier top bit of the scramble and before long we were on the plateau. The easiest way off in terms of additional height gain would have been over Cairn Lochan, but we decided that a vantage point over Loch Avon would make this trip complete, so we headed over to the top of Hell's Lum Crag instead. 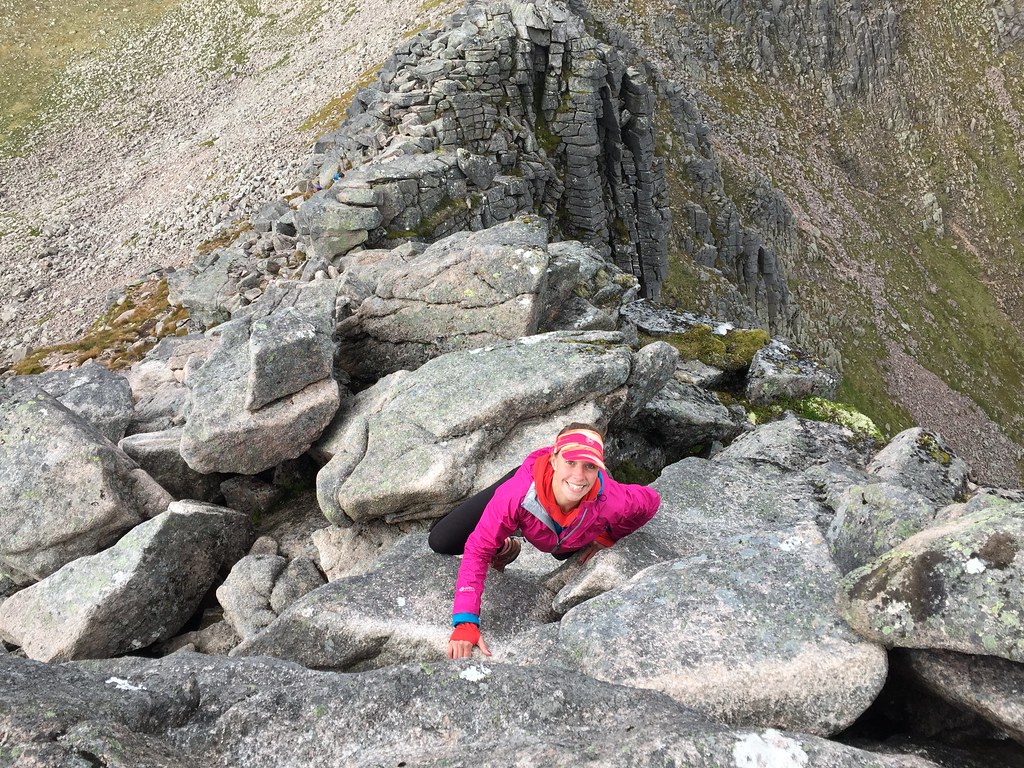 Top of the scramble on the Fiacaill 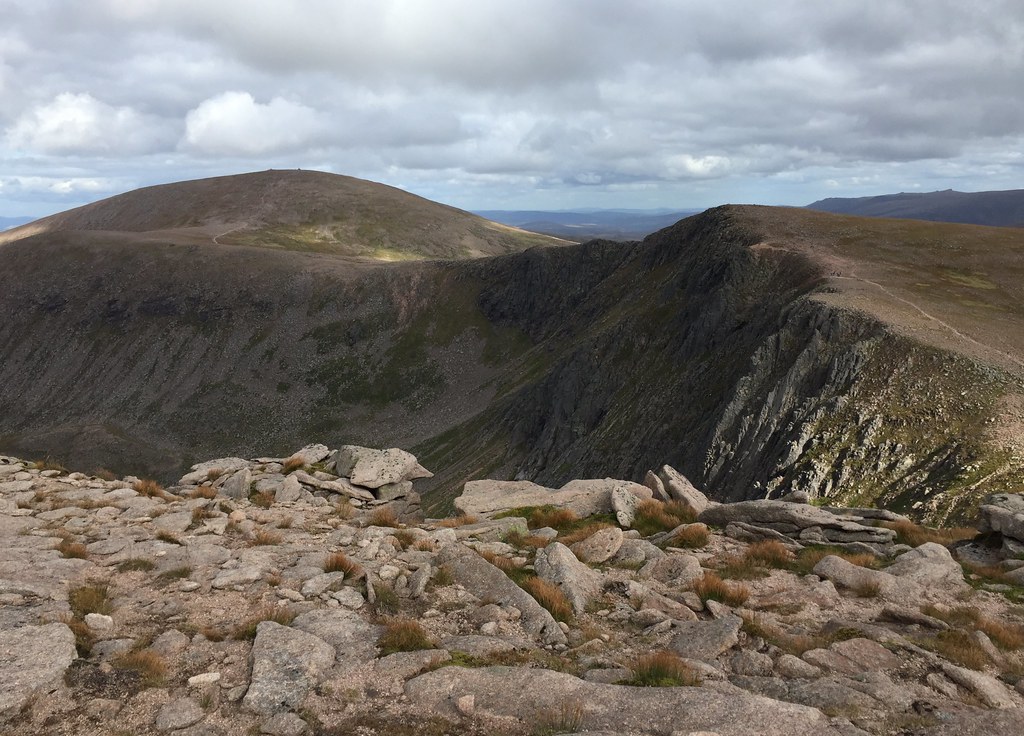 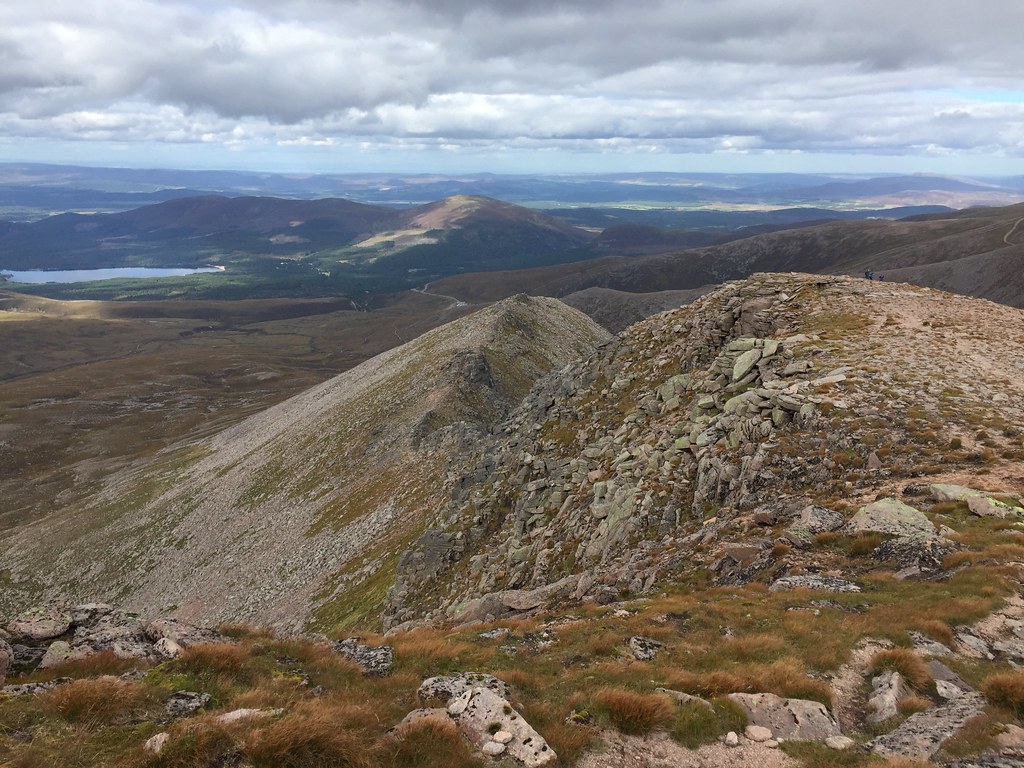 Looking back down the Fiacaill 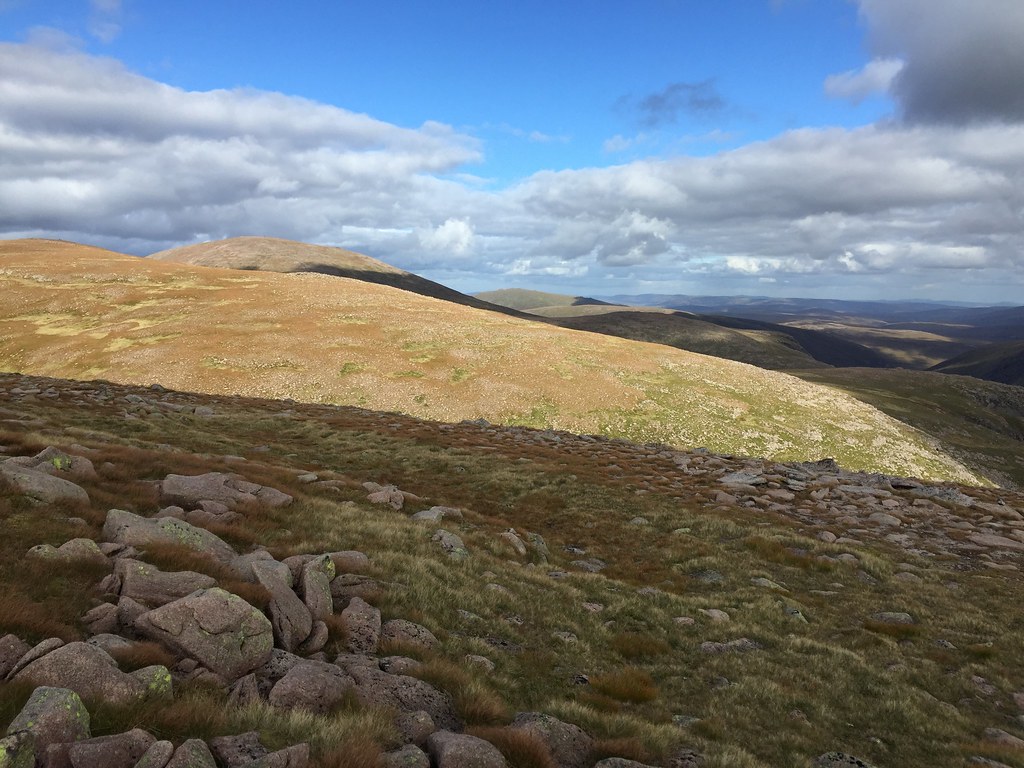 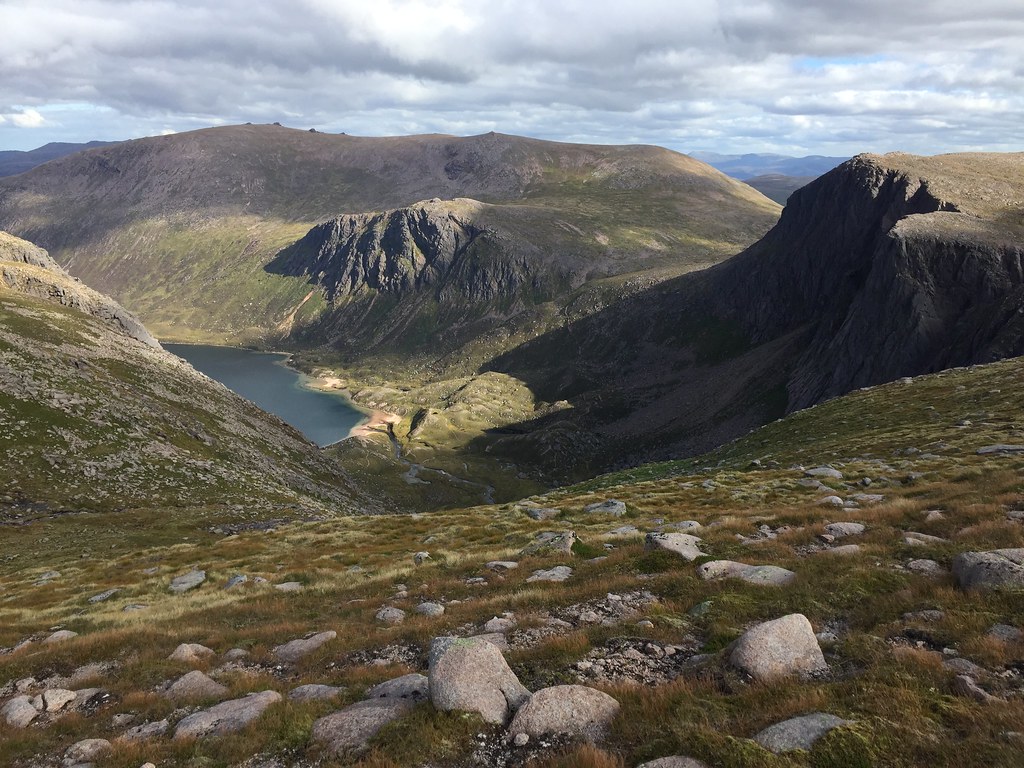 While out in this direction, we spotted a bit of a path along the top of the Stag Rocks - seemed like this. Rather than going over the summit of Stob Coire an t-Sneachda as we had thought, we decided to head out here, dropping over the Allt Coire Domhain and contouring back up the other side of the corrie. This turned out to be a great idea - can't believe I haven't been here before. My thought had been to try and persuade Jackie on towards Stac an Faraidh, but this was just as good, and left us with less ascent to get back to the car. We stopped for a break overlooking Loch Avon. 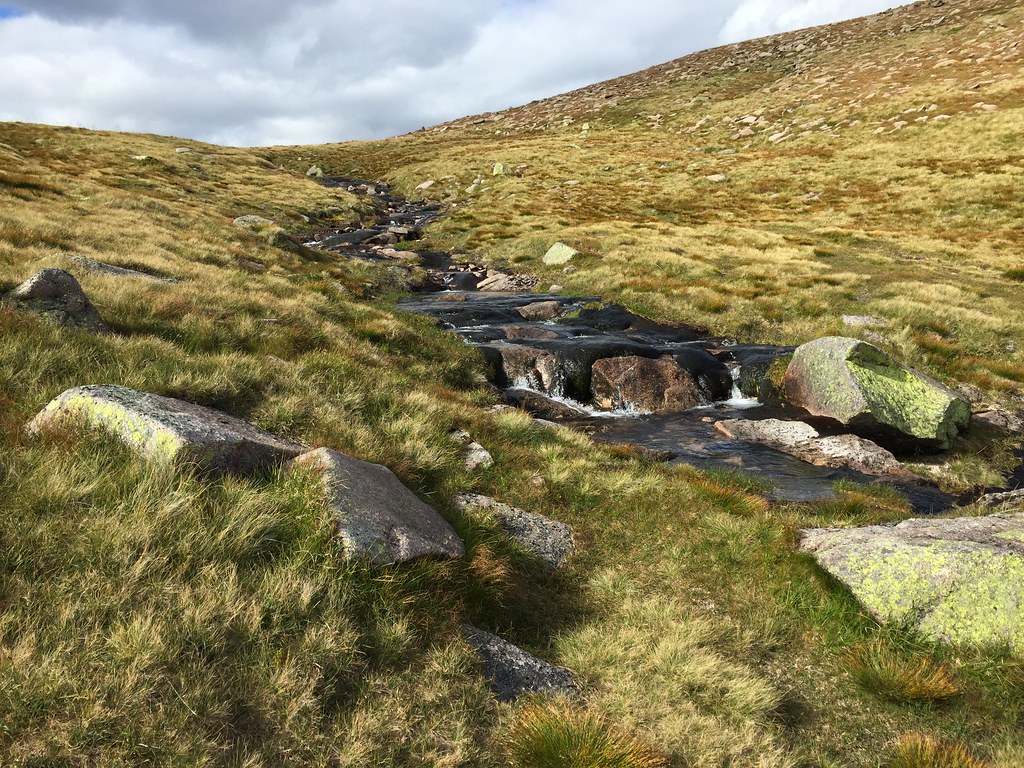 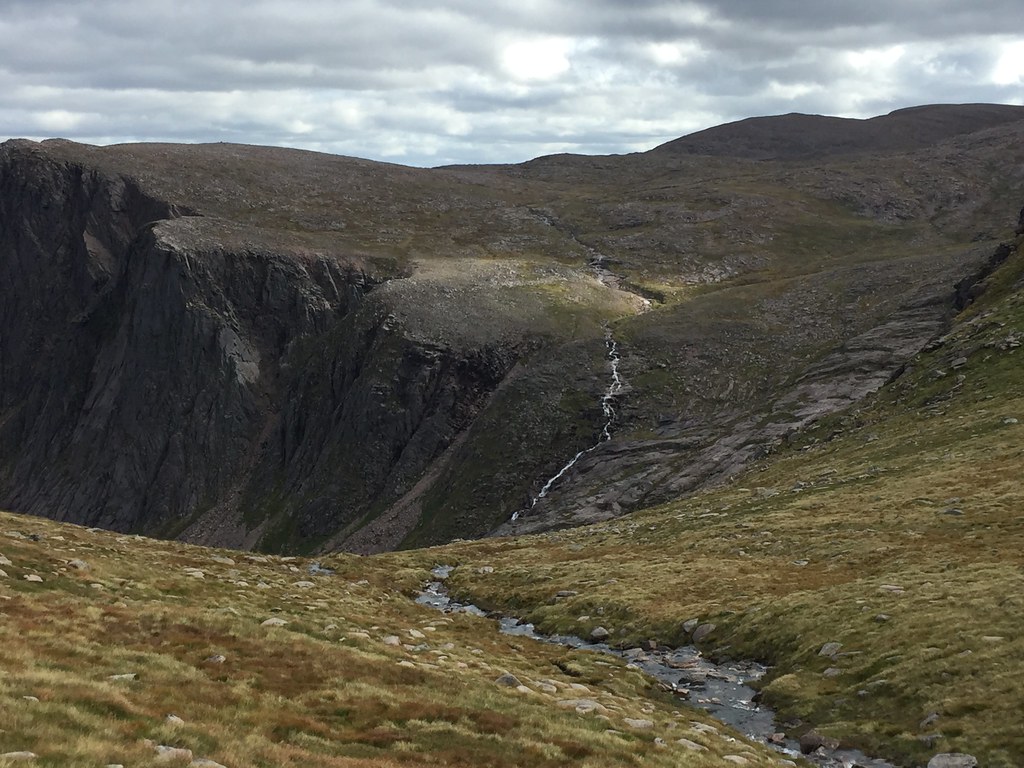 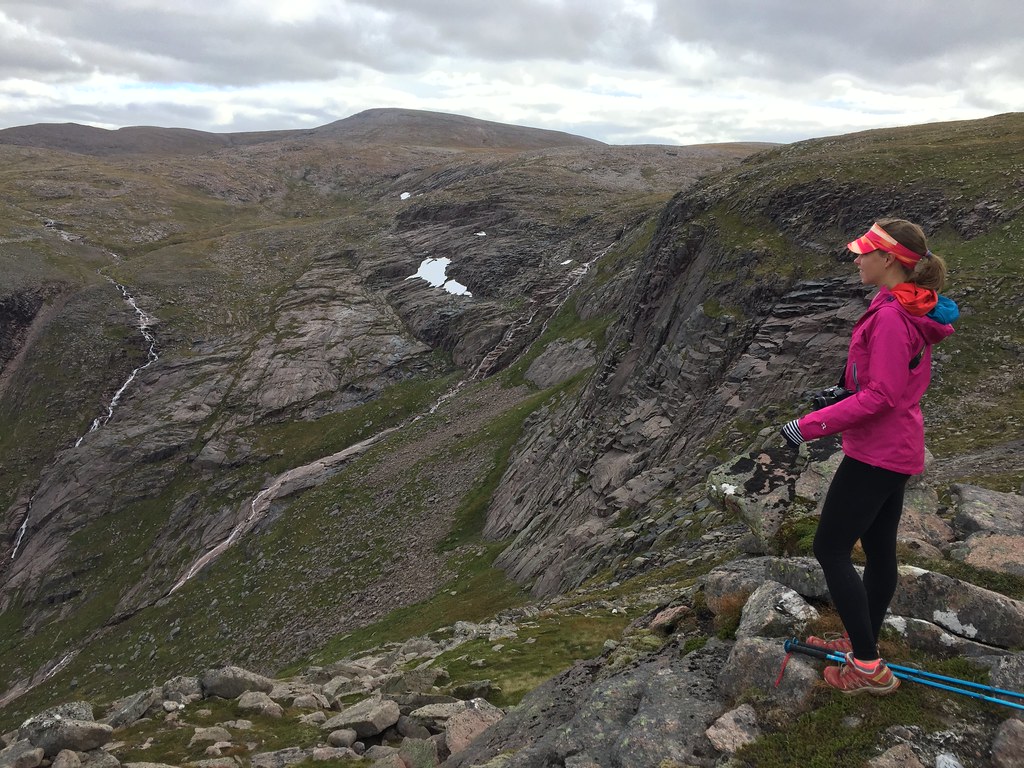 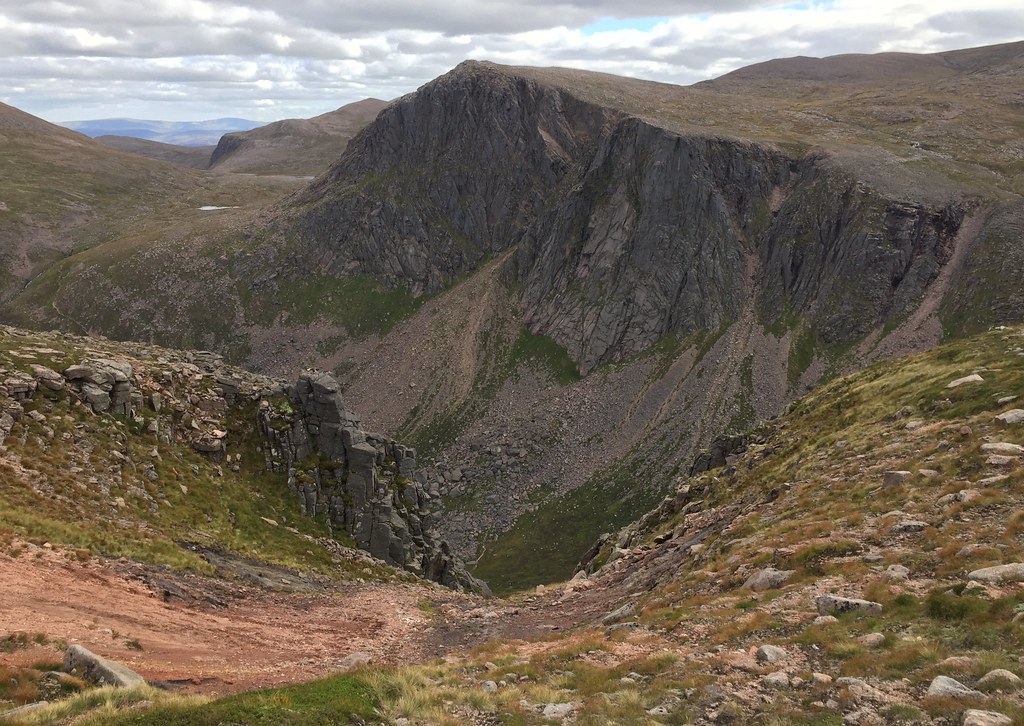 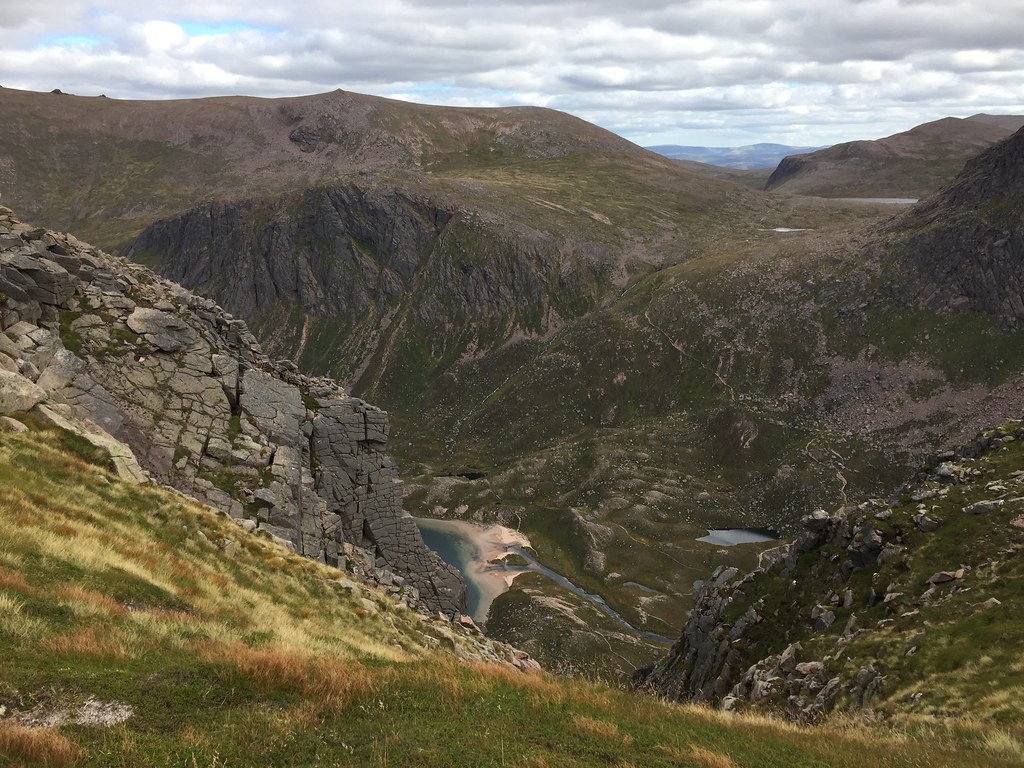 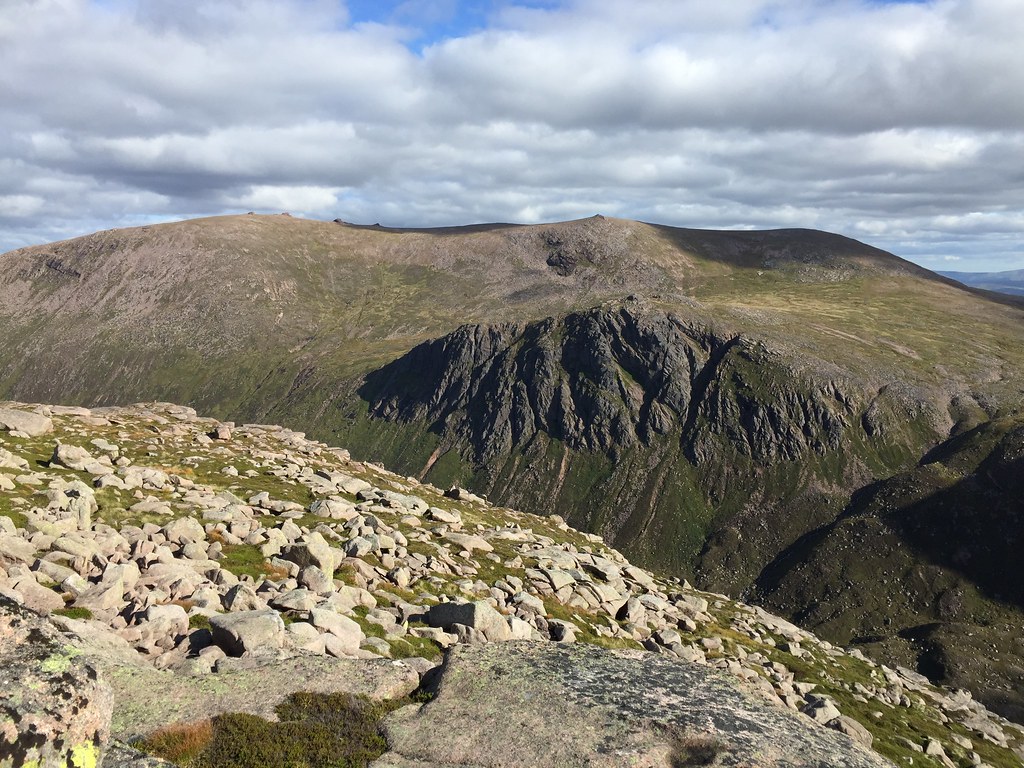 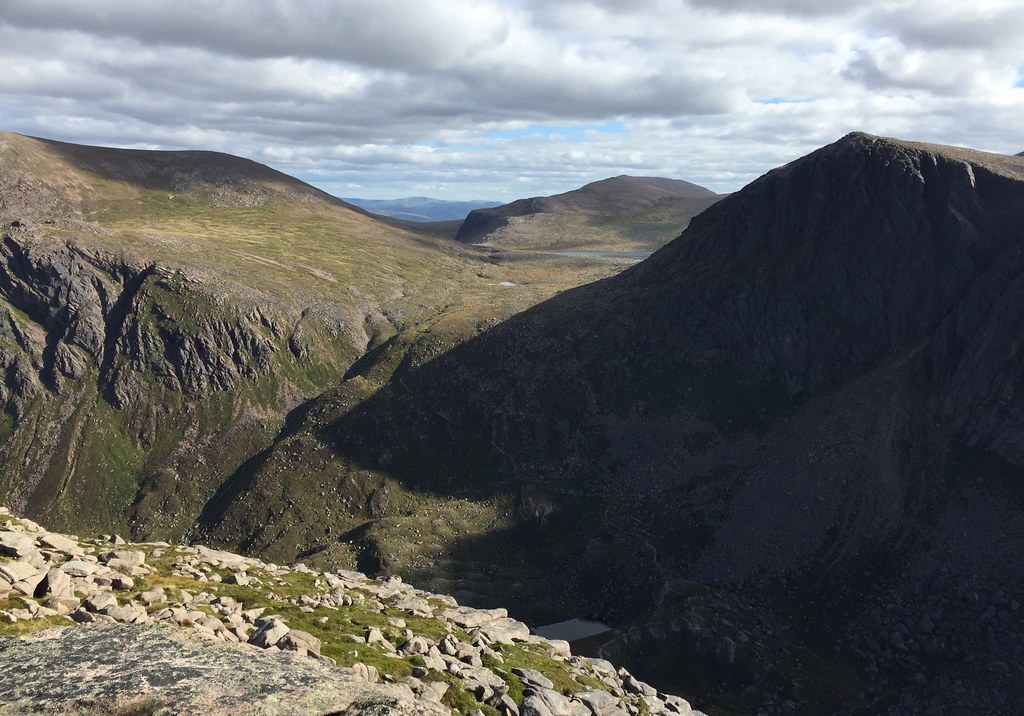 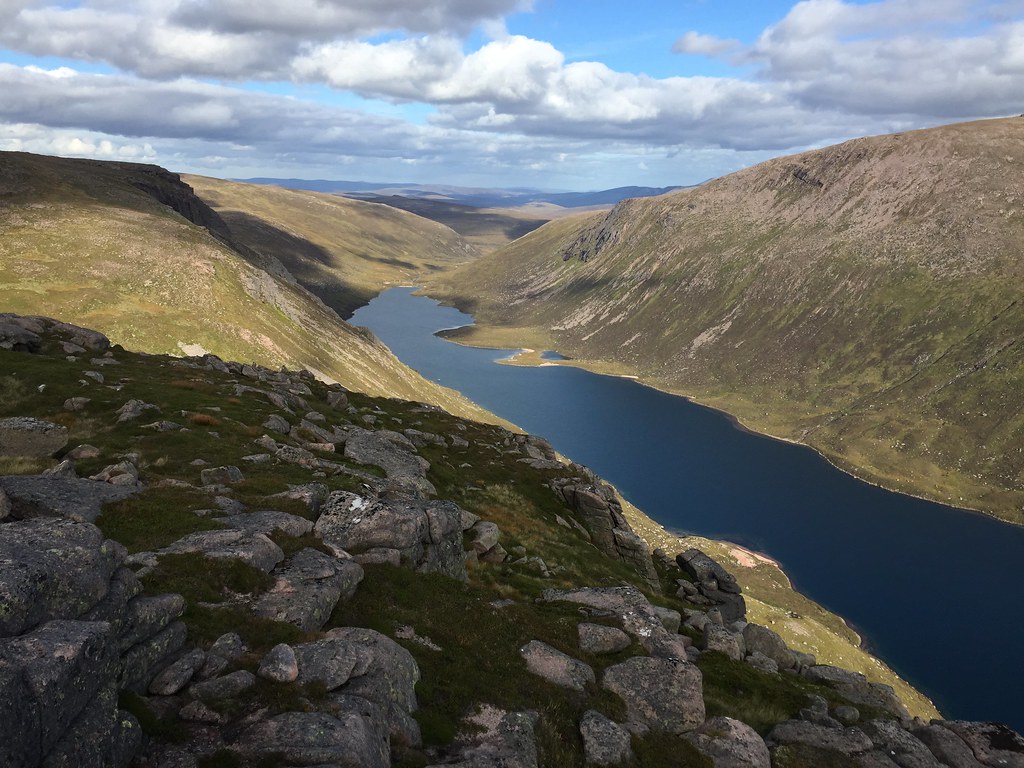 As we contoured back up towards the top of Coire Raibeart,we found a bit of a path to make the going easier. Jackie almost opted to go over Cairngorm as she felt quite good. However common sense kicked in and she decided not to overdo it - a good decision as she started feeling pretty tired on the final descent to the car. 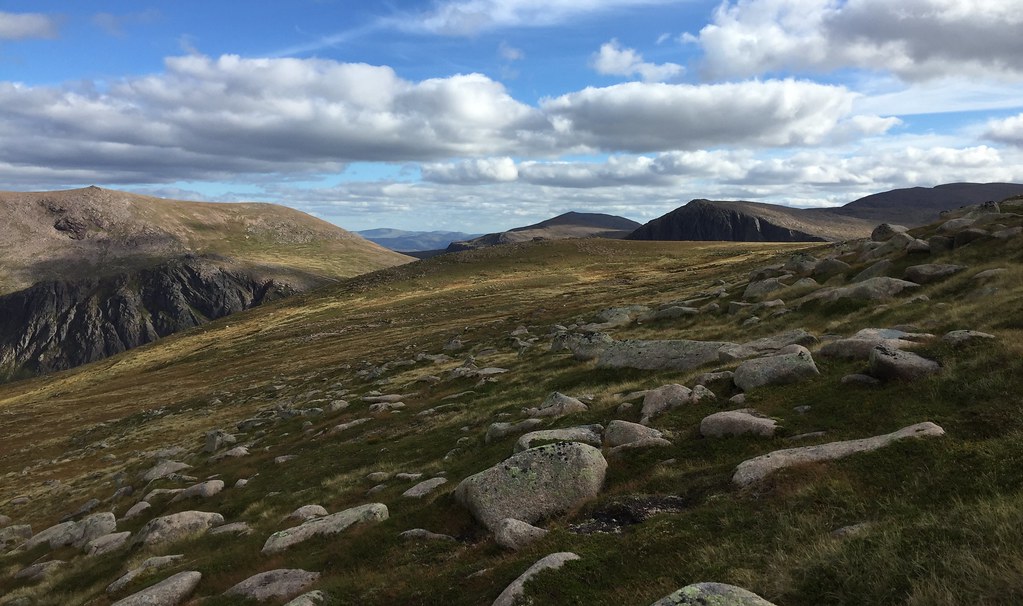 South over the plateau 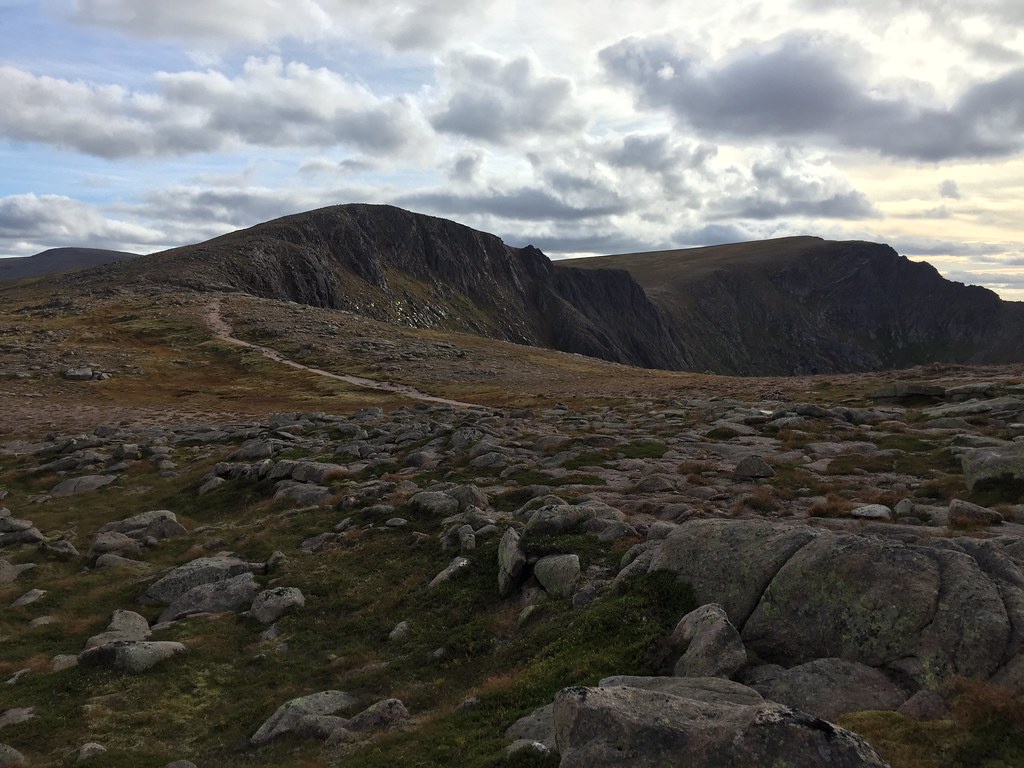 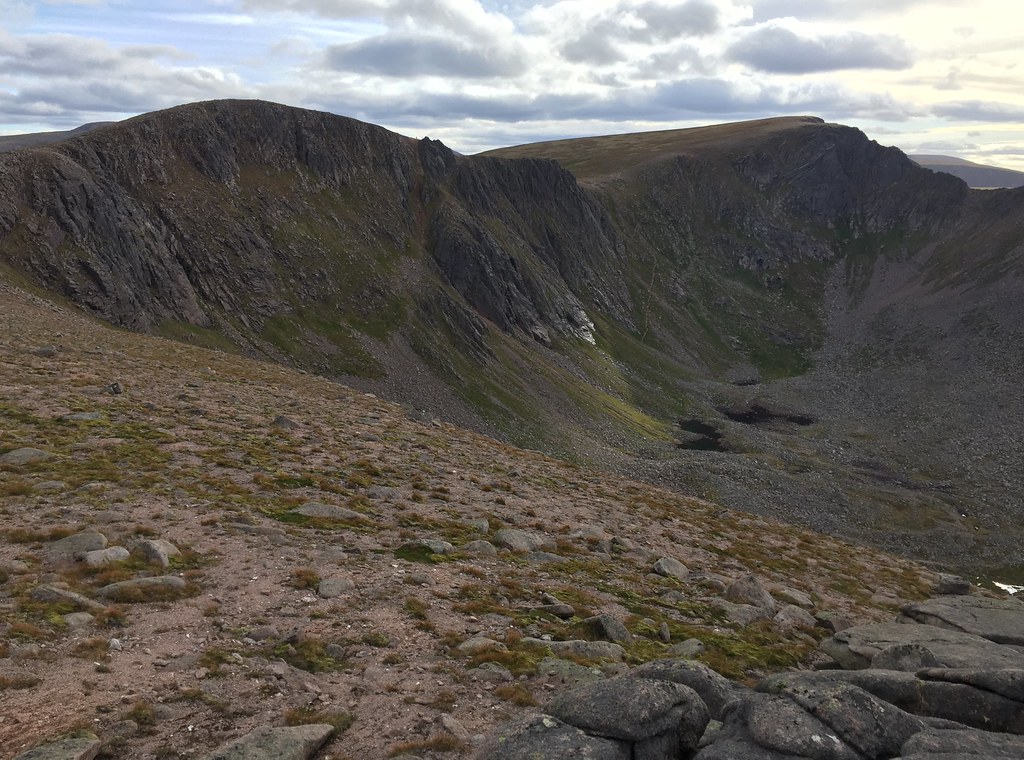 Having descended the Fiacaill Coire Cas, we arrived back at the car wondering if David was around. He has been planning to go out to Beinn Meadhoin today to make up for the time we failed to actually get right to the summit in January 2019, but he had decided to set off way earlier than us. As it happened, I spotted his van and we had a nice catch-up before heading into Aviemore for ice cream. A nice return to some higher altitudes, even if we barely set foot on anything that could be called a summit today!

Brilliant set of photos. They truly capture the very essence of the heart of the Cairngorms.

What a terrible time Jackie has had with Covid - must be so frustrating for her. Hope she is back to full form soon.

Great area for a walk. Stacan Dubha also looking good in the sun.