Why do we write walk reports? Many reasons I suspect, recording a wonderful day on or around the hills, or passing on useful information to others etc. This report sits in both of those categories I suppose, some nice photos, and to record route information which may be useful to others, ie don't do what I did.
Remote, mysterious, playing hard to get, this red balloon had been hanging around an otherwise blue Glen Carron for a while. Another week’s trip to LochCarron gave an opportunity to do something about that. As luck would have it, the day after the long drive from Yorkshire was going to be the best weather for the week ahead (by a distance) so that sealed the deal, no rest for the wicked.
I’d been concerned about parking, hearing and seeing all the post-COVID19 reports, but there was no problem at Craigs at 7:45 am (when I returned cars were parked up the side of the entrance track, so early starts it is).
I was blessed with a bright sunny day, very cool, 3-4 degrees at the car, so no wee beasties despite the absence of wind. I had no bike with me so this was all going to be done on foot. 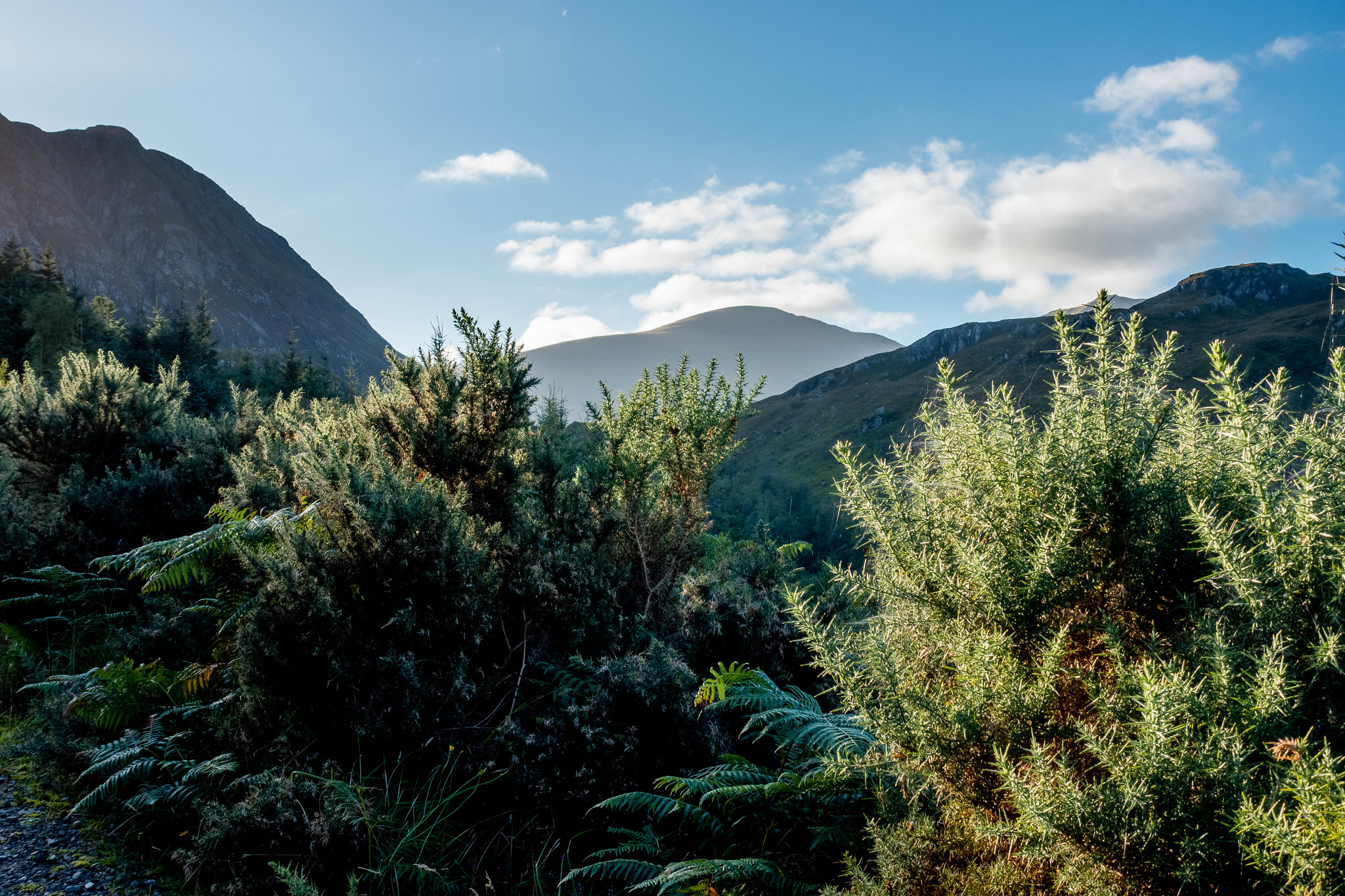 As the track rises through the forest, straight into the morning sun, it’s important to keep looking behind, as that’s where the views are.
Fuar Tholl looking mean and magnificent. 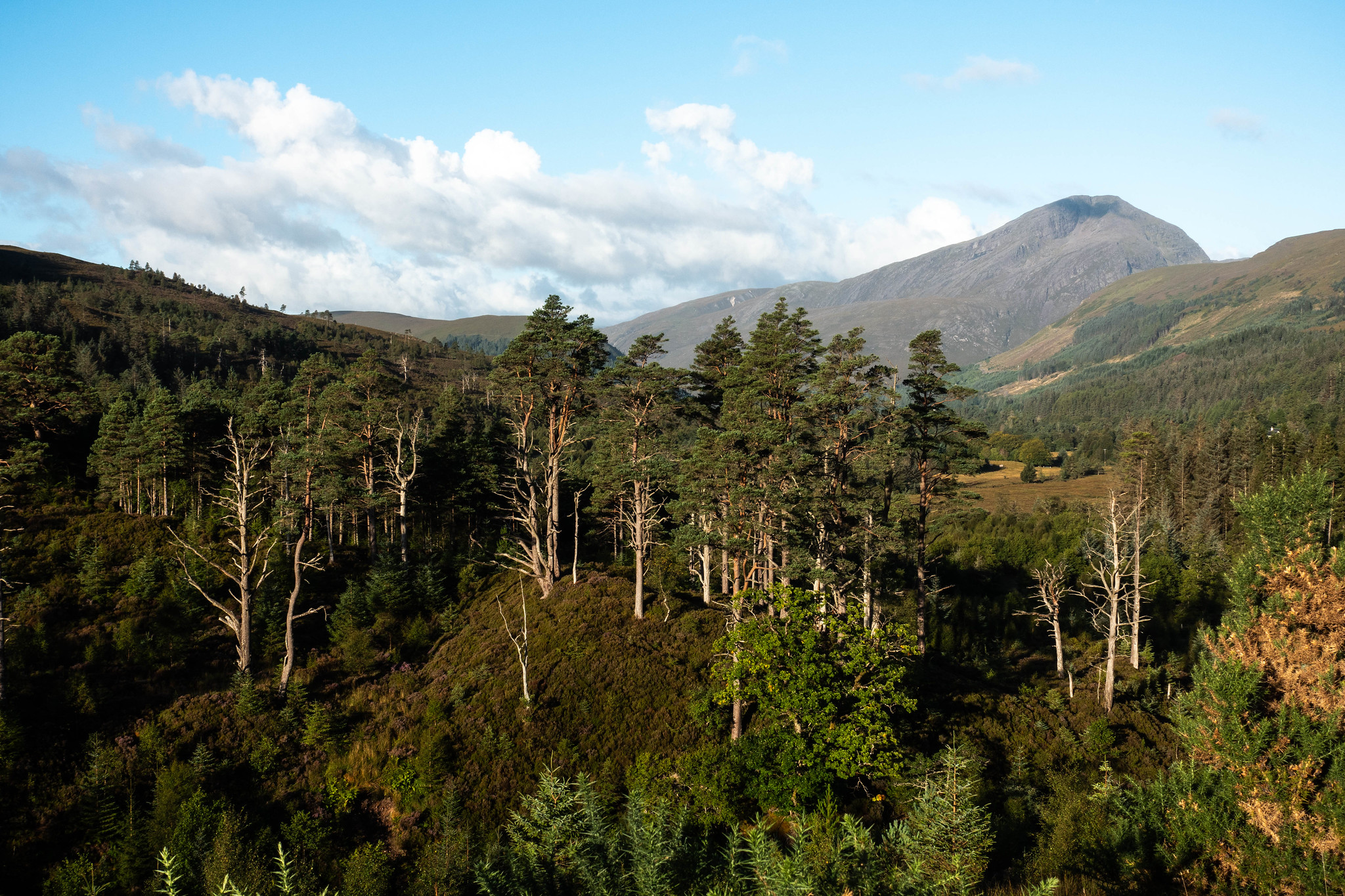 Just shy of 2 miles the forest ends, and rather bizarrely I started to hear the faint sounds of a recorder being played, somewhere on the hillside. I spotted the musician amongst some rocks on the right, gave a merry wave, and resisted the temptation to ask him why he wasn’t allowed to practice at home.
The Sgurrs came in to view, reminding me of a very tough day on them, over a year ago, in fresh April snow and high winds. The descent off the mountain had been particularly tough, slipping around on melting snow patches, with unconditioned legs as useless as jelly. 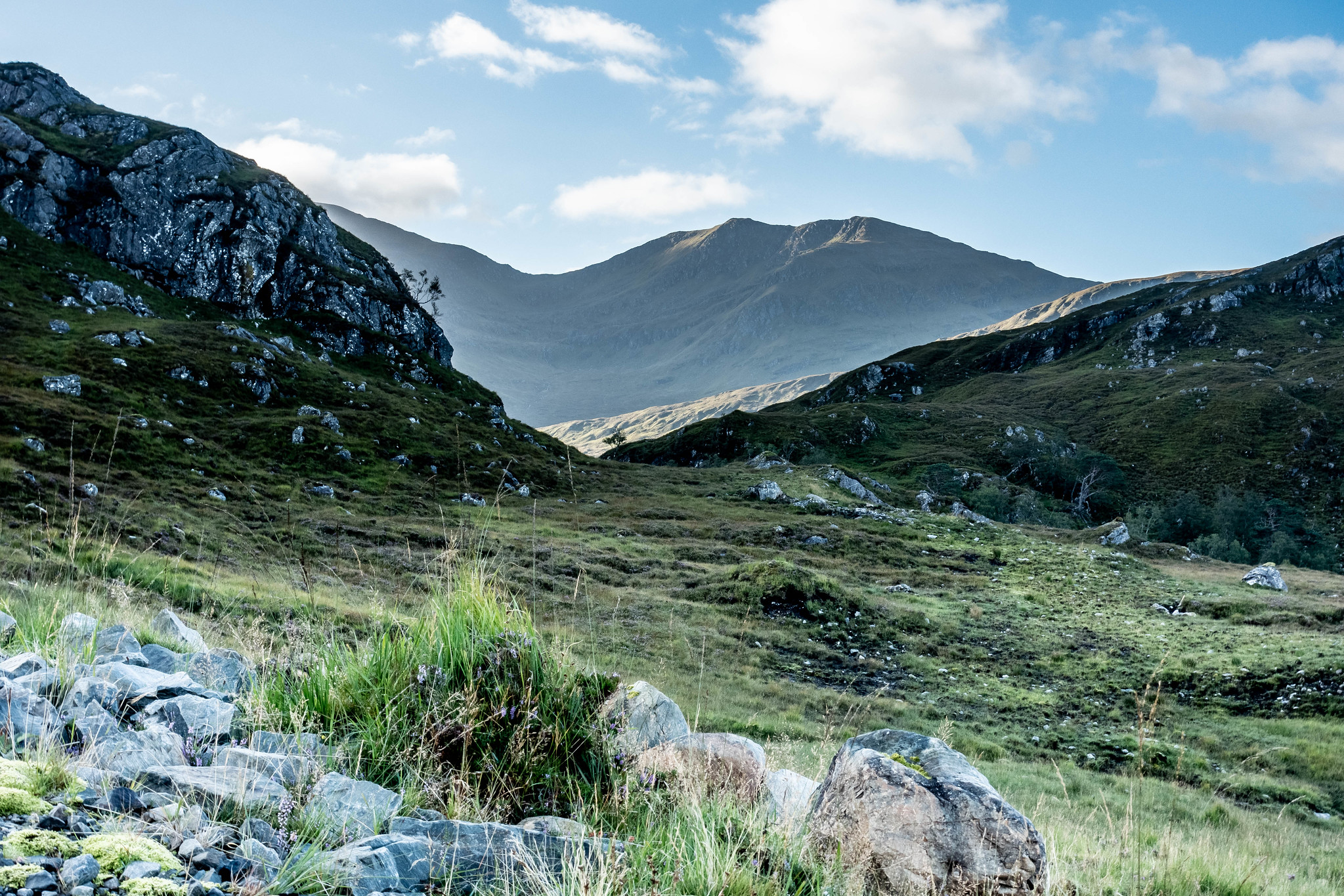 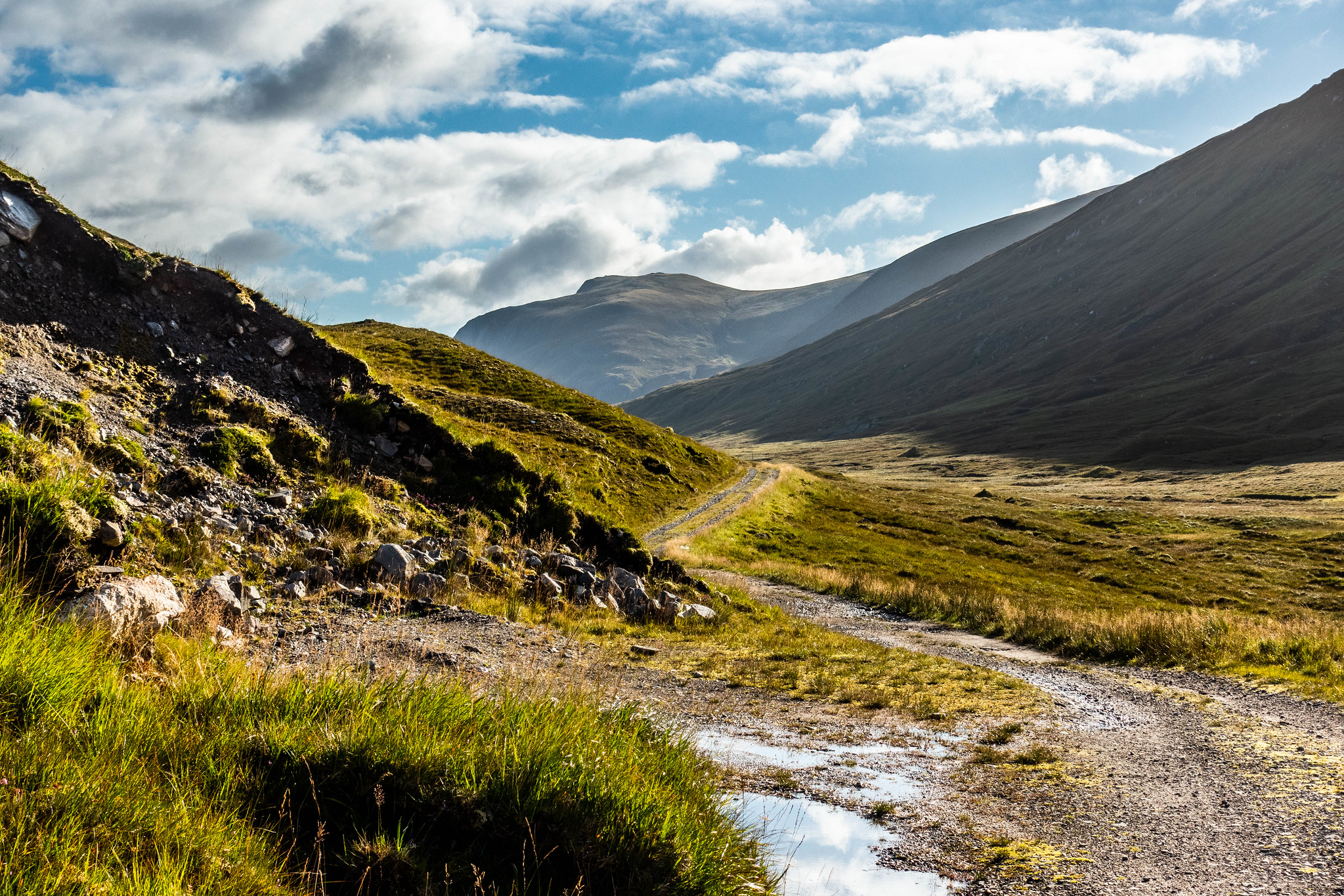 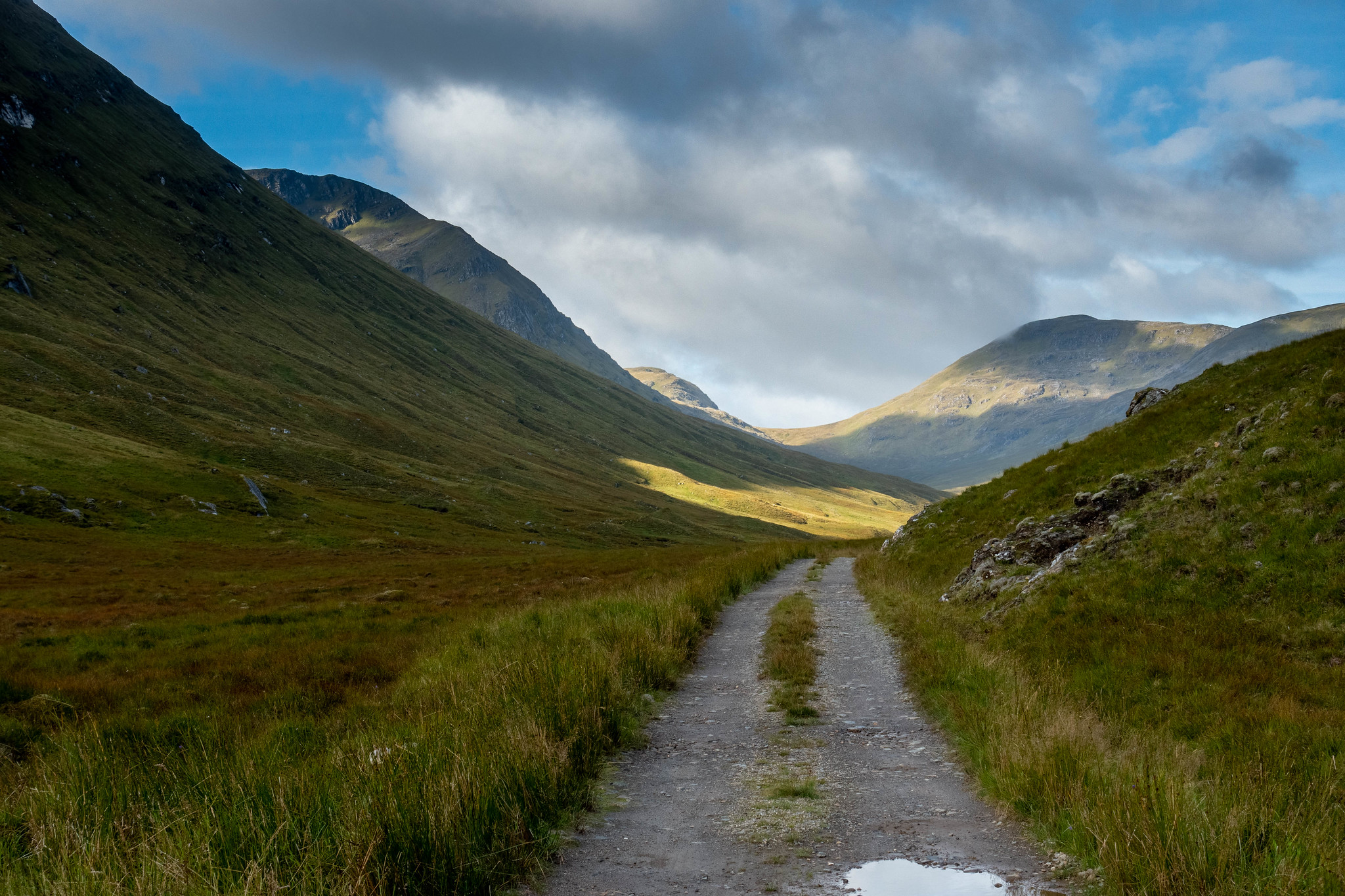 I was passed by four ladies cycling in to Glenuaig Lodge. The WH route I had downloaded didn't go so far, but left the track after the plantation, about 600 m shy of the lodge. Actually it didn't. Nothing left the track at all, just a rolling expanse of boggy ground, with a deep stream cutting through it. I turned back at the stream and returned to the track and made for the lodge, which another group of three chaps were heading for.
From the lodge I used the rough track down to the first river crossing 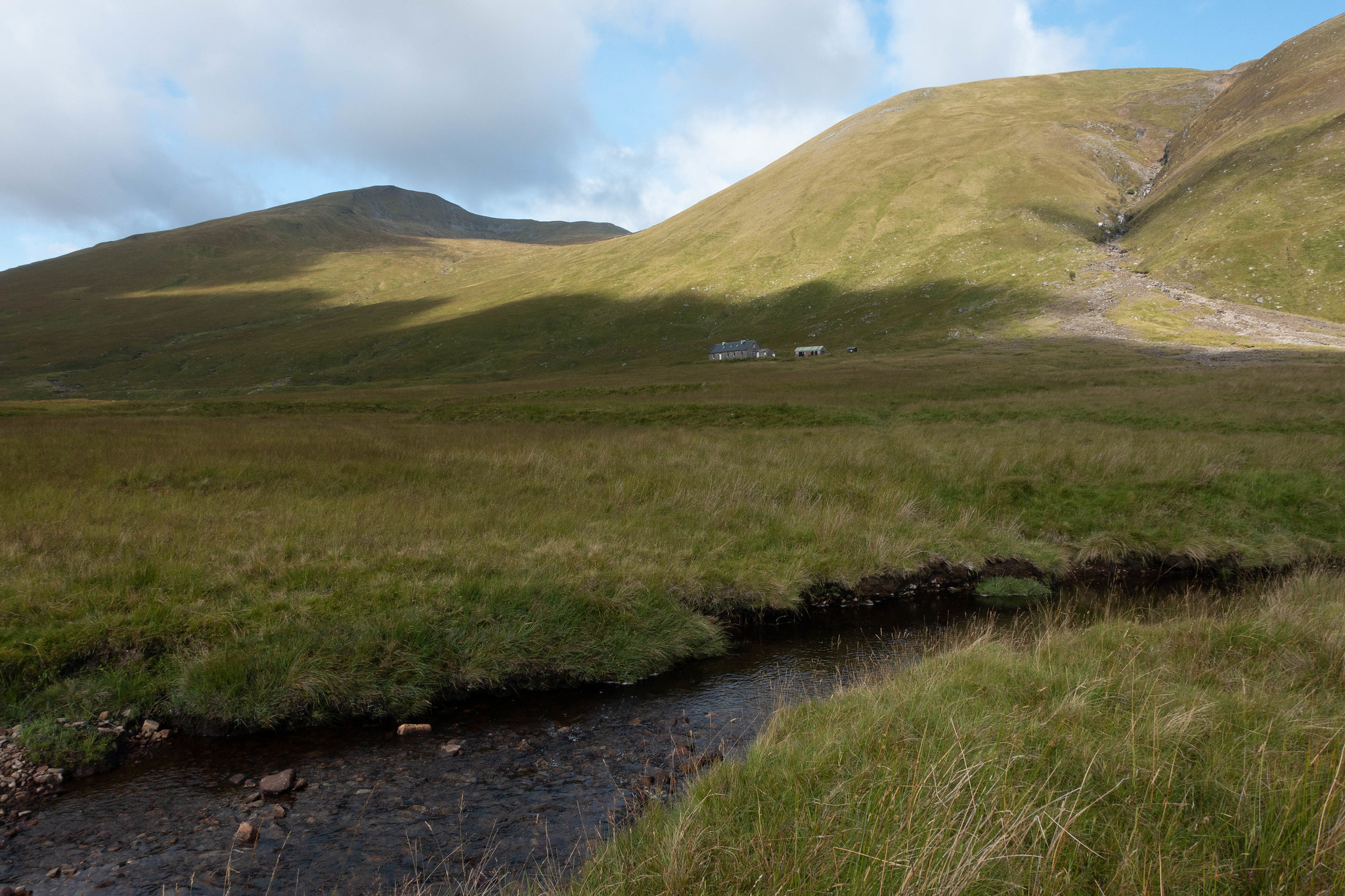 Then cut across boggy ground again, and again, again ... finally coming to the confluence of the An Crom-allt and Allt an Fhuar-thuill Bhigg burns, which were cut into deep waterfalls. Both were meant to be crossed to gain access to the shoulder of Carn nan Fiaclan according to the WH route. 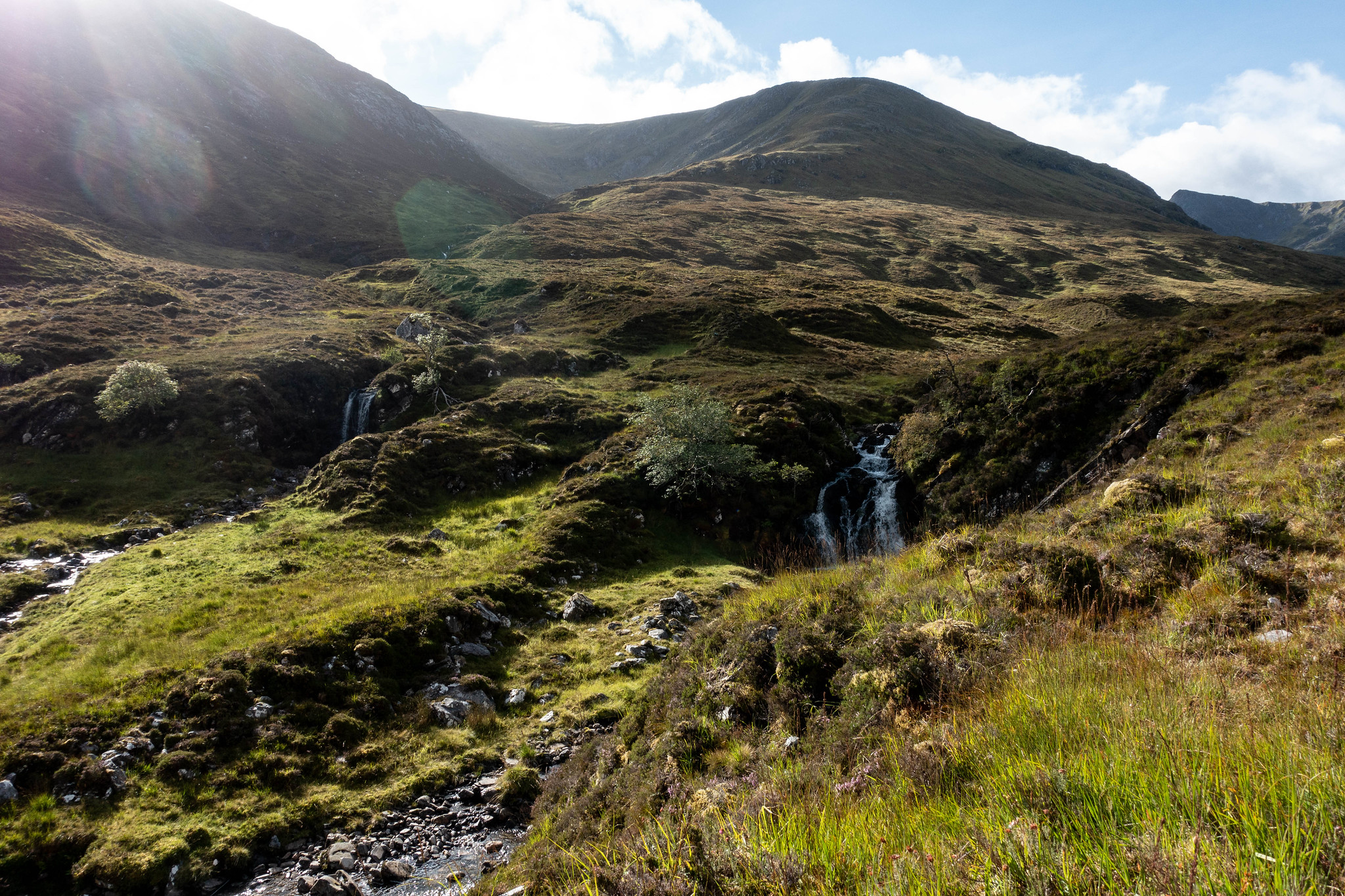 I struggled personfully to get across the first, the An Crom-allt, and at that stage made a decision to ascend by a different route, the NNE shoulder of Fuaran a'Bhuilgich, suitably pathless as I was to find out. It looked fairly straightforward from below, the sun was shining, how hard can it be? 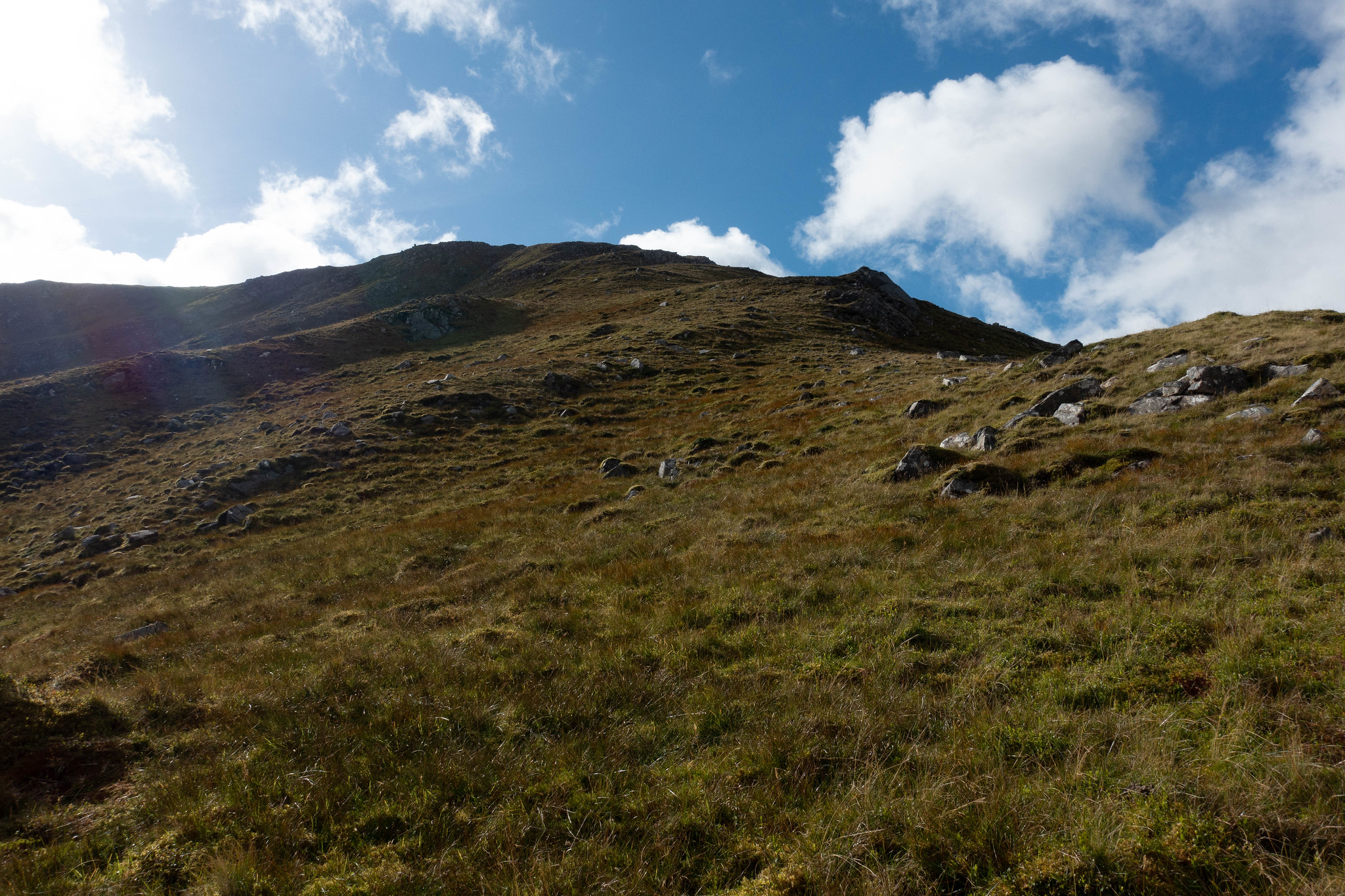 Very, as it turned out. Steep, pathless (did I mention that?) and with some tricky rocky strips cutting across higher up, I rapidly replaced blood plasma with lactic acid, and felt a bit cardiac to say the least.
Looking back down: 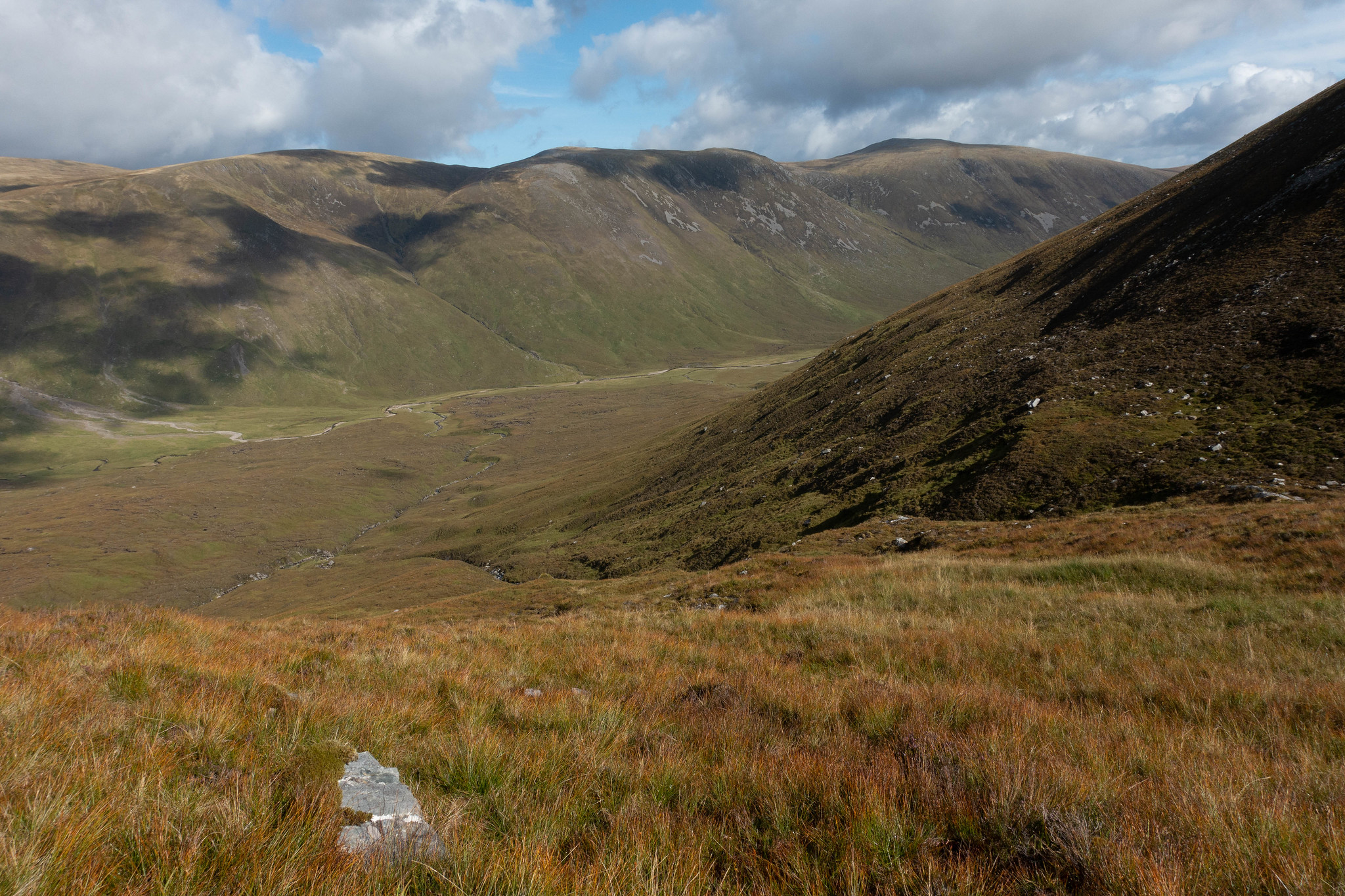 Towards the top I was scrabbling up holding onto tufts of grass and loose rocks, eventually just grateful to reach more level ground at the top. I would caution against going this way, and it also adds on an extra km or so to the trip. However the views were really opening up now, a stunning day: 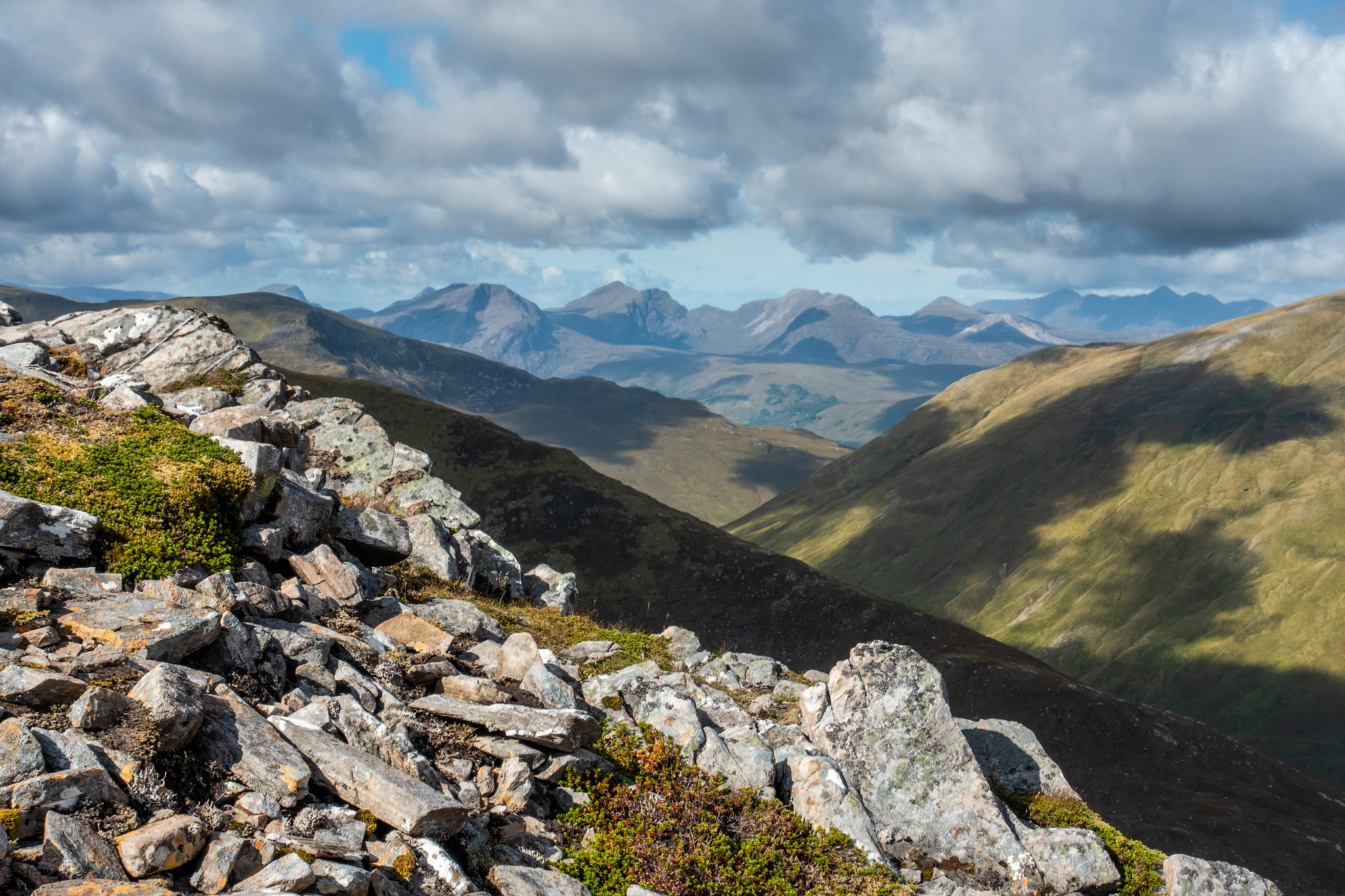 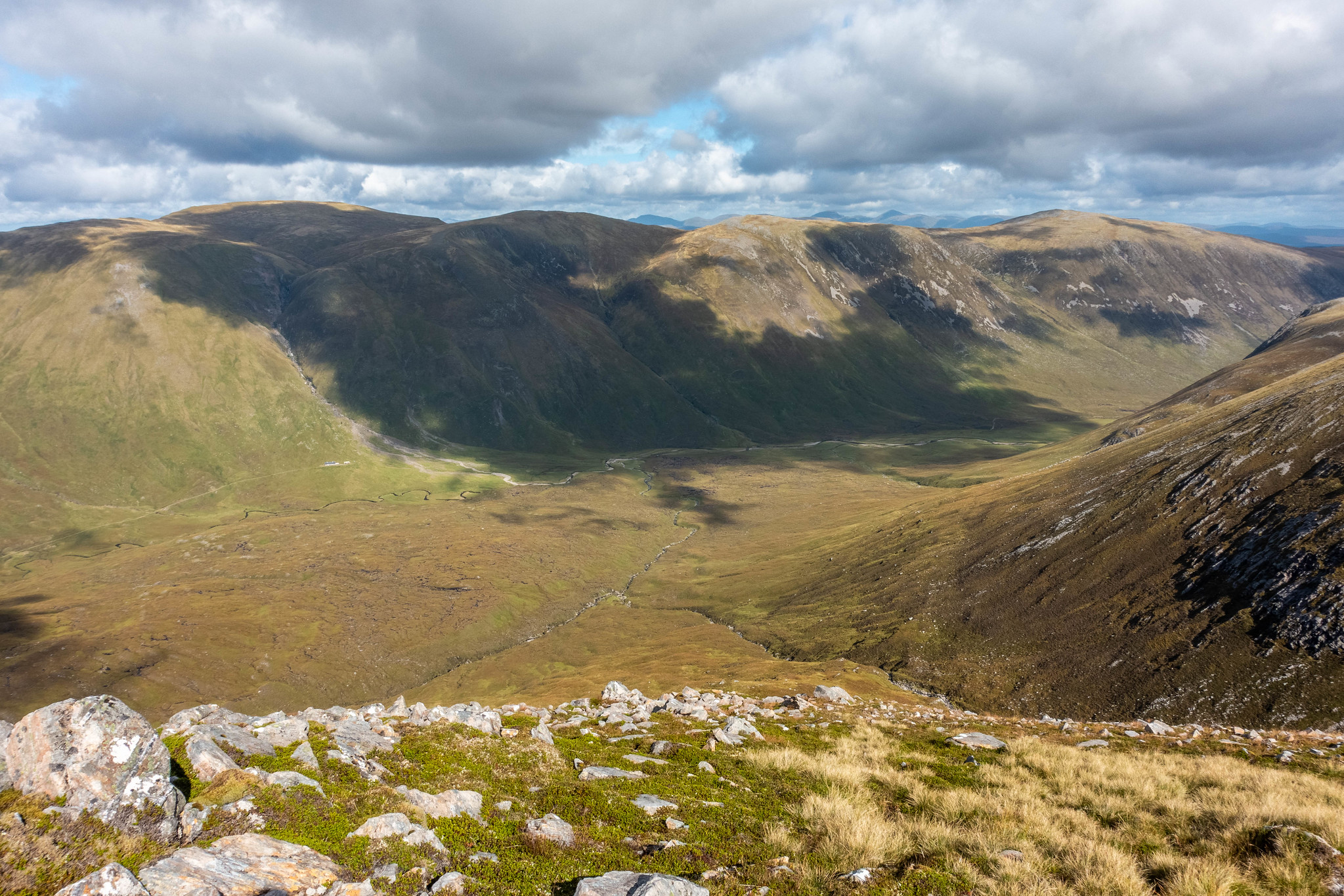 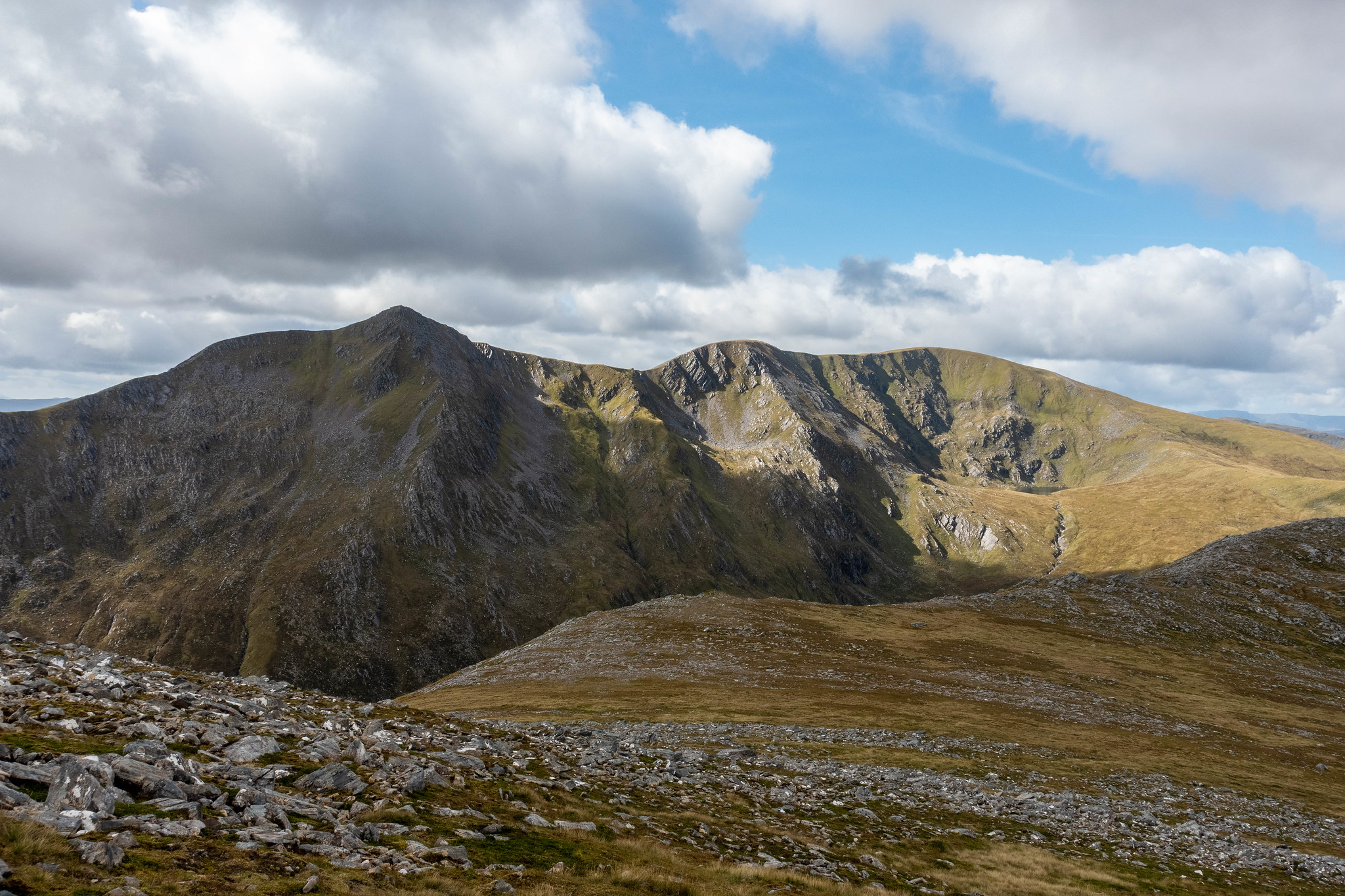 After recovering with a slice of Boss's flapjack I made my way over the top of Carn nam Fiaclan. 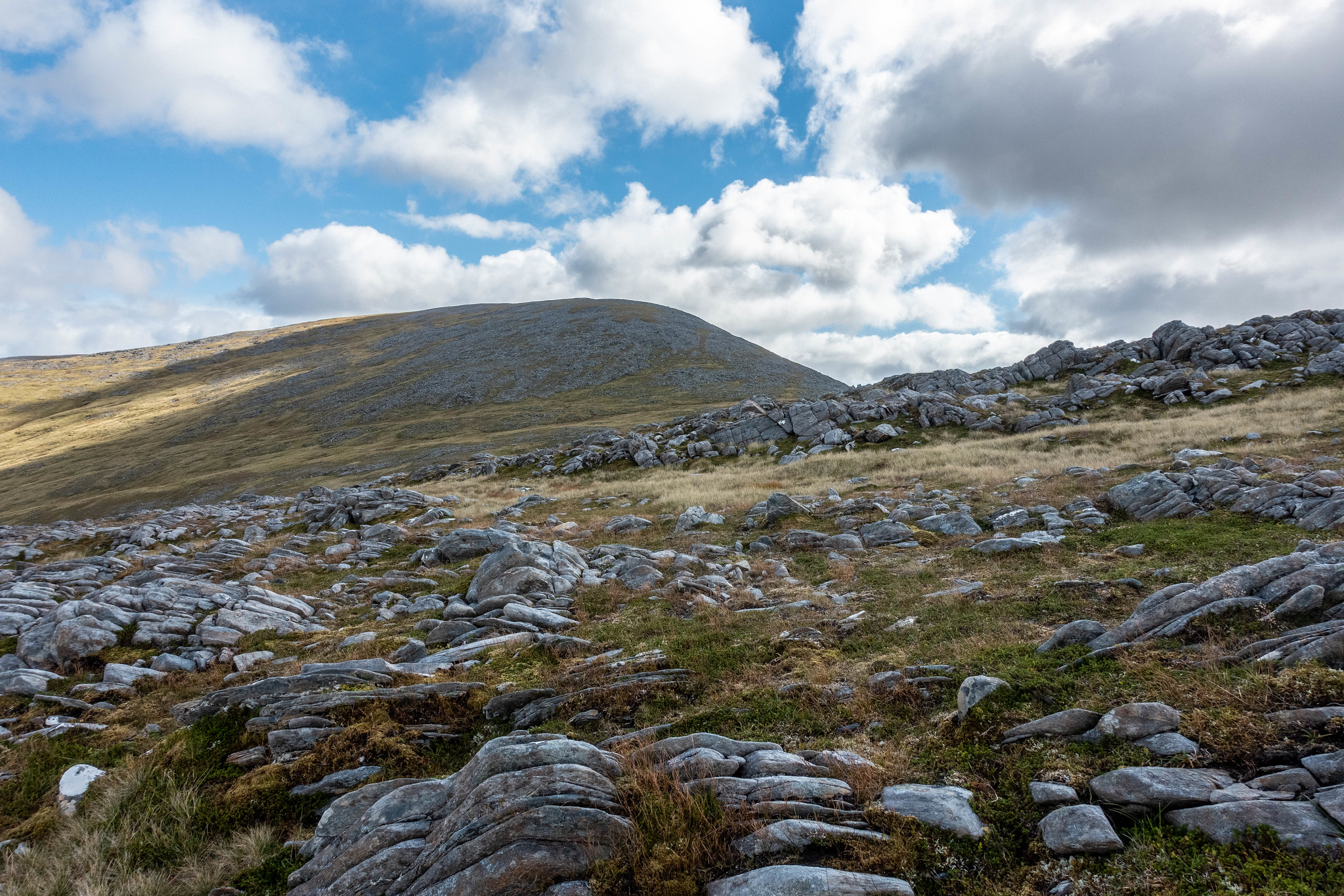 on which I bumped into the three friendly chaps I'd seen earlier at the lodge, who were making their way to the Sgurrs. They told me my descent route was easy with a path further down (ha!), and that the cycling ladies had been up and were going back down the same way, encouraging news.
After this point Maoile Lunndaidh truly delivers it's punch line as the view down onto the coire of Fuar-tholl Mor suddenly comes into play, definitely the visual high point of the day. That's why we do it. 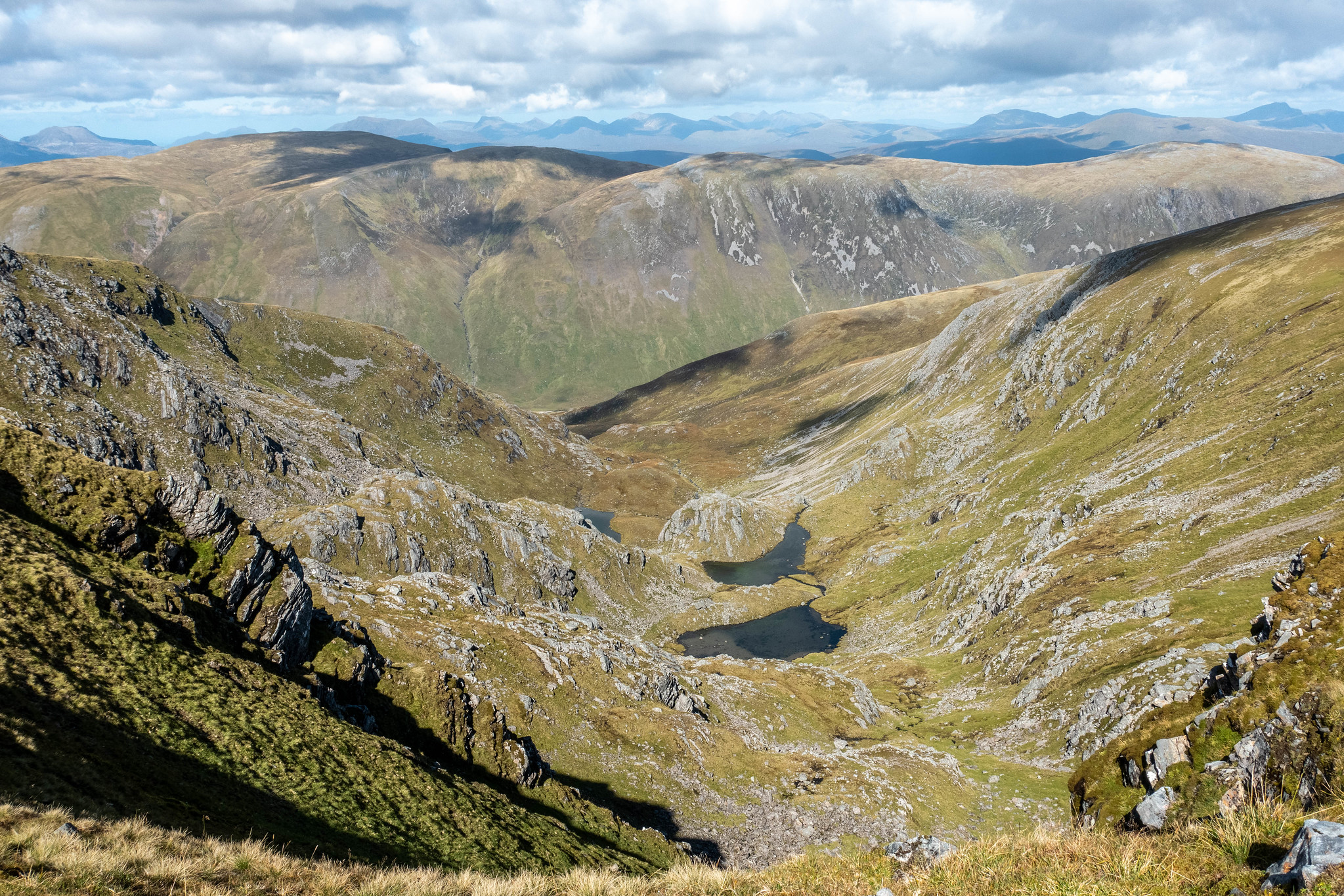 Then onwards to the actual high point of the day at the small cairn of Creag Tholl a' Choin, which (I think) marks the true summit, being a whole 4cm higher than the one marked on the map, some 600m further on. 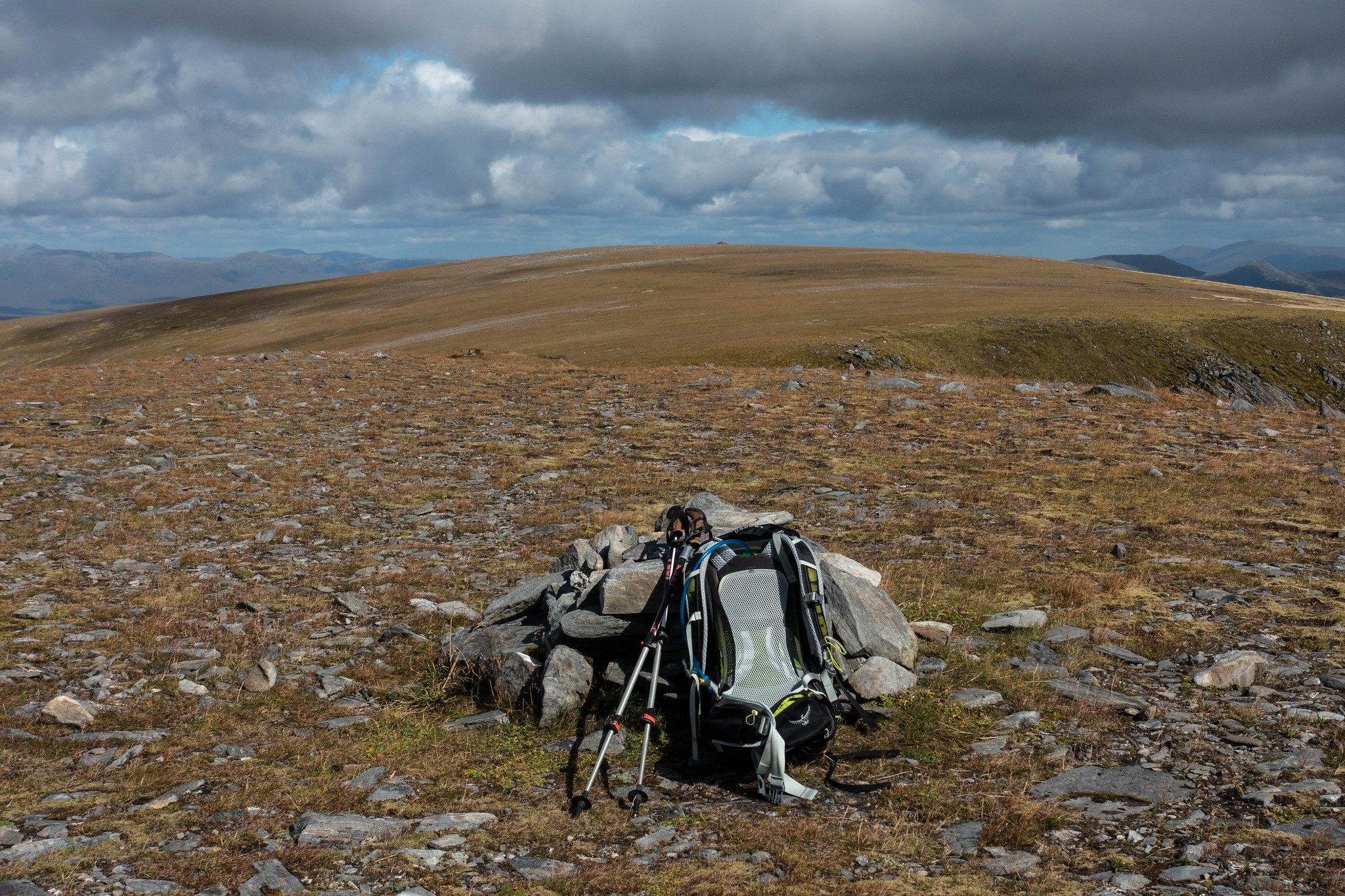 This route takes you over both anyway. 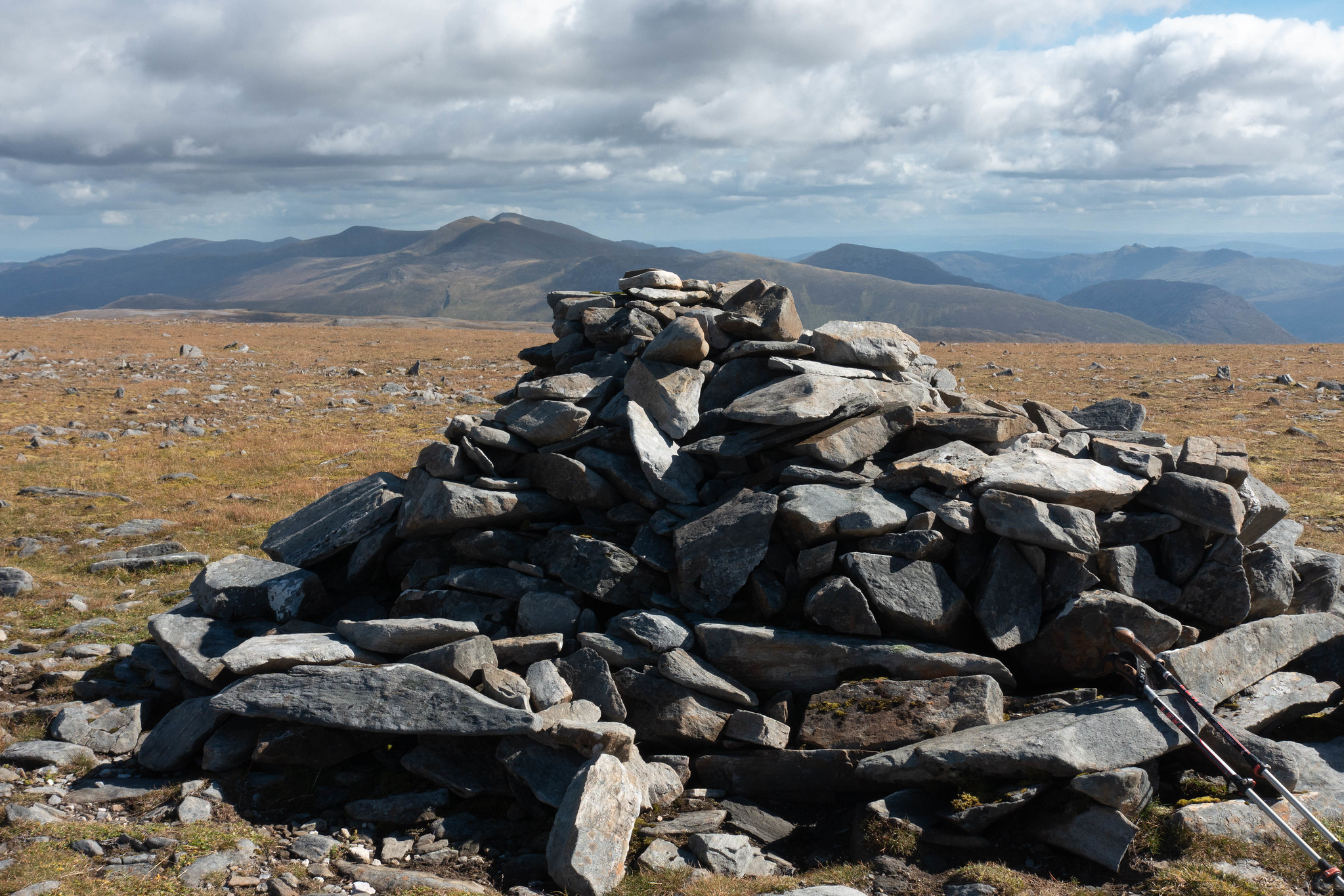 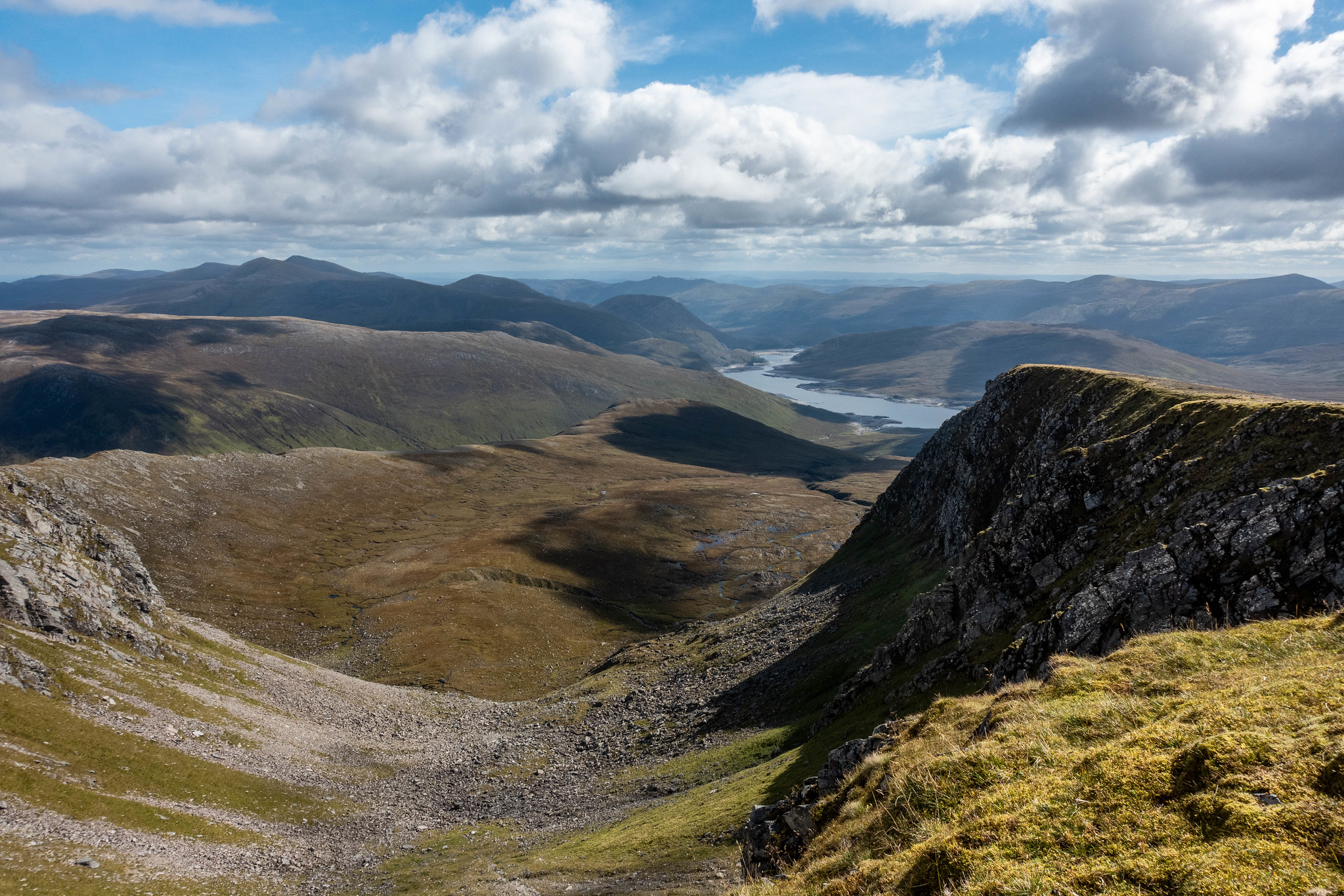 And over to Torridon:

The descent starts pleasantly enough with a a gentle drop over the shoulder running NNW from the big (non-summit) cairn, 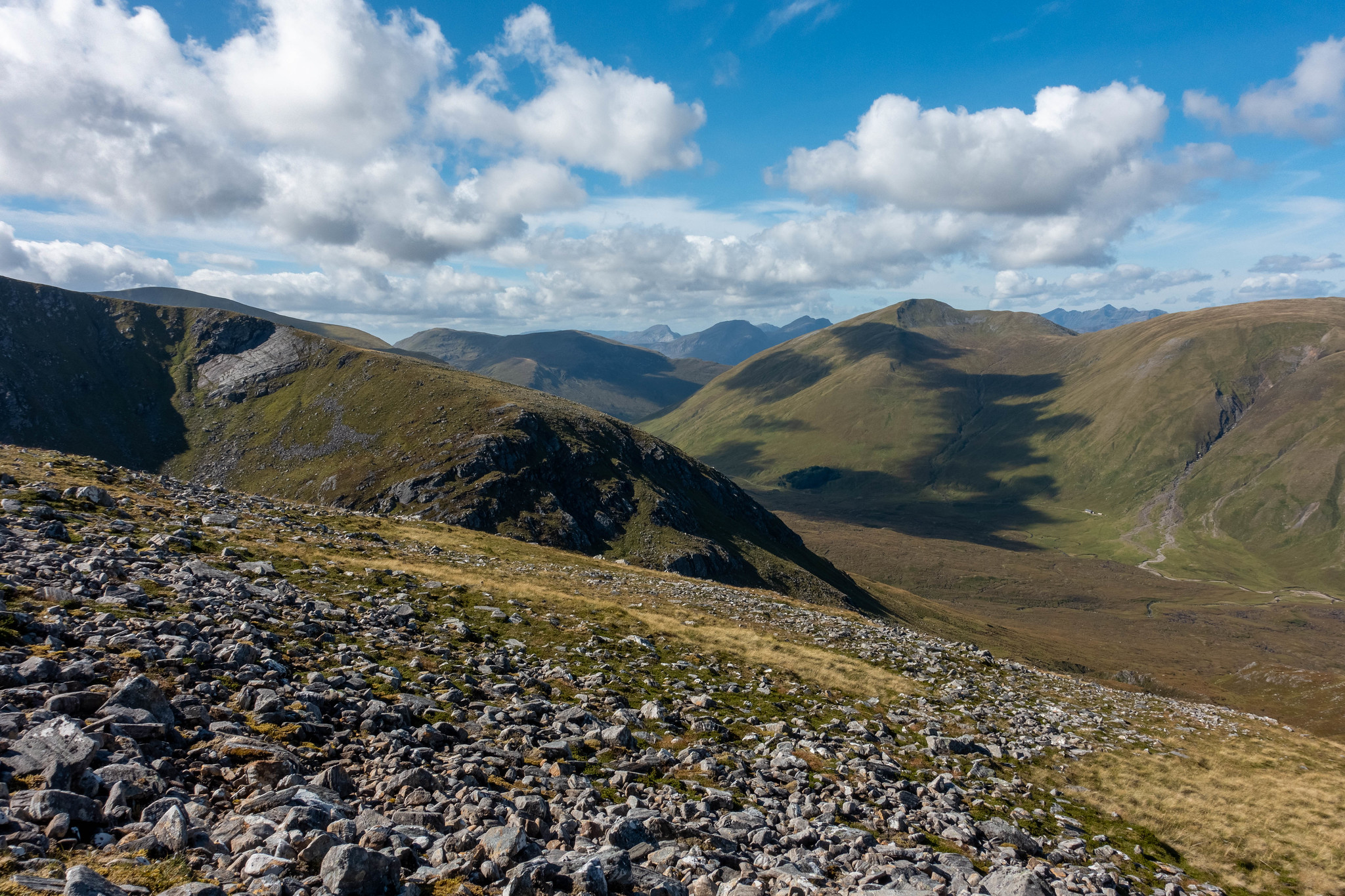 becoming a little trickier with much picking over boulders, aiming for a point where various burns and waterfalls meet at the entrance of Fuar-tholl Mor. 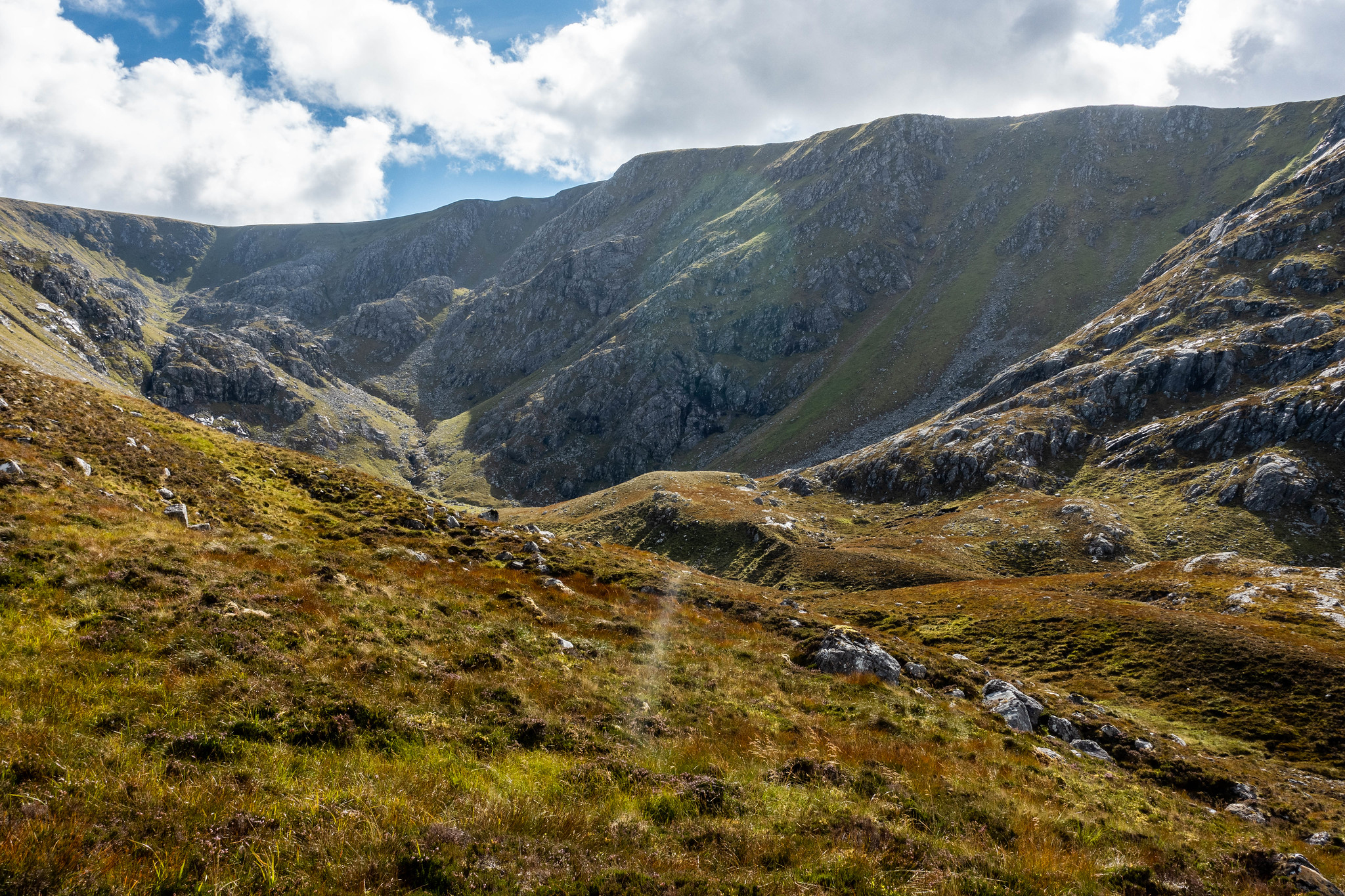 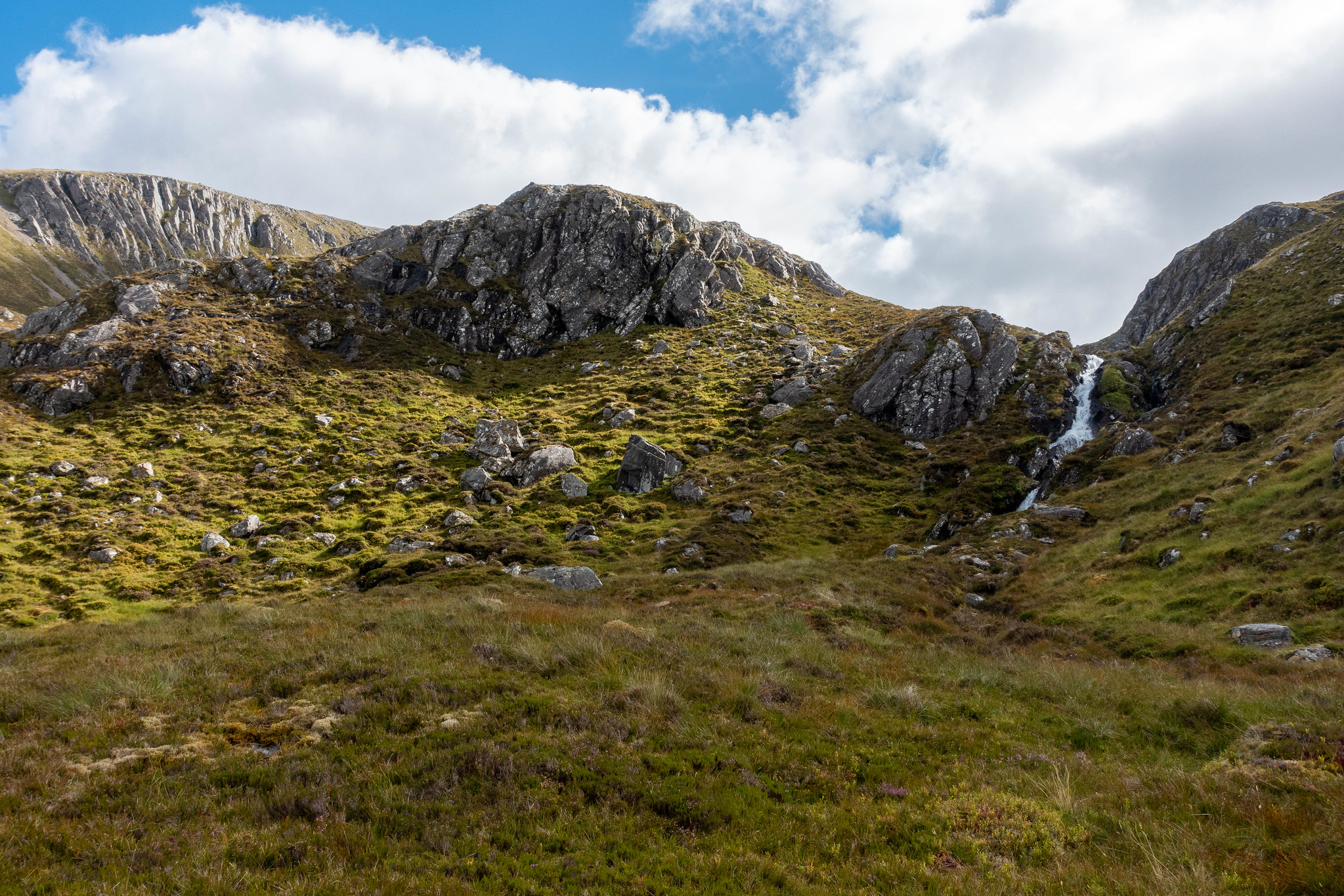 Sounds easy enough eh? In fact I couldn't see the promised path and just picked my way down over rocks, bog and heather.
After picking my way across the burns, and admiring the waterfalls above I had to decide whether to follow the WH route which traverses the hillside to bring you back to the waterfall crossings and boggy traverse. Somehow not very appealing, and given that it seemed relatively straightforward to make a direct line to the Lodge, that is exactly what I did.
Looking back up, the descent route comes down the shoulder in the middle:

Yes, boggy in parts, but far better than earlier in the day, and the two river crossings were far easier than crossing at the waterfall. Definitely the way to go in my opinion.
Looking back at the shoulder I used to climb up earlier in the day: 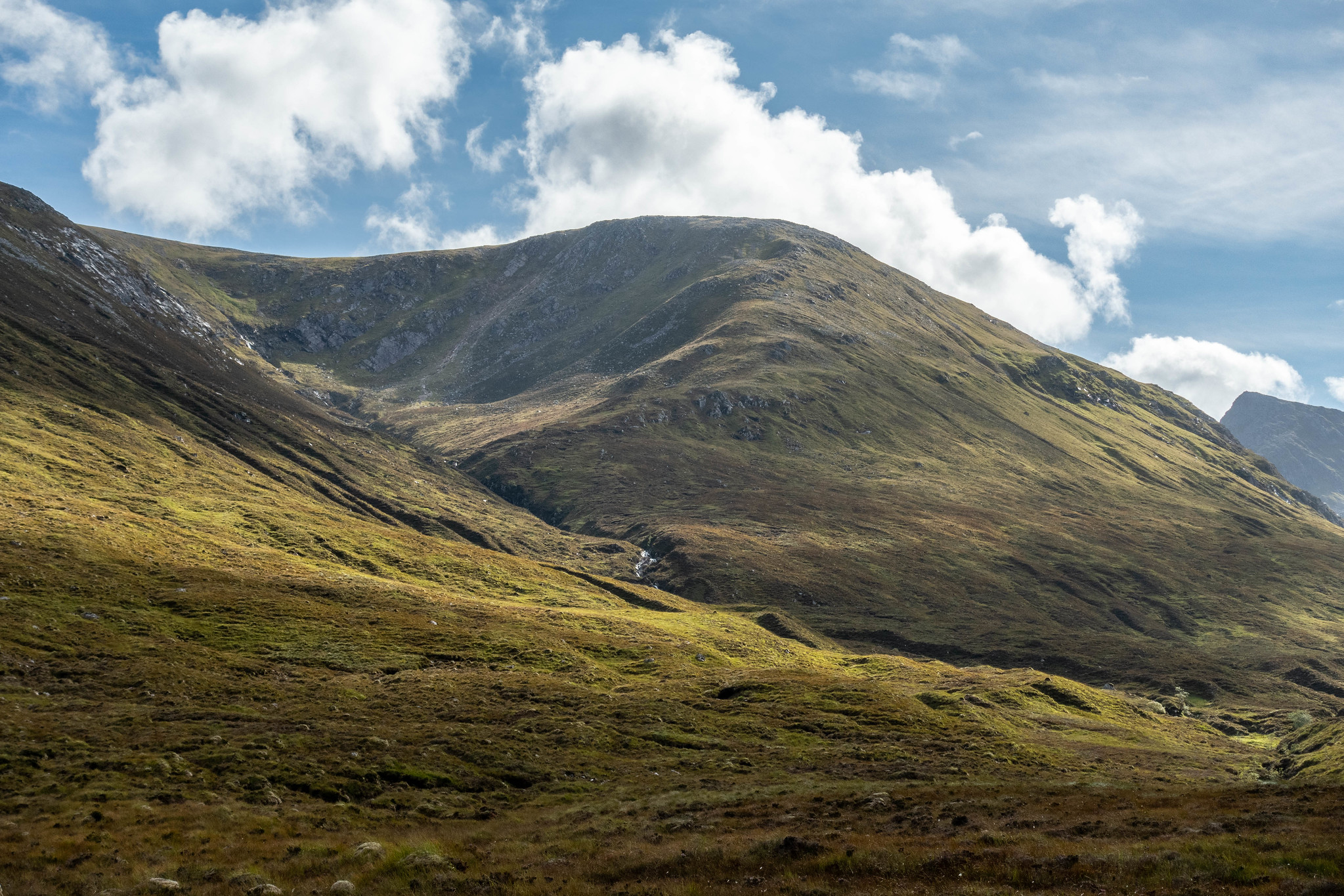 Pano of the whole mountain, ascent route on the right, decent on the left. The WH ascent route goes up the middle shoulder. 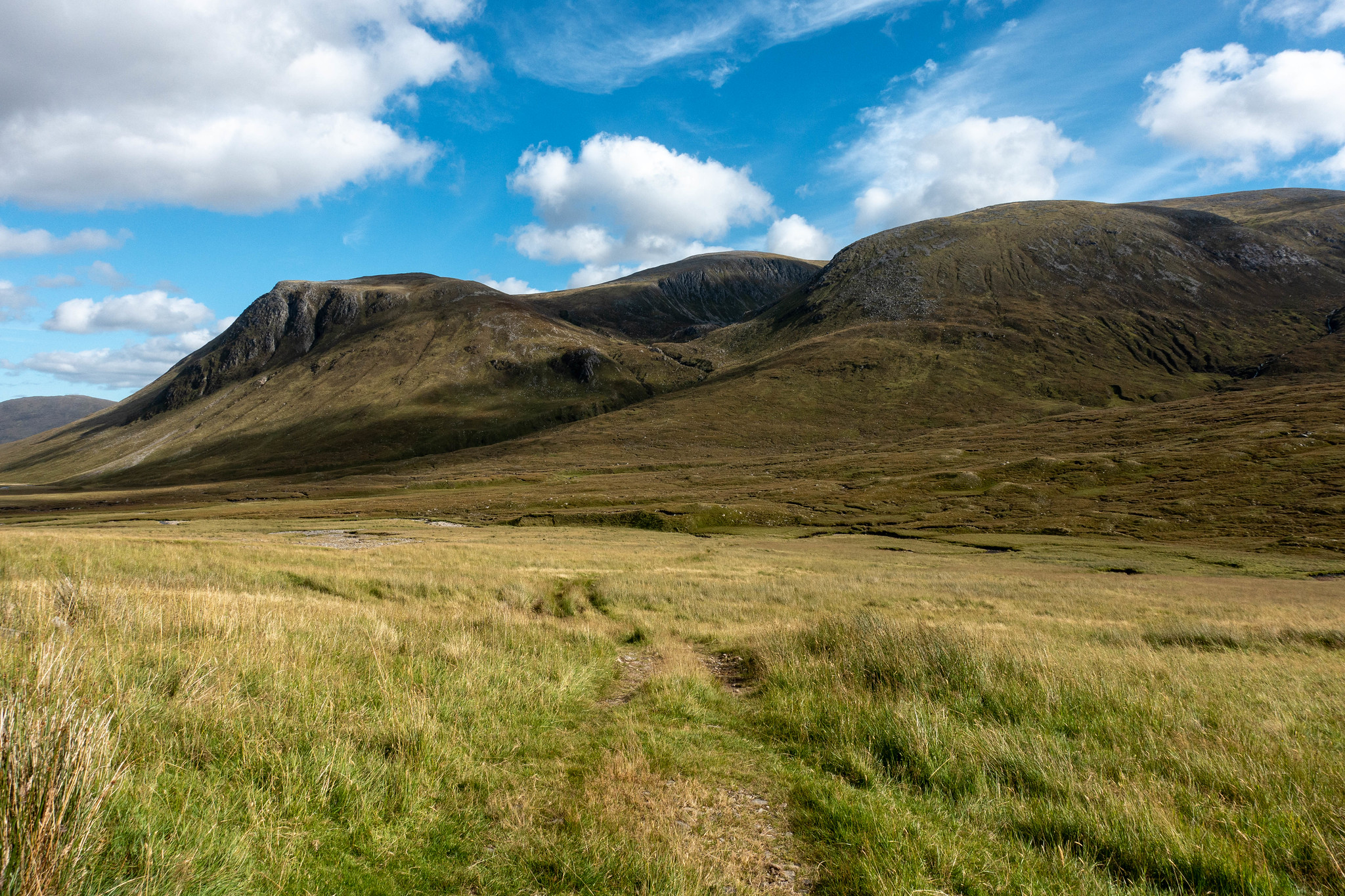 After regaining the track at the lodge just the little matter of the long walk out, but somehow it seemed to go quickly. Towards the end the blue skies of the day were developing high grey cloud, a portent of the washout that was the next day to come.
In conclusion, it is preferably to go to the Lodge, follow the vehicle track down to the first river, cross it, and strike off from there to your chosen ascent route (don't do the shoulder on the far right like I did). It seems like the up/down option utilising the WH descent route is getting popular - just make sure to go to the true summit, it's easily spotted, towering 4 cm above the larger non-summit cairn.

Think it’s the only Munro where the Munro summit isn’t the highest point on the hill (certainly according to hill bagging). Myself and David Main followed the right hand shoulder up but don’t remember any scrambling

Backpacker wrote:Think it’s the only Munro where the Munro summit isn’t the highest point on the hill (certainly according to hill bagging). Myself and David Main followed the right hand shoulder up but don’t remember any scrambling

Not really scrambling, just a very steep climb and working the way through small rock bands.

Well done Jonathan, done this hill with the 2 Sgurrs the first time and the off route was the same as yours, which was steep but decent and the path was patchy. It was a bog trot to the Lodge path/road. We had left bikes at the wire bridge to the Sgurrs so the exit was pretty quick.

Oh and your trip to the Sgurrs, well I remember that day well When we caught up with you guys.🤣🤣🤣

oh lovely, you certainly got the views which were absent for us the previous week. In all I think there was about 50 metres of useful path

I'm in the camp that likes useful route tips in walk reports, so appreciated yours as this is one of the 2 munros I've still to do down Glen Carron. I've heard crossing points etc can be tricky if you make a poor route decision...!

Nice report and pics.
It's a rather isolated peak and you can't really combine it with anything else. In the 1980s you could drive up to the top of the forest

which we did for the Sgurrs, but not in 1999 . However I was lucky to meet the ranger in his landrover at the gate and get a lift for about 8km

: Saved me a couple of hours I guess. He also picked up two others going to the lodge