After 3 days based in Keswick and ventures into the Northern Wainwrights with not much to see from the tops because of clag.

My pals and I decided to venture down to Wasdale in the hope that the weather would be a little more cheerful to the south of Lakeland.

We decided it was best to travel via Cockermouth and Egremont, rather than the up hill and down dale route by Hardnott Pass. The day started dull as ever in Keswick however as soon as we reached the A595 the cloud lifted and the sun shone and indeed it shone all day.

By the time we arrived (it took about 1 hour 30 minutes) the car park at waWasdale was pretty full with lots of walkers preparing to venture out on their chosen route for the day. I myself had never approached the Pike from this direction on the other occasions I had summited I had travelled from Seathwaite from the north and was therefore pretty excited about the trip towards Scafell Crag and the scramble up Mickledore. It looked thrilling the view towards the magnificent Scafell was like a magnet saying 'Come and get me'

So with our boots on and wearing only shorts leeves we headed on our way,very suprisingly most walkers were heading towards Mosedale in the other direction. This in itself looked wonderful with Pillar looking most attractive in the sunlight, however not today we were heading for the roof of England and no doubt the crowds as well 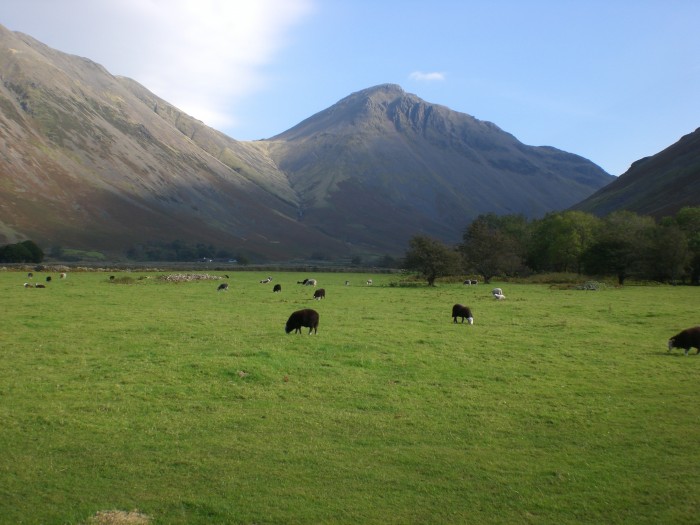 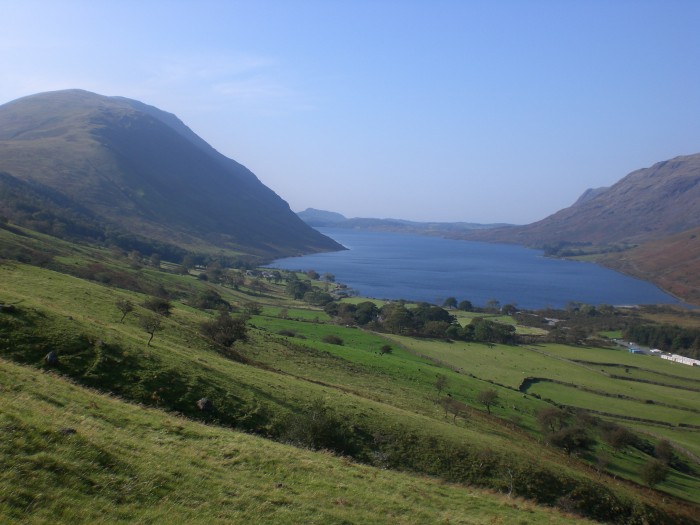 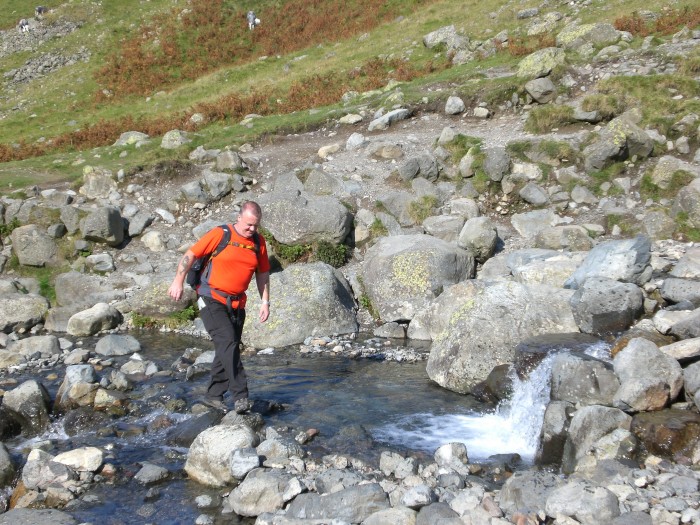 Waiting for Terry to fall in!! 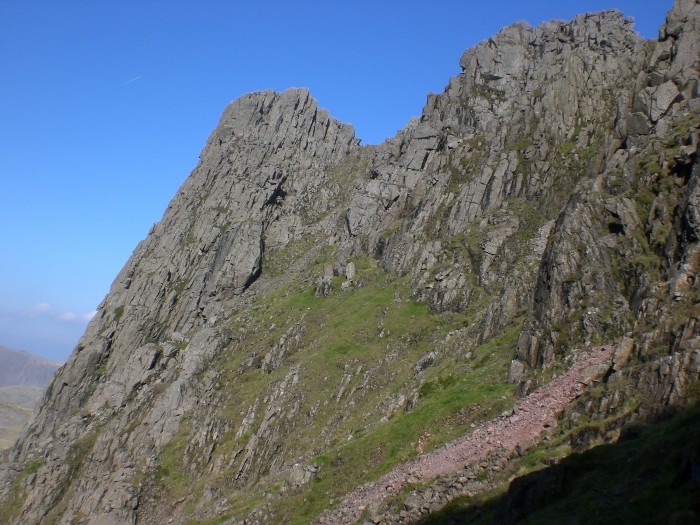 Pulpit Rock with Climbers near the top left. 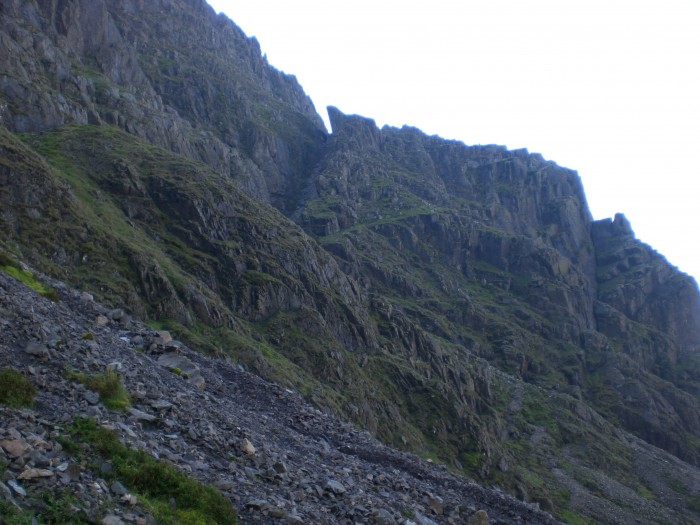 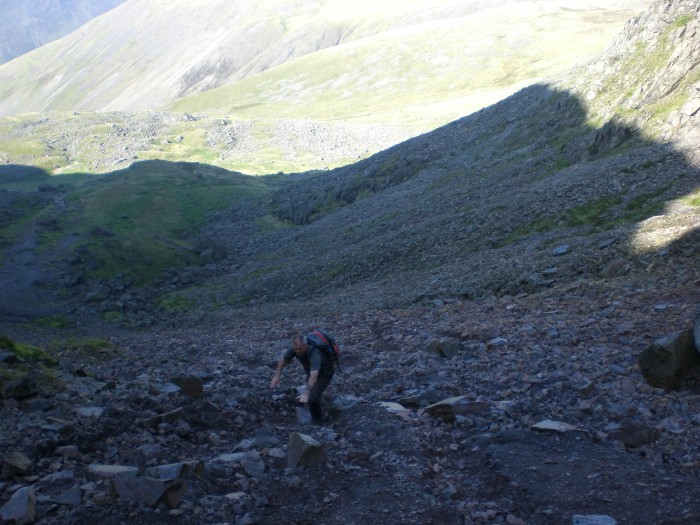 Paul battling up the scree at hollowstones 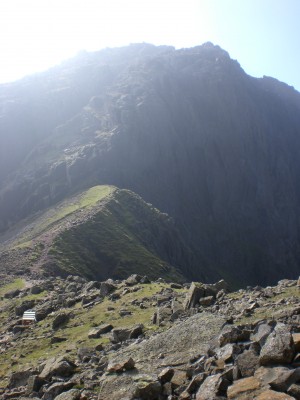 It was very hard work clambering over the scree via Hollowstones and the scramble up to Micldore was tricky and much care was needed here due to the wet and crumbling rock. Never mind once over this obstacle the view opened up with the barrier of Broad Stand to the right and Scafell Pike summit in the distance to the left. The way is certainly clear with many many cairns, I am not sure Mr Wainwright would have approved of the shear number of these ugly markers. 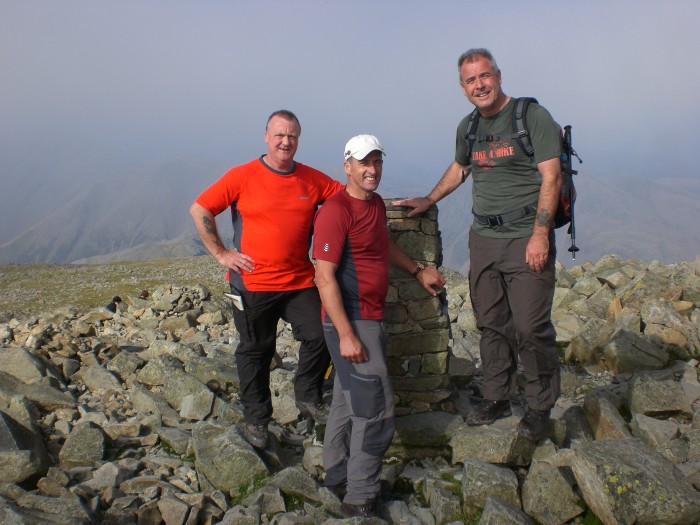 Having reached the top it was hard to find a place to rest and have a drink due to the many people here all enjoying the beautiful sunshine. We eventually found a place and watched people come and go by the many diferent routes of accent and decent. I had decided to try and avoid the crowds and return over the top of Lingmell with a look at Piers Gill from the summit. I was hopeful that this way would avoid the crowds. I was really suprised that there was quite a number of walkers who were unsure of how to get down from the summit. Quite worrying really, any mountain top can be dangerous and Scafell Pike is no exception and certainly deserves more respect than it recieved today 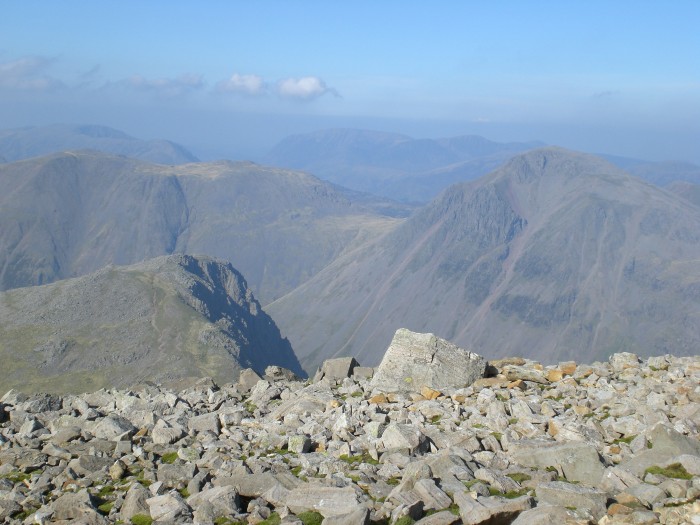 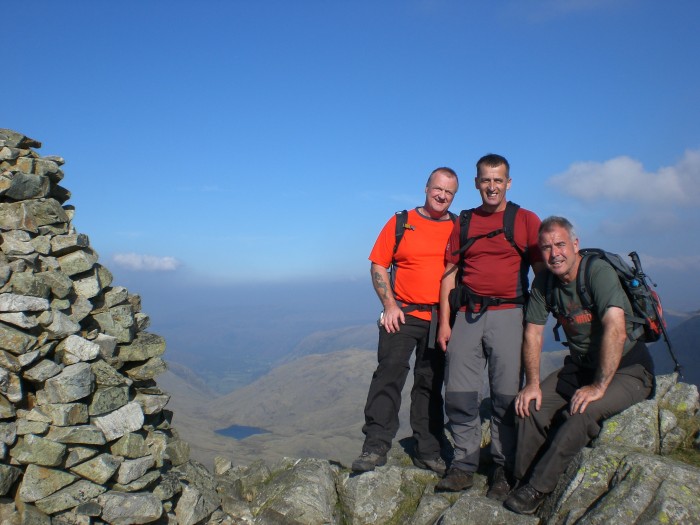 Having reached Lingmell and yes avoided the crowds

there was that magnificent sheer 300 mtr drop down to Piers Gill, it is scary

A steady walk down the ridge of Lingmell via Goat Crags was the way down to Wasdale with no crowds, however it is a steep dissent and the trusty walking pole came out to assist.

All in all a great day and finished off with a pint in the Wasdale Inn.

Nice report Luvhiking, great weather too.
There was no chance of you getting the summit to yourselves in that sunshine.

First time I walked Scafell Pike we were camping at the NT campsite the very first year it opened; late 60s I think! We did the slog up Brown Tongue and returned via Styhead. In the past 2 years my husband and two daughters have made three attempts but been foiled by the weather each time; they should have been out with you

Luvhiking wrote:there was quite a number of walkers who were unsure of how to get down from the summit

Don't go thinking the Pike has any less people on it when it's wet. Did it last August in very poor visibility and was staggered by the shear numbers at the top. It was midweek as well

There was no chance of you getting the summit to yourselves in that sunshine.[/quote]

Yes I was very lucky with the weather on that day, it was certainly a good move to travel down from Keswick which was deep in clag!!

Just shows how changeable the weather is in different parts of lakeland on the same day[quote="skuk007"]Nice report Luvhiking, great weather too.

Nice report,you certainly got a lovely day for it & some cracking photos too. Was in Wasdale myself for 4 days from the day after you were there,Thursday & Friday were glorious but by Saturday evening the rain came so ended up spending the rest of the weekend in the Wasdale Head Inn! Love the summit of Lingmell,some really gnarly crags up there & the view down Piers Gill,as you say,is slighty scary but pretty spectacular. Descended via the path next to Piers Gill last time i was up there,well worth a look.

Thanks M M, my wife Carol has yet do do the pike, so that looks a great way to decend. That Gill is scary tho, she may think I want rid