I had actually hoped this was going to be a report of MrsR’s first Corbett. Following the recent excellent reports from both Stretch and Gammy Leg Walker Ben Vrackie looked to be the ideal choice for her first Corbett as it looked fairly straightforward as an introduction hill for her, but sadly it was not to be

Hopefully though that day won’t be far away

We had been down in Sussex for the weekend spending time with my two young boys and when my alarm went off at 5.00 a.m. on Monday morning she was feeling less than enthusiastic on account of arriving home on the Sunday evening at around 10.45 p.m. after the 500 mile car journey back up a selection of the Country’s finest motorways.

Given a slightly later start though, and the last minute change of plans, I was looking for something less strenuous than I’d been used to just recently. So the route of choice was A’Bhuidheanach Bheag and Carn a Caim. MWIS were promising greater than 90% cloud free tops, so confidence was high as I set off on my way.

Imagine my confusion then when all the way up the weather forecast on Radio 5 Live suggested cloud in the east of Scotland. It seemed on Monday west was going to be best. But I trusted MWIS

What kind of fool am I? (that’s a rhetorical question by the way, so please don’t tell me

It’s not the most inspiring start to a walk Getting away from it all:( Not the most inspiring start

Once over the shock the walk starts just along from the layby, up a landrover track to a ‘quarry’ at the saddle between the two hills at point 902. Firstly though I had to walk through a Balfour Beatty worksite. This walk seemed to be doing its best to make me feel most unwelcome

To be fair though, once past the ugliness of the worksite and on to the landrover track the noise of the A9 seemed to get lost and the walk itself wasn’t too bad. For those that have done this walk themselves please don’t get me wrong – it’s not a beautiful landrover track, but as a means to gain height it could have been worse. But still some views early on Once into the clag though, any thoughts of far reaching views seemed to disintegrate. Any sort of view would be welcome Think I'd better get used to this view. I suspect it's all I'm going to get today :(

And then I met a group of very well mannered ptarmigan crossing the track just as I arrived at the point 902 where the track divided to go across the top to both hills. At about this point I was losing my nerve. The clag seemed to be getting thicker and my thinking was that Carn a Caim would be pretty straightforward as the boundary fence posts looked like they went almost directly to the summit. A’Bhuidheanach Bheag looked a different proposition, as there was a need to drop down to a boggy col before the final trudge up to the summit. I really didn’t fancy getting lost on these two and was feeling a bit vulnerable out in this clag on my own. Just as I was turning round to head home a couple of shadows appeared out of the mist heading up toward me.

Anyway, we stopped for a quick chat and it seemed they planned both hills too and were happy for a straggler to tag along with them. Ian and Andy (apologies if either of you are reading this and I have got your names wrong, but I’m absolutely useless with names). Bagging a couple of easy hills before making their way on to Aviemore. Let’s hope they had better weather today, than they had when they met me

Although I’m a lone walker for the most part there are times when company is good I’m happy for people to tag along with me and vice versa. Today was one of those days. It was good to chat about the usual stuff hill walkers talk about – hills, hills and alcohol (and hills)

The first hill to conquer was A’Bhuidheanach Bheag. Despite the greater potential to get lost on this one we seemed to find the summit remarkably easily – in no small part to the discipline of my companions to stop regularly to ensure we were on the correct bearing. As you can see the views were remarkable!!! Not only was it misty, but the wind was keen enough and there was a surprising amount of moisture in the air despite there being no rain. We didn’t hang around at the summit From A’Bhuidheanach Bheag we followed the path back to the landrover track, only to discover that we had somehow missed a very clear, strategically placed couple of stone arrows pointing us in the direction of the route to the hill. View of the track. Even the camera shutter won't open up completely Not sure how we mised these :)

It seems we had completed a bit of a wider curve to our target, but no harm was done. The route to Carn a Caim was straightforward and soon enough we were on summit number two. The same great views as we had experienced. We didn’t hang around here either Rather than descend via the landrover track we took a more direct drop straight down the hill aiming for a spur which would bring us out near the track by the main road. Not so easily done in the mist and we found ourselves navigating some rather slippery and at times boggy ground down the Allt Choire Uilleim. This certainly made things a bit more interesting and added something to the day 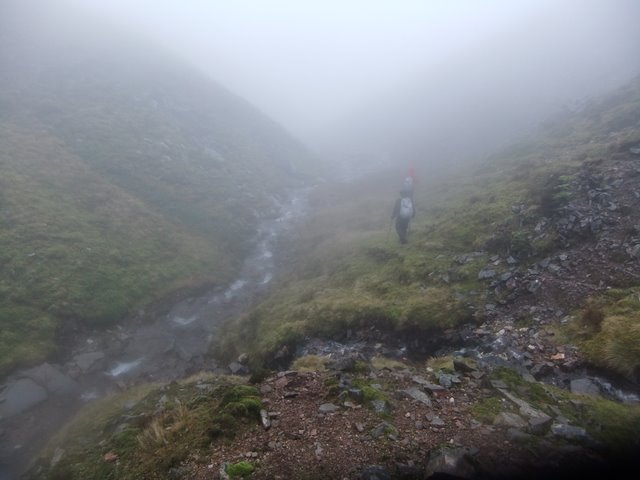 Eventually we were below the cloud (which took a bit longer than we had expected) and heading toward the road. Happily discussing whisky and real ale as we walked along I received a bit of a rude awakening as I successfully managed to locate a hidden gully in the heath and send myself sprawling

Obviously these incidents have their risks, but I was fortunate to walk away with nothing worse than very dirty troosers As hills go these two probably don’t get a good press on account of the A9, the landrover track and the fact they are perhaps featureless lumps. With the weather I had I’m probably not the best placed to give an objective view on either of them. Layby 88 certainly doesn’t inspire as the start of the walk, but to be fair you can get away from the hustle and bustle of the A9 soon enough and you soon forget all about the Lorries and the noise. I can well imagine these two make ideal winter objectives and you never know you may yet see me step forth onto them on a crisp winter’s day sometime soon

Urgh...ehm impressive views ...not!
But well done on you for doing them anyway.

..I had day like that with weather forecest being completely wrong! I use a mix and usually the metoffice one isnt too bad (althought they get it wrong as well)

they all get it wrong! although i find that the mwis one isnt too bad

I think it's just pot luck with the forecasts at times

I enjoyed reading your report even tho you didn't have the far reaching views to go with it; just used my imagination

PeteR wrote:I successfully managed to locate a hidden gully in the heath and send myself sprawling

PeteR wrote:I had actually hoped this was going to be a report of MrsR’s first Corbett

When I did these two it was a fine sunny day but I remember thinking what ugly cairns they were. I used the metal bits to tie up the dogs who were new to this hill walking malarkay! Be sure and pick a nice day for Mrs R to climb Ben Vrackie!

Pity about the weather pete,we did these on a crisp winter's and they make good hills for winter novices like us see what you missed!

Completely different?.... not for me, those are the views I always get!!

Another great report Pete. I bet you're pleased those two guys came along, glad its not just me who does this- no point in looking a gift-horse in the mouth

Looking forward to your next report starring the lovely Mrs R

Well, as you said on my report for these two..

My only solace will be the mantra that there is no such thing as a bad hill walk, although I suspect these two might just push that statement to its limits I guess we need hills like these though, to really appreciate those that simply take our breath away.

Actually I quite enjoyed them although the starting point with the lay by and the construction site is awful.

Not upto to your epic standards Pete, but then again you cant make a silk purse out of a sows ear.
Had a similar day yesterday, CLAG and more clag, but no company.
And surely the topic of conversation should have been in the order of Alcohol, and alcohol, hills(and drink )

But hey "a walks a walk for a' that"( is that paraphrasing or just tosh)
Looking forward ti the next one.