It was now Thursday 26th May. Andy’s and my week in Scotland was running out, and we still hadn’t bagged Ben Alder or even given our new lightweight camping gear a proper test (i.e. of whether we could carry it up a Munro). The weather did not look good (still raining).

We returned to Kinloch Rannoch. I wanted to check the MWIS forecast back in the BT wireless hotspot and Andy wanted to try and get a prescription for some medicine he’d forgotten. We found the doctor’s surgery and the forecast looked like there might be a brief weather window for tomorrow. So we decided to head into Pitlochry to pick up the prescription and refuel the car, then walk in to Ben Alder Cottage with the tents in the afternoon. If we got halfway decent weather the next morning, we could bag Ben Alder and Beinn Bheoil, retrieve the tents and walk out.

In Pitlochry we had a look at the salmon ladder, which I remembered from my first trip to Scotland as a child some 40 years earlier. My childhood memory was that the salmon had to jump all the way up, but it turned out they had pipes between the levels. Somebody claimed to have seen one jump just before we arrived, but all we saw was an old salmon treading water and thinking about the climb. I knew how he felt! After more faffing we got back to Bridge of Ericht and this time found the proper starting place for the track. There was room to park two or three cars by the side of the track and one already there. We shouldered our overnight packs and headed off into the drizzle.

Our replacement of our old gear with modern ultra-lightweight items and efforts to cut out items that were not strictly necessary had not been in vain. The packs still felt heavy, but not as energy-sapping as those we’d walked in with from Linn of Dee to past Derry Lodge last year. They didn’t seem that much worse than a winter pack with ice axe and crampons stowed. I could almost forget I was carrying an overnight pack.

A man in a hard hat stopped his van to warn us of blasting ahead. They were testing some kind of oil drilling equipment for the North Sea following the BP Gulf of Mexico disaster. There was a distant thud and he cleared us to proceed.
We now had the choice of following the track through the forest or taking the "moorland path" (as Irvine Butterfield describes it in The High Mountains) in a short cut around the top of the forest. I decided to go with Butterfield’s route and chose the latter. This turned out not to be such a good idea on a wet day, as of course it turned out to be rather boggy. Progress was slow and when we reached the top the distant hills looked suspiciously unlike Ben Alder.

To further dampen our spirits, the heavens now opened. We made it back to the track and spied a barn-like building back along the track to our left. We retreated to this and found it was some sort of shed in the process of construction. As it had sides and a roof but no door, it made a perfect shelter. We took off our packs, had a Mars bar break and waited to see what the weather would do.

After a while the downpour eased, but it looked like we were still in for a long wet slog and a wet camp (though the bothy was a possibility). There was no guarantee the rain would stop for Ben Alder tomorrow. We agreed we’d had enough, and took the track back through the forest to the car. This was longer, but definitely the better route if approaching Ben Alder from the South. I suspect it would be quicker even in dry weather, especially with heavy packs.
We had now failed to bag Ben Alder for a fourth time, but we’d had another day’s walking in Scotland, recce’d another approach route and (most importantly) proved that the ultra-lightweight gear worked. It didn’t look like the weather was going to improve, though, and our week was drawing to a close. So I suggested we head South in search of some sunshine…

(to be continued in the Walk Reports - Outside Scotland Forum)

I took no photographs on this walk, as the weather was so miserable and there were no views. So instead I'll illustrate our abortive attempt on Ben Alder with my (then) 3 year old son's pictures of Daddy and Andy in the mountains, drawn the same day... 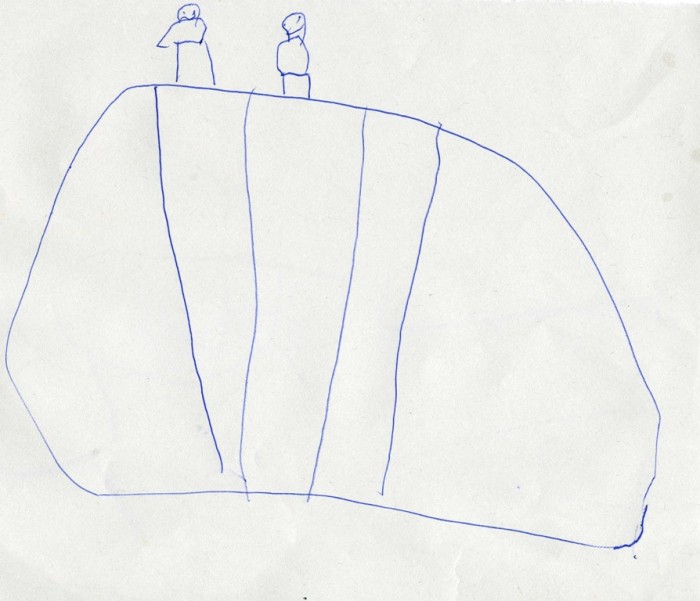 Daddy and Andy on the mountain I think we all have a hill like this!