Clearly The Wrekin is not Ben Alder. But hopefully my previous posts in the Walk Reports - Scotland Forum on the previous days of this holiday will help explain my choice of title.

I’d been meaning to bag The Wrekin for ages. I grew up by the Clent Hills in Worcestershire (that’s Walton Hill for you Marilyn-baggers) and in recent years have been gradually bagging all the hills in the view from Clent Hill on visits to my Mum or to Andy (who lives near Stoke on Trent and can see The Wrekin from his house). We’d even had a previous Ben Alder-like not-bag of The Wrekin, when I got a puncture in Andy’s drive and spent the day trying to get it fixed instead of walking.

Having driven back from Loch Rannoch to Stoke the previous evening, we had managed to escape the worst of the weather. Showers still seemed a possibility, but not the winds or hail we had experienced whilst not bagging Ben Alder.
I’d always imagined the Wrekin, looking at it from Clent Hill, to be a rounded grassy hill dominated by the TV transmission mast. But inspection of the map shows it to be a wooded ridge. My long-planned route traversed the ridge and returned by a path through the fields, which should give close up views of the hill.


wrekin.gpx Open full screen  NB: Walkhighlands is not responsible for the accuracy of gpx files in users posts

On arriving at the car park in an old quarry, we found the local wildlife trust had set up a Peregrine Falcon watching station with telescopes. The birds were nesting up on the cliff and the chicks could be seen through the telescopes. I wasn’t able to capture them properly with the Canon Ixus camera I’d brought (part of the general weight-saving for the Ben Alder trip). You can see the same thing outside the Tate Modern here in London, but it’s always good to see raptors. out of focus peregrine nesting quarry

The ascent of The Wrekin was a straightforward climb up paths through the beech woods. There was a café half way up, but we didn’t stop. Emerging onto the summit ridge in the sunshine (!) there were a surprising number of rocky outcrops. Some of the ones further on even gave some easy scrambling opportunities. They were hardly summit tors, but gave the hill some character and distracted from the eyesore of the TV mast. 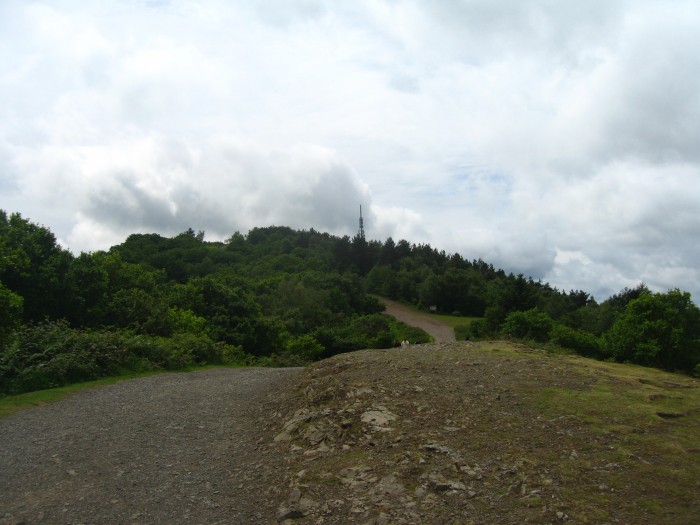 Andy at the summit

From the top I tried to pick out Clent Hill. The toposcope failed to list it and it wasn’t so easy with my familiar view being in reverse, but I think I identified it. The Shropshire hills caught the eye more readily – especially The Lawley (another excellent little hill) and Caer Caradoc. In the distance the Berwyns could just about be made out. The descent was another surprise. It was very steep – so much so in places that I had to grab on to trees. Unsurprisingly there were far fewer people on this side. It would probably be easier to reverse the walk and ascend this way. view through the trees

In the woods below, as we stopped for a snack, I noticed some strange orange things on the ground which I took at first to be discarded fruit. On closer inspection they turned out to be mushrooms. I’m not keen on mushrooms myself, but pointed them out to Andy, who identified them as Choice Edibles and picked a few.

We followed the path ahead, until eventually we came out on a country lane, where we turned left and followed it for a short distance to pick up our return path. By a parking space on the edge of the woods to the left we noted a selection of boulders, which Andy identified as all being different rock types. The return path was through a mixture of woodland and farmland, the latter with views across to the ridge of The Wrekin. The Wrekin from the fields

As we passed through a wood I photographed a dragonfly. After the walk we identified this as a Common Clubtail, which is a Red Book protected species and not previously recorded in that particular 1 km grid square (though it had been recorded along the River Severn to the South). We duly reported it on the British Dragonfly Society website. 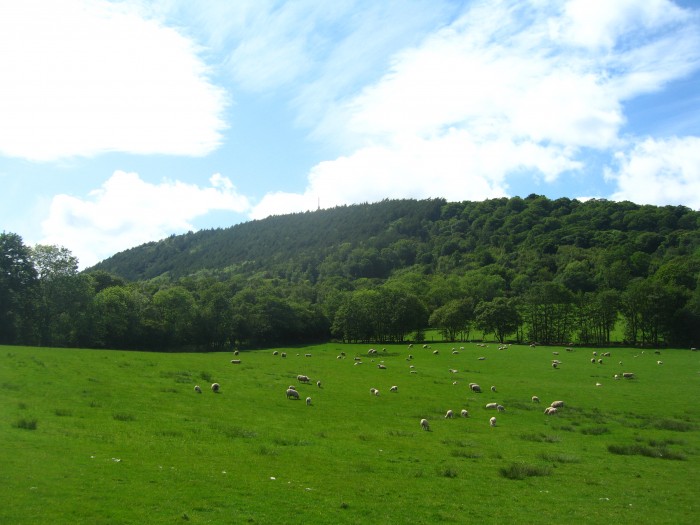 This was the last day of our holiday. We had failed to bag Ben Alder once again, but that was due to the weather. We had still managed to bag 3 Munros and visited an interesting, new (to us) area of Scotland and in the end we had a pleasant walk over The Wrekin in good weather and with interesting wildlife. We had adapted our plans in response to the conditions, and Ben Alder will still be there for next time.

Been meaning to click on this for ages, but didn't realise it was the Wrekin!

Nice little hill, which I'll probably revisit at some point as it's pretty close by. I'd like to be able to see a bit more of the surrounding countryside, as it was rather hazy when I was up there. A bit less remote than Ben Alder though

This was another one of those 'Waiting for my wife days'! Dropped her off at a meeting nearby, then me and my little dog started at the quarry end (north east end), followed the route described over the top and very quickly down to the far end. We then reversed it. You are right, climbing the South west end is easier than descending it.

It is a nice little hill, and because it is so much higher than anything else around it, you can see for miles.

Its also good fun beating mountain bikers to the top! They peddle like anything but don't go anywhere fast.