Route from Crianlarich to the start of this walk was a good way to start the day - along the Rest And Be Peaceful road. Looking at some of the peaks I couldn't believe they weren't Munro's. Got to the car park just past Cairndow, at the head of Loch Fyne, and was ready to start just before 09:15.

I had read reports of this walk on this site and was not looking forward to the long walk along the road to my start point. Didn't want to haul my bike all the way up from Bristol just for this so set off awaiting my first sighting of Beinn Bhuidhe.

Not a lot to see along the road, I took the path past the Saw Mill, through the quarry works, and past Mark Park i.e. north side of the river. Not sure if this is the usual route but it was easy going. Passed one group going the other way, surely they hadn't done it already! At 10:50 I eventually arrived at Inverchorachan (NN22866, 18023). An abandoned building with a dodgy looking river
crossing. Had a drink ready for the uphill bit. A couple carried on past and soon disappeared among the ferns ahead. 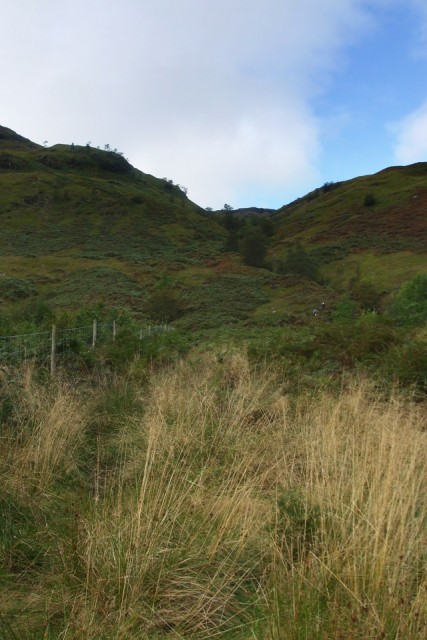 The path through the ferns was quite good and basically followed the course of the Allt Na Faing all the way to the base of the waterfall. I had my first slip of the weekend on a sloping rock along this path so take care when it's really wet, today was bone dry. Followed the path up to the left of the waterfall. This was stoney then boggy then stoney again. Once I got level with the top of the waterfall I couldn't see the path any more so consulted the map.

The slope eased off here, and my pre-planned route looked to be quite steep, so I altered it by heading slightly to the East where it looked like it was easier and not a lot longer. Making my own path again so it was tough going even though there wasn't a great slope here. Reached the easier slope and took a picture back across where I had walked. Seemed to cross a few streams this way so it was quite boggy. Slow going up this way but eventually reached a path which headed towards the summit. While going along this way I
reached a steep stone gully to the left which was obviously where I had intended coming up - looked steep! Continued
along the path with some steep drops to the left. Met the couple I met back at the start on their way down. Had a nice chat, they pointed out some distant peaks I should have fun on in the future. Followed the path on a bit more all the way to the summit with great views all round. Loch Fyne where my car awaited my return, and the dam by Allt Na Lairige. Got to top just after 13:10. 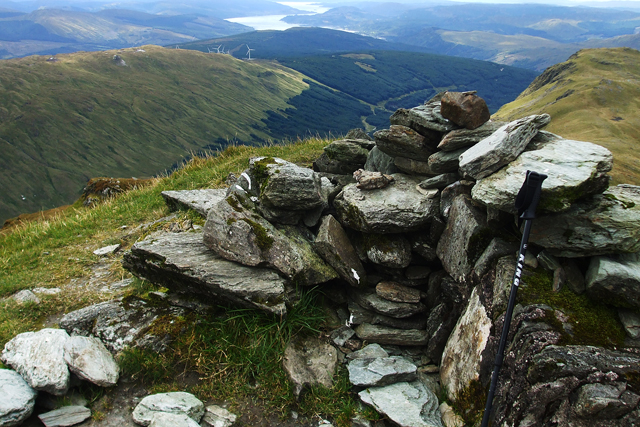 Stayed for lunch as my table had great views but eventually I had to set off. Decided to try and follow my original path on the way down. Reached the steep stone gully and a few people were struggling up it so I knew it should be ok going down. Was steeper than I thought so knees took a bashing, and I had another slip. Still no damage done. Took a picture looking back up the gully. The path was more obvious going back, although it was very boggy in places. I seemed to find all the soft bits so ended up with very muddy/wet boots. It wasn't long however before I reached the part of the path by the top of the waterfall. Not sure how I lost it going up. Just a matter of the long walk back along the landrover path back to the car. Not sure how others feel but that walk along the flat really takes it out of your feet. By the time I got back to the car they were aching and I had the beginnings of a blister on my right heel. Made a note to get better socks when I get home.

Doesn't sound like a great hill for in a mist! Thanks for the detailed description anyway... sounds like a wellies job

You'll have to get a little fold-up bike - there's a lot of Munros I've come across so far where I'd have hated to walk the loooong landrover tracks out to them before getting to climb them!

Hi Skuk007,
Looks like you had a great week in Scotland. I had looked at this one on the map and would rather take a bike for the long walk/cycle in. You certainly clocked up the walking miles this time.

I noticed on another post, Mount Keen, you were looking for hills that your wife could do. I would like to suggest the Lawers range. The start at the Lawers centre is already at 500m and you could do Bein Ghlas and Ben Lawers together. This would give your wife a great aspect of Scottish mountains and then you could do another 10 munro's in the area. either on your own or accompanied.

Thanks monty, I would certainly advise a bike for the road bit. I noticed there were a few bikes tied up when I was walking back.

The Lawers Range sounds just what I was looking for. I will see if I can arrange these for my next trip which probably wont be until next year now.

Then in addition to the munros you could walk around Loch Tay and go boating and visit local villages. If you had the weather it would be a great holiday?

Nicely done. Shame about the wind farm isn't it, what a bl**dy awful sight!

This is a long walk-out!
well done and glad you had a good and clear day for it. I remember snow, mist and vomiting as my compadre didn't eat enough - we re-named it Beinn Spuidhe.