Alternative route on the Bridge Of Orchy Munro's

Alternative route on the Bridge Of Orchy Munro's


With the 2011 coming to an end i had two days of walking left to try and bag 5 Munro's which would take me to my target for the year.This meant i needed a walk taking in 3 Munro's and one taking in 2,the double was easier to find on my map but the treble was proving much more difficult with the shorter daylight hours available until i came across Rockhoppers excellent winter report on the three at the Bridge Of Orchy.
I then posted in the 'meeting up' section to see if anyone fancied taking on this walk at this time of year which attracted many responses about which route would be best and a couple of people agreed we would walk from the farm at Achaladair over the hills and out to a second car at the Auch estate.
Unfortunately sjb101 had to cancel the day before and that left me going for the walk on my own and with no option of a second car so i had to get a plan b ready the day before,luckily Monty had posted up a proposed route walking in from Auch taking in the three hills and then a walk back out to Auch where i would be parked.

I arrived at the Auch estate just before eight and after checking for a parking spot i opted for a passing place just after you turn off the A82 toward Auch and once ready i set off down the road but before i left i checked with the guy at the estate that it was ok to park which thankfully it was.

I walked down the road and came to the bridge where i was presented with two options,the first being the well worn landrover track on the south side of the river and the other was to go left and walk in on the north side of the river,i opted for the north side as from checking the map the night before i saw that if you take the landrover track you have to ford the river 9 times and i really didnt want wet boots at the start of the walk. 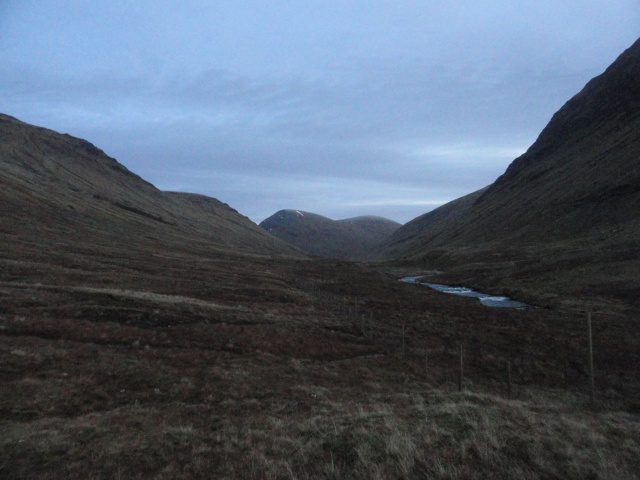 walking up the north side of the river

The walk in along the north side is boggy and wet but there is a faint track you can follow for most of the way and makes for a pleasant walk in with only a few small streams to cross here and there. 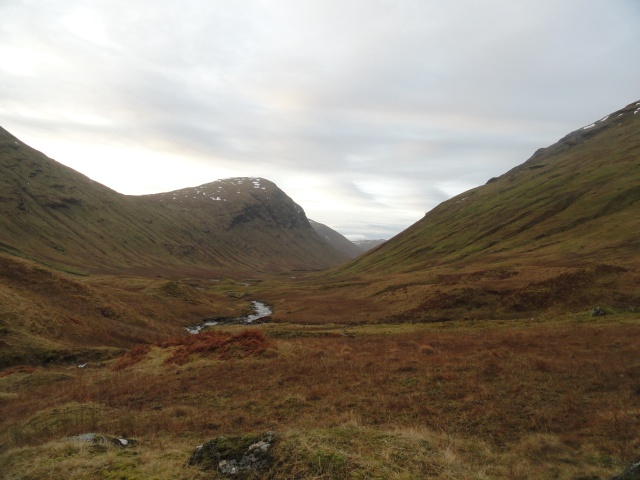 looking back down the glen

Once i was fairly deep into the glen i took a direct line for the track and then followed this till it came to an end,i crossed the water here and decided that i would head to Beinn Mhanach first and then onto Beinn a'Chreachain and finish with Beinn Achaladair.I headed up the hillside just under the brow of Beinn a'Chuirn 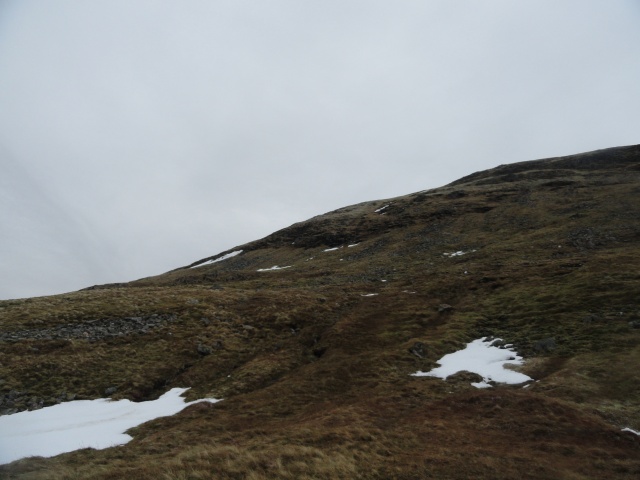 heading up to the brow of Beinn a'Chuirn 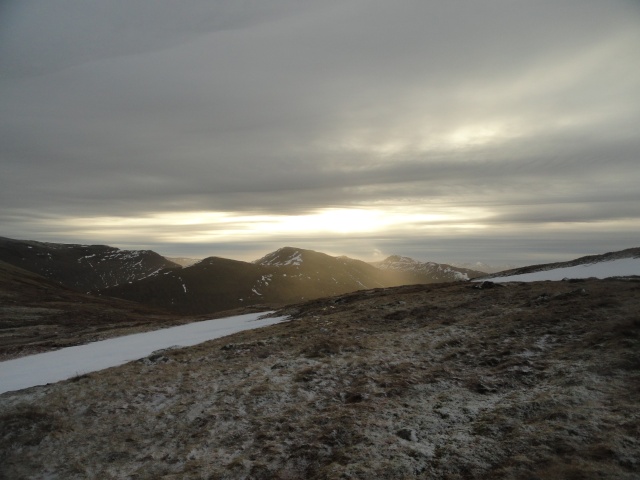 the view south from the bealach 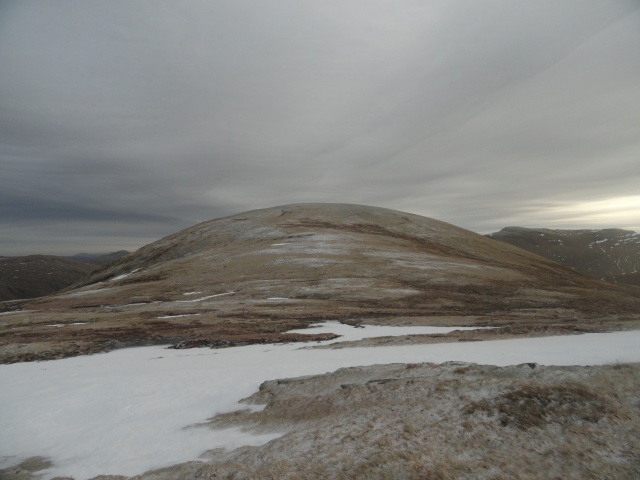 and then round to the bealach that would take me up to the summit of the first Munro which i reached in around 3hrs from leaving the van.Knowing this would possibly be the only proper stop on a summit all day i sat and had some coffee and a snack and took a video from the clear summit of the surrounding hills 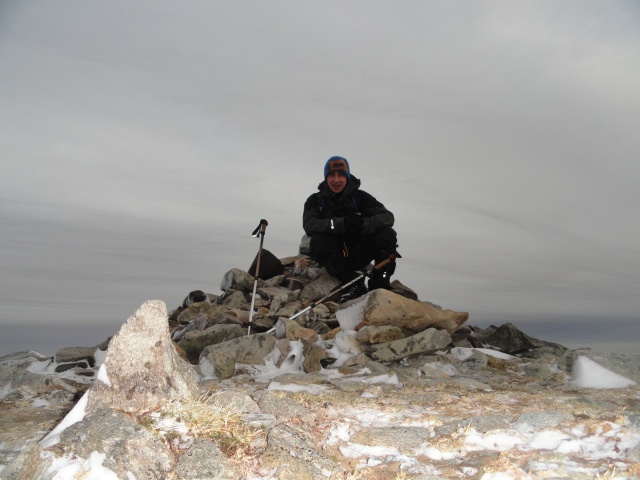 From the summit of Mhanach i could see the remainder of the walk onto the two other hills and from this i decided that when i reached spot height 638m i would leave my crampons with my bag and only take some food and liquids along with my ice axe for the remaining ascents as the snow(which was rock solid) was patchy and i could see routes around it onto the summits. heading down to leave my bag below Achaladair looking to Beinn a'Chreachain from where i left my bag

After reaching the spot where i would leave my bag i headed up to Meall Buidhe and this part was quite a slog up the grass with no real path to follow,nearing the top i found a path that skirted round the side of the hill missing out the summit but i decided to head for the top as i didnt want to lose any height.From here you drop down before starting the ascent up to Beinn a'Chreachain on a defined path which eventually petered out near the top and after an hour and a half from leaving Beinn Mhanach i summited the second Munro where i only briefly stopped as i was needing to make it back to my bag before daylight ran out as i had forgot to bring a headtorch from my bag when i left it. the summit of Beinn a'Chreachain

I headed back down and then ascended up to Meall buidhe where i met two nice chaps who had walked in from the farm and were bagging Achaladair and a'Chreachain,we had a five minute chat and went our seperate ways and i was keen to get up to the third summit as quick as possible as i could see the weather was closing in.I followed the path over to Beinn Achaladair and only followed it up for a wee bit before skirting round the side to avoid a large patch of iced snow which blocked my way up the path and i soon reached the summit which was now shrouded in cloud and it had started to rain,needless to say i only took a summit picture and set off down the hill toward my bag looking forward to having a break,getting a hot coffee and something to eat before the 7 odd km walk back to the van. the summit of Beinn Achaladair

For the journey back to Auch estate i chose to stay on the track as i reckoned that at some point i would have to use my headtorch with the imminent arrival of darkness.The track was a fairly un-comfortable affair in my winter boots but i kept a good pace and only stopped once for a break on the way out and waded straight through all the river crossings which were all around ankle height but i have to say that the combination of my boots and gaitors kept the worst of the water from getting inside my boots. the track out to Auch The last 2km back to the van was fairly tough after the distance that i had covered and i tried all sorts to take my mind off the sore,aching feeling i had in my legs and feet and eventually i arrived back at the start of the walk,with only the last ten minutes or so by the light of my headtorch.

A great walk in good conditions,another enjoyable day on the hills stats for the day

a huge thanks to Monty for providing the route i took and also a thank you to Rockhopper for the advice and info that he provided.

Superb effort at this time of year

. I know what you mean about the sort of grassy slopes you encountered on Beinn a' Chreachain - they seem to sap the energy and drag on forever. Not done Mhanach yet but the walk between the other two is cracking

Good luck tomorrow for your 100 in year

Well done Iain! Thoroughly enjoyed your report and the photos

Good luck tomorrow, hope the weather is kind for you

Hi Iain,thats some walk and good to see this report,felt ill having to pull out so late

.Got my car back thismorning so maybe get up there myself before the holidays end.
all the best
Steven.

Excellent well done....that was fast. Not much snow coverage to plod through makes a big difference right enough.
Might use this same route in 2012 and bike up the landrover track.

Wel done Iain i still have these 3 to do. Will do them exactly the same way as you

Its a big walk for this time of the year
ave only got Beinn Mhanach to do but no liking the walk in/out.

Great report and route!!! Think I will try this one when the days are a wee bit longer as I am missing those ones

Iain, are you on speed?

Great report and route. Might copy you when I get round to these

Great report. I have a notion to do all five at some time with a high up camp so your pics are really helpful, certainly looks do-able.

Charles Caleb Colton (1820) said that 'Imitation is the sincerest of flattery' , so I will quite happily flatter you and copy this route when I get round to taking on these hills!