After a couple of great winter days spent in the Drumochter Pass during January, what had happened to February in terms of getting out there and enjoying the Mountains! It was time to rectify this, so off we went leaving the house by 8.00am and arriving ready to walk by 10.15 leaving from the carpark close to the River Calder in Glen Banchor, by Newtonmore.

our_route.gpx Open full screen  NB: Walkhighlands is not responsible for the accuracy of gpx files in users posts
On leaving the car I was very aware of the wide valley floor that at one time would have been home to many people. The evidence is clear on the more detailed map showing old townships and hut circle locations. There is even the site of an ancient Fort on a large knoll just a few hundred metres up the track that would have commanded an excellent view up the glens, along the valley and southwards to Newtonmore. There was a damp chill in the air, and to remedy this good steady progress was made following the track northwards by the Allt Chaorainn. 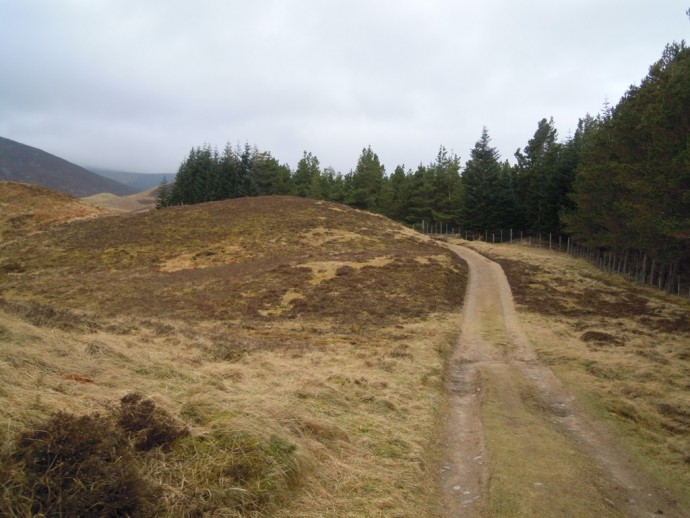 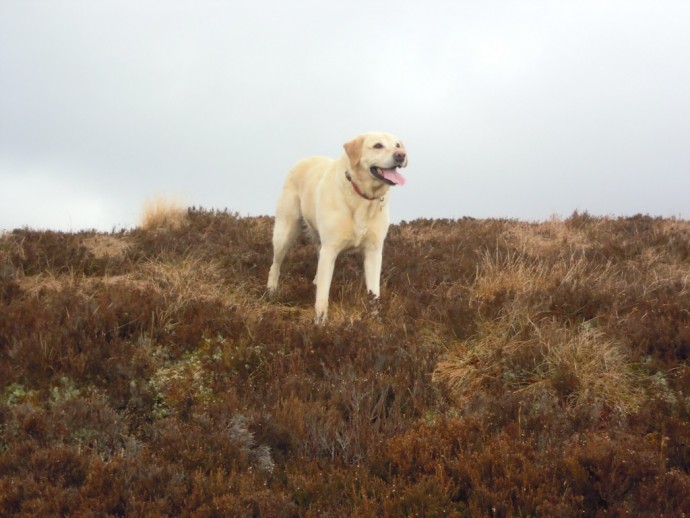 Only on arriving at the location just southeast of the stalkers bothy was the decision made to keep on following the river northwards and head first of all for Carn Sgulain. We could see several other walkers across and up the hill at the bothy all preparing to head up into the mists currently shrouding A'Chailleach. Our hope was that as the day progressed the sky would clear and A' Chailleach would present us with a fine afternoon view and enjoyable descent back down into Glen Banchor? 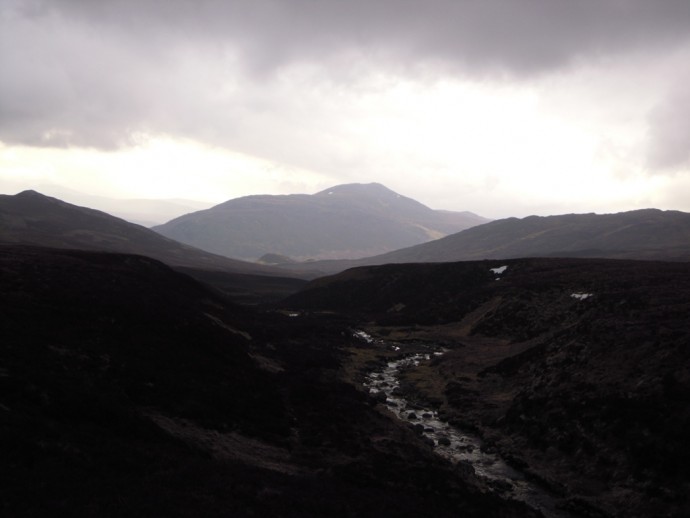 A grand view back down towards Creag Dhubh 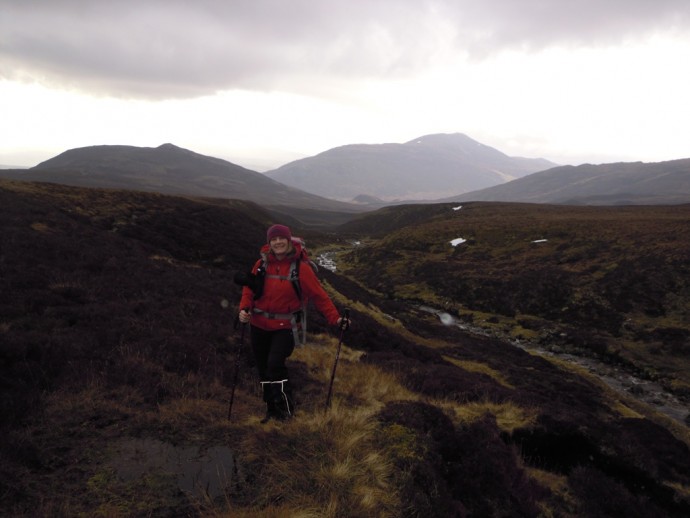 The clouds attempting to rise and clear the corrie. A' Chaillaich coming into view 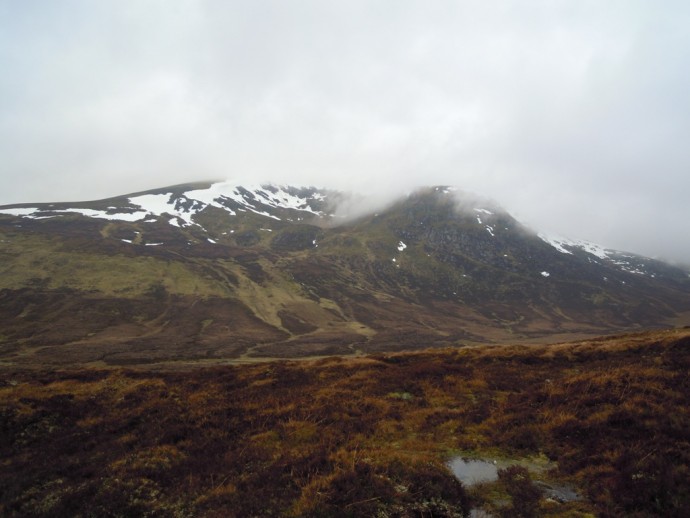 Valerie standing on the summit of Carn Sgulain. We reached this point in less than three hours after a fairly straightforward route find up and round the prow of Am Bodach with a spot height marked at 794 metres. The route so far had been a mixture tracks, bog-slogs and pleasant footpaths getting ever closer into the cloud. However, navigation was fairly easy once visibilty decreased, especially once we joined the boundary line with the old iron fencing remains that would lead us round in a westerly direction. It was here we met some rather friendy ptarmigans who didn't rush and fly away quite so hastily as their numerous grouse cousins that we had met lower down in the glen. 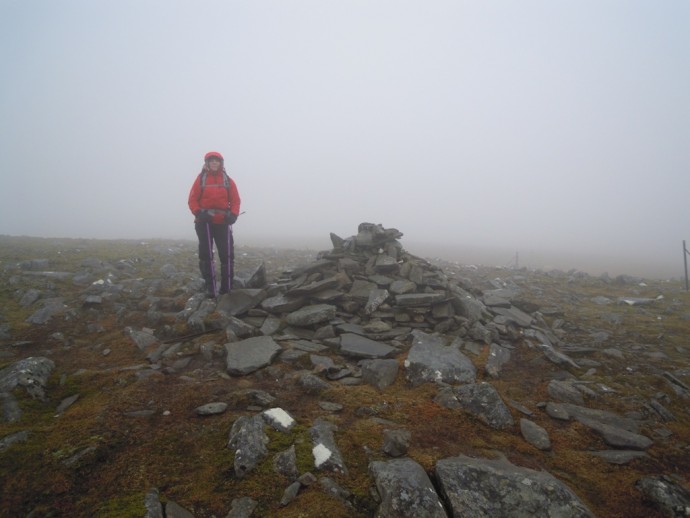 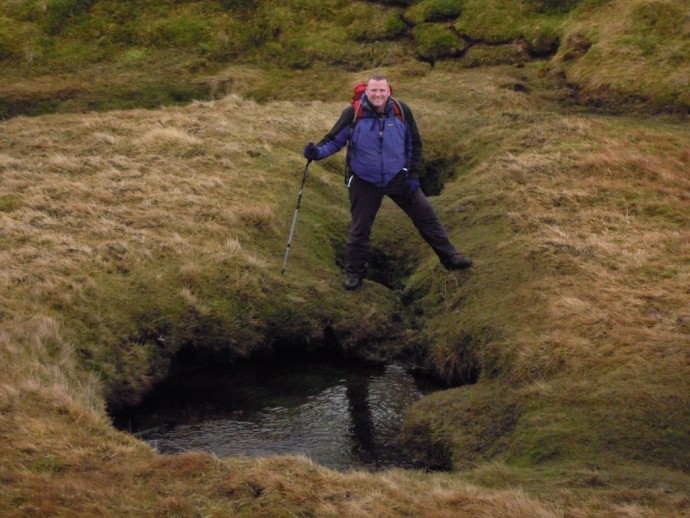 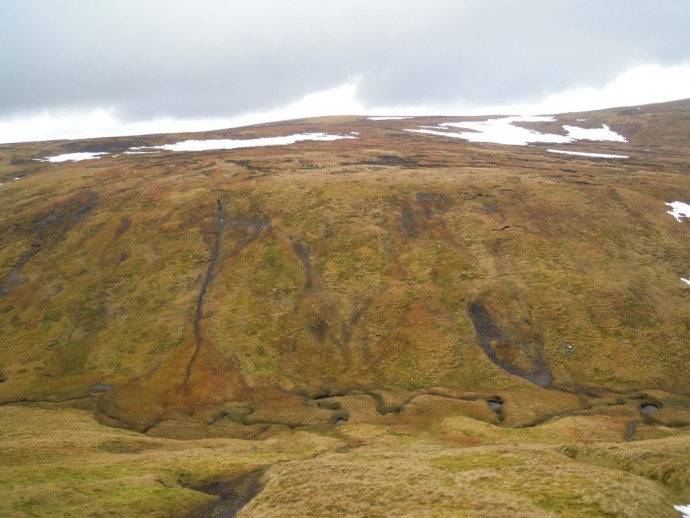 We shared part of the next leg walking southwest and southwards again with a fellow walker who met us on Carn Sgulain after his journey across from Carn an Fhreiceadain. He claimed he had been tracking us in the clag and had used his detective skills to deduce that the party ahead consisted of one large man, one small woman and a dog. How right was he, and we continued on together to the Allt Cuil na Caillich. Here we parted with our new companion heading off southwest opting for the lower route back to Glen Banchor. Valerie, Ritchie and I rested for a few minutes by some fancinating wee pools linked by underground streams. It was bitter cold once stopped though, so after a ham roll and a dime bar we were off up the initial steep bank onto a lush mossy green summit, joining in with the footpath leading to the cairn. 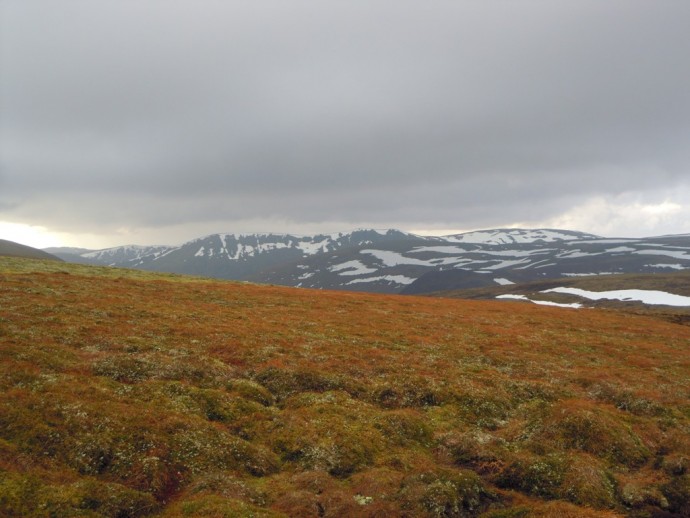 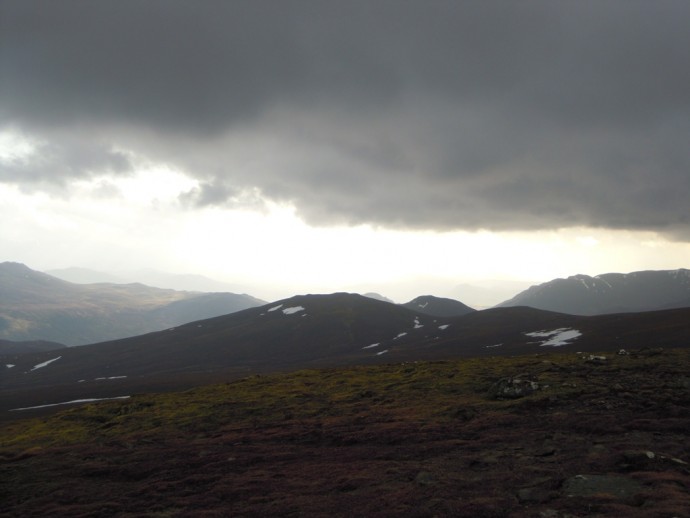 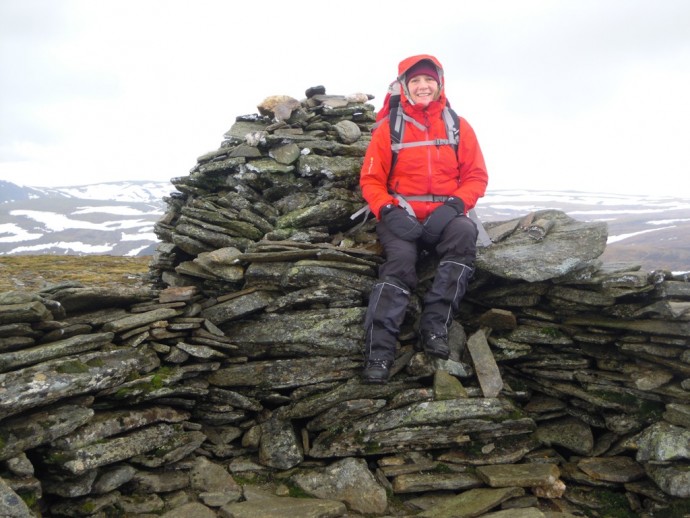 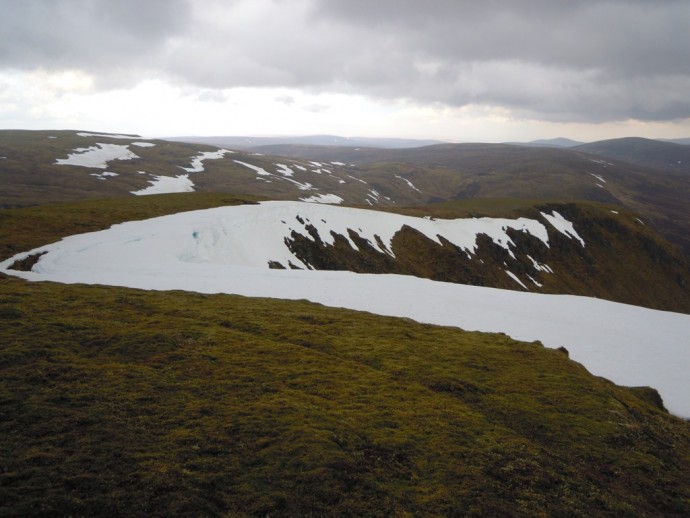 Here we are now back down on the lower slopes ably guided by Ritchie to the stalkers bothy hoping for a seat and bit of shelter. It was great to get inside and sit for a bit amazed at the age of many of the markings written and scratched in the timber linings. Once upon a time a stove had existed in the corner with just the flue remaining through the ceiling. I was convinced it had been reconstructed at one time, at least repaired and overhauled with some care taken to re-use original linings (some signatures dated back to the 1920's) 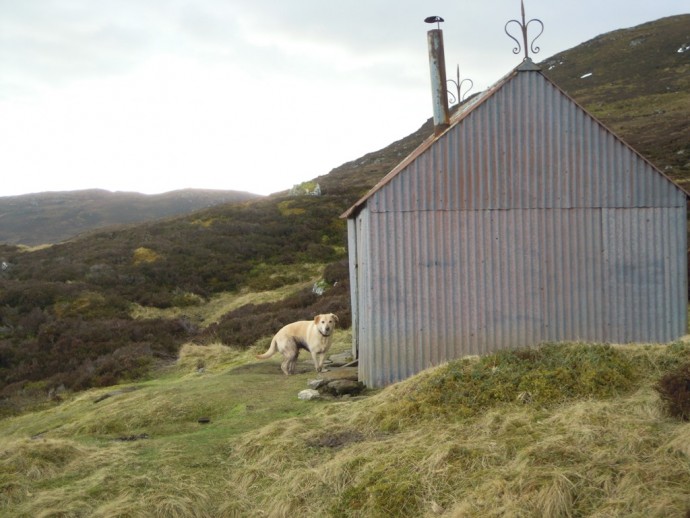 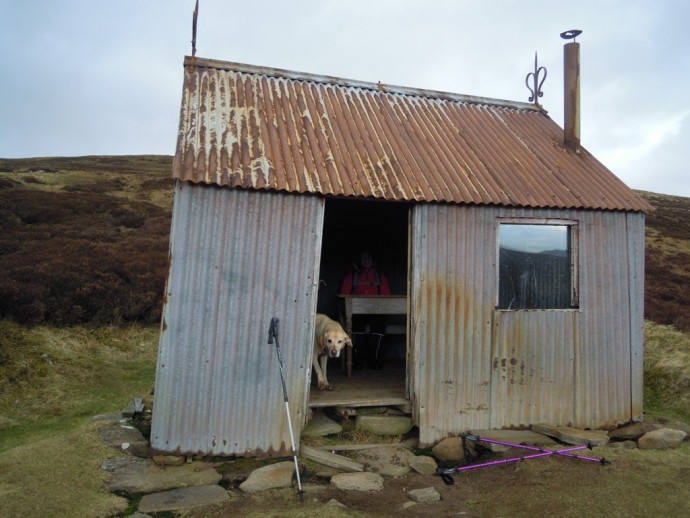 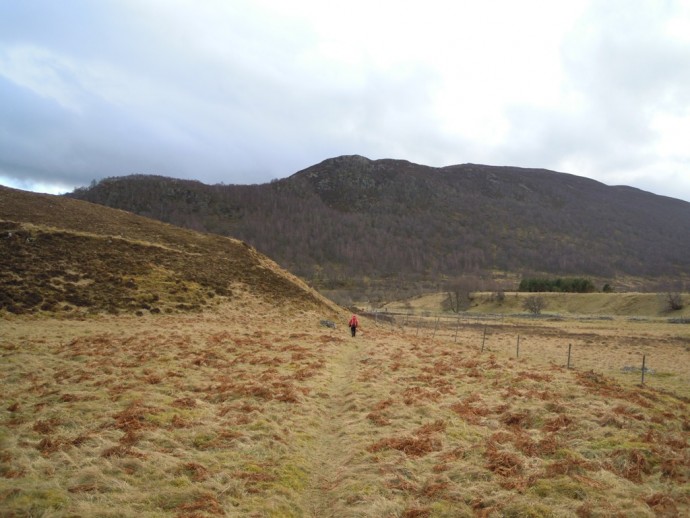 All in all, yet another wonderful day out in the Highlands

So glad all 3 of you were out and about again!! Loved the photos, can't decide which of you is the biggest poser

The bothy looks as though it's moved to a different place

SusieThePensioner wrote:So glad all 3 of you were out and about again!! Loved the photos, can't decide which of you is the biggest poser

The bothy looks as though it's moved to a different place

Yes Susie, we do look like a set of posers in these photos

It was an amazing wee bothy, people had been writing and engraving their names on the wood inside, some dating back to the 1920's, amazing! and there was a single sheet of paper with the rules on using the bothy referring you to the bible on the shelf if you weren't happy with them

Grand day out you two. On the poser front i think it's a toss up between pic 2 & 3