g71.gpx Open full screen  NB: Walkhighlands is not responsible for the accuracy of gpx files in users posts
I've driven past Beinn Dorain quite a few times on my way to the various parts of Scotland. Munro-bagging increasingly not being my main aim (although I'm ticking them off!) I'd wondered if I'd ever climb Dorain - driving from the south it just looked so much of a, well, boring slog. Anyways, I'd spent the past week doing bits and pieces in the claggy depressing weather (including finding some snow in Broad Gully on SCNL) but the forecast for the weekend was looking up - colder with snow showers and clear spells. I wanted to do the Aonach Eagach one of the days, I chose Sunday for this since it was forecast to be lighter winds, so I decided I'd give Dorain a chance on the Saturday to pick it off the list (but still not munro-bagging you understand). I'd already climbed the fine hills to the north of it.

I decided upon a later than usual start to give the showers a chance to clear, setting off at around 10.30 just after a downpour. As I started up the glen there were wonderful blue skies in the warm sun, although cloud was covering the tops. I found the gentle walk along the decent path (just a bit boggy in places) to be superb and it felt real good to be out. What a difference it makes when you can see something! The gradient allows you to make fast progress without pushing it, although as usual I did make a few quick stops just to gaze around at the views. A quick hello to 3 people I passed on the way.

The path steepens towards the col but was straightforward. Trying to keep the rythym going as advised by those excellent writers Frank Smythe and Eric Shipton. At the col it was rather bleak, just inside the mist, but I was pleased to see a slight covering of snow on the higher ground from the overnight showers. I got the waterproofs on in the cold drizzly conditions and headed along the path to the south. There were a few people about, some ascending, some already on their way down, at the point where the slope steepens over a stony section. Near the top of the rise there was a snow patch, a chap bumslid down it but ended up going too far, sliding over the rocks at the bottom - ouch! I used the snow to climb this bit, just edging the boots in. On the ridge I passed the false summit with its large cairn, I wonder how many people have come up in thick clag and have bagged this as the summit? Why is it there? The cloud was clearing and it was looking fine with just enough snow to make it feel like a proper winter day. As I neared the summit at the end of the ridge, the cloud cleared giving a marvellous dramatic scene of blue sky, snow and storm clouds and the light quality was stunning. It had been cold enough overnight for there to be some ice about. I went on from the cairn a wee way where you can look down into the void. What a great spot it was to sit in the sun for refreshments. It was all so good here, I spent half an hour wandering around the end of the ridge, messing about over the rocks, climbing up the patches of snow that remained and taking photos. In another world. As I got ready to move on down the clouds came over and it started to snow, a perfect addition to the winter feel! I kept to the right of the ridge where I could stay on a long continuous patch of snow. This brought me to a section of rock where I spent a while climbing up and down various routes giving some mild scrambling. What a hill this was turning out to be! Eventually I carried on and used the earlier snow patch again. The cloud started to clear once more and I had a great zoom down the lower slopes below the bealach. At the car I looked back up to the scene of a my day and gave thanks to this wonderful hill. Boring? Slog? Not a bit of it, what a great day this turned out to be, and unexpected at that. I'd read ages ago of the poet Duncan Ban MacIntyre and his love of this hill.

Honour beyond each ben
for Ben Doran;
Of all I have seen beneath the sun,
she is the most glorious for me

I was staying in Dalmally and saw there is a monument to him there. So I visited it, a huge structure built in the mid 1800s I believe, and visited by Queen Victoria. I gave my appreciation to him and his hill whilst surveying possible winter routes to the top of the monument. . That picture of the train is bizarre - like the Nazca lines

Fantastic report Yokehead, looks like two different days....in fact two different seasons, stunning photos throughout but this one is a belter....you should call that winter/summer 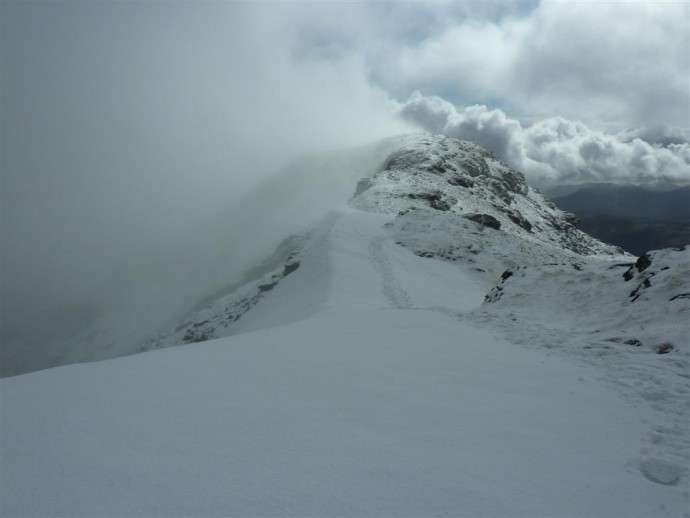