just a quick report from my last trip.
i believe there is no need to write a detailed report as the route description on WH is pretty good and doenst leave much to add.
we arrived to crianlarich at about 10.30am, the car park (side of the road) was very busy already. we followed the WH route, after passing the gate on the country track we headed straight up towards ben more.

here we started our ascent, as you can see it doesnt look too encouraging 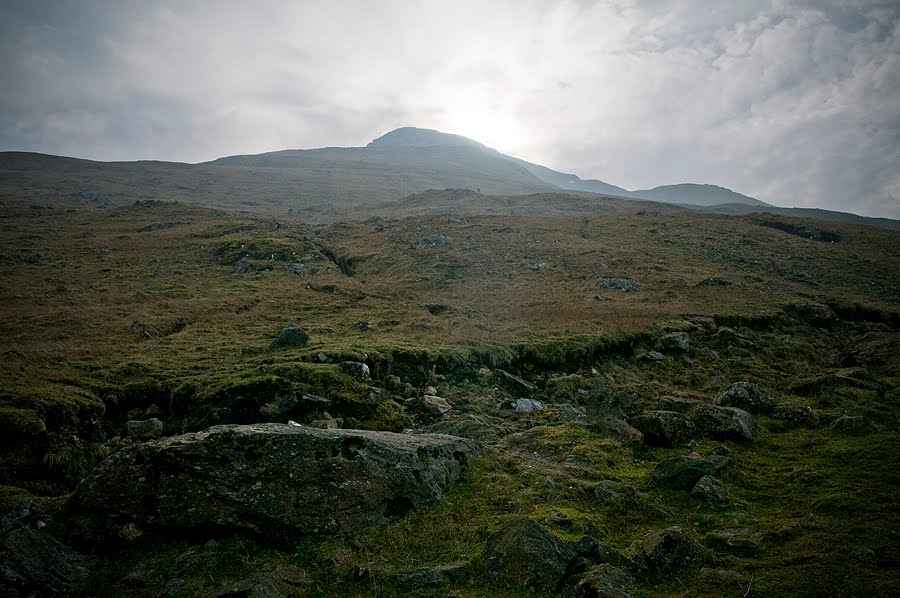 the day started with quite a thick fog (driving M9 was horrific) but as we arrived to crianlarich it was much better and all that was left was that haze, views were only so-so, athough the two munros are know to be good viewpoints.. 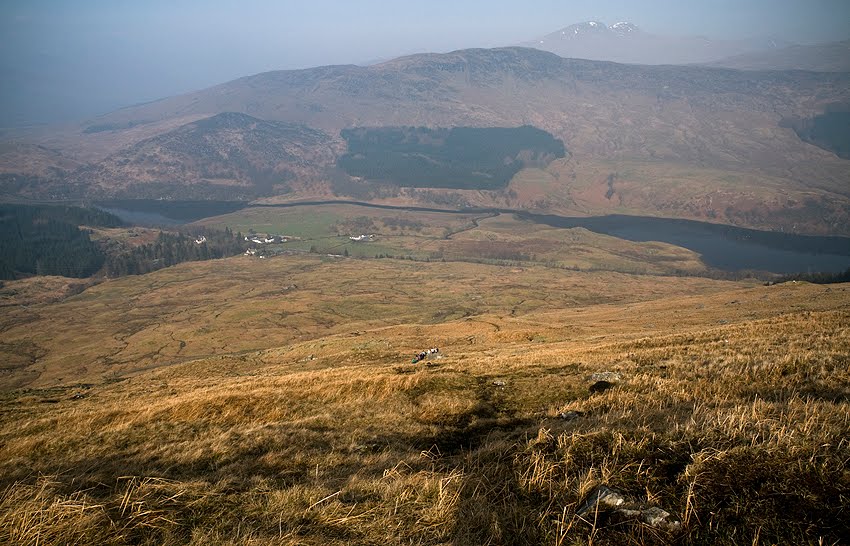 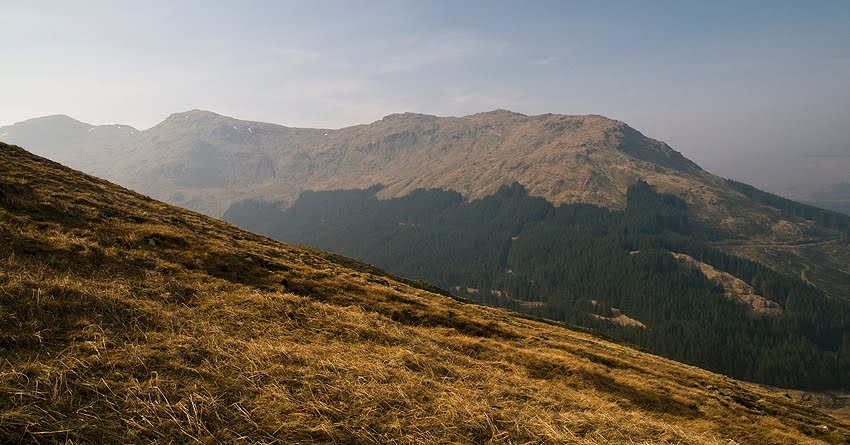 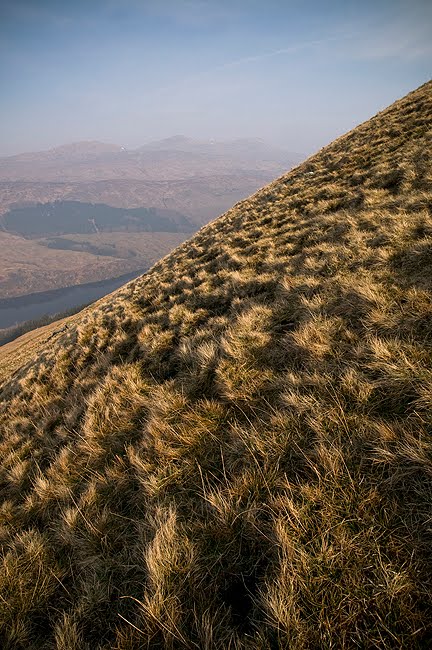 the ascent isnt the more pleasurable one as most of it is just struggle- steep up via wet, boggy, soft, soaked grass. i must admit i really struggled up ben more.

we reached the ben more summit after 3 hrs climb, relieved, happy and doubting whether we really want to bag stob binnein as well. honestly i was knackered. 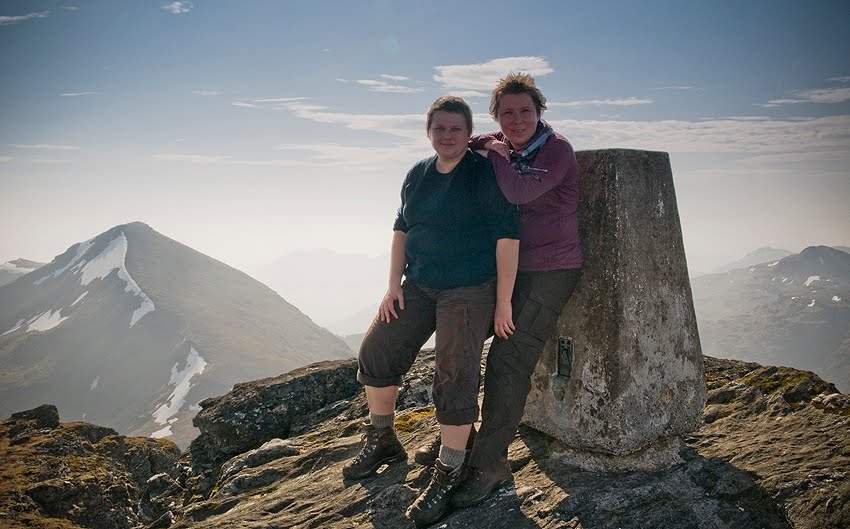 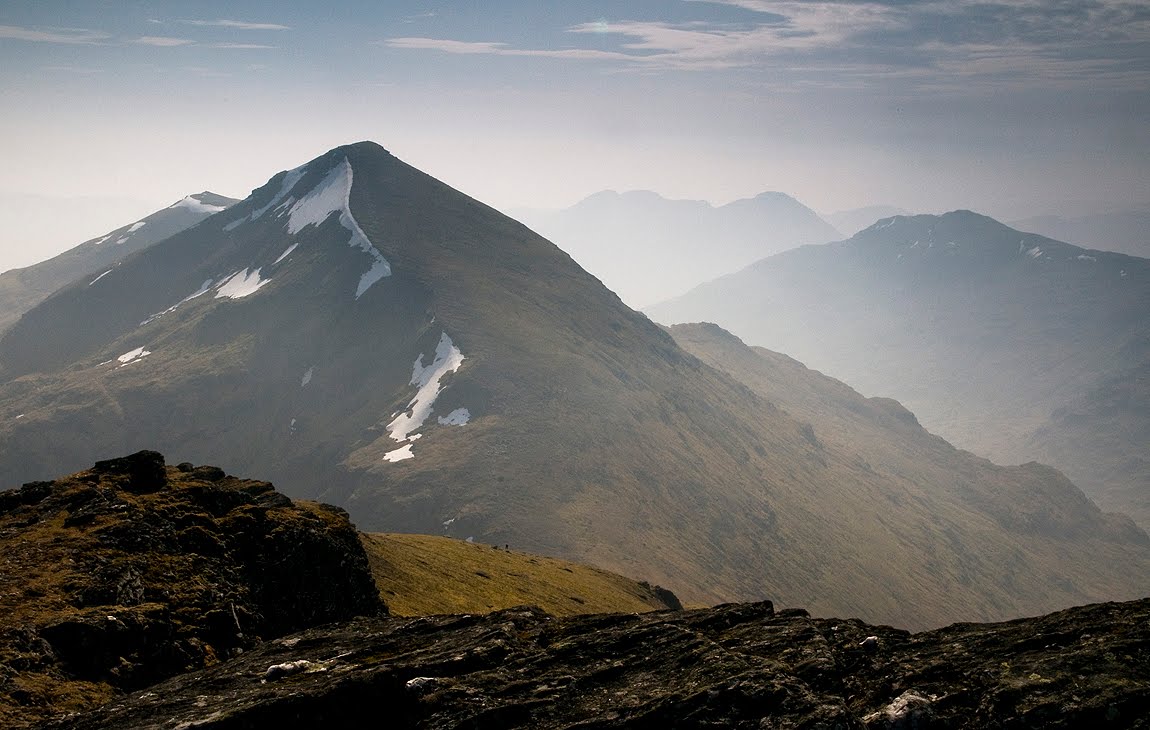 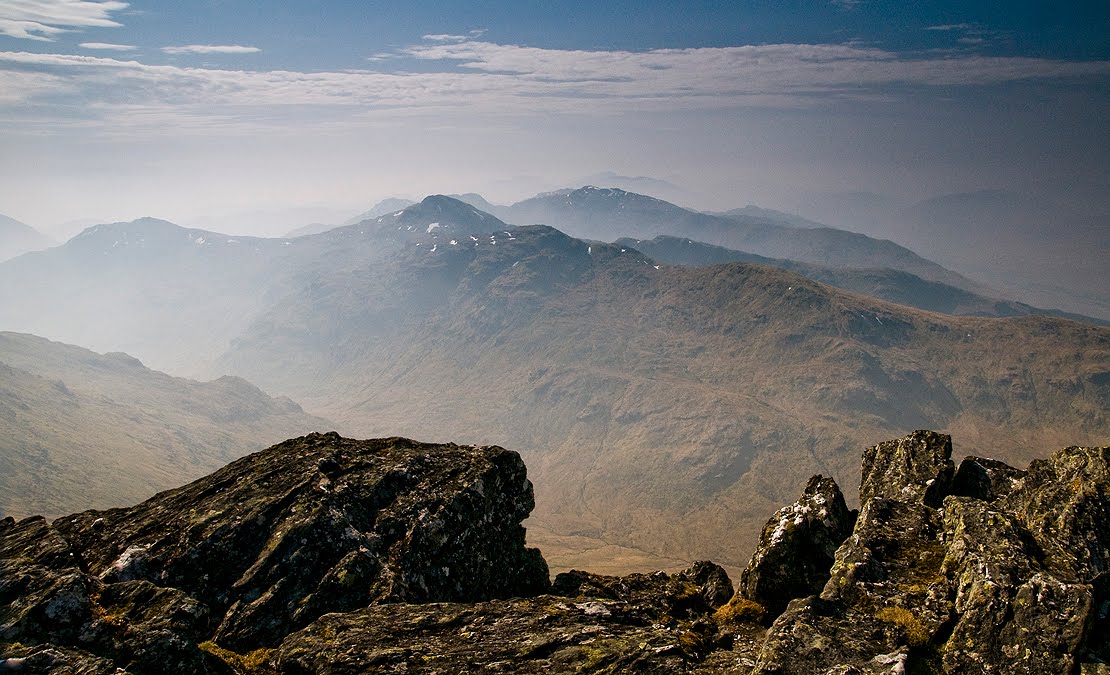 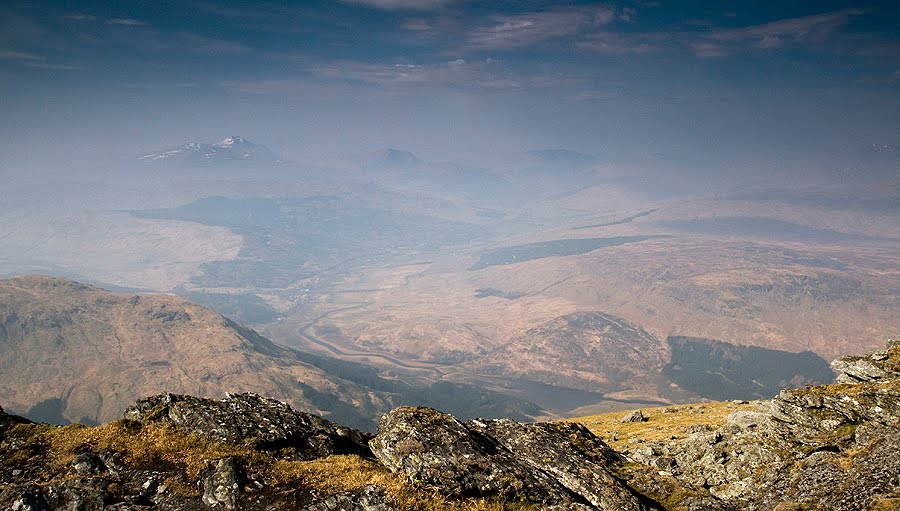 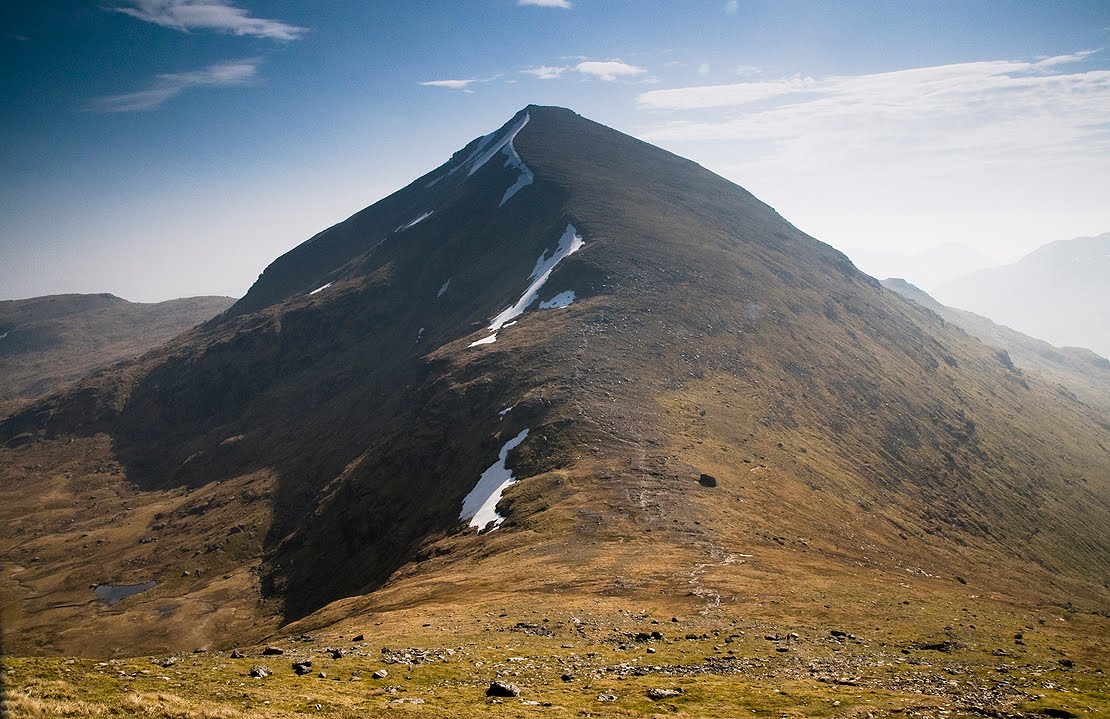 as i mentioned, the route is either steep up or steep down, therefore descent from ben more towards the bealach was quite painfull for the knees

and the view to stob binnen was pretty much intimidating... but as i still had plenty of time and i know i would really really regret if i gave up...

ben more from half way up stob binnein 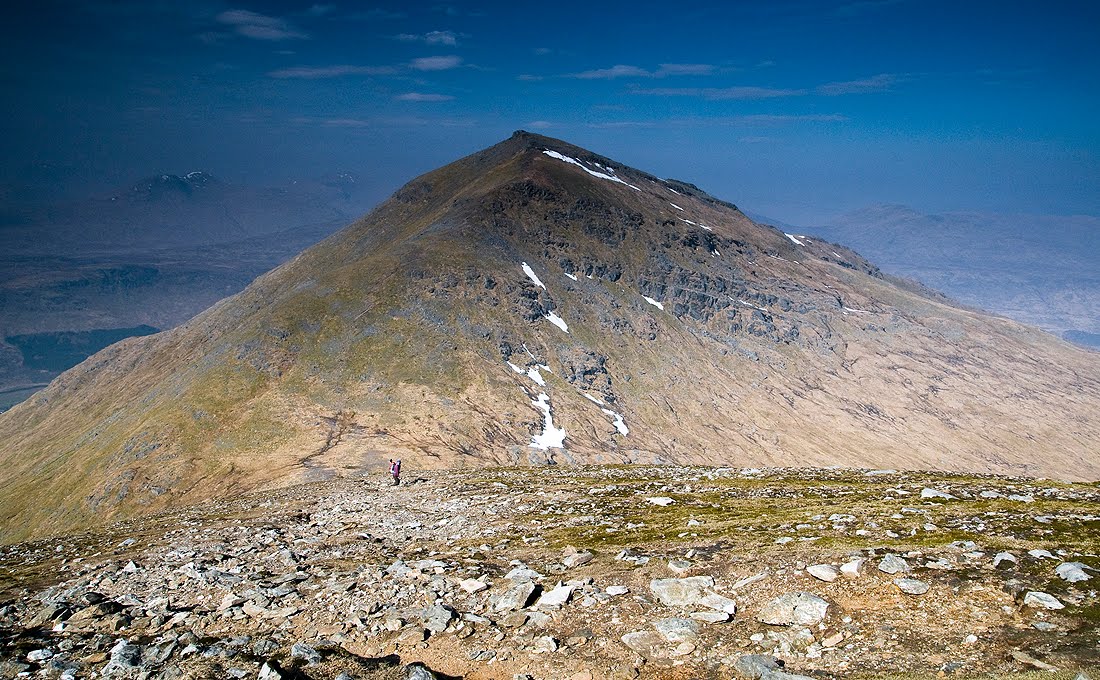 way up stob binnein was quicker than i expected, 57 mins exactly and it wasnt that steep, it actually was a wee bit of a relief after struggle up ben more.

oh, that's my corpse on the summit of stob binnein 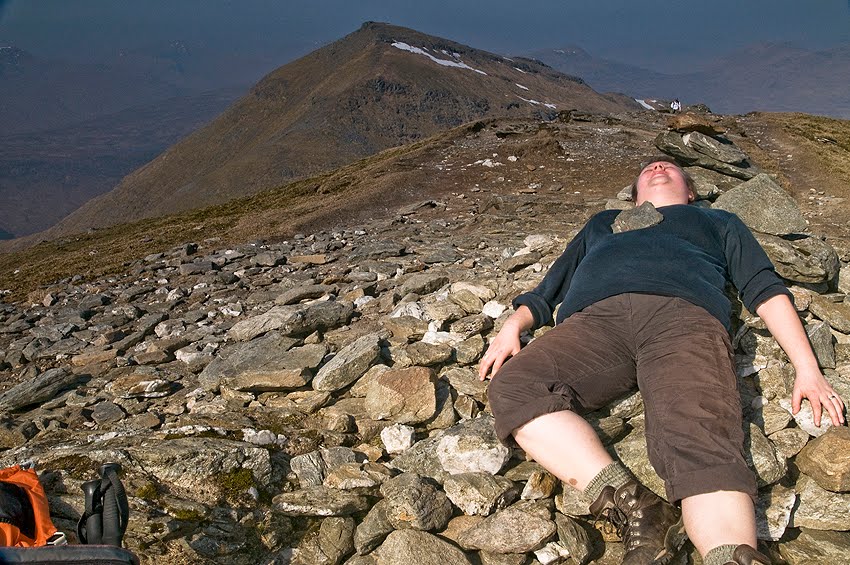 but i got my senses back pretty soon

we didnt spend much time on the summit as the wind picked up, we decided to head down and then have lunch at the large slab at the bealach 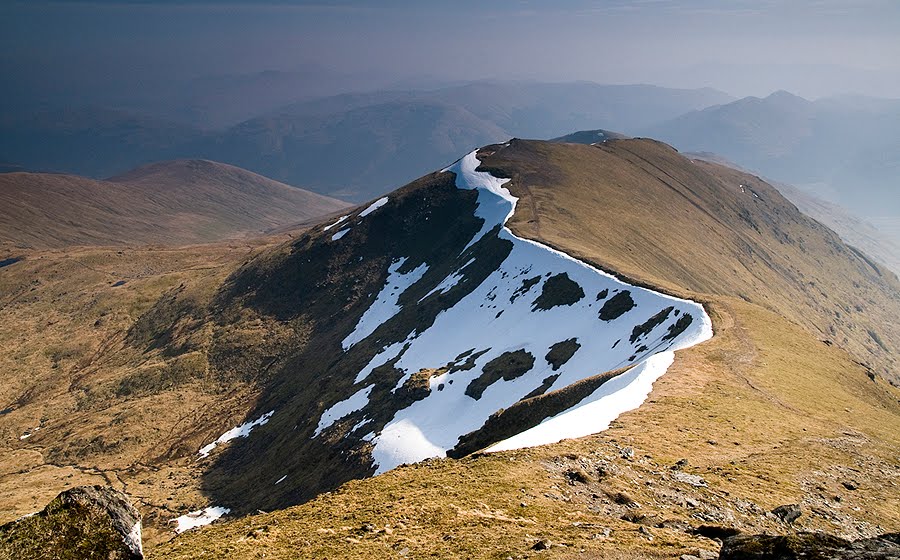 hazy silhouettes of the mountains around, i guess the furthest is ben ledi..? 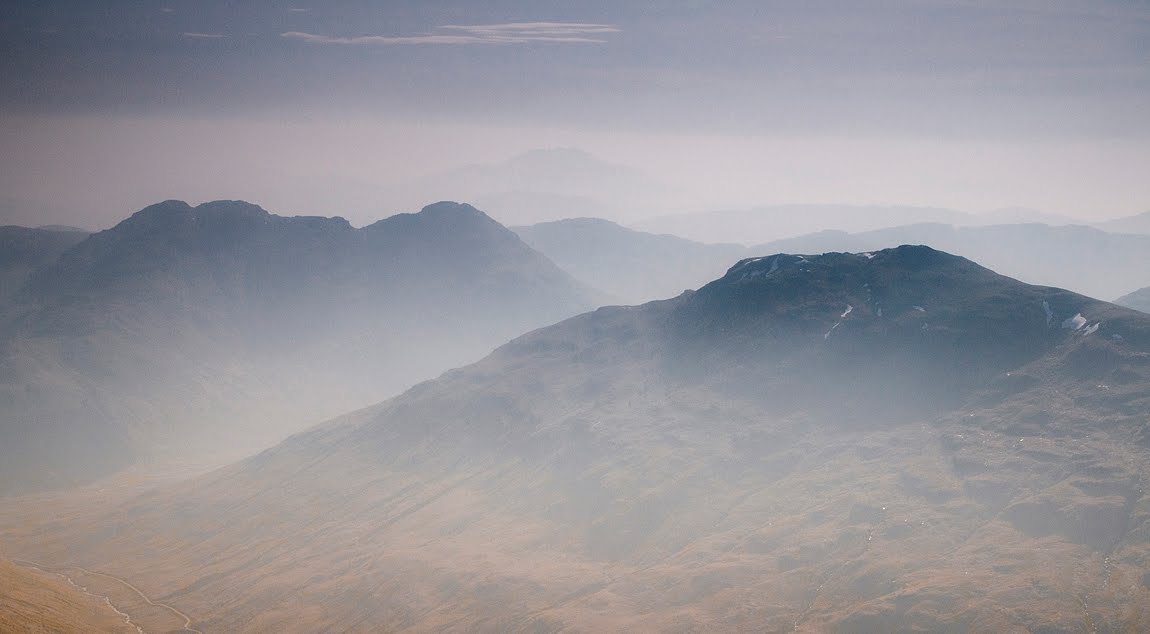 after the lunch at the bealach we headed down as advised on WH. that was a good choice. the other path looked much steeper and as we watched some guys struggling down, we knew that at this point we were the winners

ok, maybe the WH descent route isnt the shortest but definitely is much more 'knee-friendly' and we lost the hight quite quickly and then just walked along the benmore glen on the flat, nice flat (who cares it was extra boggy) but NICE FLAT ground. 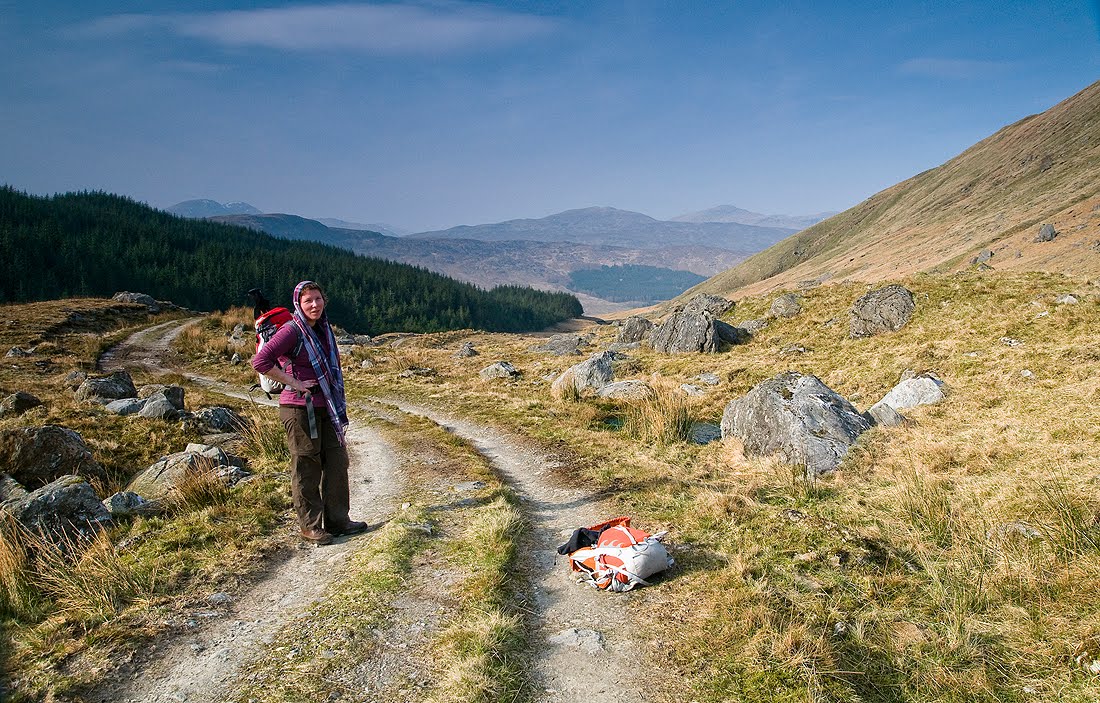 on our way back, ben more looked much more likable than in the morning, but still i was quite impressed with myself that i forced myself up that hill. no more though, sorry ben more! 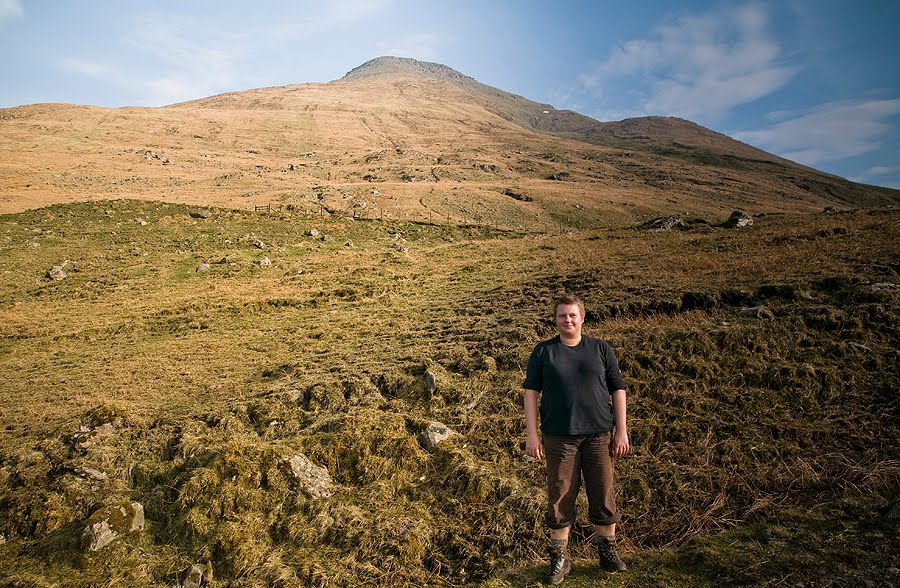 although the visibility greatly improved by the late afternoon, it still was pretty crap.. 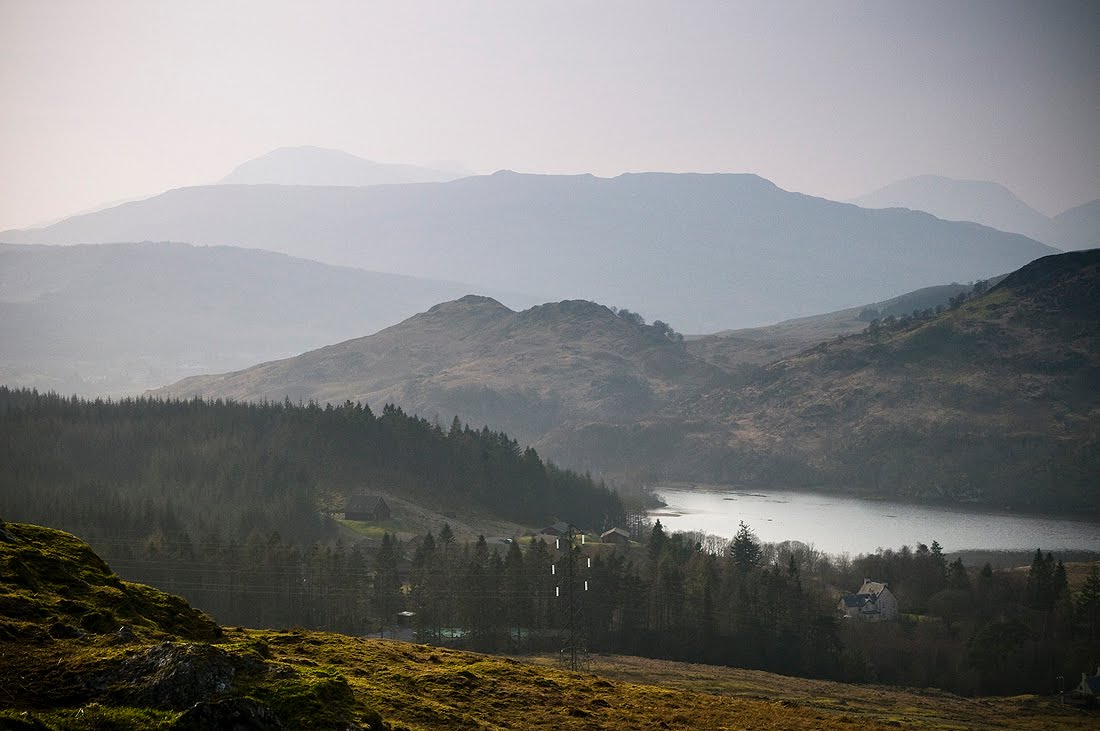 that would be it

for more pics have a look here: http://www.around-scotland.blogspot.co.uk/2012/03/ben-more-stob-binnein.html

oh but those are lovely pictures.

Well done, Blueyed for not giving up, I'm glad you carried on to Stob Binnein.

It would have been a shame to miss out on the most southerly mountain in Britain that's higher than Snowdon.

Ecky thump, well done!! Do you have any feet left after that?? Loved your photo's especially the one of you guys on the summit of Ben More... Brilliant

If I could "like" your report more than once, I would

A great day to be up these two biggies. When i saw them from the Corbetts up the road they were just hazy silouettes like you mention in your report. Good effort and cracking photos

This is brilliant, made me laugh out load at that summit corpse shot,I think it was the addition of the solitary rock on your chest that capped it... I love the word uphillness too

the photos came out beautifully and added to a great read

cheers guys,
i liked it a lot, especially when i was back in the glen

Some lovely pics there and I hope to do these 2 in May. Thanks