Solo walk as off on holiday on Sunday, Pigeon and Jim walking in the Manmores tomorrow and Huck Finn is working on his boat.
Later start than normal but on the hill for 08.40; no jacket, gloves or hat needed a first for this year.
Several cars in the car park with people prepping for the hill. Simple walk up following the path, reputed to be boggy but not too bad although in a couple of areas the path was 30m wide.
Nice sunshine until about 800m where on the shoulder of the ridge the wind got up and the first light snow shower started. 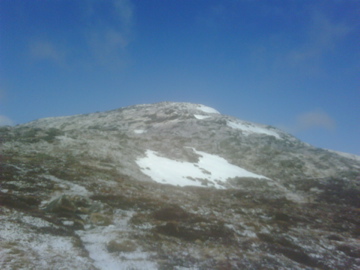 Passed a couple of guys on the way up, overtaking! a first for me. 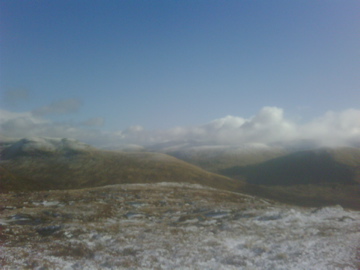 Several cm of fresh snow on the craggy slopes to the shelter stones, where the next snow shower blew in. 2 hrs 10 min to the top where joined by the two guys I had passed earlier. Had a quick bite but too cold now to hang about, had planned to walk to the 815m spot height and look at the corbett Bienn nan Oighreag which I would not have time to ascend due to a previous commitment.
In the descent to the ridge the two guys Jim and Ian from Gartcosh came with me, they did not want to go back by the ascent route. Down the ridge to Cam chreag

Walking pace slowed as the tongued wagged so had to take a more direct line down through the crags on Cam Chreag. A pleasant walk back to the car in good company. Strange who you meet in the hills Jim turned out to be a meter reader for the gas and used to read my house meter in years passed before being allocated to another area.

All shaky camera work due to a steamed up Blackberry phone, bound to receive comments from the arch photographer Huck Finn

Nice one, Frigate. I did this one last August when the forecast was for a bright morning but thunderstorms in the afternoon.

So I got up Meall Ghaordaidh and back to Glen Lochay before midday. It turned out to be a glorious sunny afternoon so I roamed around Killin taking photos. And I know what you mean when you say, "Strange who you meet in the hills". Amazing coincidences can happen in remote places!

At long last you have got the report done