You will have noted the date and I should have guessed, the weather when we left Bury was glorious, 0700hrs not a cloud in the sky. Jeremy, MIck and Chris ( Jerry's youngest, 15 and a quarter, yeah, its the teenage thing!). No Jim, he was slumming it in the Pyrennees with a mate (boiling hot and views for miles according to his text). The journey was great, M6 quiet, Jeremy was driving and the promise of a great day out in an area I'd never been to beckoned. Jeremy had suggested the walk, he'd got a book, all the measurements were in feet but it seemed ok and I'd checked the map and walkhighlands website for a description. Thanks to Colgregg for the description of the start point. Remember the weather? As we left Appleby and turned towards the hills looking for the radar station it had disappeared in the b****y fog again! There's no fool like an old one. Once at the barrier which prevented further progress, just a glimmer of hope in the form of a flash of sunlight so we kitted up and set off up the easiest Hewitt in the list. .
The tarmac'd Pennine Way was a pleasure even in the fog and a quick nosy round the Station. The Golf Ball was almost invisible until 50 yards away


We did 360 degrees as we couldn't climb the fence surrounding the far side so finished up at the entrance again and off we went to Little Dun Fell along the beautiful paved path. We were walking straight into the wind and it was cold, a far cry from the previous Sunday of 22 degrees. The paved path may upset the purists amongst us, but from the evidence of the regrowth around it and the numbers of hardy types who walk it, I think it's a 'good thing' and in any case you can rattle along at a fair old gallop!
So on to Cross Fell and the highest point of the day, reached after about an hour and a stop for a brew and a butty and a prayer for the cloud to lift. You'll have noted the date and sure enough about ten minutes after we had left the summit heading for Greg's Hut. Mick and Chris Heading for the hut

The mist lifted and a clear blue sky silhouetted Cross Fell perfectly, just a shame we weren't on the summit to appreciate the views

Undeterred we hit the Pennine Way and soon reached Greg's Hut (an MBA hotel). An inspection made us realise what a life saver this would be in a winter's storm and a donation was left. The Visitors book revealed that 'Oliver and his Dad' had been there the night before and had a great time,hope you had a good trip lads!
Our next objective was Bullman Hills, which involved a left turn off the 'Way' and down then up to a pair of bumps, which looked man made but on reaching the southern hill had a fine view of Cross Fell and most of the surrounding countryside. Cross Fell from the Bullman Hills On top were the remains of two birds, clearly a meal for something as they were picked clean. We did the Northern top and then set off for the next hill, Long Man Hill Yep, that's it in the distance.

We headed for the mine workings we could see and stopped for lunch, it was clear we were in grouse moors, as we put up a lot and our lunch stop, although locked was in use. After lunch it was up on to Long Man Hill, the summit was flat to say the least and the lack of a decent cairn indicated a lonely old hill with few visitors. We didn't hang around, then followed a line of well maintained grouse butts, down to the beck and on up following another line of butts to a gate in the wall on the final hill of the day, Round Hill. Which as its name says, round! but its not, as you can see. Round Hill, flat on top, a wall and nothing much else

The scenery had been and was open, remote, heathery, grousy, full of shake holes and mine workings, the path from the lunch stop was full of purple fluorspar and everywhere was dry, even the bogs were starting to crack and dry out and pools of water earlier on the Pennine Way were leaving the gallons of frog spawn high and very dry!
From Round Hill we made our way onto a bridleway past the source of the South Tyne, 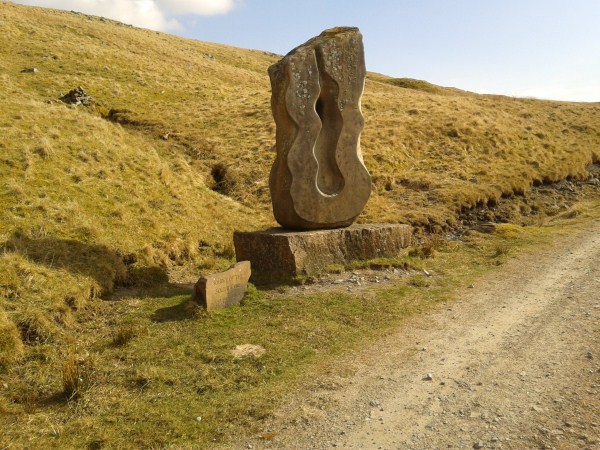 and eventually to a bridge over the Tees with an information board proclaiming the glories of 'North Teesdale'. Back on the tarmac for a while, Start of the road home

and then a long and winding path along side Trout Beck, didn't see any trout mind!

with Great Dun Fell in the distance, the cloud came back and the temperature dropped, good job we were going uphill to keep warm. The path and Great Dun Fell


We got back to the car, but fun didn't stop there as it refused to start, so a quick push down the hill and thankfully it started, you can imagine the phone call to the AA, ' well we're up this road which you might find...... eventually!
However all ended well and thanks to the Landlord of the Crown and Cushion in Appleby for the good beer, (Robinsons) and the free bowl of Roasties, a very nice hors d'oeurves to the fish and chips from the Riverside chippy!!

That's typical of many a walk with lovely mist clinging to the tops then drifting away once it's too late to turn back to the summit. You did an extended version of my original planned walk. After Gregs Hut I intended to go from Tees head and follow the infant river to Trout Beck but decided to cut it short as the daylight would not have been there to get back in time. Whats the track like up Trout Beck from the Tees? It looks reasonable on Google Earth. I am going to return later in the year to redo the ridge and complete the original itinery. Looks like you had a decent walk round the North of Cross Fell though.

The track up Trout Beck is generally very good and follows the river closely, you've just got to be careful where the river has eroded the bank on some of the bends, it improves nearer to the top as it gets to the Dun Fell mine workings.

DaveB1 wrote:The track up Trout Beck is generally very good and follows the river closely, you've just got to be careful where the river has eroded the bank on some of the bends, it improves nearer to the top as it gets to the Dun Fell mine workings.

Thanks for that. I must admit that I am really looking forward to repeating the trek in decent weather.

Lovely report Dave, I would've paid good money to have a paved path today......at least for a while (report tomorrow) Its a shame about the mist early on (and that random finger that keeps trying to get in on the act

) but all the same what a little cracker. Glad the car started, that is always a nightmare scenario....particularly if you have to hike miles to get a phone signal

Great report Dave and looks like that you were really quite lucky with the weather (well mostly)...and especially the car!!