While looking for something else I came across an old album with photos of a trip my brother, my University friend and I took in August 1983 to fulfil a childhood ambition to walk through the Lairig Ghru. We'd talked about it with our dad, but sadly it was an ambition he never fulfilled. I was 20 and my bro was 17.
I hope the pictures will provide you with some amusement and fun. The quality isnt that great as they were taken on a fairly basic compact film camera. We carried huge rucksacks which were fairly new, I also had my brand new karrimat, but could only afford the short one and we didnt have a tent and couldn't afford to buy one, so decided to stay in bothies. They were marked by crosses on my brand new 1:25 000 OS map I got for my birthday, but we had absolutely no idea what they were like.
We took the bus to Braemar and stayed overnight at Inverey YH which is sadly no longer a hostel.
The first day we walked up Glen Derry into Coire Etchachan as far as the Hutchison Memorial Hut where we stayed the night. Our Grandpa who always had a story for every occasion told us of a time when he was training with his men during the war and they broke into Derry Lodge in a blizzard to find food and shelter, but we thought that was perhaps not the best idea. However we were happy with the shelter of the Hutchison Hut although it was rather draughty! Inside the Hutchison Hut, Joan leaning on her bedroll, my wee bro John when he still had hair. he still has that fair isle jumper. Outside the Hutchison Hut. Caberfeidh please note tin mug on outside of my rucksack. We'd never have been able to carry a tent even if we had one. note the dome tent outside belonging to mr and Mrs Beanfeast.

Outside the hut you can see pitched the first dome tent I ever saw. It belonged to a couple whom we called Mr and Mrs Beanfeast as they were eating a dehydrated product of that name which I have never seen before or since. We met them several times during our trip. We never found out their names, but they assured us a tent was much cosier and comfier than a bothy and they were probably correct.
The next day was not particularly lovely. we had intended to go up Ben Macdui, but the cloud was down when we reached Loch Etchachan and it was a thoroughly grotty day, so we decided instead to turn round and go over the top of Beinn Mheadhoin to spend the next night in the Fords of Avon Refuge. Looking towards Loch Etchachan from the southwest with Bheinn Mheadhoin behind. this was the point at which we decided to turn round and go up beinn Mheadhoin instead though by the look of this picture it can't have been that far to go to the top of Macdhui.

It was fairly cosy in there as people kept arriving and by bedtime there were nine of us! that was the only night out of four that we had any bothy company. It was certainly not chilly that night. looking out of the Fords of Avon Refuge The Fords of Avon Refuge was built in 1970 and was in good condition when we were there. It did fall into disrepair later and was happily rebuilt last August by a gallant crowd of folk and is now back to its former glory.
The next day was much better and we headed up the banks of Loch Avon, over the Saddle and up to the top of Cairngorm with great views. Me at the Saddle looking north into Strath Nethy. I still have that shirt. I still wear it sometimes, usually for decorating or gardening. Our destination for the night was Ryvoan Bothy. This was our favourite bothy of the trip as it was fairly draught free and had a nice comfy wooden floor.
It was in a lovely spot too. 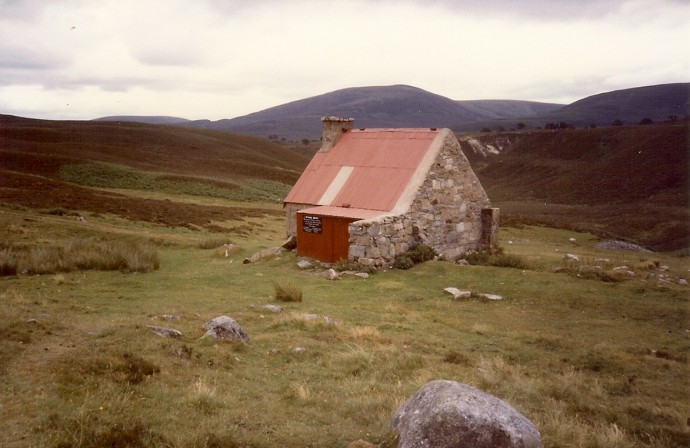 No. not morning already! wee bro on the right with his karrimat wrapped round his waist. Look at the lovely old fashioned sleeping bags. mine on the right is the most modern.

The next day was the purpose of our trip. We set off from Ryvoan and went up to a summit, I didn't remember which one but I posted the picture on the general forum and Gaffr tells me it is Meall a' Buaichaille. From there we went through the Ryvoan Pass and the woods around Loch Morlich, through the Chalamain Gap and into the Lairig Ghru. summit of Lairig Ghru. There were bluebells growing here I remember, although I didnt manage to get a good photo of them. the Devil's Point visible through the pass.

this was a fabulous day. we stayed that night at Corrour, which as you will see was only half the bothy it is nowadays since the addition of the toilet facilities. I think it has been much improved since we were there by the addition of panelling, but the window sill was very handy for our stove. Corrour Bothy with the tent of Mr and Mrs Beanfeast again. 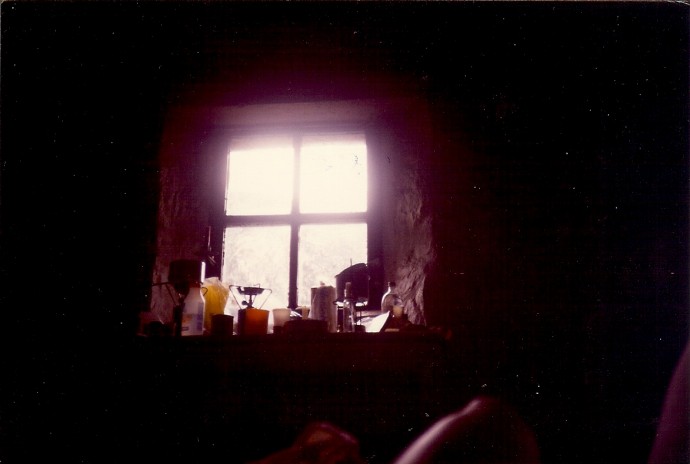 the next day was our last and we took our walk back via the Dee back for a nice shower and a comfy bed at Inverey again before heading back to Braemar and the bus. Our John at Chest of Dee, in his big jumper and short shorts. I think he was looking at fish. Hurray now we can have a shower. Inverey Youth Hostel, it's now a private house.

As we walked in to Braemar we were passed in the opposite direction by a Landrover to whose occupants we waved in a friendly manner, as one does in these parts, and they waved back, as one does. My wee brother piped up "That was Prince Charles and Princess Di we just waved to"
Well fancy that!!!
Nowadays I snap away with my camera the whole time, but then I was very careful not to waste film. I'm so glad for my waterproof digital camera these days as I think I get better pictures, mostly because I can take dozens!
Hope you enjoyed this blast from the past.

Ah! those innocent carefree days of our youth

Love this report, memories of young people enjoying the outdoors. Well done to all of you

Ps No one is laughing at your pictures, I like them. I also remember tin mugs (and plates and bowls), also these sleeping bags and rucksacks.
By the way, Charles and Di might have stopped to offer you a lift

mrssanta wrote: Nowadays I snap away with my camera the whole time, but then I was very careful not to waste film. I'm so glad for my waterproof digital camera these days as I think I get better pictures, mostly because I can take dozens!
Hope you enjoyed this blast from the past.

Enjoyed it very much! I for one think your photos are great and capture such wonderful memories. There's something so evocative about those 80s clothes and hair styles!

Interesting about waving to the Royals. Having climbed the Cairngorm in the 1930s, my mother and her friend tried to hitch a lift back to Aviemore station. They thumbed an approaching black car which when it got close enough they realised was flying the royal standard and inside was no less that the king himself!

He didn't offer them a lift but he did give them a very nice wave!

Then in 1981 a friend was walking along the side of Loch Muick and met Charles and Di. He said he had wondered why he was being watched by individuals with binoculars on his walk over from Glen Doll! He said Di seemed so child-like, dancing along the path in front of the more sedate HRH - an astute observation considering how that panned out.

Thank you , I enjoyed that very much , a fine array of knitted garments on display

That was wonderful! Sounds like a great trip - love the jumpers!

Mr and Mrs Beanfeast had good tastes, not only with food choice, but with their tent.....plenty of room for five in one of these Domes when you leave behind the inner tent

What a great report,love the photo's. I can spend hours looking at old photo's,they always seem to have so much more character about them. Some quality knitwear going on there too.

Here i stil use a karrimat and a tin cup ,i also have a day rucksack that my mate told me looks like something Tom Weir would have

Lovely report, you had the same tent as myself (an Ultimate Equipment - Phazor Dome). It was my attempt to go lighter than a Force 10......

Enjoyed this blast from the past.

At times i wish i had found the hills in my younger days...but i'm making up for lost time.

Bet your glad yous kept them shirts and jumpers...retro is all the rage now

Brilliant reflection. It took me back.... I did my Gold DofE there 1978 and your pics brought back memories of gear, hairstyles and the invincibility (and naivety) of youth.
Loved it. Thanks.

Thanks all for all your kind comments. Glad you enjoyed my reminiscences.
Gaffr, maybe it was you who was Mr Beanfeast!

My brother still has that fair isle jumper which he wears when he is on holiday.
And my red socks were knitted by my own fair hand, I have them still, but I don't wear them much as loop pile ones are much comfier.

fantastic report mrssanta. Just love the photos with the fashion of the day